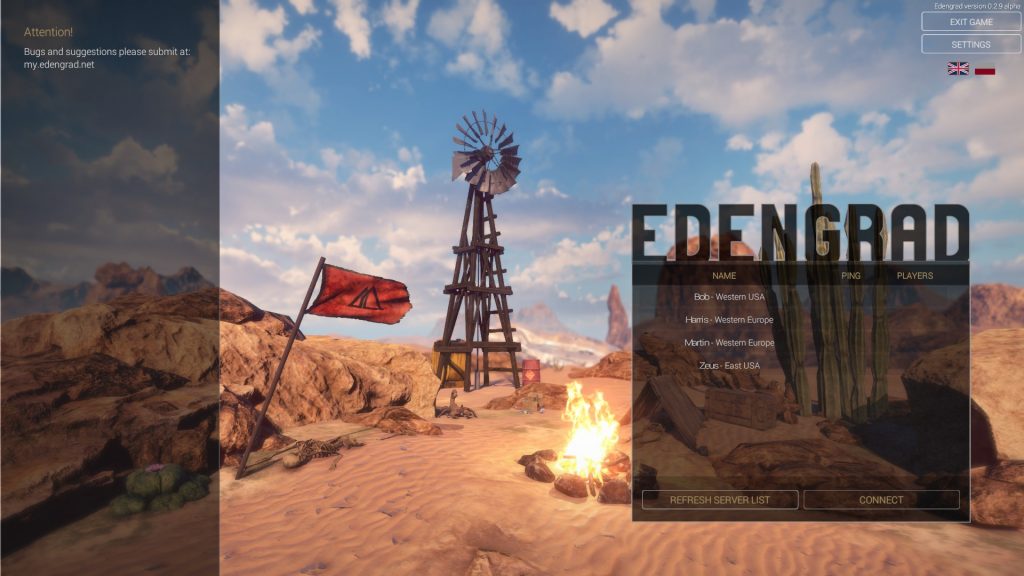 As I was scavaging in Edengrad, I walked into an area of mutated humans which looked like zombies, but while I was scouting the place out this behemoth of an AI enemy came out of a building…

It came out and was called “Limp Joe” and whilst it was towering over its other AI mobs, I was just in awe at something so big, and the realisation that I wouldn’t last two minutes against something this big and mean, even with my 8-12 damage machete..and that’s the “thing” I like about Edengrad. The unknowing, and the scale of the game, where even keeping your hunger and thirst up on this I found enjoyable. 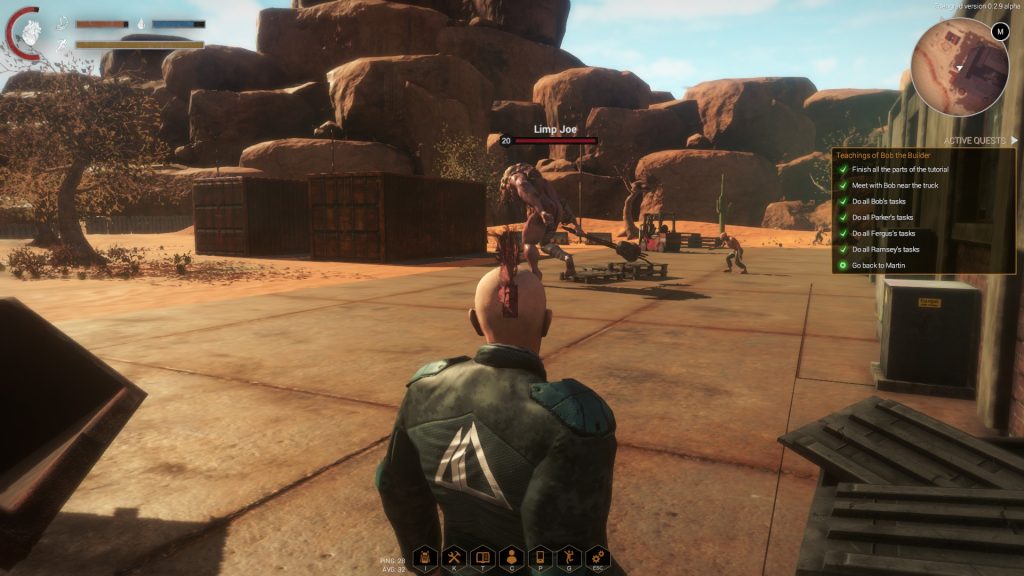 On may, 18th 2016, the project launched on Kickstarter and with a goal of £39,000 being asked, the Developers (Huckleberry Games) succeeded with a total of £41,535 by 128 backers, which bemused the supporters at the time, as the servers had terrible pings at the start of the journey in the early life of Edengrad, which I can gladly say now is fine as I play on the Harris server, which I’m guessing is hosted in Poland as that’s where the Developers are based. 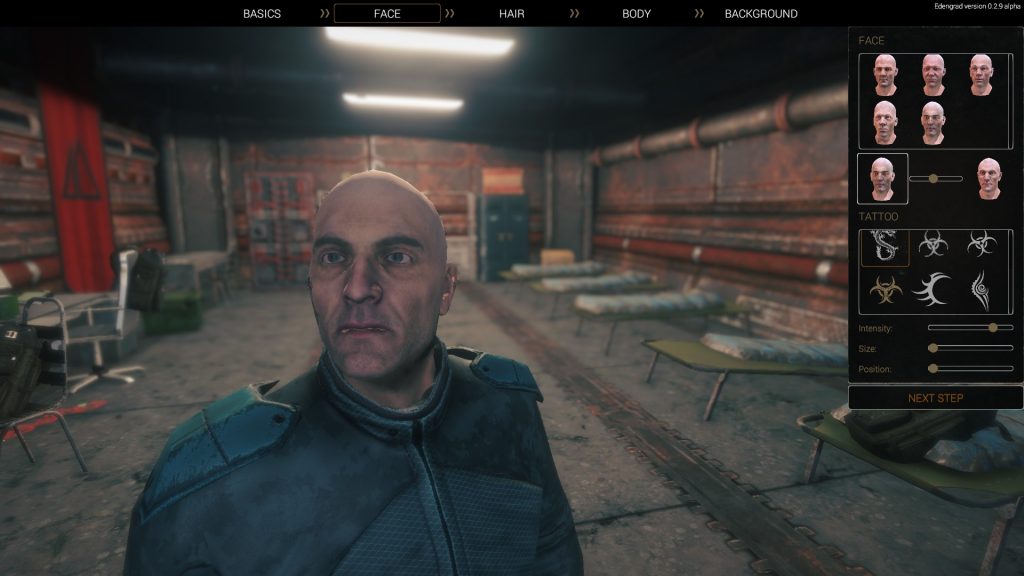 The character creator as with all MMO’s has plenty of options on how to make your character look unique, although you can’t make a female character just yet but you can make your character tall, short, fat, thin, and have tattoos or not, as well as hair styles or being bald if you prefer, and the same goes for facial hair, and scars, The system is very robust, even in this present alpha.

Once you’ve done all that, you then you get to walk about in the bunker, which seems a lot like the later Fallout games (the FPS ones) but you get to explore the bunker and follow the quest trail to go outside, which is where it all happens. With an in-depth tutorial when you meet up with “Bob” who shows you how to combat, farm, craft and build, but it was at the end of the quest line where it had me stumped as I couldn’t for the life of me find “Martin”. I knew he was in the bunker but I found no obvious way of getting back in ’till I found out I had to talk to an NPC waiting outside to get back in, so I hope they add a small talk to “Andre – the Gate Guard” NPC so others know how to re-enter the bunker and finish off that quest line by talking to Martin as it opens up a lot more. 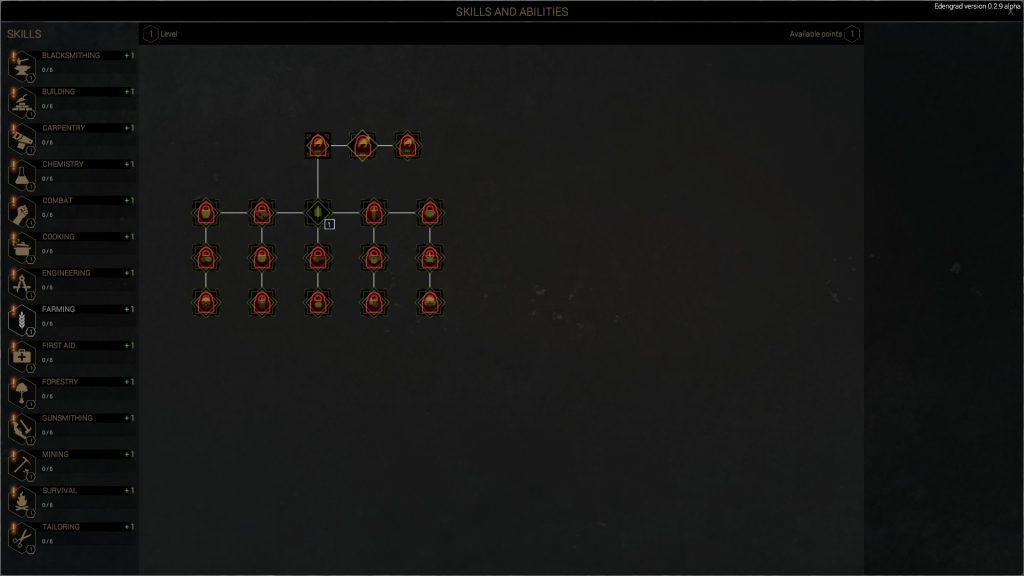 Edengrad lets you do near enough anything you want, there are quests to do, base building, organisations to create at level 5, plus 1500 UGC (in-game currency) or join whenever you like, but you need to type into a search bar. These organisations are just like guilds in other MMO’s but to earn experience to level up it’s not all about grinding mobs all day long, although you can if that’s your thing, or if you like you can do quest lines which mainly compromise of killing “X” amount of whatever, or just kill whatever is guarding the place you’re sent too, but there are quest markers on your mini map to show where you need to go.

There’s also the crafting which you unlock with the more you do in that respective category, so the more mining you do the more diverse elements and materials (ore) you find whilst mining, and there are 14 categories in the “skills and abilities” window but each different thing costs a different amount, ranging from one point up to the likes of eight points to learn different things, here’s the rundown. 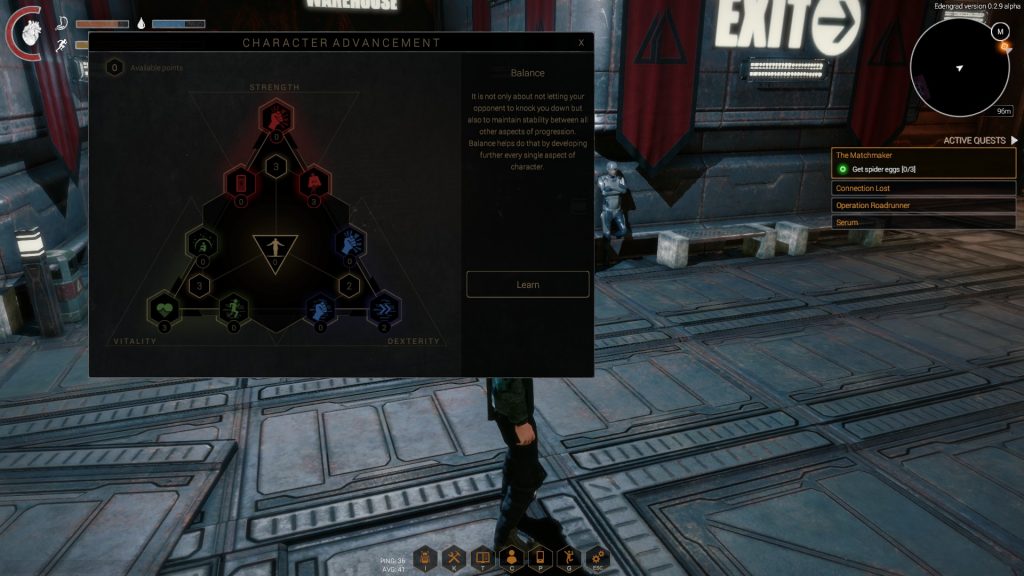 Whilst you’re doing all that you’ll be earning experience for your character when once levelled up you have points to put into three different categories with three different subcategories to put your two points into which they are buffs you always keeps; 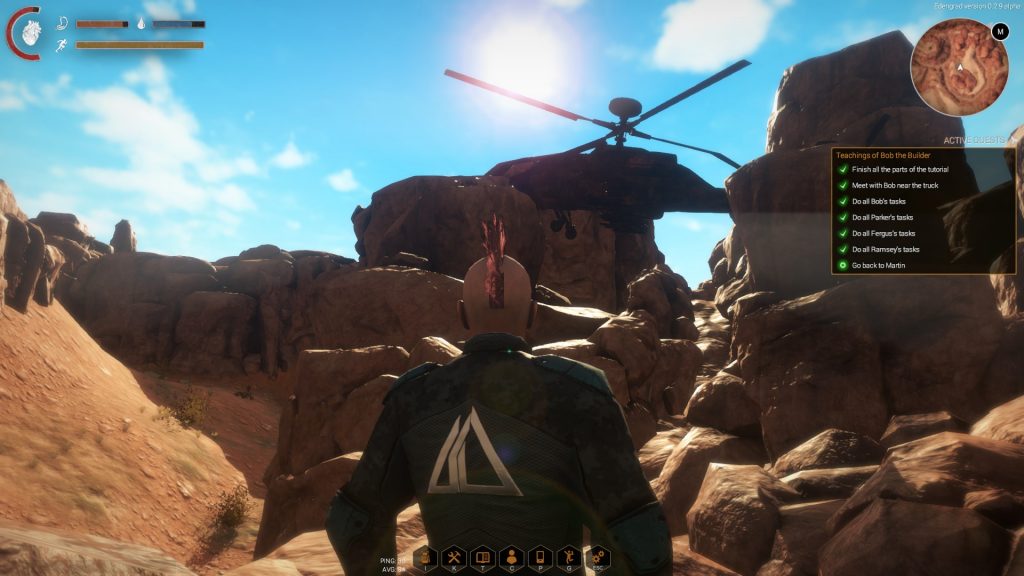 Whilst it’s still in alpha, you can still tell that it’s early in its life, there’s no shop NPC’s (how are they still finding things to consume and to live off?) and there’s no faction data just yet, maybe some quest lines give you +reputation or something in later patches, also every few days when you don’t rest up, your energy bar gets shortened so you get less to use, and without energy you can’t run, craft, jump, mine, and even swing a melee weapon; but the thing is though, you only get it back if you sleep in a bed, or level up. The problem is, there are no safe beds to sleep in, not even in the bunker, so if you’re too low level to craft a bed or need a lot of exp to level up, you’re gonna struggle a lot.

Some quest lines don’t have markers on the mini map like “serum”, which is maybe because the place you need to go to hasn’t been created yet, but for the amount of work that has been put into it £9.99, it’s definitely worth it. Heck I even bought a copy for a friend on Steam to support the developers “Huckleberry Games”.

If you like these kinds of games, at least keep an eye on it and see where it goes, also dev’s if your’e reading this, please make the combat a bit more fluid as it feels very clunky right now and maybe a hot bar say on the left-hand side of the screen going downwards as pressing “I” to change to a pickaxe, axe, weapon, gets a bit annoying.