Law Mower reminds me of games of yesteryear, with all the same fun and problems included.

When I saw the trailer for Law Mower, I thought it was going to be wacky kind of fun. Taking a mundane task and adding a healthy dose of insanity. Examples like Viscera Cleanup Detail, Job Simulator or Worms to a certain extent. The trailer shows you mowing grass and avoiding rockets, dogs, and just about non-stop gore and explosions. Which is great and sold me on the premise. After playing the game for about an hour though, I quickly realized that this was actually more about mowing grass and avoiding obstacles. Which is fine, but gets tedious.

Honestly, I think if Law Mower had come out in a different time, this game would be beloved. It has the same level of enjoyment of games like Dig Dug, Pac-man, and Paper Boy. My problem was that my tastes have evolved and those games don’t hold my attention for that long anymore. It doesn’t mean the game is bad, but just not what I was expecting

The joke of rockets/mowing dogs over gets old really quick and you realize that’s kind of their only gag here. Which isn’t all that funny, but to be fair humor is subjective. Let’s get the motor running and mow us some features. 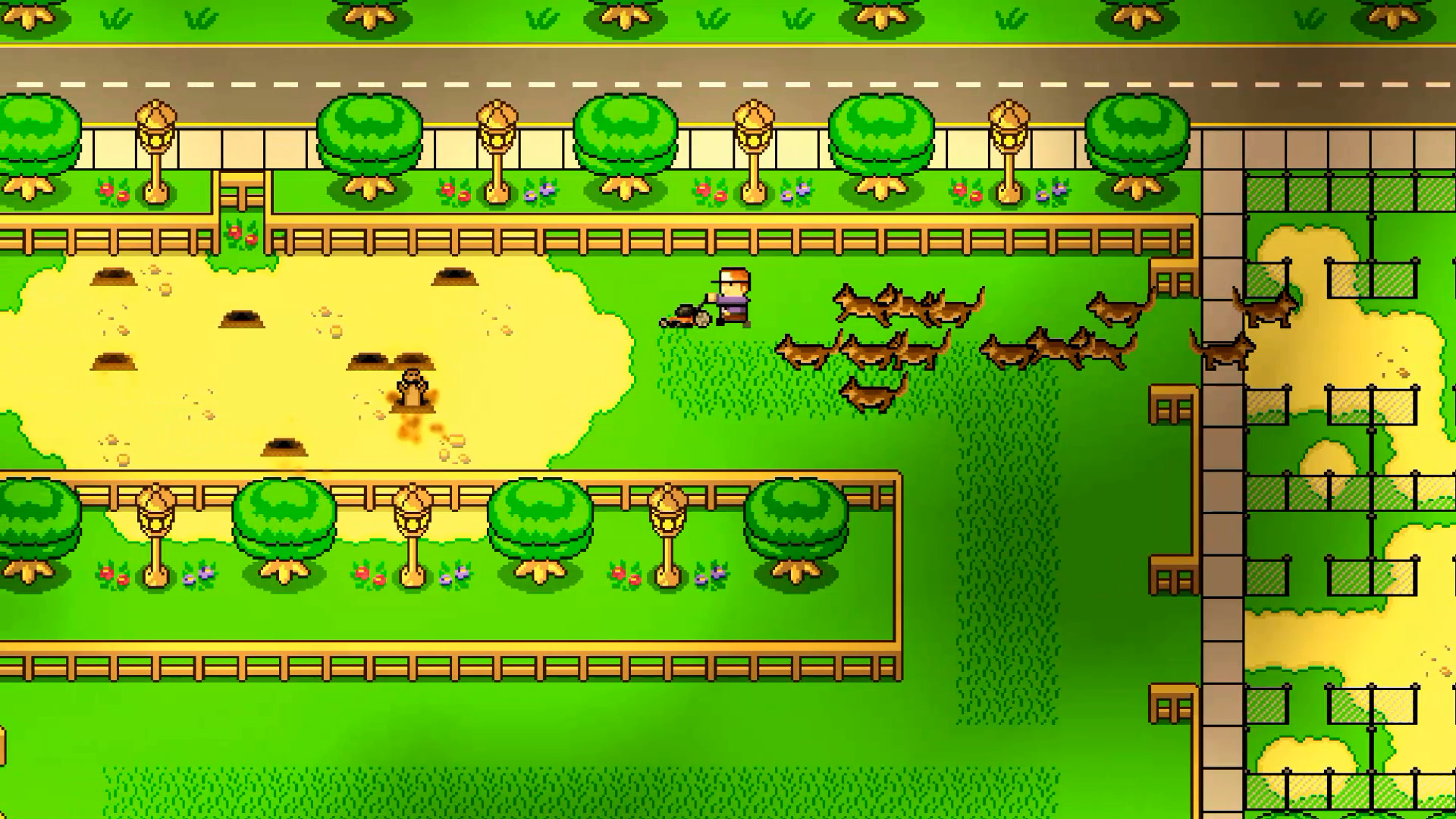 Lawn mowing is about as simple as it gets.

Like the aforementioned games, Law Mower is simplistic. Your objective is to avoid hazards and mow everything and its mother. You have forty five levels to mow your way through with six varying degrees of difficulty. The difficulty changes the amount of hazards you can expect. You might have one dog or twenty chasing you. 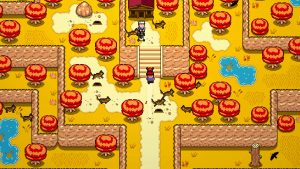 Controls are the first issue I had trouble with. This game isn’t very controller friendly which is a downright shame. This meant I had to use keyboard, which seemed to not respond very quickly. Another thing that took a bit to get my head around is that your focus isn’t on the little guy but the lawnmower in front of him. In a way, your human half is just a tail that you need to protect. It took me a while to get my head around that and led to quite a few deaths as it just felt odd.

The level designs are varied and change the placement of buildings, fences, grass and weeds. I couldn’t help but notice though that some of the levels were re-used, just with added hazards or palette swaps. Hazards come in the form of birds, gophers, dogs, rockets, and even other lawn mowers, err sorry, Law Mower’s. Each level comes with the same three objectives, pass the level, don’t die, and beat it under par. Manage to do that and you are rewarded with three stars, which screams mobile port to me. Some people like that kind of thing but it didn’t add any value to my experience. Those who love speed running though should have a good time maximizing the best paths to beat the level. 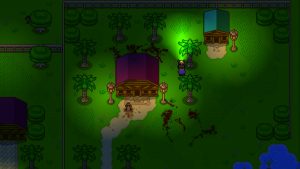 Like games of yesteryear, you die in one shot from anything. Lose three lives and its start over which can be downright frustrating. Some of the levels are rather big and you only mow one square at a time. Meaning you will spend most of your time meticulously trying to catch every single piece of grass or otherwise be doomed to back track for twenty seconds. Die, and its do it all over again in a painstaking fashion.

There is a boost button that gives you a bit more speed, which I used every chance I got, but has a bit of a cooldown. Movement already being a bit of an issue though, boost tended to end me up placed against a wall, tree or fence. Finally, the pixel art of the game sometimes covers up grass. You end up thinking you mowed everything only to have the “Grass detector” pointing you in the direction of a tree.

That sums up the “Campaign” of Law Mower. There are not any upgrades or locked features to speak about. The game does come with cheat codes, which I found refreshing in style. Infinite lives, unlock all levels, etc. In all, the gameplay is fine but just has the same caveats games of yesteryear had. It wasn’t as exciting and silly as I had hoped.

Surprisingly, there is a multiplayer and map editor. 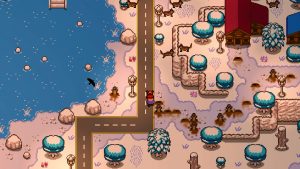 While I couldn’t find any other players to play with I did have quite a bit of fun with bots. Law Mower’s multiplayer lets you play levels cooperatively or try a myriad of versus types including deathmatch, capture the flag and team battles. One rather humorous moment came when I put sixteen bots into a capture the flag level and suddenly my explosion and gore filled dream came true. Oddly though none of the maps are big enough to support sixteen players. You sometimes end up exploding on spawn, which in fairness was also hilarious to see.

While I didn’t test the map editor. It is always a nice feature to have so you can make your own levels. Perhaps I could’ve made a level big enough to support sixteen players.

Multiplayer was the only time that I got to see the kind of action/fun that I wanted. Something that makes a mundane task like mowing the lawn entertaining.

When there is an explosion or a dog does get munched it looks and sounds good. 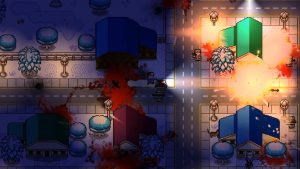 Strange sentence aside, Law Mower has nailed a good style when it comes to graphics. The pixel art is adorably simple and vibrant. While I am not a huge fan of color swaps, it is used effectively to change things up every so often. When there is an explosion, you feel the oomph of said explosion. The gore does tend to cover up the grass a bit which can wreak havoc on completing a level. Also I would’ve enjoyed it if the story was given in a more fun way then just plain old text boxes. Otherwise no complaints on the graphics front.

I do want to mention that sweet, sweet lawnmower sound. Every time you get a good buzz going the sound effect that comes along with it is satisfying. Although there is a deathly silence from your gas guzzling machine when your not mowing. Music itself is par and was pleasant enough to listen to without turning the music down.

One thing is for sure is that Law Mower is unique.

While your mileage may vary with this title, you are getting quite a bit of content. Forty five levels, map editor and multiplayer gives you hours on end of hot lawn mowing action. Replay value is huge here obviously as the game is built for it. If you can get a group of friends I highly recommend checking out the multiplayer cause it’s stupid fun.

I think retro fans or people who love old arcade games are going to get the most out of Law Mower. It reminds me of games like Burger Time and other old odd NES games. You don’t see those types of games much anymore. For that, I give kudos to the developer as it captures the gameplay perfectly. Law Mower may not have been what I was expecting but it delivers the one thing it promised. There will be grass, and much mowing to be done.

Oh and I hate the birds in this game. They are awful.