Herald is a point-and-click visual novel set in an alternative 19th century timeline, alternative 19th century timeline in which the monarchy has been overthrown and the ruling power are called the protectorate. Your job is to deal with the day-to-day conflicts aboard a merchant vessel – the HLV Herald – to ultimately discover your own story, as well as those of your fellow passengers; making decisions which influence the outcomes of your playthrough and influence the lives of everyone involved. 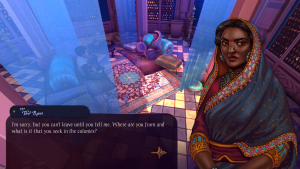 You play as Devan Rensburg and begin the game, having been rescued from the sea, in the colonies as a prisoner of a mysterious woman named The Rani. She will not let you leave without telling her why you are which is difficult considering you don’t really remember. You are asked some questions about your motives which is immediately jarring as a player, as at this point, you have no information other than some of the possible responses are indicated as lies. Luckily, the Rani has found your diary, so you’re about to discover a whole lot more about who you are and how you’ve come to be where you are now. As the real story begins you are transported back to your first day on board the Herald to begin your voyage.

Although the game markets itself as a point-and-click adventure game, which I suppose is technically true, it does not really fit in with the typical structure you would expect from this genre, for example, there is no verb system and there aren’t really any puzzles to solve; I never really had to work hard for anything. Tasks are generally given to you by other characters and ‘puzzles’ are easily uncovered and solved by talking to the people on board. It quickly becomes clear that this is more a game of exploration and story-telling than puzzle-solving; a point-and-click visual novel. 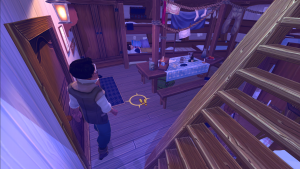 The set-up of the game comes in ‘books’. So far, only books 1 and 2 are available at around an hour’s worth of gameplay each. The books contain their own story arch, punctuated by bringing you back to your current imprisoned state and follow on from each other to contribute towards the overall story.

In the first book, your main aim is to uncover as much information about the ship and its crew as you can. As you begin to encounter more characters the story fills out a bit, switching between first person interactions and making observations about inspected objects in the past-tense you feel both the involvement in the story and are reminded of your current position as prisoner of the Rani.

The story is a compelling one with many surprising twists and turns, during which you begin to uncover an odd relationship between two crew members and the makings of a larger, potentially nefarious explanation behind the Herald and its current journey. The game does not pussy-foot around fairly hard-hitting issues such as death and suicide, intermingling them with everyday ailments such as sea-sickness. 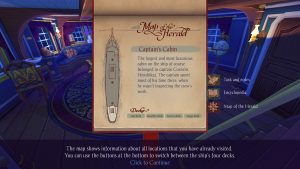 Each time you meet a new character, interact with a new object or visit a new area of the ship information is added to your diary. This acts as inventory, quest log and information store for the rest of the game. I found the map of the ship particularly handy to start with, as characters ask you to go to certain areas without really indicating where they are. There is also a helpful mechanic which locks off areas that are currently inaccessible or not currently required which means you can’t stray too far off course.

As well as an intriguing narrative and great voice acting, the artwork is beautiful. The environments you play in are intricate and well-implemented, and the close-up character art during dialogue is excellent. Unfortunately the 3D character models used for moving around look poor in comparison. The music is well integrated with the environment and the mood, and there is an original song sung by one of the characters during book 2 which I really enjoyed. It’s great to see a relatively indie game using more than just stock music and using it as part of the story.

The main pull of the game, for me, was the promise that your decisions directly affect the story. Indeed there is a warning as you boot the game which instructs you to ‘choose wisely’. I played books 1 & 2 through twice, the first time choosing options that were natural to me, and the second time choosing the options that were as different as I could. Disappointingly this resulted in very little change to the story at all. The reactions from other characters during dialogue almost stubbornly stick to their guns despite the answers you give them. This is a massive shame as it should be the main reason for going back and re-playing the game. I’m hoping that this will have larger effects in the later, as yet unreleased, books. 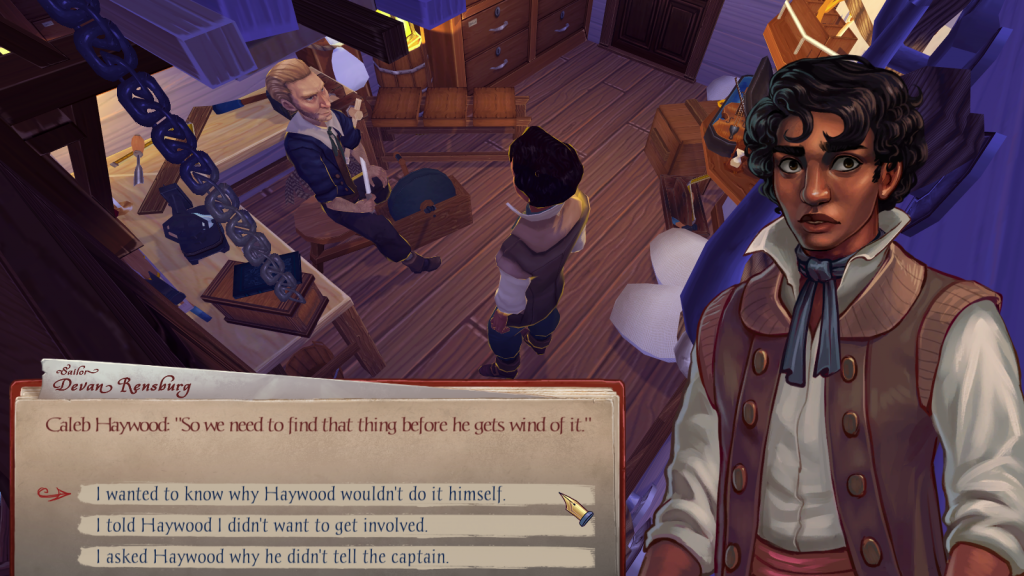 A side-effect of multiple playthroughs with different choices was finding that later dialog no longer made sense when certain decisions were altered. For example, dialogue about you taking a long time over a task and investigating a room thoroughly is used even if you didn’t investigate and completed the task as swiftly as possible.

So far, Herald looks to be a promising series of mini-adventures. With a captivating and innovative story and attractive visuals the game is a pleasure to play and is a great way to spend a few hours. The ability to make choices which all feel realistic and valid serves to emotionally involve you in the outcomes of the characters you meet. It is unfortunate that, as yet, they do not seem to affect the overall story too much, however I’m hopeful that this will change with later book releases.

EDIT: An update released on 30th March 2017 adds controller support along with a few minor changes such as additional music, and tweaks to some of the dialogue logic.