Not four score, but seven days ago, I finally got to try out Shenandoah and Slitherine’s new Civil War game: Gettysburg: the Tide Turns.

While a lot of games about the Civil War cover the entire war, this one focuses on one important, three-day battle. One might think that a limited battlefield, within a predetermined and specific amount of time, might hinder the replayability of a game.

However, I will tell you (probably ad nauseam) why this is not the case with this game. Most turn-based wargames specifically implement an IGOUGO or WEGO system for turn resolution. While Gettysburg: the Tide Turns is basically an IGOUGO system, it employs a huge wrinkle: I never know from one phase of a turn to the next which units I will get to move! It is the same for the opponent. 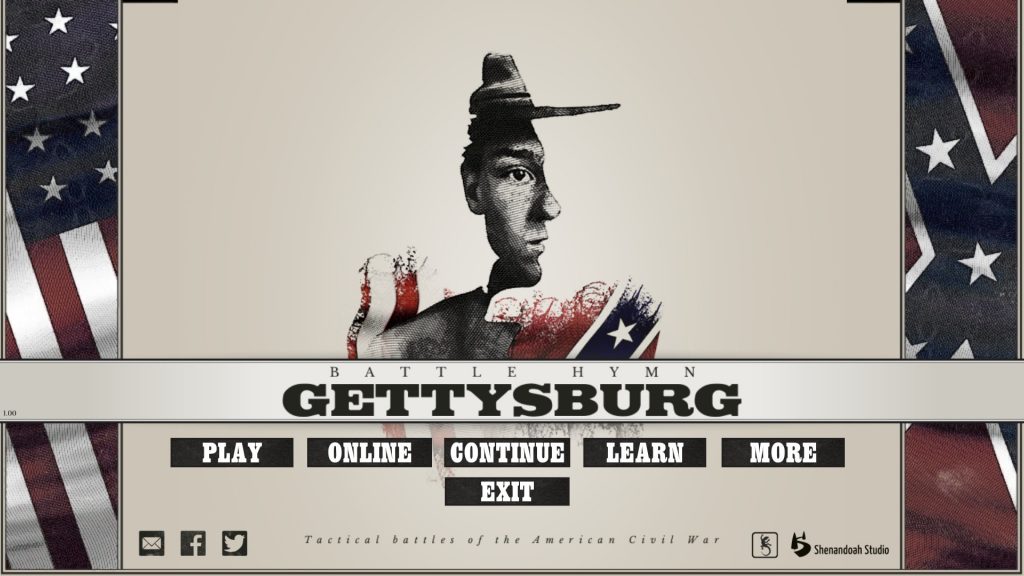 Each ‘day’ is a certain number of hours during the daytime followed by (fewer) hours during the night. Each day then is comprised of phases (game turns) representing one or more hours. Here is where the real fun starts! Both sides (U.S. and Confederate) wait for the “Activation Chits” to be selected. These chits determine which units can or cannot move, or go into combat, for that specific turn. The replayability comes from the fact that the draws are all random!

After the chits are drawn, but before the turn actually starts, Initiative is also determined—which allows the side with initiative to select when to play their combat chit, if drawn. If mine is drawn and I play it, then I am the attacker. If theirs is, and they opt to play it, I defend. Combat happens twice per turn, once for each side. Combat phases are in a specific order and range from defending cavalry screening all the way to attacking units’ possibly advancing into deserted hexes. Once all finished, the game updates the Victory Points for each side.

The graphics for Gettysburg: the Tide Turns are very simplified, while the whole game takes place from an overhead viewpoint. There are 14 different terrain types, each of which affects units with a movement cost, a combat to-hit modifier, and whether or not the hex blocks line of sight. The four unit types are Infantry, Cavalry, Artillery, and Horse Artillery. Rectangles are Infantry, a triangle-topped square represents Cavalry, etc. The number of the units displayed within each formation is a literal representation of the number contained within it. Each unit has Strength Points, specific Movement Points, and a Quality rating. Obviously, cavalry can move the furthest per turn and artillery the least. There are six different Quality ratings that range from “Raw” through “Elite+”. If I lose a unit, I cannot get them back. However, if a specific unit gets demoralized, it can (possibly) be rallied. 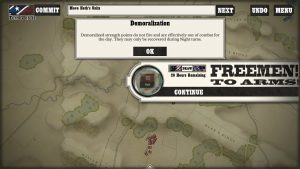 Gettysburg: the Tide Turns is easily a jump-in-and-play type of game. Every time I run across any kind of new game mechanic or information, a screen pops up to tell me what is going on. After I played my first campaign about halfway through as the South, I started a new one as the North to see if I would still get the same information screens. Three turns in, the only new information I got was about my horse artillery, which was new to me as I had not seen it while playing as the South (as far as I went in anyway).

Another handy feature is that every time I select an artillery unit, a box at the top of the screen reminds me that if I press and hold “G”, not only will it show me the hexes that unit can possibly bombard, but also the range it has for every possible hex move I can make to during that turn.

Suffice it to say that the added layer of waiting for chit activation to occur can drastically alter my strategy from turn to turn. I may have an overall approach to the hill, but if I get units that do not come up for movement for some time, I will have to adjust my battle plans accordingly. Reinforcements are known in advance for both sides (simply check the calendar) for which turn they will occur, however they are subject to coming up in the chit activation sequence as well. I know which turn I will get them, but as with every other unit, I just do not know exactly when.

Gettysburg: the Tide Turns may be simplistic graphically, but there is quite a bit going on under the hood. After a few very minor bugs at release, Shenandoah and Slitherine seem to have gotten everything ironed out. Not long after it became available, they had already set up a tournament! While I may not be ready for that just yet, it is good to know that it is already to that level of competitiveness. I never experienced any crashes or turn freezes. The first thing that I have to do (as the South) is go back and see if I can claim the rest of the victory points from the hill. Then, I will turn my attention to my U.S. game and see if I can keep the Rebels at bay.