Review | Galaxy of Pen and Paper

Who needs elves, magic, and fantasy? Its time to switch things up and play Galaxy of Pen and Paper!

I have roleplayed for two decades of my life. I have been a Super-Hero, Jedi, Elf, Orc, you name it and I’ve been it. There truly is nothing quite like having a group of pals, some dice, and way too much time on your hands. Unfortunately, as you grow up that changes, you have less time than you had. Buddies move or get married and have kids, life happens. If you find yourself looking for some of the humor and charm of roleplaying but can’t actually roleplay then Behold Studios has you covered. Galaxy of Pen and Paper is our campaign today and its packed full of charm, pop-culture references, and plenty of geeky dialogue.

If the Pen and Paper sounds familiar that’s because this is a spin-off of Knights of Pen and Paper. Behold studios are also the minds behind Chroma Squad, which is a hilarious “behind the scenes” of the Super Sentai genre. I highly recommend checking that game out as well. Personally, what I love about the developers style is how they deconstruct themes and tie them fluently into an interesting game. Making a game about a game, within a game, sounds way out of the box. Their style is prevalent in Galaxy of Pen and Paper, as you construct your own GM, party, and even choose how the adventure twists and turns. 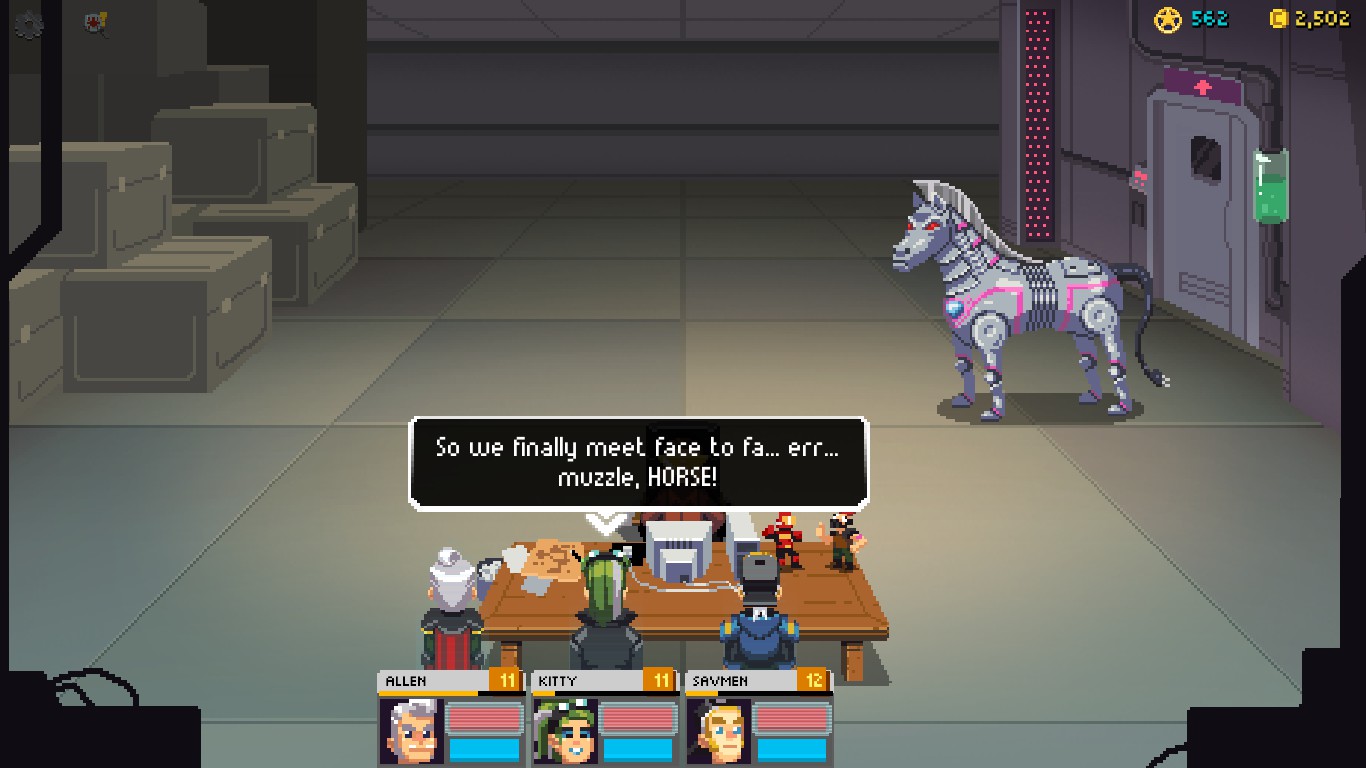 Space the final frontier, these are the voyages of some geeks and their GM.

This part immediately let me know I was in for a good time. The choices for GM are really cute with a variety of different outfits from some very familiar pop culture references. Yes, I dressed up my GM as a Browncoat from Firefly with gold 80’s sunglasses. I could’ve dressed him as a Jedi or Sith though, so hard to choose! 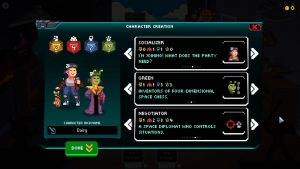 On the flip side party creation isn’t as robust, sadly. You choose class, race, and personality/player this comes with a pre-generated sprite already in place. While it isn’t hard to make a unique party from the variety of combinations. I would’ve loved to see the same level of customization from the GM go into players. At start, you have four classes, three races, and eight players, with the option to gain more as you progress in the main game.

While I loved the design and how unique each class was, there was times I was a bit confused about what some of the classes did. You have obvious choices like Trooper, which I thought was a long range fighter but acts more of like a tank. Then you have Gadgeteer which is described as “Hacks into mechs, lifeforms, the game…” This is mostly a damage over time type of class and seems fairly weak. Skills/class abilities work off each other fairly nicely, once you figure them out. There are four more classes you can unlock that are a little more obvious but that is after you start your first game.

Each aspect of the character creator comes with its own pre-assigned stat values as well. Meaning that for optimal damage/stats you may be forced to choose one personality/race/class over another. Not my favorite thing in the world, but to be honest, the game isn’t too difficult so no big deal. Make who/what you want. 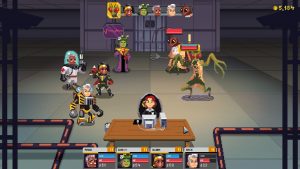 Combat is your standard RPG affair with the added Pen and Paper style of your choosing. Do you want to face five thugs for extra rewards plus a little challenge or take it easy and kill one or two. You also have different varying degrees of enemies, including elites and bosses. The major difference between Knights and Galaxy of Pen and Paper is that your party is more visible as they show up on the left side of the screen with party placement you can change. This for me was a welcome addition and I loved seeing my party kicking butt.

When not on a main quest or kicking butt on the ground you have the mission creator. This allows you the player, to create an assortment of different activities for your party to engage in. You can set up a campaign, hunting, intercept, collection, escort, and class quests. Most of them are exactly what you think they are. The unique one for me was the Intercept quest, which is all about ship on ship combat. This is another new addition for Galaxy of Pen and Paper that plays out similarly to ground battles but with a giant ship instead. You take turns blasting each other while charging your ships battery by rolling dice which start off as a D4. The dice, which charge your ship, can be upgraded as you progress through the main campaign. 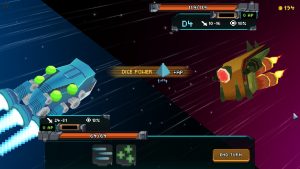 Each mission comes with a variety of contacts and planet choices to accompany them. It’s a neat system and I definitely felt like I was crafting my parties adventure even if it felt slightly generic at times. As you complete missions you gain reputation that give innate bonuses to your whole party.

From a technical aspect, I did run into a couple of bugs, but the developer did fix them fairly quickly after I reported them. That kind of full support is something I love to see.

Galaxy of Pen and Paper is fun space science fiction.

The setting of the game is by far its biggest selling point and Galaxy knows it. From insane robot horses, to a chain gun wielding troll named Ginormous, Galaxy just hits the nail on the head when it comes to style and aesthetics. If you’ve played games like Doom & Destiny, then you can expect the same level of banter and roleplaying quips. These are going to make you smile and even laugh sometimes. 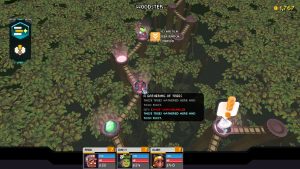 Supporting all of this, is wonderful pixel art. There isn’t a single negative aspect to the art of this game. Every city, world, and monster are all attention grabbing and look really detailed. While the combat animations are fairly simple they do get the job done. I would’ve love for them to have more oomph to them but that’s a personal preference. If you enjoyed the feel and design of its predecessors then you are going to love Galaxy of Pen and Paper.

The music certainly takes center stage as Behold studios knows how to make some tubular music. Yes, I said tubular. The soundtrack is a Casio lovers wet dream to say the least. There is some really awesome tech music here that you can just sit and enjoy. I never got tired of listening to the main menu theme, which sounds like an 80’s Saturday morning cartoon. It’s freaking great. I hope that the soundtrack is sold along with the main game, as they knocked it out of the park.

Our Campaign is coming to an end. 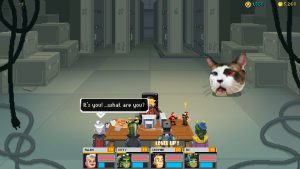 When it comes to replay Galaxy of Pen and Paper has oodles. After your initial run of the game is complete, you have access to all sorts of new classes and can change all the decisions to see how the story changes. Considering how I got a good eight to nine hours in and still hadn’t hit the end, that is telling. You’re going to get plenty of play time out of this title. Galaxy of Pen and Paper does feature Steam achievements and cards. No controller support but it really doesn’t demand it.

I throw my recommendation behind this game. Primarily because of the developers reputation. They fixed my first problem as soon I reported it. Second reason is that I love games that pay homage to roleplaying. Galaxy of Pen and Paper made me feel like I was hanging out with the guys and being a goofball. If that isn’t mission accomplished, I don’t know what it is.

When it comes to being innovative, Galaxy of Pen and Paper could use more. It’s a standard RPG with a great theme. I would’ve loved to see the space aspect explored more. I wish it had something to make it a bit more unique. What that may be I couldn’t say, but I did feel it missing. Nonetheless, this game will take up a good amount of your life and keep you entertained for hours. So go check out Galaxy of Pen and Paper!

As always be sure to come back and check out B3 for all your gaming needs! Thank you!