Bending the Rules and the Ball in Behold the Kickmen

Behold the Kickmen, the latest title from Size Five Games (The Swindle, Ben There Dan That) takes football by the shoulders and rattles it around until most of the boring has fallen out. 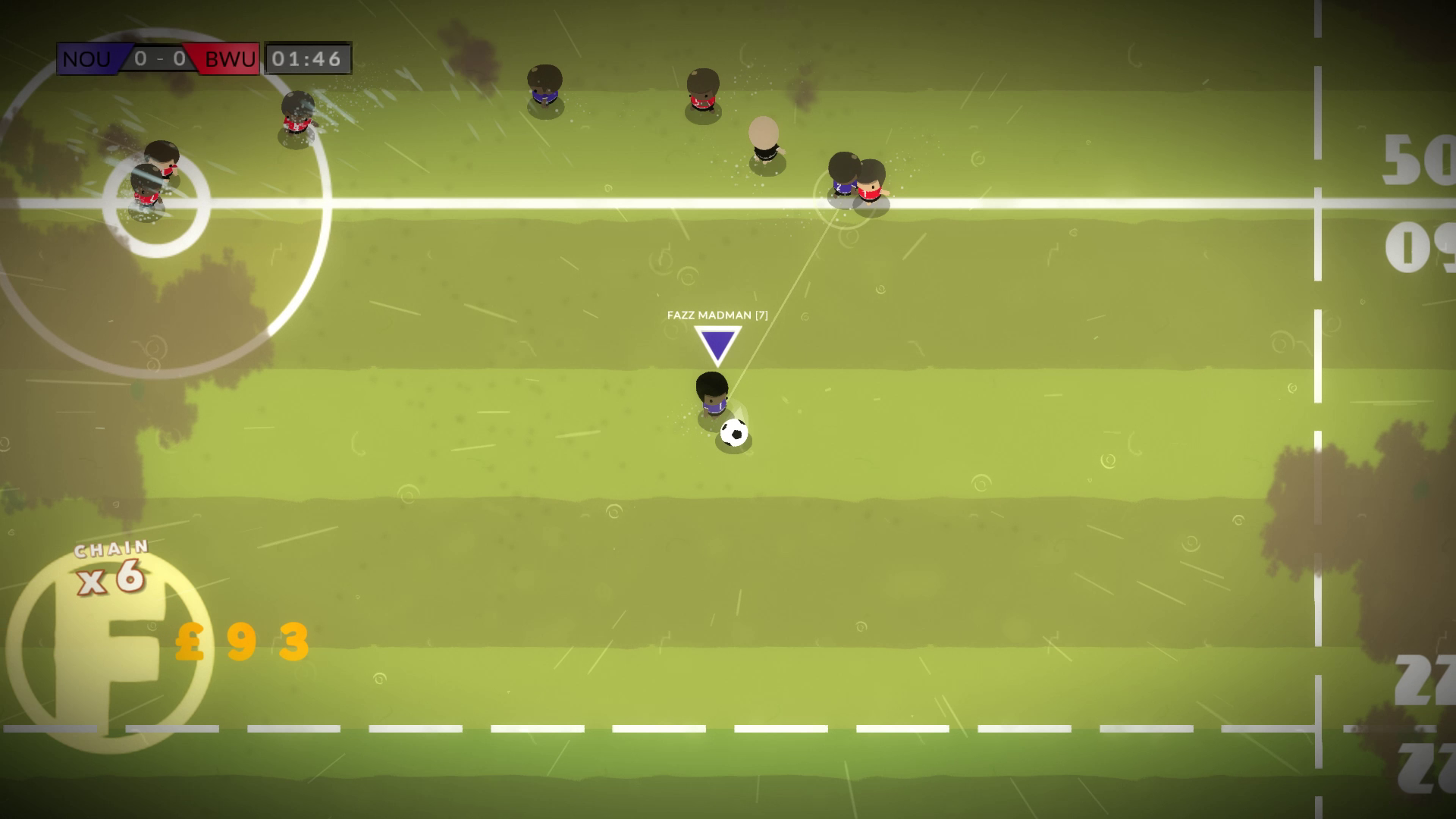 Football, or Soccer, or Soccerball, is the national sport over here in Blighty, and it’s pretty popular world-wide too. As such most of us know something-or-another about the rules of the -so-called- beautiful game*.

*Yep, I’ve just googled it, it is in fact called the beautiful game by some people.

Despite how well it sells, and the fact that there are more football tickets sold per year in the UK than there are citizens in Poland, Algeria, or Canada, many of us do like a good joke at the sport’s expense. None, it appears, more than BAFTA winners Size Five Games‘ Dan Marshall.

Back in April of last year, the idea for Behold the Kickmen first started to visibly form. A humble tweet pointing people towards a promising Early Access football title -Super Arcade Football- and a follow up remark that its appeal was cut from the same cloth as 90s classic Sensible Soccer – that it transcended the ‘boring’ bits of football. Shortly after that the joke became reality, and 15 months of development unfolded both hilariously and wonderfully over his Twitter follower’s feeds: Long threads telling people not to buy the game, dismissing rule corrections from football fans, and even receiving design tips from Sensible Software (creators of Sensible Soccer) founder Jon Hare.

It’s been a joy to watch it all come together, and in the end has resulted in a game with a circular pitch, multi-goal scoring kicks, a multiplier-led score system, an offside rule which red-cards anyone with the ball in that half of the pitch when the timer runs out, and goalscorers landing a big smooch from the umpire when they do a big goal. All of that with a story, news ticker, and pitch billboards which channel Size Fives’ distinct, silly humour, as well as silly procedural team and player names (as the developer mastered in their last title The Swindle). There’s also an absolutely masterful soundtrack from Tobey Evans (you can hear it here )who was also behind the excellent one from The Swindle.

In many ways Behold the Kickmen seems as much a joke about the differences between fun and disorganised playground football and deadly-serious association football, as it seems a statement about how they’re just bloody games mate they should be fun and wacky sometimes, no-one cares if you can count the hairs on the neck of Michael Duboir of United United’s 1st team, or that it correctly represents the real sport.

Before we get going with this, I should probably state that I’ve not been good at a mainstream football game since FIFA 2000, a game I remember explicitly because it had Joy by Gay Dad on the soundtrack, it also had Stop The Rock by Apollo 440, which is most definitely a song.

It’s always an odd thing to recall sports games by the soundtrack because most only ever play it on the menus or when the game is paused (Chalk one up for Behold the Kickmen already people). Sensible Soccer another one that is fondly remembered, if just because it was quick and had damn simple controls – none of this left d-pad to step over the ball then rotate the thumbstick-twice on a Wednesday and hit the left-bumper and B to do a ‘chip’ rubbish. Just directions and a button. You could do some wiggling stuff to move the ball post-boot, but that wasn’t really needed.

Behold the Kickmen, then, is an arcade assault on the rules of football. As previously mentioned the game exists with its own set of rules, which all work together well, and probably don’t need much more explaining. What is worth saying is that the game’s wealth of campaign settings backfire in being too plentiful – my immediate decision was to pick the longest campaign option, and a pretty long match length. A terrible mistake.

My reasoning was simple: The game allows you to upgrade your soldiers if you accrue enough FEVER points, if I have many, slightly-long matches then I’ll have ample time to turn my loser squad-mates into lean-mean Kickmen machines before the big finale against Brazil United.

The issue? Seven minute halves are perfect for abusing weak, low-league teams, but as the hilariously elongated league table’s mid-ground creeps up in adeptness, and the AI becomes more ballsy, their opportunistic goals draw focus away from the reason players might have employed such options (Fever. Text saying what each point on the slider actually meant would be useful here, for instance 45 teams, 10 minute matches, but then if I’d not thought that I was being smart by setting it up as such then I probably wouldn’t have committed to such a stupid feat.

Thankfully gameplay is light and easy to control, even against more difficult enemies, with the main difficulty coming from heavy clusters of enemies. This is due not to the fact that units are desperate to touch the ball, but from the fact that the pitch isn’t really particularly large and the default team size is 9. Experimentation with the Quick-Play option reveals that the smaller size of 5 actually makes for a well paced game with lots of medium range passes, with interceptions feeling unexpected and very effective counters created. If you contrast this to the maximum team size of 15 -which, while fun, is basically the football equivalent of trying to cross a box-junction at 8:45AM on a school-day- then the difference is stark.

The game lacks any type of player role or area system, instead replacing ‘formations’ with a drag-drop ‘4-4-2’ screen in between matches. It’s not a bad system, and a good 4-4-2 can easily allow you to build a tactic or technique which works on a regular basis. Stack your players to the extreme sides of the pitch and you’ll have an easy time getting the ball forward if you get to the ball on each restart. Once the ball is out there, however, the absence of roles (No ‘Big Kickers’ who float near the frontlines, and no ‘Silver’ or ‘Bronze’ keepers who stay near the goldkeeper) and previously mentioned density of soldiers means that the game’s score system can at times be easily frustrated, this and the fact that even fully upgraded goldkeepers simply cannot deal with on-target shots. It’s handy then that the scoring of goals is made out to be something somewhat minor in the grand scheme of things.

Goals come in three flavours, anything from within the goal area and penalty box counts as a single goal, from a bit further out (including near the corners) it counts as two, and from basically the other half of the pitch they count as three. As the kick strength is tied directly to the accuracy of the kick it’s rare (but not impossible) to land a triple goal, and definitely quite easy to land two-goals. The alternative however is often in walking in four goals early on (so you have a buffer against a lucky enemy kick) and then boot the ball around building up your frenzy score: the tracked statistic which definitely feels more important to the game than goals, if just because it results in money which can improve your teammates AI.

Frenzy feels somewhat arbitrary at times, and even after half-a-dozen hours playing the game I’m still not entirely sure what gets it rolling up or what the best ways to get big scores rolling are; by far though the best way to secure a couple of thousand football-bucks (which will net at least one upgrade until the later 10% of them) is to simply dodge and pass between players with a little dribbling in between. Bigger numbers do come if you tie in a few tackles and pass the quick-time event which sees you recover the ball if successful, however I’ve had enemy dodges bounce my soldiers off -or even the ball hitting the outside of the pitch- completely shatter my combo and score, so it definitely requires some care.

The frenzy score resulting in the ability to upgrade your little troopers, and the goal difference having zero effect on anything in the game, feels like an opportunity missed within the game. It’s a thing -like the absence of an ability to press a button to shift to the Kickman closed to the ball- which leaves a gaping absence in the game. Yes, yes, I hear you, ‘You were celebrating this being arcade-y earlier you prickly toerag!’ but, I do feel that the extremely high quality of the story, writing, background details as well as the shifts to the sport’s mechanics really upped the bar, which has only made certain areas of the game feel light after exposure to longer playtime.

All of that said, most arcade games can’t hold up under prolonged play, and Behold the Kickmen is charming and accessible when played in small half-an-hour bouts of play, through short leagues, or just as a couple of quick matches.

For the current price of entry the game is a steal, especially if you are already a fan of arcadey-sports games, its ‘Speedball’ reskin and custom quick-match set up options add some replayability to the game, and the game’s story does add some humour and incentive to plodding through the leagues.

Behold the Kickmen will definitely be remembered for its humourous take on the sport, but I also hope that it will be the start of a new trend in moving away from over-realism in games and instead focusing more on fun and quirk.