As a long time Magic: The Gathering player, it’s often hard for me to accept that there are other viable trading card games out there. At the very least, I’ve never been interested in the likes of Vanguard, Pokémon or Yu-Gi-Oh, but the Final Fantasy TCG has the potential to change my mind. After all, I’m almost as big a fan of the Final Fantasy series as I am of Magic, and with the emotive connection of seeing my favourite in game characters printed onto cards, the FF TCG might be just the ticket to pull me into something new.

It’s quite difficult to get a sense of the long term potential that FF TCG might have, although the starter sets that I’ve been sent to review were both from the Opus II (or second) set of releases, with a third due in July, so it’s a fairly safe bet for now considering how deep the Final Fantasy series lore extends.. Each Opus includes about 200 cards, and can be purchased in booster packs containing twelve cards, or via the handful of starter packs that accompanies each release. There are also a range of official accessories like sleeves and play mats should that be your cup of tea. 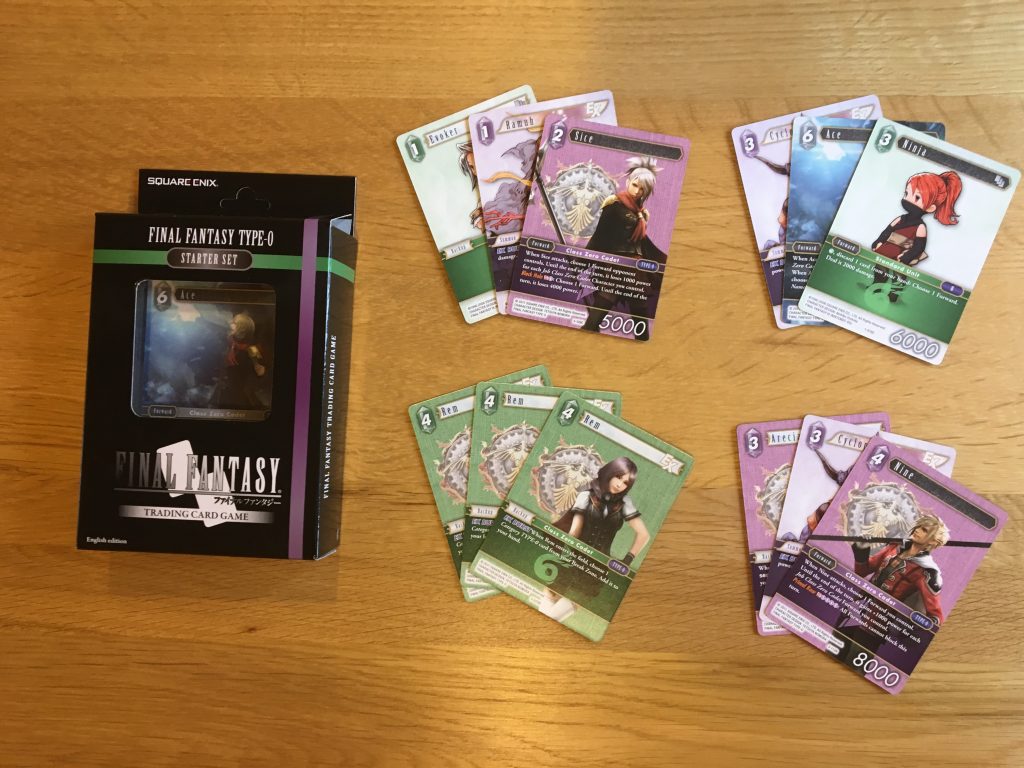 Upon receiving the Final Fantasy IX and Type-0 starter packs, I was initially disappointed. Both came in identical, low quality cardboard boxes with barely enough information on them to distinguish them from each other, let alone a more distinct brand such as Magic: The Gathering. Thankfully, inside the box things are more promising. Each pack consists of a deck of fifty cards, a paper play mat and a double sided quick start guide.

The cards themselves are made from high quality materials. Unusually for a TCG, the average size, rigid cards appear to have been coated in plastic, giving them a robust and high quality feel. The artwork, unfortunately, is a little more hit and miss. Some cards (heroes in particular) feature exceptional artwork, with stock character images captured in iconic poses and placed on textured, borderless backgrounds. Lesser characters occasionally feature uninspiring backgrounds and blocky, low resolution screen captures that do little to stir the soul. 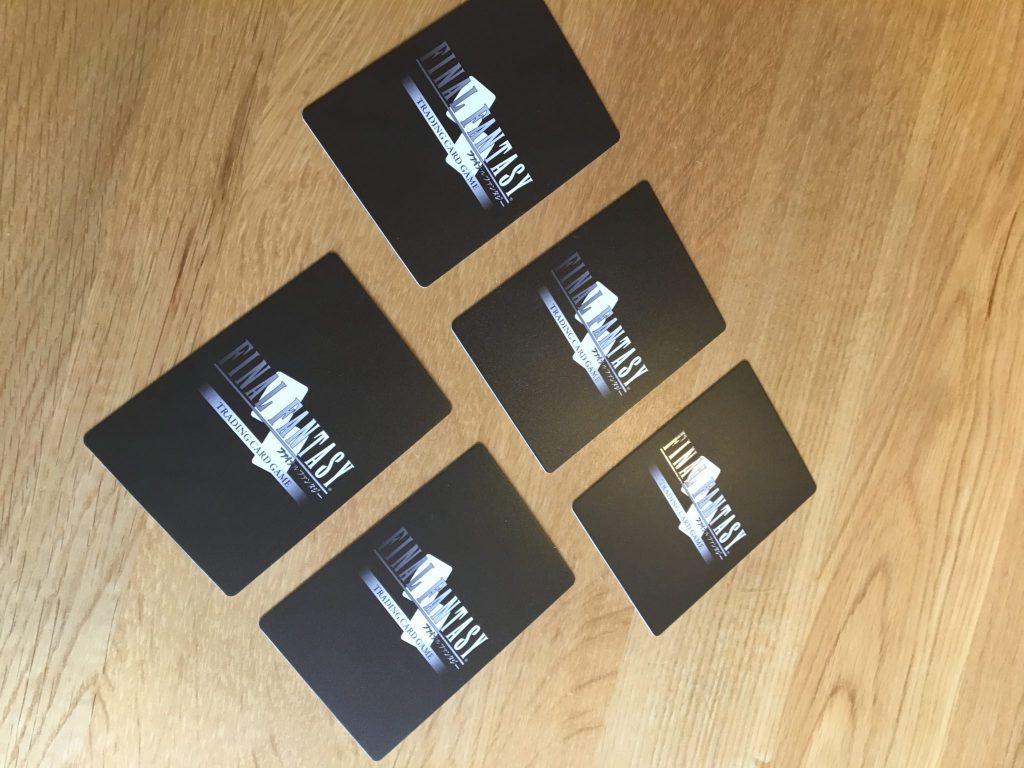 To say that FF TCG shares a few mechanics with Magic and Vanguard in particular would be an understatement, but it still introduces a few features of its own and overall, it is enjoyable to play. Each turn is structured identically to Magic, with an activation and draw phase, then a main phase, an attack phase, a second main phase and an end phase. Mechanically, this means that during each turn players will have the opportunity to make dulled (aka tapped) resources active again, then draw two cards (except the first players first turn, when he or she draws one) and then take actions to affect the board and/or attack.

Resource management is unique and interesting, and provides one of my favourite elements of play within FF TCG. Cards are played with crystal points (CP) matching one of the six in game elements, and as in most similar games, each card has a different cost. For the sake of simplicity, FF TCG asks for just one CP of the appropriate colour, wit the rest made up on any colour. Light and dark cards are exempt from this requirement, and simply need the required number of CP formed from any colour. To generate CP, players may either dull (aka tap) a backup card that was played previously to generate one CP of the colour associated with that card, or place a card from their hand into the break zone (aka the graveyard) to generate two of the associated CP. As an example, it is possible to play a five CP card on turn two by dulling a backup played on turn one for one CP, and placing two other cards into the break zone to generate four more CP for a total of five. 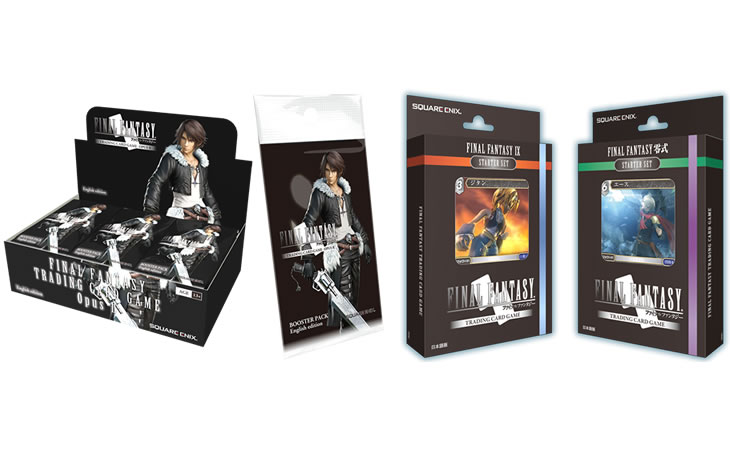 FF TCG allows only five backup cards (the ones you can dull for resources) to be placed on the board, but there is no limit on the number of forwards (those that are able to attack) which is a clear nod towards how you should play. I would have liked to see some variety here, such as cards that can play in either role (an easy future addition) but for now it’s not a major issue.

Through the CP mechanic, FF TCG has the potential to be a much faster and more aggressive game than many others, especially Magic: The Gathering which is often considered broken if such a powerful card is played so early. This is also reflected in combat, which clearly favours the attacker. In FF TCG, the attacking player is able to team any number of attackers to create a hugely powerful attack, but the defending player can only block with a single creature. This is the exact opposite of Magic, and when combined with the ability to rapidly deploy large creatures, can lead to more variation in approach. 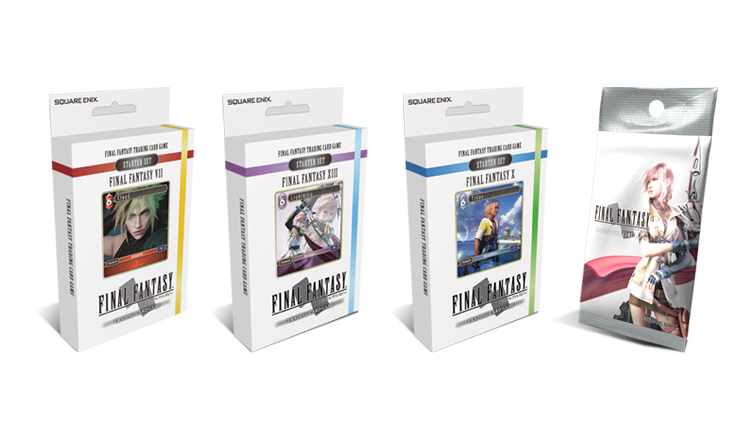 Damage is also interesting in FF TCG, and this is where the game shows similarities with Vanguard, in particular. Each player can receive seven damage before they lose the game, and damage occurs whenever an attack goes unchecked. When this happens, the player receiving the damage represents it by drawing a card from their deck and placing it into the damage zone. Some cards feature Ex Burst text, enabling the player receiving the damage to unleash some kind of (usually powerful) effect that might swing the battle back in their favour.

Probably the weakest feature of FF TCG is the rules documentation that is provided both in the quick start guide and on many of the cards. It is often unclear at best, and sometimes downright erroneous. As an example, several Ex Burst cards feature the text “When [card game] enters the field, take X action.” It is never made clear whether being drawn as damage and entering the damage zone counts as entering the field. The rules also state that Ex Burst actions are optional, but it is not said whether the card cost must be paid or not. Another example of poor rules description is around attacking and blocking. The rules state that if two cards attack as a party with a total power of 8,000, then a 6,000 power blocker could defeat either one (and the blocker would choose which) but that it in itself would be defeated. The rules also state that a 6,000 power blocker could defeat both 4,000 power attackers in isolation, but there is no text to make it clear if a single blocker can, in fact, block multiple individual attacks – which would be unusual in a game like this.

Many rules clarifications and how to play videos exist online (including a series released by Square Enix themselves) but despite my starter sets being part of the Opus II series, these errors have not been corrected. Nonetheless, the FF TCG community is growing, and there is already a competitive scene wherein a number of increasingly popular players share high level strategies that maximise the creative license that the resource management engine within FF TCG provides. 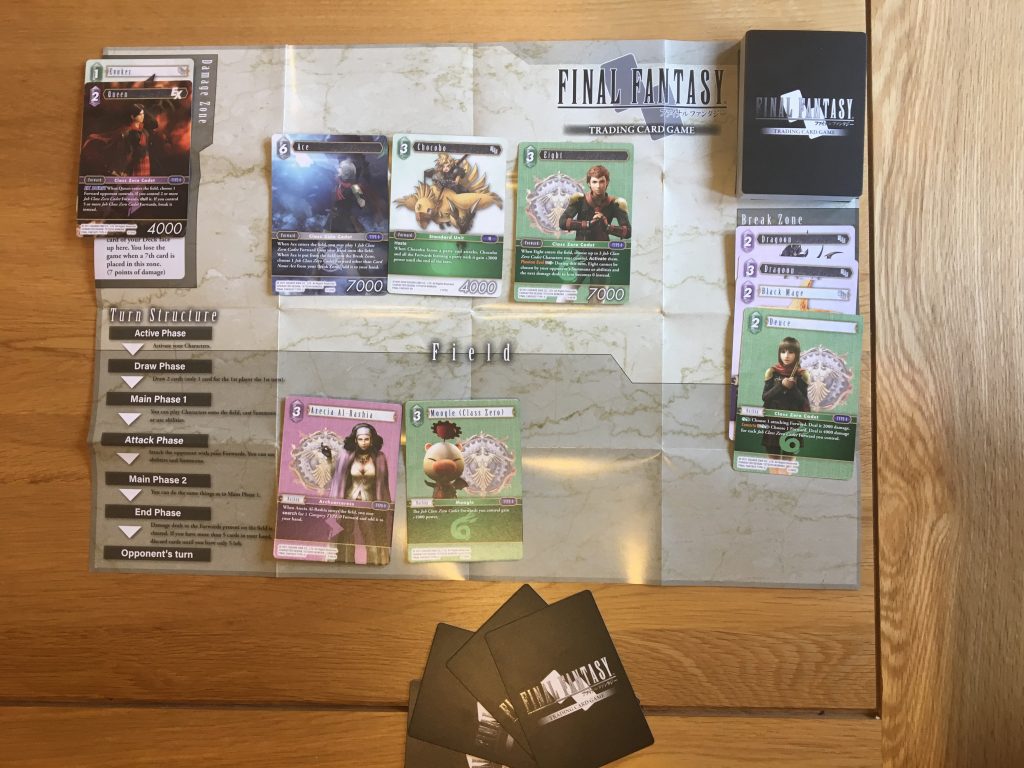 My starter decks are a far cry from including the kind of powerful set pieces that are possible in FF TCG, yet there are glimpses of a game engine that works nearly – it not quite – as well as that of Magic; The Gathering. The Type-0 deck, for example, effectively forces players to focus on the synergies between the named Class Zero cards, which often buff each other or provide similar powerful effects. Almost every other card in the deck is intended to be placed in the break zone so that these cards can be hunted from the deck and played as quickly as possible. It’s a fun and hugely interactive deck, that allows beginning players access to a view of what FF TCG is capable of.

The rapid fire deployment of troops and gung-ho attitude to managing your hand, deck and resources make for an exciting setup, and that leads into a lot of interesting slug fests. Taking damage isn’t always as big a problem as you might think because of the Ex Burst mechanic, and like any complex card game, the various rules inconsistencies and quibbles begin to fade away the more you play the game with other experienced players. FF TCG is about as easy to learn as similar games then, but the Final Fantasy theme might give it the edge over competing games depending on your individual slant. For me, it is nowhere near as polished as Magic, and the artwork can let it down, but then again Magic has been around for a thousand years, whereas FF TCG has only just begun to show what it is capable of.