For a game about conflict, it’s certainly been a conflicting experience playing through Fate/Extella : The Umbral Star.  Each time the game does something interesting, it goes on to do something disappointing, though not always in that order.

The game opens with your character having a vision of being attacked by a titanic shadow and awaking with amnesia.  My initial reaction was to roll my eyes, but I was a terrible person and wrong to do this.  Because here’s the thing: while this is a trope, it’s a trope used well.  SE.RA.PH, the virtual world you awaken in, is a complex place and you already have a long history in it.  Other characters treat you as an old friend, referencing unfamiliar terms and events.  Both you and the main character feel hopelessly lost together, and it was genuinely interesting to share that feeling of confusion. 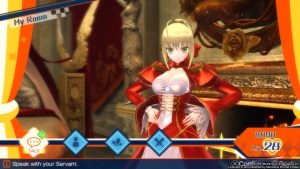 For that reason I won’t elaborate on the plot too much, but here’s a brief rundown; you’re a Wizard, which is a sort of hacker, and following a holy war you’re now the ruler of SE.RA.PH and expected to unite the world under your banner.  You do this by fighting battles against rivals who are trying to carve a piece of SE.RA.PH out for themselves.

Your Wizard status isn’t revealed to you by a massive, bearded Robbie Coltrane, but by your Servant: Nero “Saber” Claudius.  Since you don’t have any combat skills yourself, Servants are the avatars you’ll take control of in battle.  They’re all based on historical or mythical figures, with three playable in the main storyline and a further thirteen in shorter side stories.  Each main story represents a parallel version of events, with each elaborating on the full narrative and lifting the effects of your amnesia.

Honestly, there’s so much dialogue in the game that it’s as much a visual novel as an action game; I found myself obsessively playing just to find out how some situations would resolve themselves.  One of the later story arcs in particular stands above the rest, dealing with your capture and the relationship with your captor.  And although the dialogue occasionally goes on a bit of a tangent, which can get frustrating when you’re so engaged with the story, it’s only a minor blip.

Gameplay itself is in the same vein as Koei’s Musou/Warriors games; you play as a powerful hero, vying for control of areas on a map against a large opposing army.  Generally, your goal is to complete a “Regime Matrix” which is a meter that fills as you capture areas.  Each area has a value, with higher value areas filling more of the matrix.  Areas are captured by defeating high ranking enemies inside them called “Aggressors”, which appear when enough regular troops have been murdered.  This is a game that’s all about the spectacle of chewing through vast crowds of enemies, and it does this incredibly well; attacks always feel like they have weight and impact, and the game never slows under the volume of enemies.  On the PS4 version, at least, I haven’t tested the Vita version.

There is an ebb and flow to battle, though.  Enemy owned areas can spawn “Plants”, which themselves generate Aggressors and allow areas you’ve captured to be attacked.  This is always made clear on the map by a series of arrows slowly progressing to from one area to another, and it’s vital you deal with these.  Ignoring a push will allow for an invasion, and ignoring an invasion will allow the enemy to capture that area.  Lose enough areas and the enemy will complete their own Regime Matrix, and you’ll lose.  It’s this push and pull that forms the backbone of the decisions you’ll have to make in game – whether to focus your attention on capturing an area, or whether to move on and eliminate an attacking Plant or defend a friendly area.

Later stages will often have the odd curve ball thrown in to keep things interesting, such as having to capture particular areas to weaken an enemy, or having to focus on eliminating a particular enemy Servant.  You’re also given side missions by other Servants, which are taken from a set list of tasks such as “Defeat 3000 Enemies” or “Capture 3 Areas”.  Completing these improves your relationship with that character, which unlocks upgrade slots for them.  It’s also possible to improve relationships with the main three characters through dialogue choices. 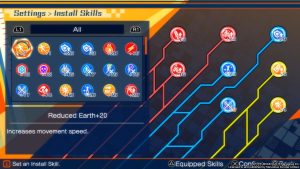 Speaking of upgrade slots, these are used to hold “Install Skills”.  These apply certain permanent effects to the Servant, such as increasing the rate at which they gain experience or increasing the damage they can do based on K.O.s.  Additionally, skills are colour coded and placing like coloured skills in linked slots will give them a boost in effectiveness.  So there is some strategy in what you use and how you place them.

However, while there’s a wide array of install skills, I found myself using the same ones for almost all characters.  This isn’t an issue with the skills themselves, rather a problem with a lack of diversity in the characters.  Although characters have distinct classes, along with flavour text suggesting they play distinctly, they all end up feeling pretty similar.  While some seem to have a slightly stronger attack or defence, there’s no real mechanical difference.  You’re generally attacking over the same range by hammering the normal attack button and as such, the skills you might pick for each one end up being the same set.

Another system intended to provide customisation options is the Code Cast system.  This is allows you to craft equipment that holds up to four spells that can be used in battle.  Unfortunately, it never really feels like you’re required to make use of them.  Heals tend to be the most useful, and while there are elemental resistances that can negate traps that appear in some areas, the damage from these traps can be tanked with little consequence.  There’s also a spell to switch to another servant, but again, that wasn’t particularly useful.

As with the skills, I can’t help feeling that Code Cast falling flat is also down to how similar characters are.  It’s a real shame; if characters played more distinctly, there would be reason to capitalise on their particular strengths, or shore up their weaknesses, and it would have stood to make combat more interesting too.

The character art itself is pretty, especially the 2D art in the various menu screens.  In battle characters have a distinct silhouette, so it’s easy to pick targets out from a crowd.  Environments make full use of the virtual setting and are wonderfully abstract; with floating trees, segmented rocks and inverted waterfalls.  There are various themes too, from Roman cities to Japanese gardens, so you’re almost always fighting in an interesting location. 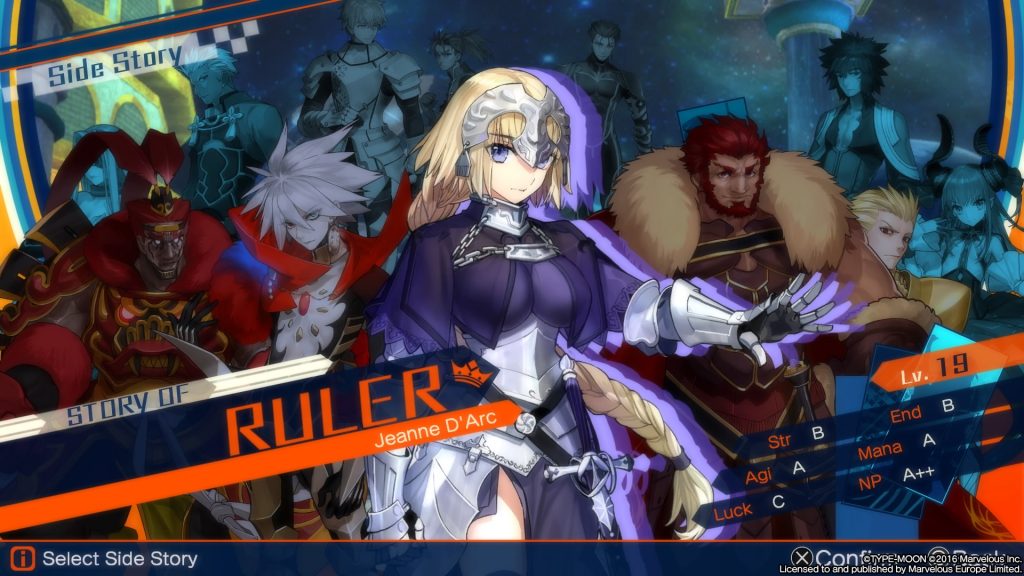 In battle, for the most part you’ll rely on combinations of normal and heavy attacks to form combinations.  Blocking is also possible, but it’s often too busy on screen to make good use of it; you’re almost always reacting to stop an attack that’s already happening rather than countering one.  There’s also a dash, which is a lot of fun to use as you can zip about, ploughing through enemies.  Though it would have been nice if the dash could be used to cancel attacks, as I often found myself needing to counter a target but taking damage because I was stuck in an animation.

Beyond these regular attacks there are a few special moves that can be used to deal with stronger enemies.  The one you’ll most frequently use is the “Extella Maneuver”, which is an area attack that charges reasonably quickly as you attack rank and file enemies.  Next is the “Moon Drive”, which also charges while attacking enemies, albeit a lot slower.  This allows you to briefly transform, increasing your attack damage and making you immune to knockdown.  Finally there’s the “Noble Phantasm”, which is charged by collecting three pieces of a circuit scattered around the stage.  As such, you’ll only get one of these, but it’s by far the most devastating attack in your arsenal.  All three of these special attacks are a spectacle and even after playing the game for many hours I rarely found myself skipping the attack cutscenes. 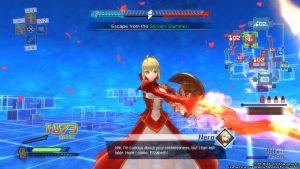 I suppose it’s probably time to bring up the other main sticking point with the game: pandering.  Female characters are often barely dressed; one outfit in particular being an armoured thong and nipple guards made of less metal than the pie tins in a pack of Mr Kipling’s Bakewell Tarts.  Some romantic relationships that existed before the start of the game continue post amnesia as if nothing’s happened,  rather than taking the more interesting route of dealing with the impact of it.  Also there isn’t a single main character that isn’t in love with you.  With the exception of one of these main characters, none of the relationships develop or feel like they’re earned.  In the end they feel cheap and, honestly, a bit weird.

As I said at the start, Fate/Extella gets a lot right, while also getting a lot wrong.  In spite of the pandering it’s a genuinely fun game with an engaging story.  And despite the samey characters, there’s enough spectacle and satisfaction in combat to keep things interesting.  As far as Warriors style games go, it’s a pretty good example, so if you’re a fan of those titles, there’s a lot to like here.

Pete should really write a bio at some point.