Review | Diaries of a Spaceport Janitor

It’s human nature to describe things by comparing them to other things; a fire-truck red phone, an earthy smell like radishes, a soft, smooth surface like silk. We do this too when we critique or review things too (let’s pretend ‘X on crack!’ doesn’t exist… forever, please). Instinctively we filter games into genres, making up new ones when we spot naturally pairing mechanics. We set the classics upon pedestals, and sometimes even challenge things because they tried something too new. In other forms of media we declare something a person’s Magnum Opus, but in games we can’t assume -like books- that anybody knows anything of the authors and creators.

I say this because what I want to compare Diaries of a Spaceport Janitor to is a dungeon crawler RPG, but one with a massive, rich and populous town… and no dungeon crawling. As a matter of fact, the slice of the universe that we see in DoaSJ is easily one of the greatest hub-towns I’ve ever experience in an RPG supplanted into a game that isn’t an RPG. Market districts teem with noisy, bustling stalls, alleyways hide strange would-be quest givers, and thug-like guards pace the street exacting punishment on those they see as weaker and inferior. Which happens to be you, by the way. 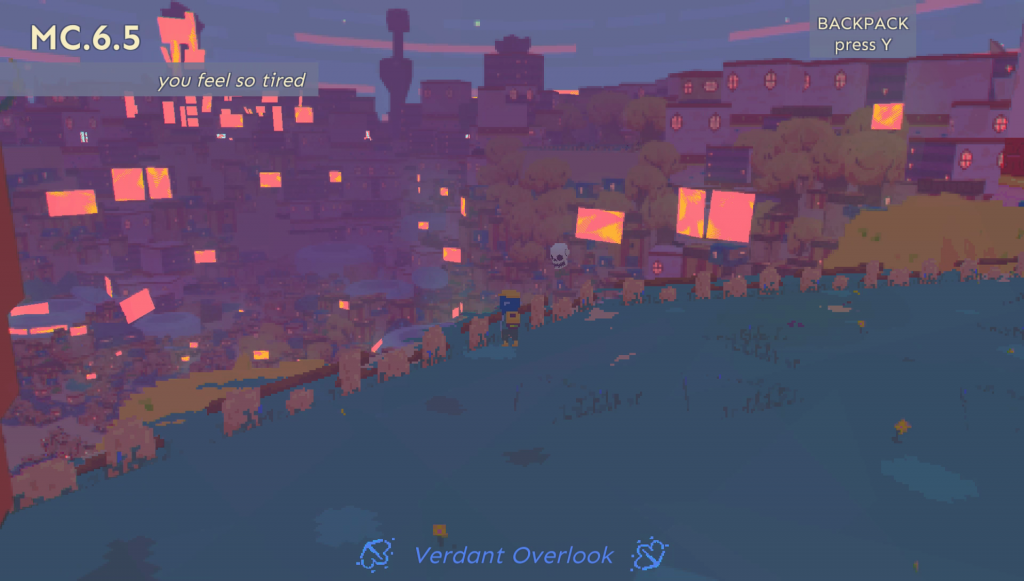 It feels like a world built around a tight RPG experience of dungeon diving, and buying 6 digit value weapons at shops, grinding through the underworld on quests to save the world, using deadly weapons, sacred armour, and the blessings of the gods. Which is amazing, because that world is perfect, and you’re a tiny pawn in it, who wouldn’t even be seen by the protagonist if there was one. When you are mugged in the streets by The Red Scarfs, no hero appears, when you are about to be cursed no hero appears to save you, when you are down on your luck there is nobody to give you hand outs, there is nobody to take your quest to free you of the curse. In one of the busiest game-hubs I’ve ever adored, you are completely alone. Completely alone, that is, except for your shouting skull-curse companion. 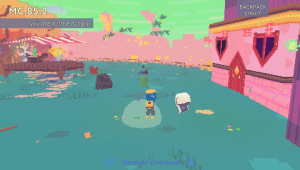 In this skull, and the tasks we must do to free ourselves of it, we find ourselves at the nearest point to playing an adventure or RPG that the game reaches. Your skeletal friend is a result of your trying to shortcut the daily grind and become wealthy enough to escape Xabran’s Rock through delving into the ruins below the spaceport where you toil away incinerating rubbish, waste, and a massive variety of peculiar items left dumped on the floor.

It’s not just incineration though, you’ve a personal inventory, and a chest back at the almost completely bare room you call a home. Perfect for hauling around vomit, idols, scrap, rope, gems, relics, flyers, discarded food, and piles of dust. If that’s your thing. The game is completely rife with strange items, from the ones with actual value to the ones that certain NPCs are trying to stockpile, to ones that paint themselves as useful but serve no purpose. Thankfully, this is where living in a bazaar that must surely have hundreds of NPCs within, comes in useful.

The game’s value, and trading systems are wonderful. Certain NPCs, as I mentioned, are out to collect containers, or piles of dirt, or gems, and hold value to these -otherwise useless- items. Many items littering the floor can be sold to merchants that carry them as stock – assuming you can find one of those merchants. Many others pay out well for being incinerated (I believe there’s a % value payout system in place) or can be eaten if you don’t have enough money, or are somewhat desperate. 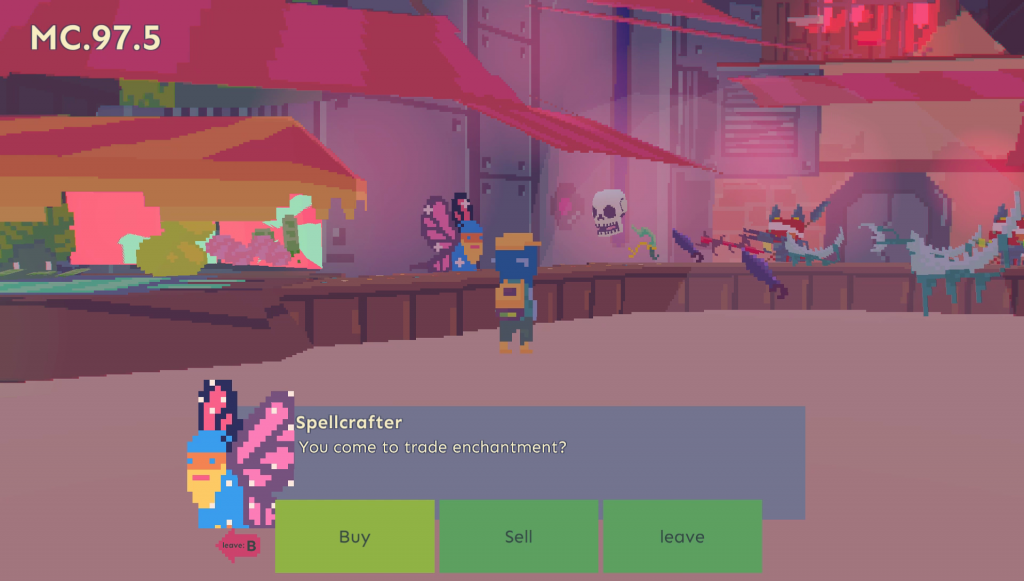 There’s several different types of vendors in the game, namely humanoid-ish vendors who you can trade and haggle with, and /others/ which includes lotto machines, and various other vending machines. The haggling mechanic seems to be completely on the dice roll, so you can waste most of your 10-15 minute day trying to get some food that won’t make you chuck up your guts for a low price; you’ll spend a lot of time buying River Weevils.

The food and hunger mechanic is relatively well done in the game, which is good to see as recently games have almost used it as a punishment or restrictor on progress and ambition. There’s also another mechanic which features, and to date seems quite unique to the game; the shifting of genders. In this already alien setting you are just trying to get together enough credits to get out of dodge, but your character is also struggling with something else alien to them; their own gender. In this case, the character simply spends a little bit of the money they have earned to take a pill, the pill then shifts their gender -an action that only takes place in words- and removes any headaches or confusion that was overtaking your screen. As I said, it’s an interesting mechanic, essentially both a comment on people’s perception of normality (as the main character is one of the most human looking of all the alien species in the game) and a nudging mechanic reminding you to keep pushing forward and earning more money. 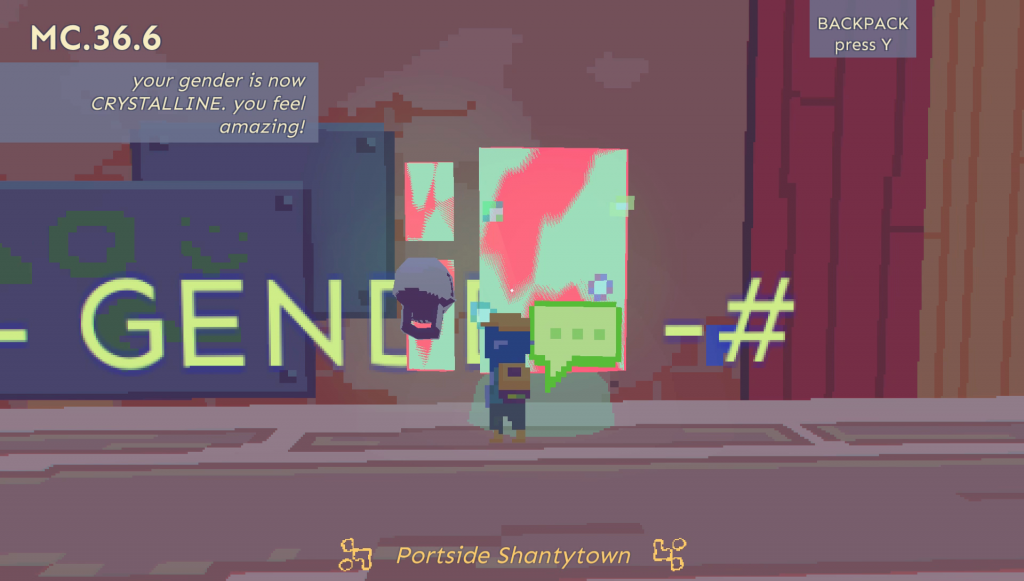 The spaceport is vast, with a map that doubles back on itself cleverly so that -unless you draw it out- you always feel a little bit lost as you ramble through alleyways and over bridges. There’s a lot of visual guides, massive signs, a giant sword jutting from the ground, and arrows on the floors; but it’s delightfully easy to follow a parade float, or go off to pray for luck at a god’s statue, or simply dawdle in a district, and that’s really the charm of the game. It’s the 15+ alien races; it’s the fact that bands play music, and there are sound emitters everywhere’ it’s the fact that every item type has its own description. It is also the fact that, at the end of each of the nine weekdays, before you go off to bed, you get a chance to type out what it is that day. It’s a slice of life of an almost invisible sub-citizen, in an amazing spaceport. 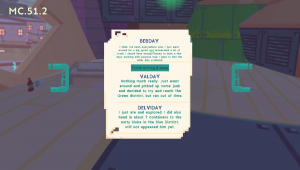 The most divisive thing about the game will probably be its art-style. Sundae Month have combined a three-dimensional world that you explore in third person with two-dimensional pixel characters, items and objects which can slip from view if they turn, or you angle the camera upwards. In my opinion it leads to some amazing views, as things smooth-off in the mid and far distances, versus the charming -almost retro- low-res look when up close. It’s also made in a combination of amazing contrasting colours, while also dabbling with pastel colours… something I’ve heard people describe as a little too alien for them. The developer’s remark on this with the graphics options in the launcher; Bad, or Worse.

Personally, I massively enjoyed wandering the spaceport, and I was a little disappointed at how short the game turned out being; I had hoped to find a bit more tailor-made questing in the port of Xabran’s Rock. That said, the soundtrack,and the sheer scale of the game, as well as variety of detailed items, are worth a lot more than the game is on sale for. I highly recommend the game to anyone with an open-mind about games, a liking of slice-of-life/sim games, or just an appreciation for deep, engaging worlds.