The star of this interactive visual-novel is Detective Hank, self-proclaimed greatest detective in the world and the kind of guy I could get along with. With a penchant for caffeine, a politically correct mentality and an excellent hat, he seems to have everything anyone could ever want – until that pesky phone rings and he has to do some work!

Someone has stolen a priceless artefact – The Golden Sneeze – from the museum of ancient history and it’s Hank’s job to figure out who. With 4 different story lines to choose from, the details of the robbery are different each time and you need to figure out which one of the 6 suspects committed this atrocious crime – but be careful, choosing the wrong line of questioning could lead to useless information and a musical cue which has the ability to make you feel like you’re 5 years old again and being told off for traipsing mud across your mum’s freshly cleaned carpet.

Once you’ve inspected the crime scene and gathered your initial information it’s time to get chatting to your first two suspects – the museum’s curator, Mr Abrams and Hank’s go-to criminal, Saphira Capone, daughter of an imprisoned mob boss and local career-criminal-turned-restaurateur. Once these leads are established, Hank investigates the nearby area and is rudely interrupted by an explosion caused by a young girl who claims that her name is Tomoe and the Golden Sneeze, in fact, belongs to her – making suspect number 3.

After a brief conversation with Tomoe she scarpers and Hank finally gets to go home where his wife, Mary, and her two dad’s, Peter & Paul, arrive shortly afterwards. During a discussion with Paul we learn that he and Peter own a Robot factory (amazing), but also that they may have motive to want to acquire the Golden Sneeze (oh no!). With suspects 4 and 5 added to the pool, hank needs to narrow things down a bit by questioning everyone, only they all seem a bit tetchy about being accused of being criminals, so Hank needs to be as subtle as possible when trying to get his information.

You must spend the rest of the game helping Hank to uncover the correct information from each suspect to determine the correct culprit. With a few twists and turns along the way and multiple paths you can pick, it’s up to you to decide which routes to pursue and which to leave alone. During the course of this investigation, Hank teams up with Mary as she is the one he trusts to do the job over other police officers (presumably due to her persistent confirmations that she just loves to ‘punch some bad guys!’).

The fact that you can choose to run as much or a little of the dialog as you want, means that you have quite a lot of control over this section of the game and therefore how the remainder of it plays out. The story-line always runs in a certain order, and you are always presented with the same options to choose from but you can dictate how many opportunities you want to take within each section. A little inexplicably, during this process Mary also gets added to the pool of suspects via one line of dialogue with another character making the numbers up to 6.

Before deciding on ‘whodunnit’, Hank has an opportunity to go through each suspect and review the case against them in comparison with the crime scene details. He must then choose someone to arrest who is then manhandled by coppers until they either find the artefact or come up empty-handed – at which point Hank must pick someone else to arrest. However, you only get 2 chances to arrest the right person, otherwise it’s game over – you’ve let yourself down, you’ve let Detective Hank down….

In the event that you did pick the right person, the whole thing is wrapped up with a trial in court whereby Hank is required to present his evidence to a judge and, providing you’ve accused the correct suspect and you manage to pick the right answers to prove their guilt, they are sentenced for their crime and we are treated to a ‘what happened next’ style cutscene. This is different for each suspect and, without giving anything away, in one case was a bit of a nice surprise. 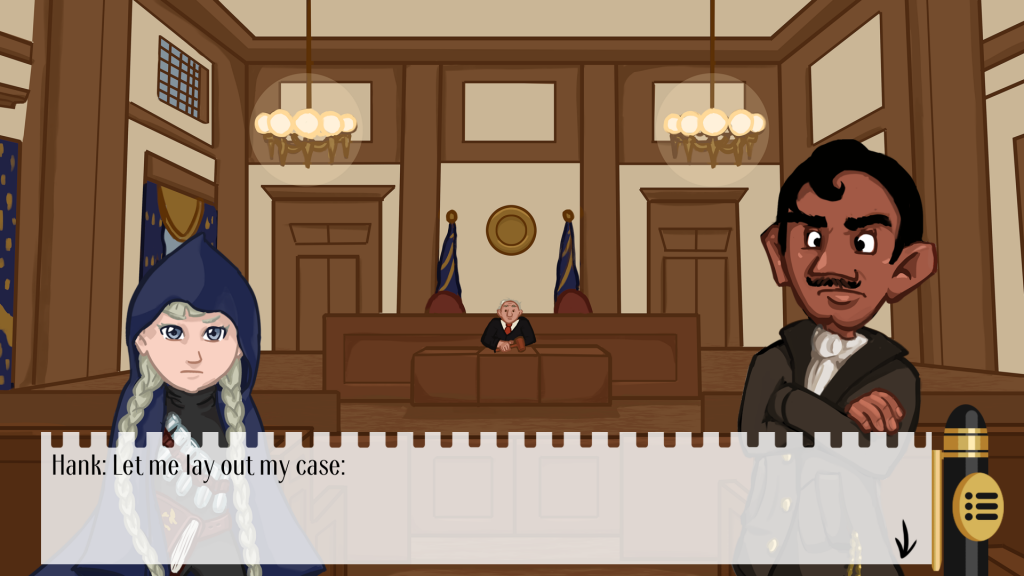 The constant stream of text can make your eyes do that glazing over thing from time to time, and once you’ve played through one or two of the stories much of the content is repeated. I found myself madly clicking through bits I’d already read only to mash my way past new information by accident – I think the key here may be patience, and a good cup of tea.

Once you’ve played through the story a couple of times you can start to predict who has committed the crime as soon as you find out the crime scene information. I experimented with this by choosing the character I was going to arrest immediately after this information was announced, racing my way through the game and only choosing to arrest that character at the end and I managed to find the right culprit.

The re-playability would probably benefit from a long break between playthroughs in order to avoid the sense of repetition, which is not really a practical things to expect from players, however, each time I played I picked slightly different options to see what would change and the game continued to reveal extra bits of information to me which kept it interesting enough.

The ‘hand-drawn’ artwork is lovely, adding that storybook illustration feel and the use of the notebook-style paper and pen behind the story text is both practical for reading and relevant to the theme – as if you’re taking notes for the case. The accompanying music has the ability to be nicely inoffensive whilst you’re playing but get stuck in your head for hours afterwards. With Obsessive Science Games based in the Netherlands, at times the translation is a little off which can be off-putting in a game which is entirely text-based, and some of the humour gets lost in translation, but overall the dialogue is interesting and really quite funny.

Detective Hank and the Golden Sneeze is a great game to pass a couple of hours, an average playthrough takes about 30 minutes if you don’t skip through content and I happily played all four scenarios to find out the differences. Although the literature boasts 9 different endings I’m not sure I’d play through everything again on the off-chance I picked the right options to trigger the differences.

You can buy the game now on itch.io and you can vote to get it on to Steam via Greenlight.