Review | Day of the Tentacle 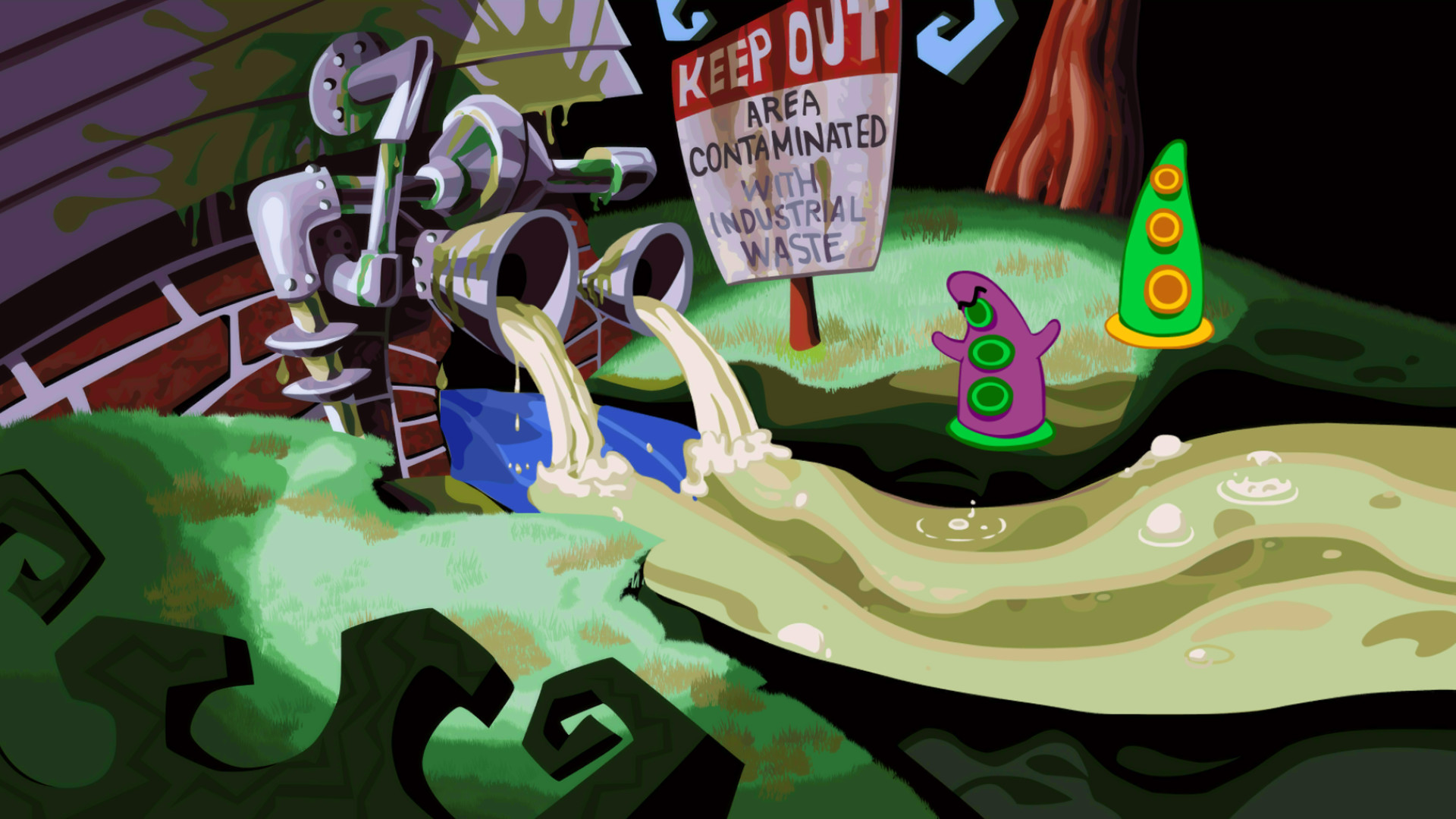 That’s another Double Fine mess you’ve gotten me into! The team return with another remake of a classic LucasArts adventure game. This time, it’s Day of the Tentacle; arguably the best point-and-click adventure game ever made. How will Tim Schafer’s leadership debut stack up against modern day competition? Let’s find out.

You’re still reading? Good. That means that I can begin to explain why I said arguably, because believe it or not, there is some doubt about which game actually is the best point and click adventure ever. Undoubtedly though, Day of the Tentacle is among them, but it’s tough at the top, and Tentacle shares the spotlight with some illustrious company. Prior to this remaster, I’d never played Tentacle, but I am extremely familiar with LucasArts‘ other adventures, and I love each and every one.

From Maniac Mansion on the NES in 1987, to 1998’s relatively advanced Grim Fandango, LucasArts are the undeniable masters of the point and click adventure genre, and Tim Schafer and the team at Double Fine Productions seem rightly proud of their crusade to remaster each and every one of the classic adventures for a modern audience. Tentacle is an interesting choice for an application of spit and polish, because when it launched in 1993, it was the first LucasArts game to feature a fully voiced cast of characters, as well as a unique and advanced art style that holds up reasonably well even now. 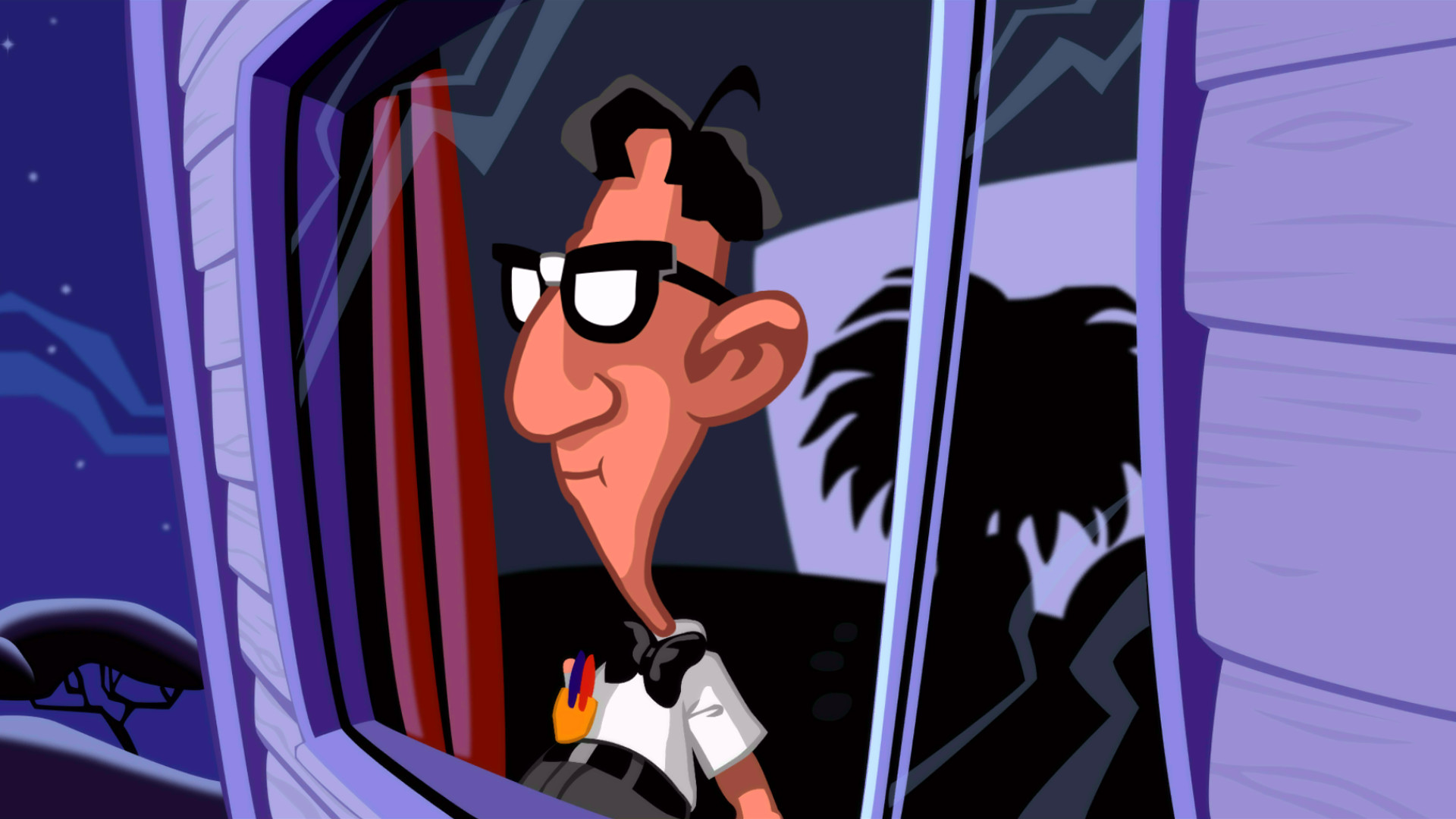 The reason this is interesting is because the more advanced each of these remastered games was at its original release, the less value a remaster would appear to offer. I mean, the voice acting in Tentacle is already fantastic, and imagine the furore if Schafer and the team decided to change it just for the sake of it? Besides, what would be the point in that anyway? That leaves graphics and user interface as the main candidates for improvement, and thankfully both have been addressed with the sympathetic and expert touch that remains a constant throughout each of the other Double Fine remasters.

Tentacle has always been known for its delightful, cartoonish artwork, and this remaster refreshes and renews the garish, comical characters and angular, overstated scenery. Each scene is brimming with vibrant colours and quirky touches that bring a unique kind of life to the mansion in which the vast majority of the action takes place, and there is a joy to the way things look that can make even the most macabre scene (such as that of a failed inventor who can’t even manage to commit suicide effectively) seem amusing.

Like all Double Fine remasters, it’s possible to switch from the new graphics to the original at the touch of a button, and to enable the commentary of Schafer and his team. I’ve always found the visual swap to be an interesting distraction for about the first ten minutes of these games, but the novelty soon wears off, and Tentacle is no exception. The commentary though is much more interesting, and as I haven’t played the game before, it was fun to experience the game both with and without this feature. 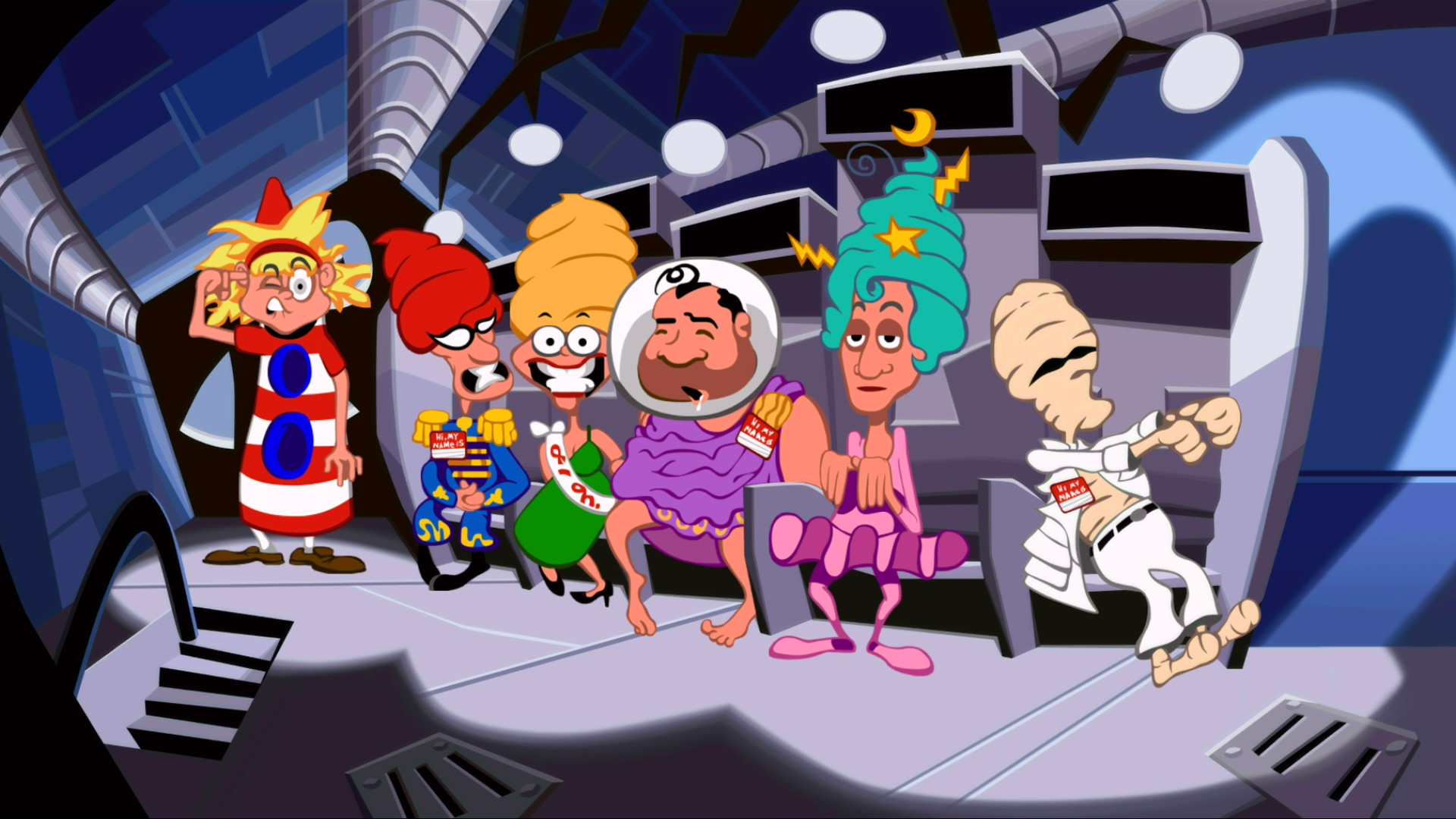 And so the success (or failure) of Tentacle as a modern point and click adventure is linked primarily to how good the game was in the first place, and how well the script and puzzles stack up against modern peers. The answer to those questions is not as simple as it might seem though, because Tentacle is simply unique among similar games. It features an unusually complex plot that is built around the mansion location that I mentioned previously, but spread across several centuries that are linked via various means of time travel. The game links both plot and puzzles to this central theme with unusual cohesion, simplifying the concept to the extent that it works perfectly with the slapstick humour and lighthearted script.

Where it falls short of certain modern games is in creating real characters with emotional links to one another, or in presenting engaging and extended dialogue. I don’t think that matters though, because given the brief to create a slapstick, comical, point and click adventure with smart puzzles that actually adhere to the average perspective of common sense, I doubt any developer could do better than what Tim Schafer and his team created in Tentacle almost twenty five years ago. I did muse earlier about whether or not Tentacle is the very best example of its kind, and whilst I still prefer Monkey Island and maybe its sequel overall, I wouldn’t blame you if you thought Tentacle was better. This is a game that is so close to a perfect example of the point and click genre genre that trying to decide if it is better or worse than several similarly good titles is kind of a moot point.

To put it another way, then if, like me, you never played Tentacle in its original form, then you owe it to yourself to give this remaster a try. I personally don’t think that it is the best point and click adventure ever made, but it might be the second best, and if you need more physical evidence than that, then try this. Tentacle has a superb script that is still funny and relevant today, and it has some of the best one liners and visual gags that I’ve ever seen in a game. It has puzzles that (bar a few) are overwhelmingly logical considering a setting that features megalomaniacal tentacles, George Washington, and a considerable dose of time travel. It looks great, and it plays well thanks to an improved interface. Honestly, what’s not to like?