In Eric Lang’s critically acclaimed Blood Rage, players take control of rival Viking clans during the time of Ragnarok – aka, The End of the World. All Vikings dream of a glorious death and a place at Odin’s table in the halls of Valhalla, and the clans of Blood Rage are no exception.

In the base game, each of up to four players controls a clan leader, a horde of  Viking warriors and a single longship, and the aim of Blood Rage is to amass as many Glory Points as possible during the course of the game. Each game of Blood Rage is divided into three ages, and with each age, another province is destroyed. This forces the clans into more and more frequent confrontation with each other, as they struggle for control of provinces and the resources they contain. 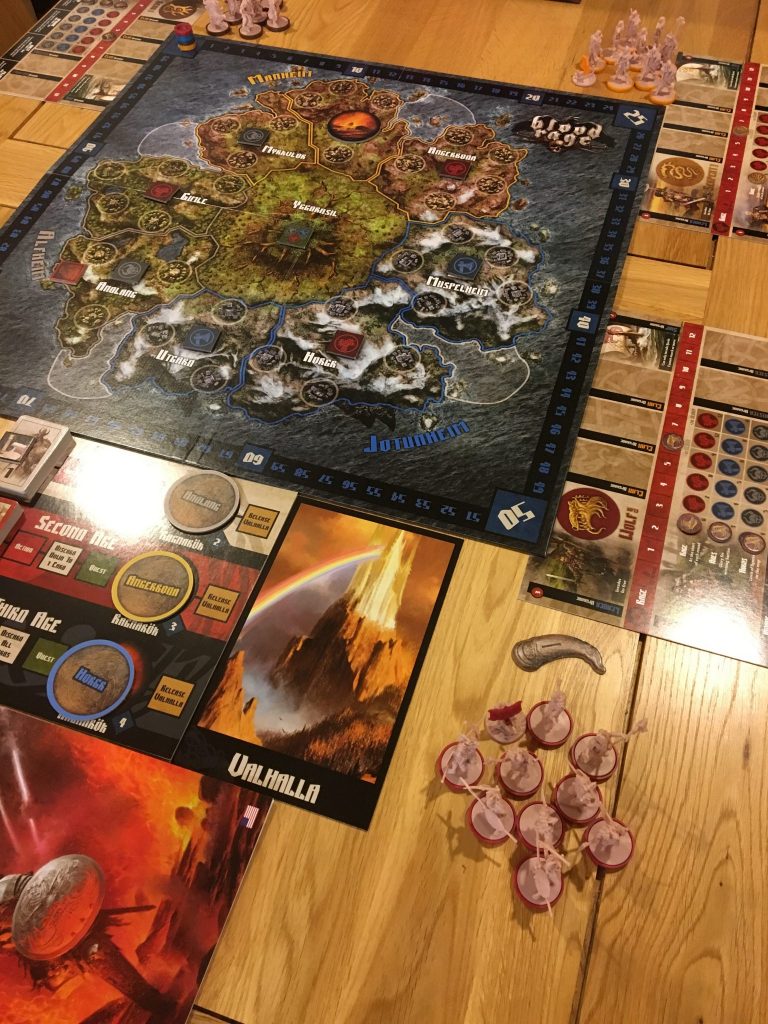 Each province begins the age with a token on it, and should you claim them through pillaging, each one (either rage, an axe or a helm) upgrades one of your clan statistics. The central province of Yggdrasil always includes a token worth one of each resource, and as such, is extremely sought after. Rage tokens increase the amount of rage available at the start of each age, whilst axes increase the glory gained when successful in battle. Helms (described in game as horns) increase the number of miniatures that each clan can deploy on the map.

Whilst controlling provinces and plundering them always take place on the board, much of the strategy in Blood Rage happens off it. Among the other gameplay elements, almost certainly the most key is the card drafting phase that takes place at the beginning of each age. Each player is dealt a hand of cards face down, and will secretly choose one (two in a two player game) and pass the pile onto the next player. This continues until they are all taken (in a three or four player game) or until only two remain in a two player game. 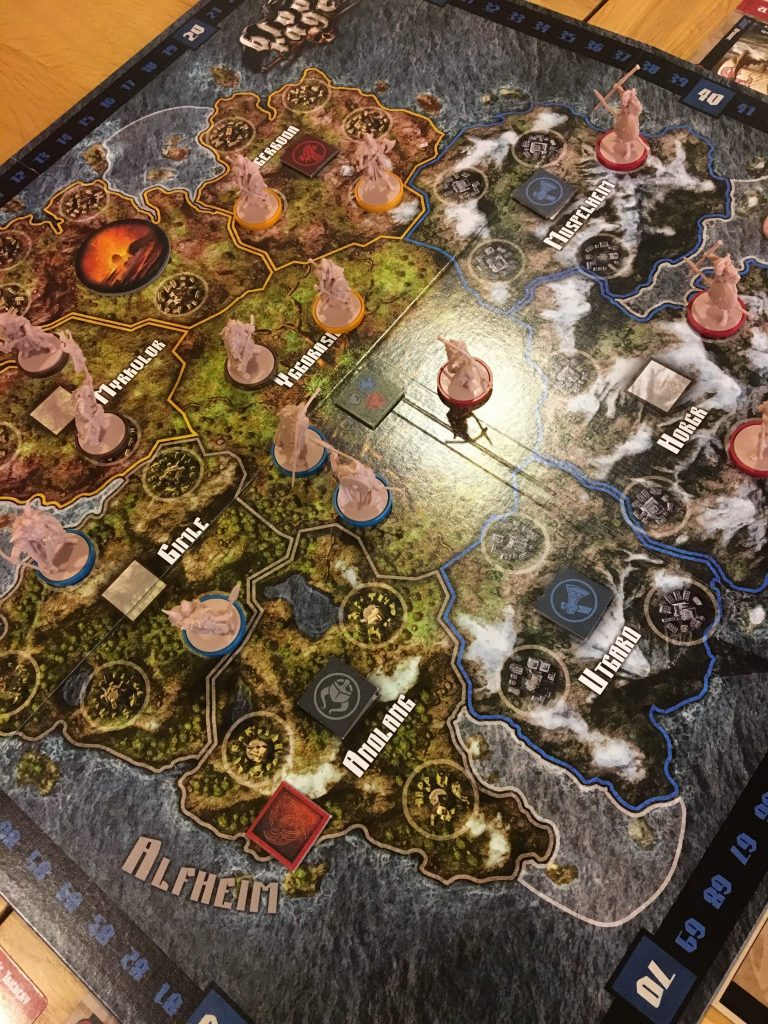 Following drafting, players have a number of actions available to them each turn. Cards can be used for various functions such as summoning one of the neutral monsters and following any special rules that come with them, or depending on the card, to influence the outcome of battle. Many cards also act as quests that can be completed (such as pillaging a particular province) whilst others provide a bonus to completing questions. Not all player actions are card driven however, and players will often choose to invade provinces on the board using their leader or warrior figures.

Most actions cost rage points, which act as the in game currency. Some actions (such as invading with your leader) are free, allowing players to do more with their turn. One of the most important features in Blood Rage is the pillaging mechanic, which is when players fight to claim the resource from a province they occupy. During a pillage, the pillaging player gains strength for each of their leader, warrior and sometimes monster miniatures present in the province. Other players may oppose the pillage by moving their miniatures from any adjacent province to oppose the pillage, and when this happens, a battle is fought!

In battle, the number of miniatures in the fight is the base calculation of strength for each player. Players may then lay out one or more cards (face down) to add additional strength or combat modifiers to their attack. Some cards simply increase the overall strength of one side, whilst others confer benefits such as assigning Glory Points to the loser, rather than the winner. In fact, experienced players often use this “Loki Strategy” as a reliable means to win.

This strategy is viable because at the end of each age, any warriors that fell in battle (and were moved out of play and into Valhalla) are returned to their clans, ready for the next age, which begins again with one fewer province (because it has been destroyed) and a new card drafting round. The fact that each age represents a cycle of repetitive gameplay, with each clan developing itself throughout the rounds means that Blood Rage is relatively simply to play (once learned) yet fairly difficult to master. Learning how to draft, when to pillage and when to use cards in battle are all strategic elements of the game that must be considered, as are several smaller features such as the use of longship, the placement of upgrade cards (of which there is a limit per clan) or the deployment of monsters. 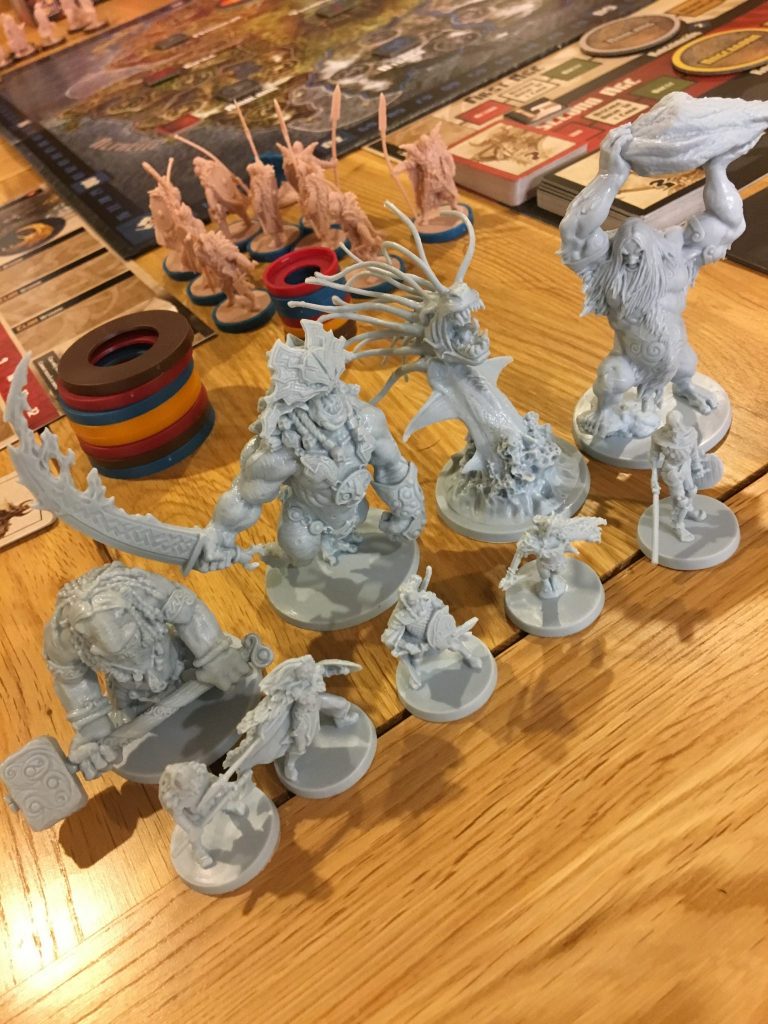 The quick setup and intuitive gameplay meant that I was able to teach Blood Rage to several groups of both frequent and infrequent board-gamers quite easily, and I found that everyone found it simple to grasp and mostly enjoyable to play. Having sold the game to my friends on the basis that it is a resource collection and area control game with card drafting and frequent combat, I was told that I had undersold the amount of combat/direct confrontation in the game, which is probably a fair criticism of me – rather than the game. We all agreed that for a confrontation heavy game, the simple combat mechanic and lack of long-term penalty for losing made Blood Rage easier to deal with than the games that some of my friends actively avoid.

Worth commenting on (but not a reason to buy a game) is the quality of the miniatures and other components in Blood Rage. Much has been said of how well sculpted the plastic figurines are, but it may come as a surprise just how many there are when you open the box. Each of the four clans features eight sculpted warriors, a leader and a ship, and then there are four large monsters and a couple of smaller ones to represent the neutrals. Aside from this, components are pleasingly few, with just a board, a dashboard card for each clan and a range of tokens. 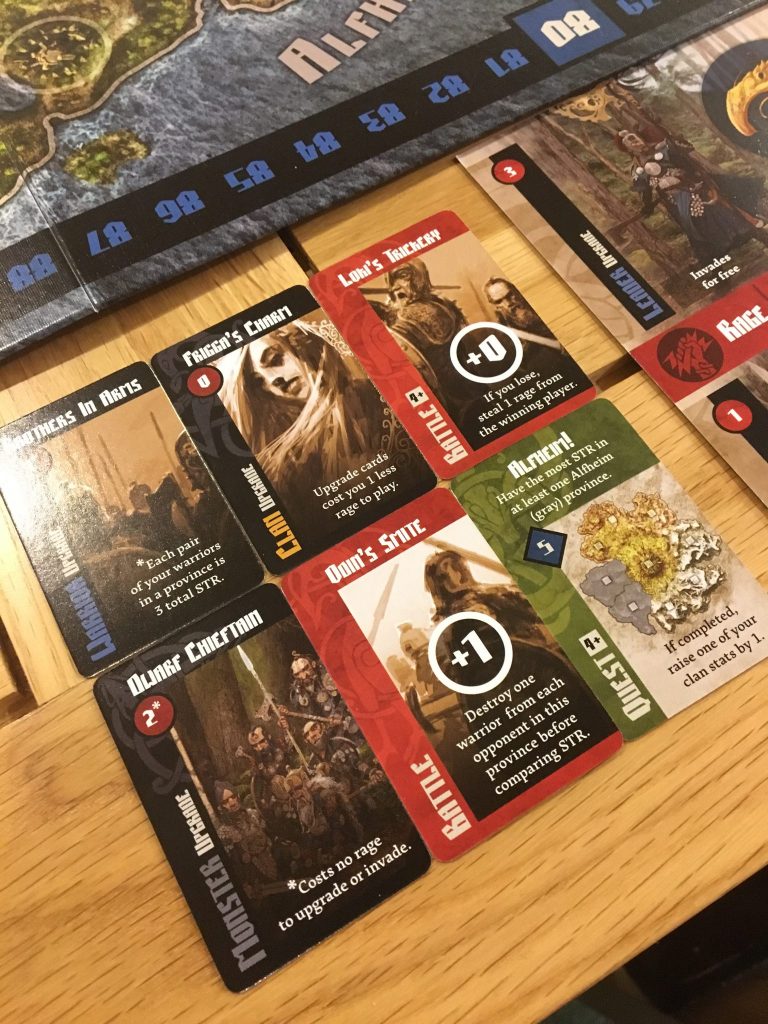 On the slight down side, playing Blood Rage is fun when played occasionally, but it is the kind of game that rewards long term play, and will favour whoever it is in the group that plays most often. In my case, as the owner, that’s likely to be me, and whenever I begin a new game with one or more friends that have never played before, I do find myself really dominating the draft phase, or finding ways to randomise my draft to even the odds a little. I mean no detriment to my friends by doing so, it’s just that Blood Rage (and I guess drafting in any guise) rewards experience. To help smooth this out, I’ve introduced an explanation of the synergies between cards representing each God, ie Thor favours strength, Loki trickery, and Heimdall wisdom and tried to offer some guidance on how to choose a strategy.

If you do find players within your group that like the mechanics and theme, then Blood Rage is only about an hour long due to the small number of rounds (ages) that it features, which makes it a great game to play two or three times in an evening. That’s six or nine rounds of drafting, so with good and bad experiences still fresh in their minds, your friends will become steadily more competitive. The combination of short game time, exceptional component quality and tight, enjoyable gameplay mean that Blood Rage will become a permanent feature in my collection, and will likely be a regular fixture of my gaming nights.