And I will walk five hundred miles just to be your Bannerman!

Seriously, this game is all about walking. Walking, and bucket loads of killing. I will be honest, Bannerman isn’t the flashiest game. It’s art style is somewhat muted and pale. While the trailer does a good job of showing off its combat. Its intricacies aren’t realized until you get your hands on the game. It would be easy to overlook this game but that would be a mistake. Bannerman is a grisly tale about fighting another man’s war and the mental consequences of such actions.

Bannerman really reminds me of The Banner Saga. Aside from both having ‘Banner” in their name, they both focus on long journeys and the ravages of war. The key difference is that Bannerman is from one man’s perspective. This allows for greater insight into the mind of the main character and also the combat, where each hit point matters. 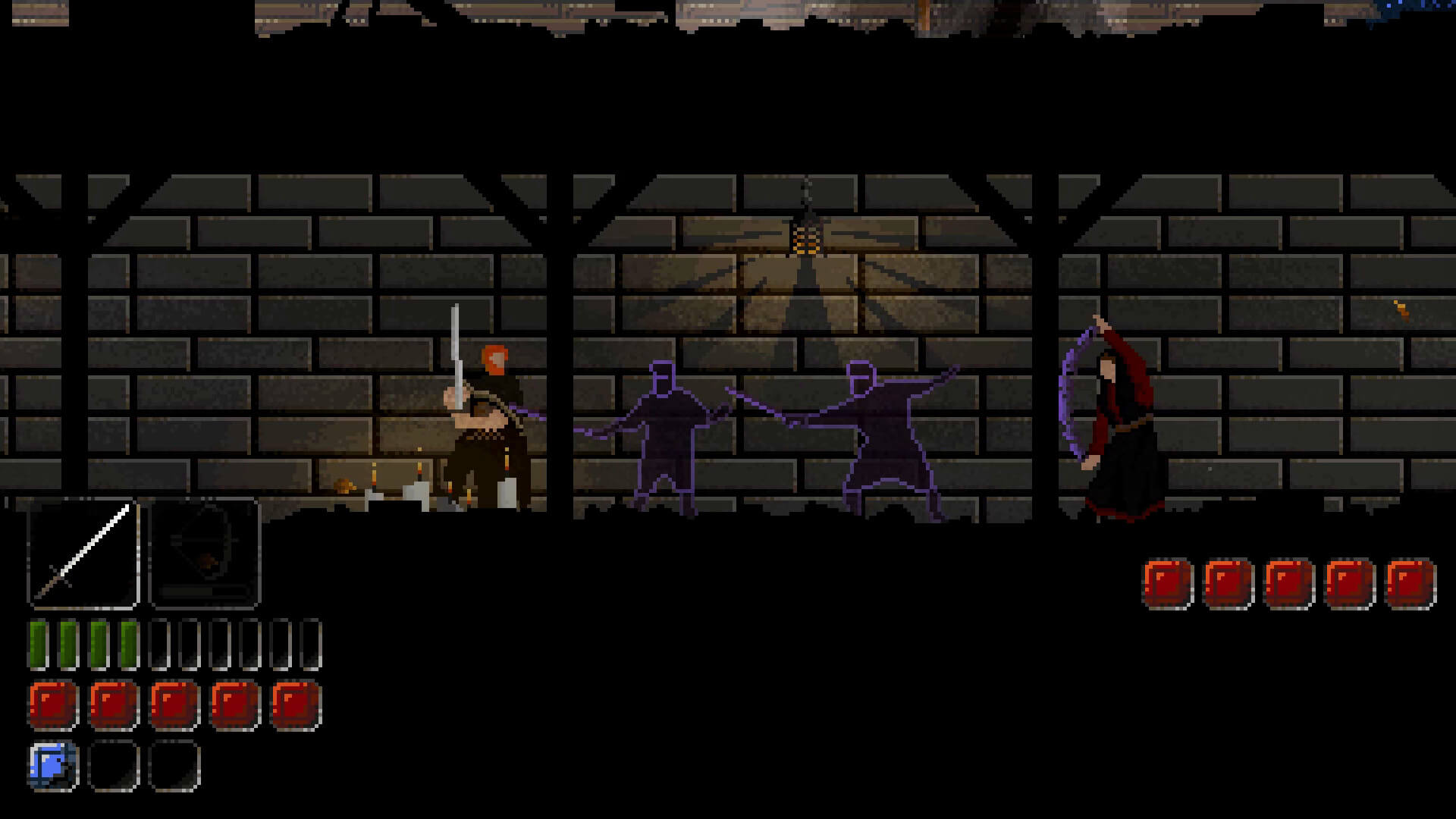 The core gameplay of Bannerman is all about sword combat. This isn’t your typical hack and slash type of game. Matter of fact, charging into fights is more then likely going to get you killed than anything else. Combat is more of a chess game where you wait for an opportunity to strike/dodge while your opponent is doing the same. Dodging is as important as attacking and you quickly begin to learn how to adjusts your tactics based on your enemy. 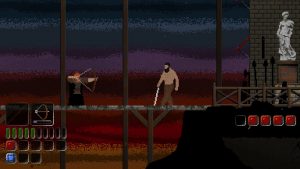 The ‘Bannerman’ has a light attack and strong attack. Each of these can be used in a low or high stance to over come your enemies block. You also can punch, dodge, and use other weapons to conquer enemies. Bows are really good for instance against unarmored foes. Sword and shield are great for taking on multiple enemies or anyone with a projectile weapon.

Enemies also add quite a bit to combat as well. From Knights, Lancers, Archers, and even Wizards, all require different tactics to kill efficiently. Then there are the bosses that just take the rules occasionally and throw them out the window. Bannerman can be a very difficult game, but it does a good job of balancing things. It primarily accomplishes this with armor. While your precious ‘red’ health is taken off with any hit. Armor adds a new ‘blue’ health that is far hardier and, depending on the level, can even be repaired. Bannerman is facing everything alone and it supposed to feel overwhelming on purpose but it isn’t impossible to win.

Avoiding fights is a good idea pretty much every time. While I wouldn’t recommend playing this game with keyboard/mouse combo it certainly is possible with key rebinds. Bannerman just felt like it is made for a controller. So what happens when you die? Well, it depends on how far you are in the level. Each level basically has you moving perpetually left to right. There is a shortcut that can be unlocked somewhere near the end of the level. This usually is right before a boss or big fight. However, if you die before unlocking this checkpoint, then it’s do it all over again. 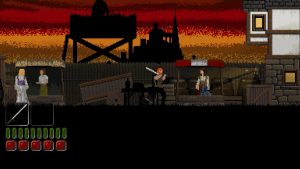 I wasn’t a huge fan of this system, as it leads to a bit of a grind sometimes. The shortcut system isn’t perfect either because while you can move to where you were before. All of your armor and additional equipment needs to be found again. I found the combat satisfying but uninspiring at times. There were moments where I landed a key dodge and skewered my foe — then drank in the glory of vanquishing a foe. On the flip side, there were so many times I took dumb damage that combat’s magic dulled. There was also a glitch I stumbled into a few times where I became locked into a corner, with death nigh immediate.

Finally there are the combat treatises which allow you choose one of two skills. This allows for some customization to your run. It’s not a huge focus but a nice touch nonetheless.

War, huh, yeah, what is it good for, absolutely nothing!

Between missions is the story of Bannerman, and probably my favorite part of the game. Lord Crowley is your liege and his banner is lost in the beginning of the game. You, being the Bannerman who lost it, are on his crap list and have to redeem yourself, despite Crowley being a useless shmuck. This redemption puts quite a toll on the main character and this is ever present during the ‘dream’ sequences between missions.

After completing some sort of suicide task assigned by Crowley, the Bannerman takes a moment to reflect on his own actions. This is where the pixel art really starts getting wicked and using its dreary setting to the fullest. From tentacle monsters, to brutally murdering priests, the concept of war and its ravages are explored quite in depth. There were many times I just wanted to walk away and stop the senseless killing but are compelled to continue due to honor and duty.

One of the most goriest and glorious moments comes when you reach a hallway full of your enemies. As you begin to walk past them they begin to turn into red paste with just a mere touch. These types of moments are pretty awesome and I felt delivered a message far more important than the core gameplay itself. 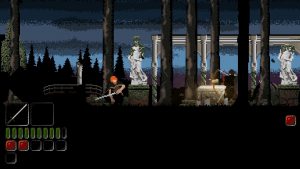 The music of Bannerman is a bit of a coin toss. While the main theme is excellent there are times that I found the soundtrack lacking. Not that it was bad, like it wasn’t there at all. You will listen to the sound of boots and swords clanging far more than anything else. While the music aims to be haunting and it accomplishes that. I just wish there was more sometimes. A+ for boot sound effects though.

One thing to keep in mind is that Bannerman is a rather short game. You could probably complete this game in about four to six hours total. Depending on how many times you die and repeat the levels. There is some replay-ability as you can try different combat treatises but for the most part it’s a one and done type of game. Bannerman also features Steam Achievements and Steam Cards for all you collectors out there.

I’m tired of walking, get me a friggin horse!

Seriously, for a medieval setting there are no horses for our poor Bannerman. Cardio aside, Bannerman is executed quite well. Aside from one bug, I never had an issue with the game. The combat has moments where it shines and then some where you feel dumb. Maybe that’s just me. I definitely found its focus on slow/thoughtful combat quite unique and innovative. At first I thought it would be a drag but quickly found the beauty of it all.

Bannerman is best for fans of retro games or indie enthusiasts. It’s a unique experience and does deserve your attention. Just keep in mind you are going to be walking quite a bit and there is a bit of a grind if you suck at combat. There are things to make up for that though and I appreciated the game for its message on the human mind and war in general.