AfterGlow Prismatic Review For Xbox One 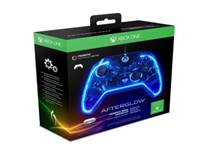 At some point in your gaming life, you will need to replace that worn out to the nub, battered and bruised and gaffer tapped controller. It’s inevitable, just like Justin Bieber providing another awful soundtrack. For me it was time to give up my wireless basic controller for a new wired controller that I could plug my headset in so not to disturb my partners sleep with huge explosions and sounds of gory deaths. Also being a skinflint, I wasn’t too keen at spending around about £100 on the latest elite controller. (That amount of money is saved for collector editions)
So as I do with everything I own, I wafted over to the interwebs and did a little snooping into the matter. One controller soon caught my eye and with little to no persuasion, I jumped in head first and brought the Afterglow Prismatic.

So what’s in the box of colour……ohhhhhh. Well you get the Following: 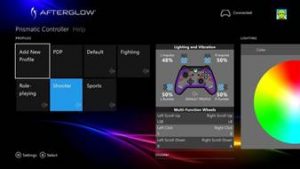 Outside of the see through plastic and fancy lights, someone not entirely versed in official versus unofficial products might not be able to notice the difference. Its only when you flip the controller over where you notice the biggest difference: extra buttons!!
One of the Afterglow’s biggest features is the ability to map six actions to two wheels that are on the back of the controller. This is a nice feature that allows the controller to stand out from the standard Xbox One controller, although it may feel a little awkward from not using these buttons at first. Aside from the extra buttons on the back, PDP has put headset audio controls right on the controller itself. A little button near the right analog stick will allow you to use the D-pad to adjust chat and game audio. It is a really nifty feature, especially when you pair it with any amazing head gear. Like all Afterglow products, the Prismatic Xbox One controller does lights up and is perfect for those late night gaming adventures with the lights off. However, using a somewhat confusing combinations of button presses and analog stick turns, you change the color as well as its brightness.
.

To combat this, Afterglow have provided a Free App, which allows you to set up anything to your hearts content. One great feature is this allows you to set up multiple button profiles for FPS, RPG and even specific people. From here you can also adjust different colour schemes easier or even just set the controller to colour cycling, even the amount your controller vibrates. So now you can change profiles on the fly by using the Xbox One’s snap feature for any game or person you may wish. Perfect. If you can’t be bothered to make your own it has a selection to choose from. The RPG profile on the app, for example, has the controller on 100 percent rumble and vibrations, with the front facing buttons also assigned on the multi-function wheels. The shooter profile is similar but with the rumble and vibration set at 50 percent, and there’s also a Sports profile that has its own unique settings.

While the Afterglow is a fantastic third-party controller, it does have some downsides. First off, there’s a huge learning curve in being able to use a lot of the controller’s unique features. While it was easy once I knew what I was doing, I had to read the instruction manual ( not a man thing ) before I actually knew what to do and how to access these features. For younger players, this would be even more difficult, but that’s where the free App comes into its own. There is also the fact that the controller is completely wired and needs to be plugged in at all times. While this isn’t a huge deal, as the controller comes with 10 feet of USB cable, and if like me, you will use the USB port on the side of the Xbox.
The design, construction, and functionality of this controller are on par with your standard Xbox One controllers, but they are a much cheaper option over the new Xbox One Elite Controller.
While the premise of the controller may seem a bit gimmicky, as it is called “Afterglow,” the customisation makes the controller feel personalised, which cannot be matched, and sets it apart not only from other third-party controllers, but also from Microsoft’s own first-party controller itself. Playing with the controller is smooth and thanks to no battery, lighter, brighter, and cheap. All in all a big win and highly recommended.
Afterglow PrismaticTechXbox One
0
Share FacebookTwitterGoogle+ReddItStumbleUponEmail