It’s okay, I think, to be disappointed by something when you first see it. I felt this way when I opened Res Arcana — a game I had heard so many good things about — only to find what seemed to be a very meagre set of components. It’s also okay to admit when you’ve been so, so wrong — just like I was when I jumped to conclusions about this fantastic game.

Res Arcana, which is a two to four player game that works so much better at exactly two players, is all about being the first mage to earn ten points. You’ll do this by choosing one of two randomly drawn magi, then by using their starting ability (a modest resource draw) and your own wits to gain control of places of power, monuments, artefacts and spells. 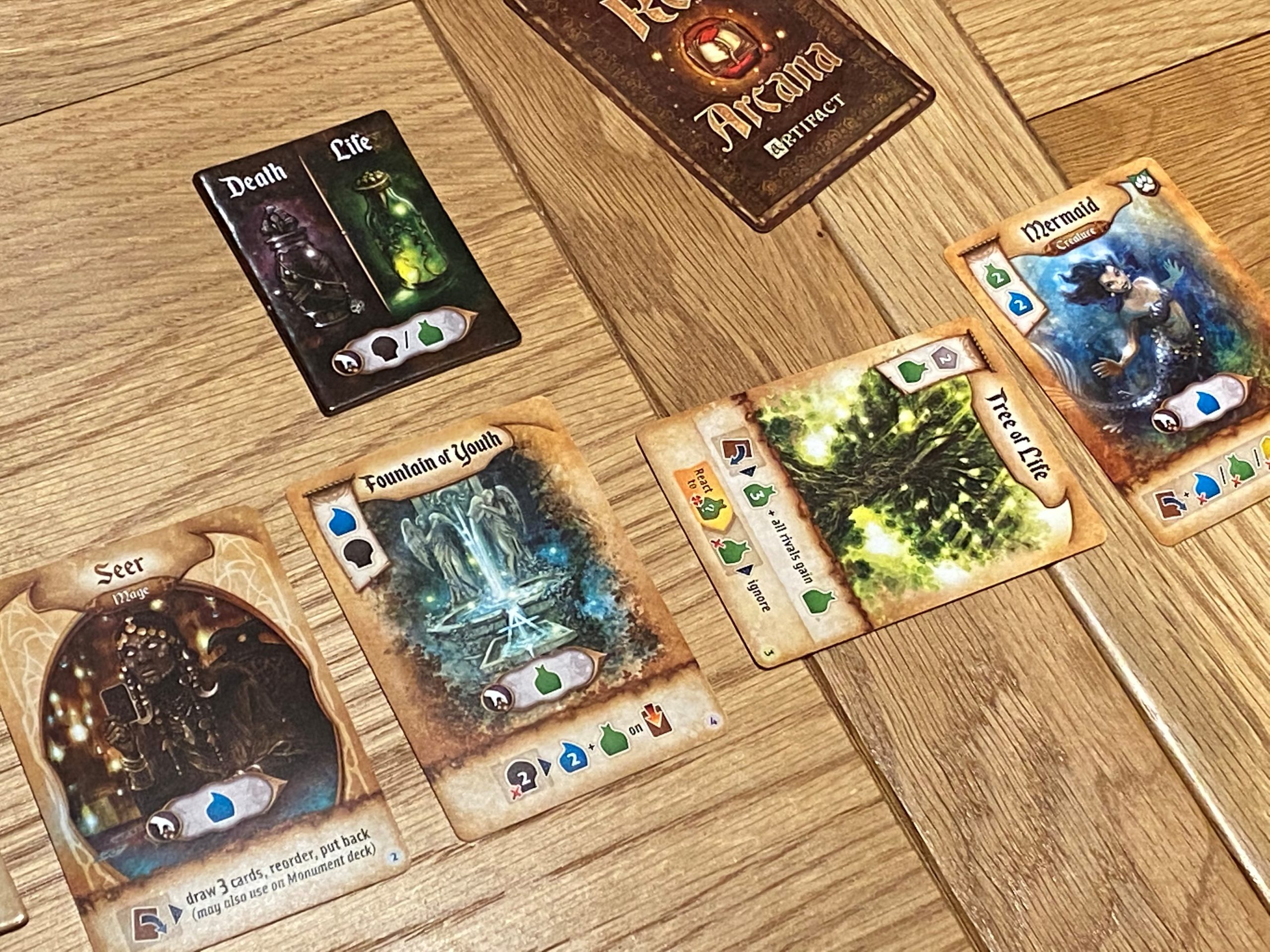 Every turn, each player chooses one of the standard ability tiles and places it in front of them. The players then draw resources (blue, green, red, black and yellow) based on the passive effects shown on all items in front of them. Such draws can be on their mage card, on the ability card they chose, and on the other items they have earned over previous rounds. On the first turn, it’s just your mage and your chosen ability. 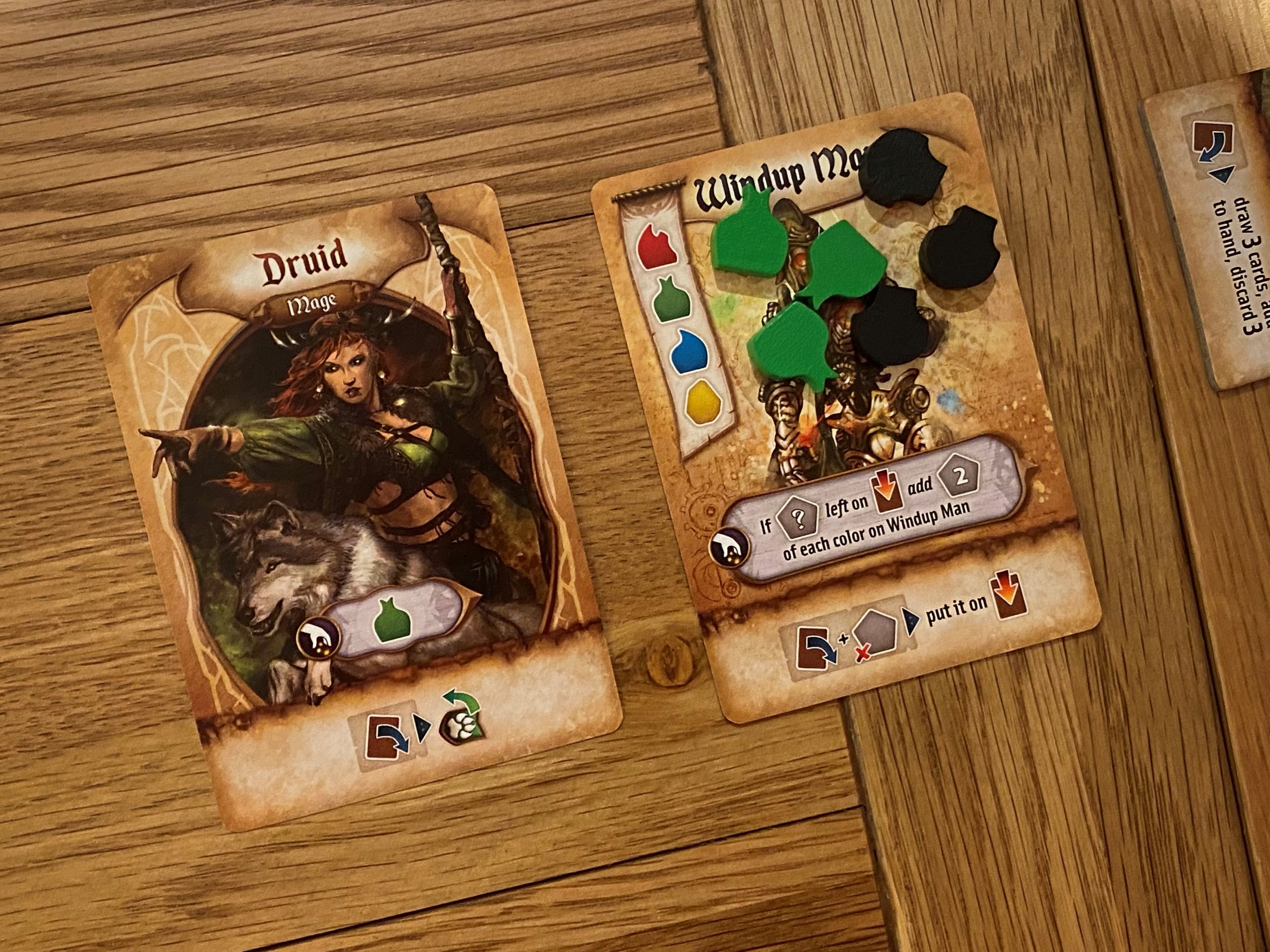 With these resources, the players will then take turns to take actions. Actions include playing a card (paying the resource cost shown), activating a card (doing what is shown on it, often turning it sideways to show it has been used in the process) or purchasing monuments or places of power (later in the game). The first turn, again, won’t last long because each player will only have the resources to do a couple of things — although more resources (excluding gold) can be generated by discarding one of your cards as an action. 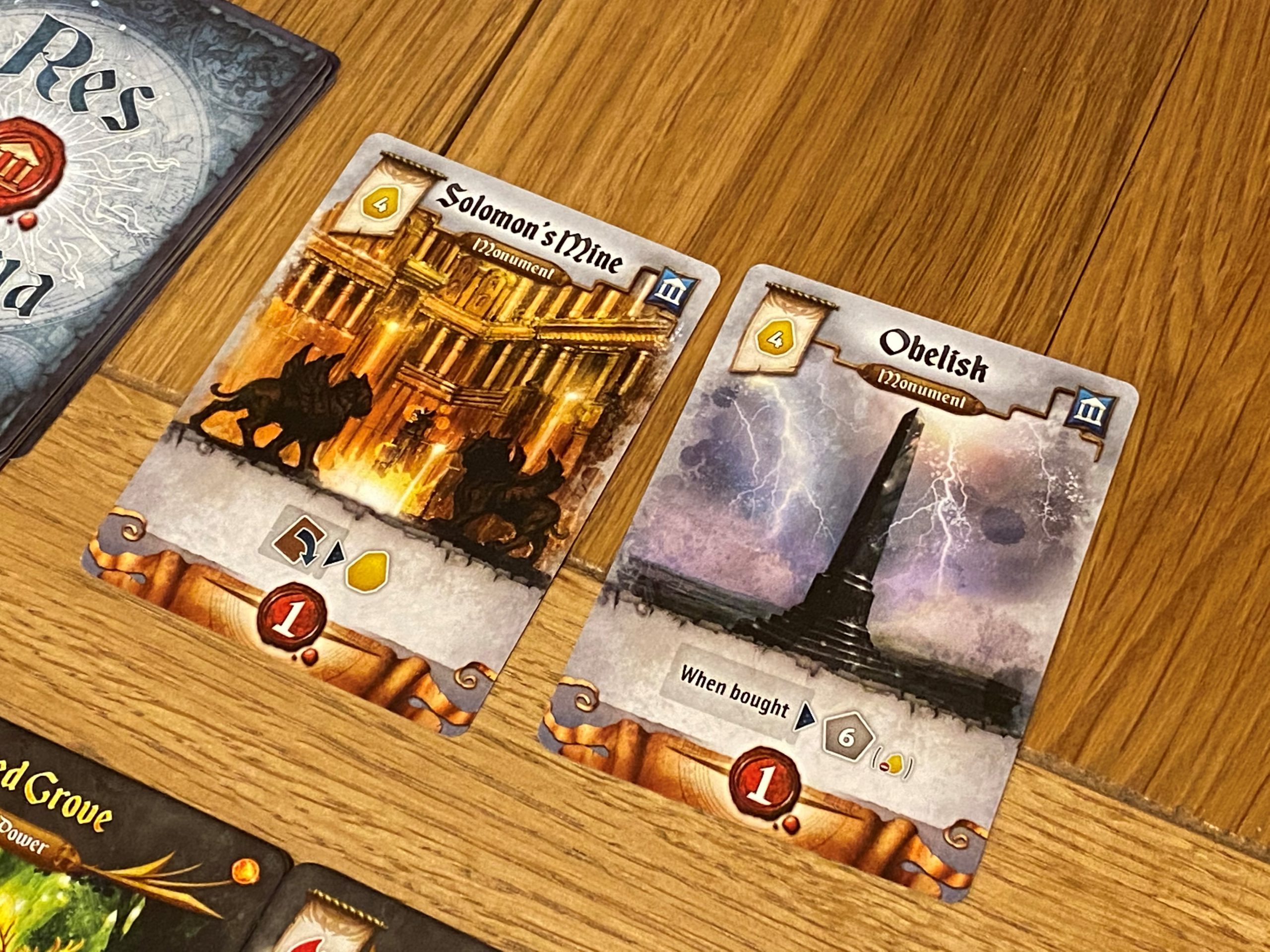 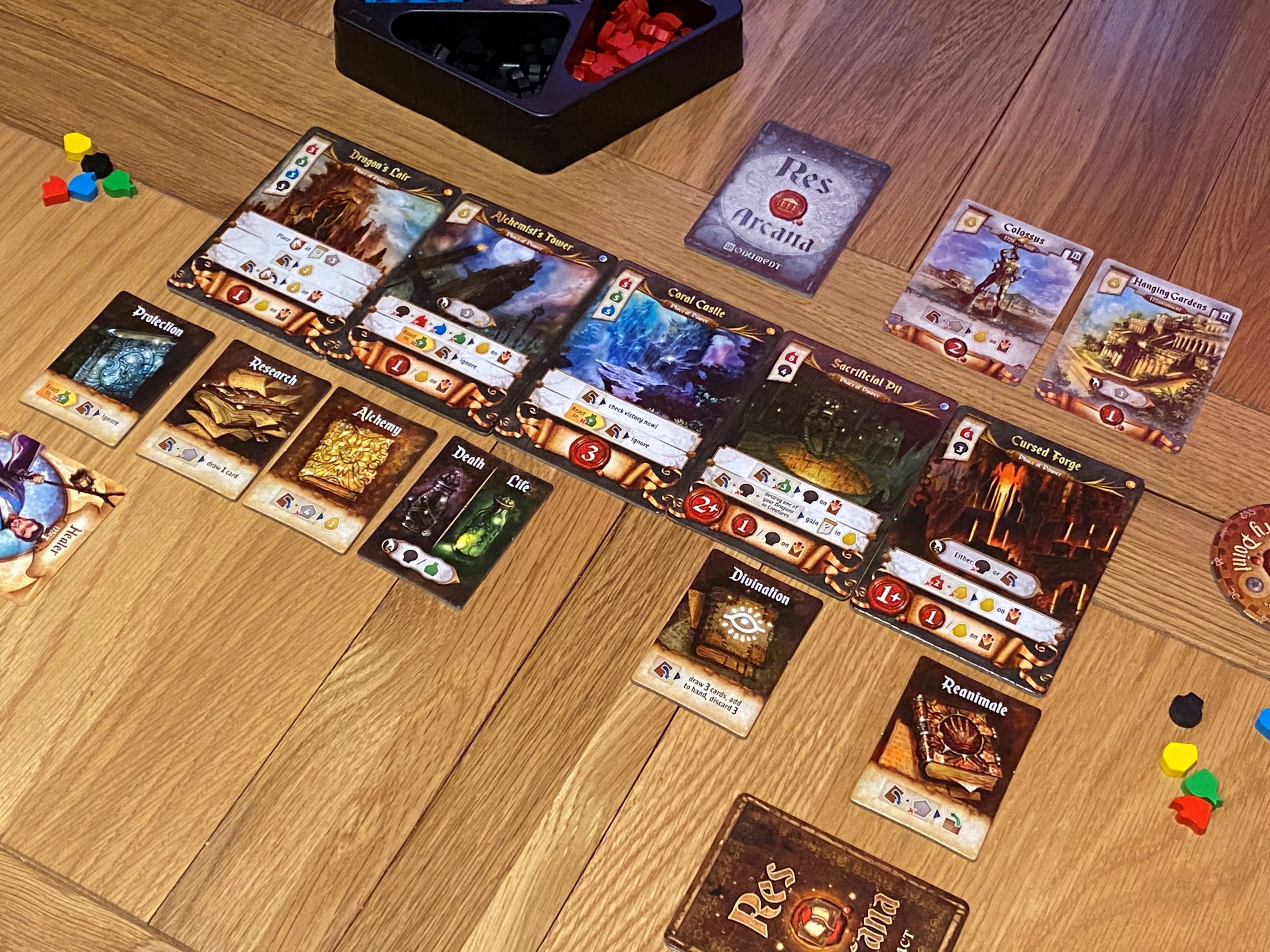 What really sets Res Arcana apart from some other tableau-building games that I’ve played is that whilst it has relatively few components (only five double-sided places of power, a small monument deck, a smallish deck of artefacts and spells) it is not afraid to challenge the players. A huge part of winning Res Arcana is found in using your chosen mage and starting cards to create a combo that you can then build on. 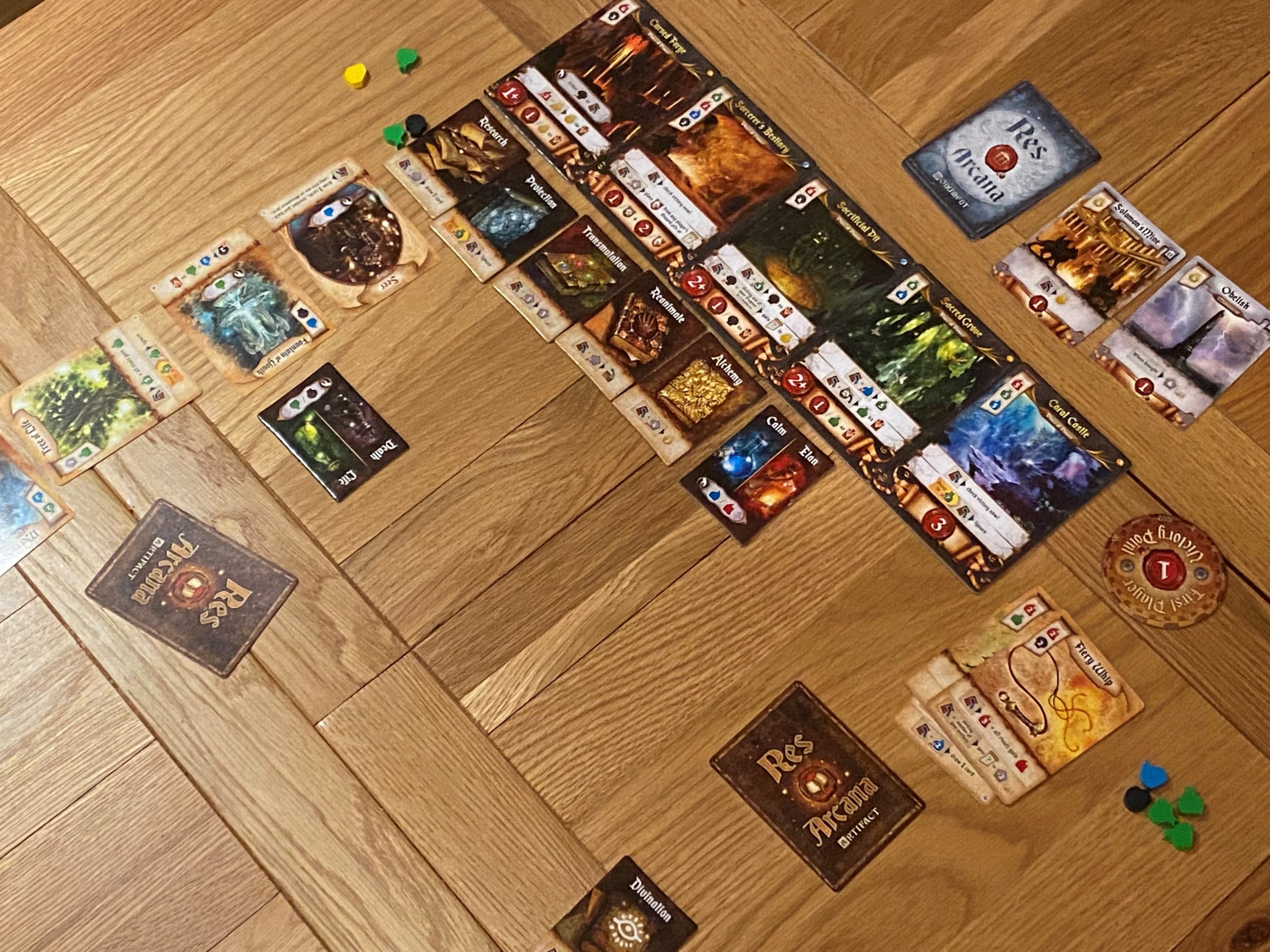 As each game of Res Arcana goes on, these combos reach expert level and things escalate quickly. With only five or six items in front of you by about the third round, you’ll want to be drawing numerous resources, generating others on your cards, using other abilities to play cards for free and ramping into some of the “expensive” creatures like golems or even dragons, which can potentially damage your opponent’s resources, or even exhaust their items — damaging their engine. 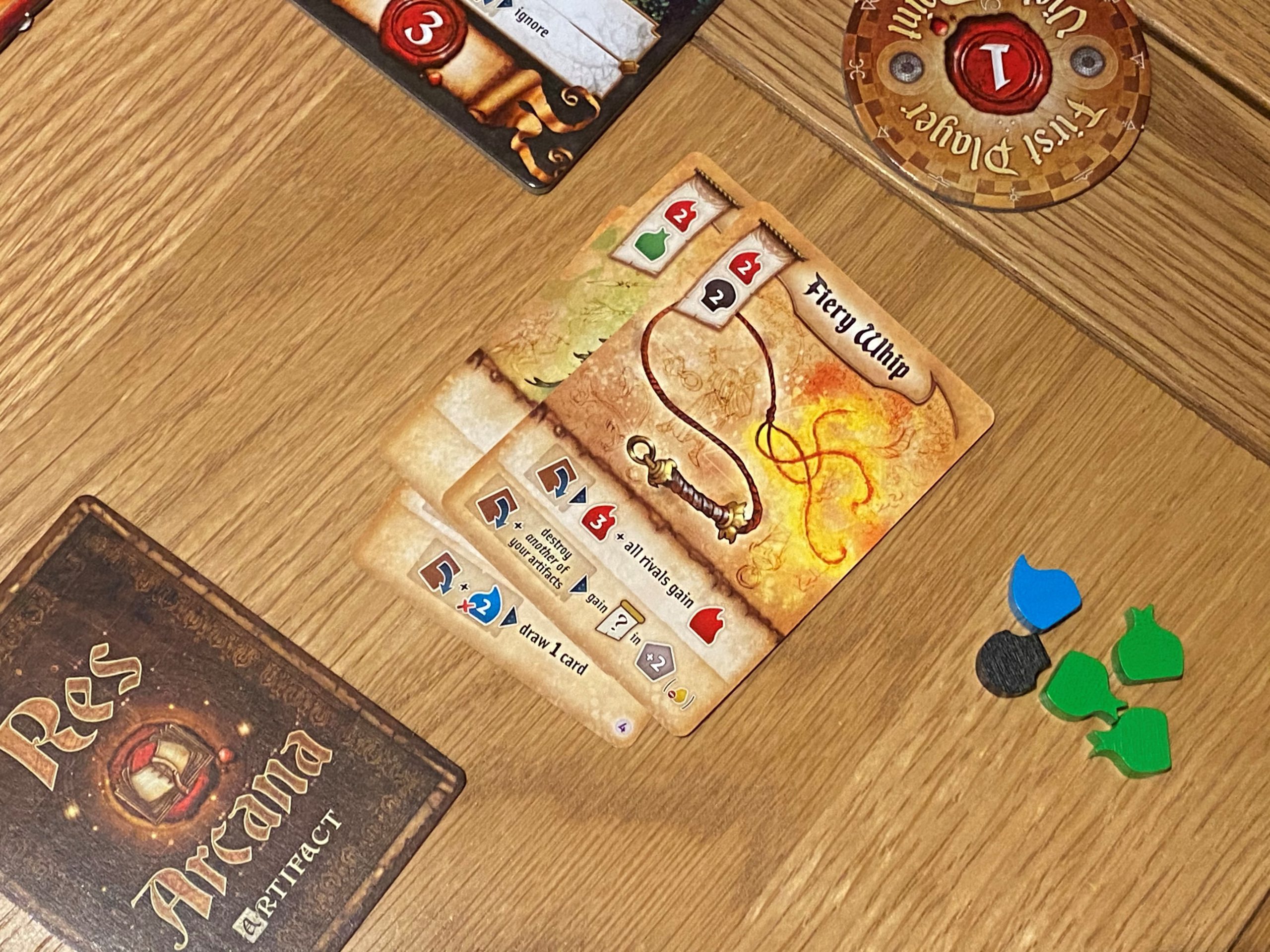 This rapid ramp up from nothing to incredible power means that someone will reach ten points within about 30 to 40 minutes — maybe less at two players. The relatively abstract nature of the directly confrontational elements is also welcome, leaving Res Arcana feeling tight and competitive, without much (any in most games) fighting or creature destruction. This short game length is somewhat enforced because only a small number of cards are dealt each game, with the rest being put back in the box, rather than being used to form a market or draw deck.

Overall, Res Arcana, is an attractive, strategic and brief game that rewards intelligent play and gets better the more time you spend learning it. The box might seem a little sparse at first, but because only a few cards appear each game, replay value remains high. Fans of combos, tableau building or engine creation with a dose of fantasy will love this one.

You can find Res Arcana on Amazon.