Reinventing Chess: Having a Go At Microgons

Chess is perhaps one of the oldest games in existence, dating back to 6th century India. It is no surprise then that ‘reinventing’ chess has long been a goal for the human species. Variants such as 3-d chess from star trek have captured our imagination, along with references in pop culture such as in the Big Bang Theory. Microgons try’s its hand at this task, creating what it calls “Hero Chess” 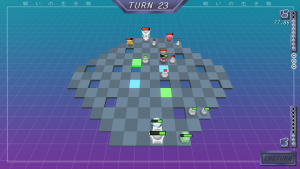 Controlling a group of little chess pieces, the aim,  of the game is to kill the enemy king by attacking it repeatedly with your units. The different modes allow you to play against strangers, your friends or just practice against the AI. Game play consists of moving your pieces around the board. Pawns can move forward or to either side, with a set number of tiles the can move. Other pieces move like either a rook or bishop, also with a set amount of tiles. Each piece has a basic attack where it just rams into another piece, as well as a special ability which is different for each piece. One might throw a stick of dynamite that can bounce from one unit to the next, a personal favourite of mine, while another is able to raise the last friendly piece to die anywhere around the reviver.

These special abilities, or ‘spells’ have a certain number of points required before they can be activated, and then use them up. Every turn, you get a point of mana, which can either be used, or saved up for a more powerful spell the next turn. More powerful spells require manas, as is to be expected, such as the aforementioned reviving spell, which costs 4 mana. This spell can easily turn the tide of a battle by bringing back a unit from the dead, albeit a weakened unit. 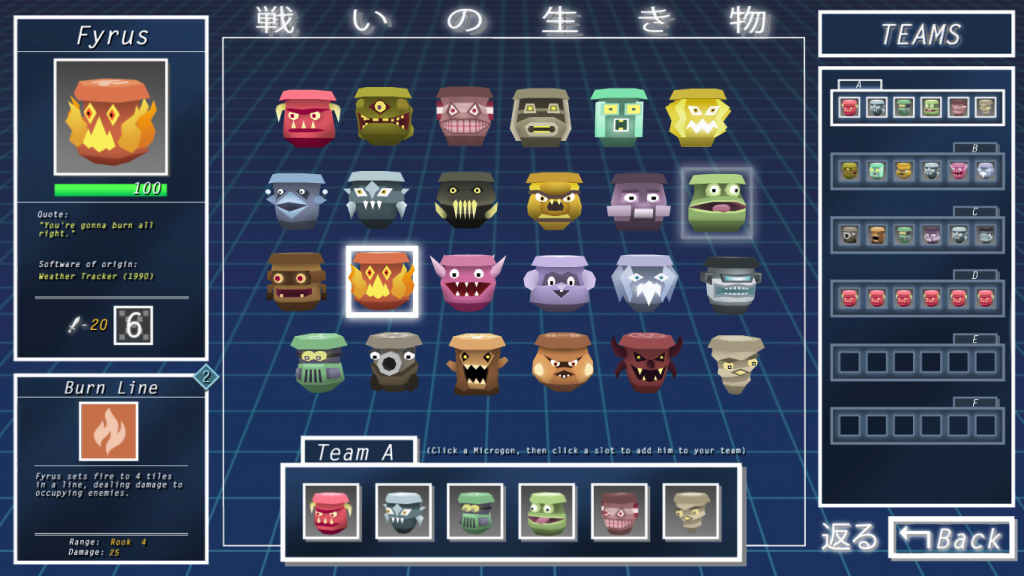 You have a choice of 24 different playing pieces to form a team of 6. Multiple teams can be made, and you can select which one you want to fight with before selecting a game mode. The design of the characters does provide a slight hint to their abilities, but I would recommend playing through a pile of practice games to learn what they all do. Each piece has a set damage they can attack with and a set health, though both of these can be boosted by special tiles on the game board. Also present are pawns, which are placed in front of your hero pieces during setup. During setup you have the ability to place your king and 4 hero pieces anywhere on the back two rows of the board. Each of these pieces has 3 pawns attached to it in front, forming the front line. A mechanic that took me a while to notice was the fact that if you put two hero pieces next to each other, so two pawns overlap, the pawns will combine into a level 2 pawn, with more health and damage. This opens a ton of new strategies, consolidating your forces  instead of moving troops around the board. 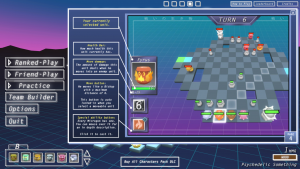 Microgons features a very robust tutorial, explaining the health system, attacks and much more, even some stuff that I didn’t know about even after playing a few dozen games. The tutorial is nice and concise, consisting of 5 annotated screenshots, giving you the information quickly without boring me out.

When starting a game, some RNG comes into play with the formation of the board, which, whilst conforming to a circular format, is dotted with holes and power power-up tiles. Green tiles give you health on the next turn, while blue tiles increase your damage. This randomness of the map makes it very asymmetrical, which can either be a blessing or a burden for the play style you picked for you team. 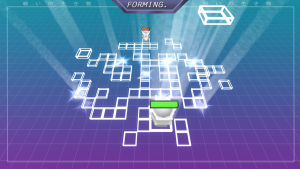 Games have a timer to encourage speediness, with about 70 seconds or so to consider and plan your 3 actions every turn. Winning games will net you MMR points, which in turn slowly push you up the in game ladder, starting off in wooden rank, then climbing up past silver gold, eventually reaching SUPREME ranking. As you go up the ranking system, you will get placed against better players, until eventually you get ranked the highest and win a million dollars or something, I dunno, I’m terrible at this game.

I d’ont even have words to describe Microgons art style, other than the fact I think some graphic designer from the 70’s took a few tabs of LSD and had a go at making a video game. It is beyond weird, but somehow seems to work well with the game, pulling it all together. Microgons is a fun re imagining of chess, giving me a thrill from strategy combined with a whole new level of strategy from picking and choosing between a dozen unique units.