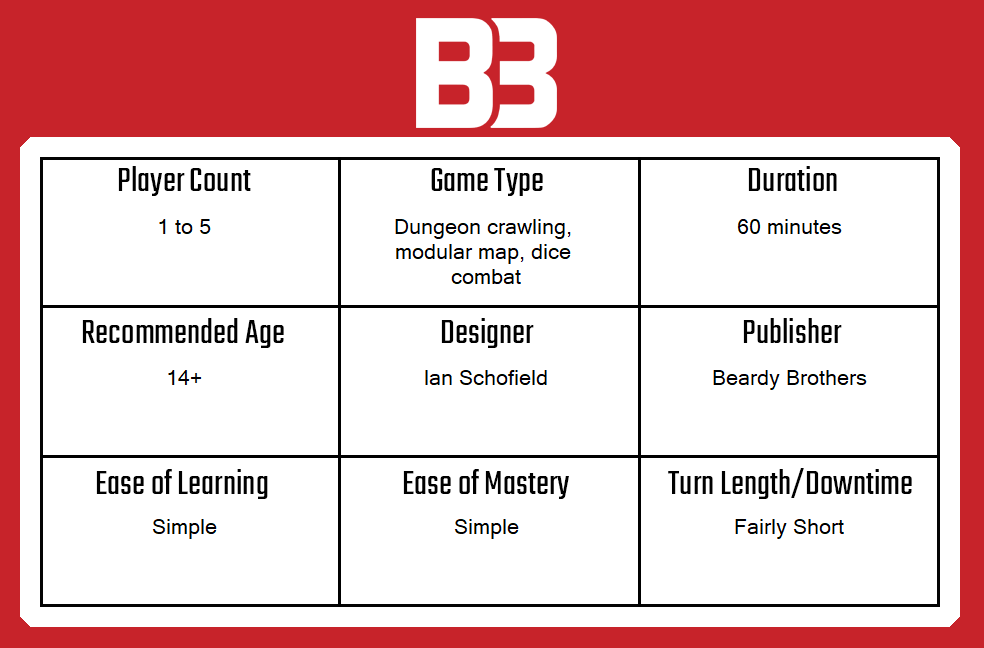 Have you ever read Ian Nicholls’ ‘Orcs’ series of books and wondered what it might feel like as a board game? If so, Ravage feels like it might be a reasonable stab at it.

Playing as a band of savage orcs either cooperatively or in a competitive Treachery mode, up to five players delve deep into the darkest dungeons to face down enemies, collect teef and attempt to prove who among them is the ‘ardest orc of all. Bosses will be faced, ‘eads will roll, squishy humies will be, erm… squished. That’s enough orc talk from me, but you get the idea — it’s a game about orcs and, as you’ll find out later, it’s rather good. 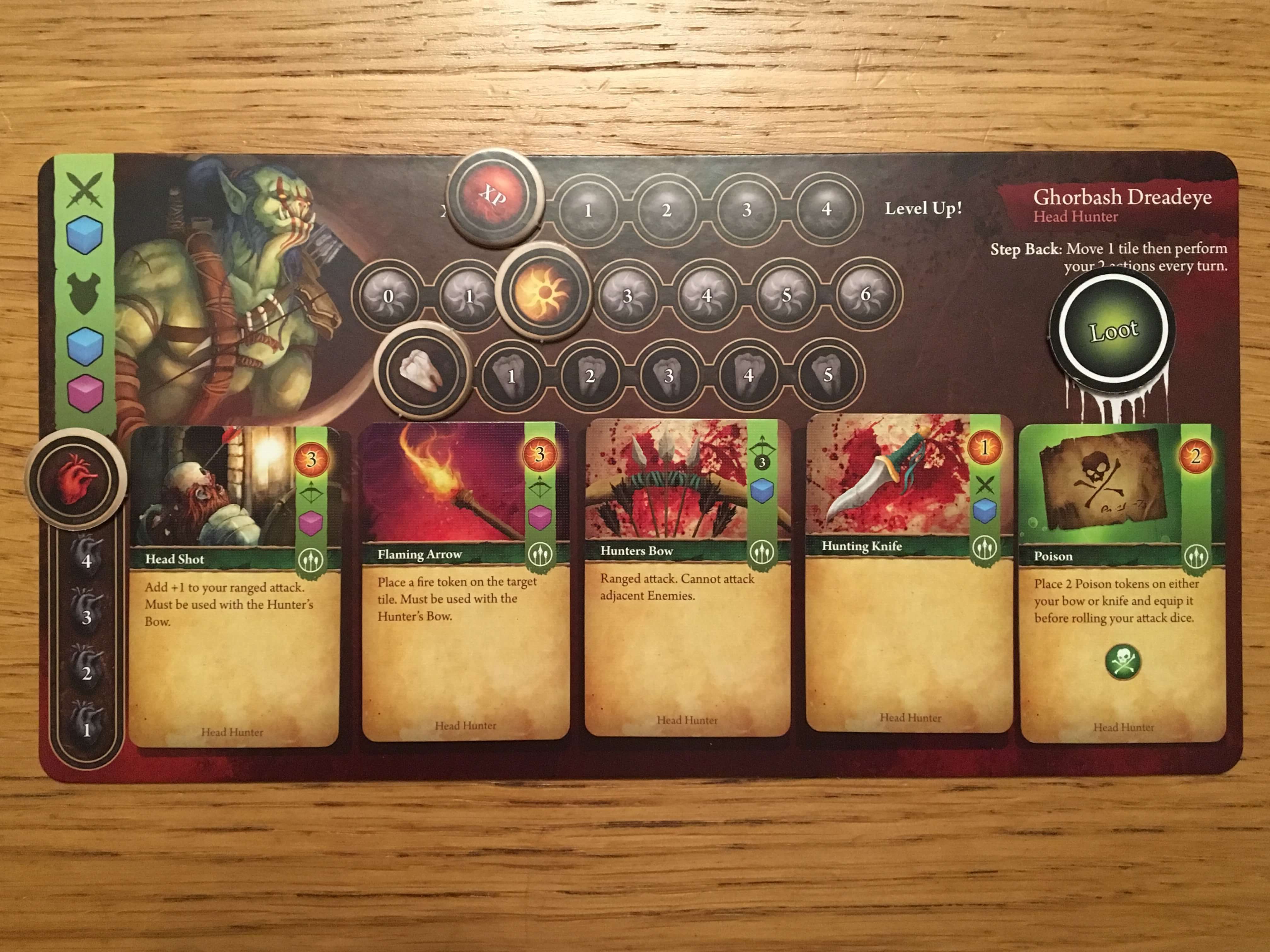 With solo, cooperative and competitive modes to choose from and featuring a number of diverse quests which can be played either independently or as a campaign, Ravage offers a lot of value for a relatively small box. It uses a randomised, modular board that builds out as the players explore, with simple and fairly minimal restrictions in place to dictate how each new dungeon card is placed. During most quests, the deck is seeded with boss encounter cards; when these are revealed, the boss spawns along with their own area, which might be made up of, say, four cards in a particular pattern.

To explore this dungeon and exploit the creatures and treasures within, each player takes control of an orc standee and the matching player board, as well as a deck of cards. Every orc belongs to a different class (such as headhunter or shaman) and has a different set of abilities among the cards.

During setup, each player chooses only a subset of the cards available to their class, which has the effect of ensuring that the characters themselves are often different with each play. You can also upgrade abilities to more powerful variants through experience, which you gain when spending energy on abilities.

Often, an enemy spawns as the result of the players delving deeper into the dungeon. Usually, because the players act first, it’s possible to kill these enemies quickly and effectively. If the players somehow become outnumbered, Ravage really ramps up the punishment. Thankfully, the players can prevent further delving if they are struggling to contain the current number of foes, which introduces a bit of tactical nuance — albeit at the cost of forward momentum.

During each turn, players can also spend the teef they gain for defeating foes on items sold by The Sneaky Goblin, who seemingly follows them around the dungeon like one of those chaps selling knock-off sunglasses on the sea front at any popular Mediterranean resort.

There are a few other things to do, such as searching for plunder, resolving enemy movement (and/or attacks) and a bit of housekeeping, but otherwise Ravage keeps the focus simple — it’s about exploring, fighting and growing stronger. In the standard cooperative mode, all players win or lose together — either when the objective is completed or when someone dies and there is no resurrection token to bring them back to life! 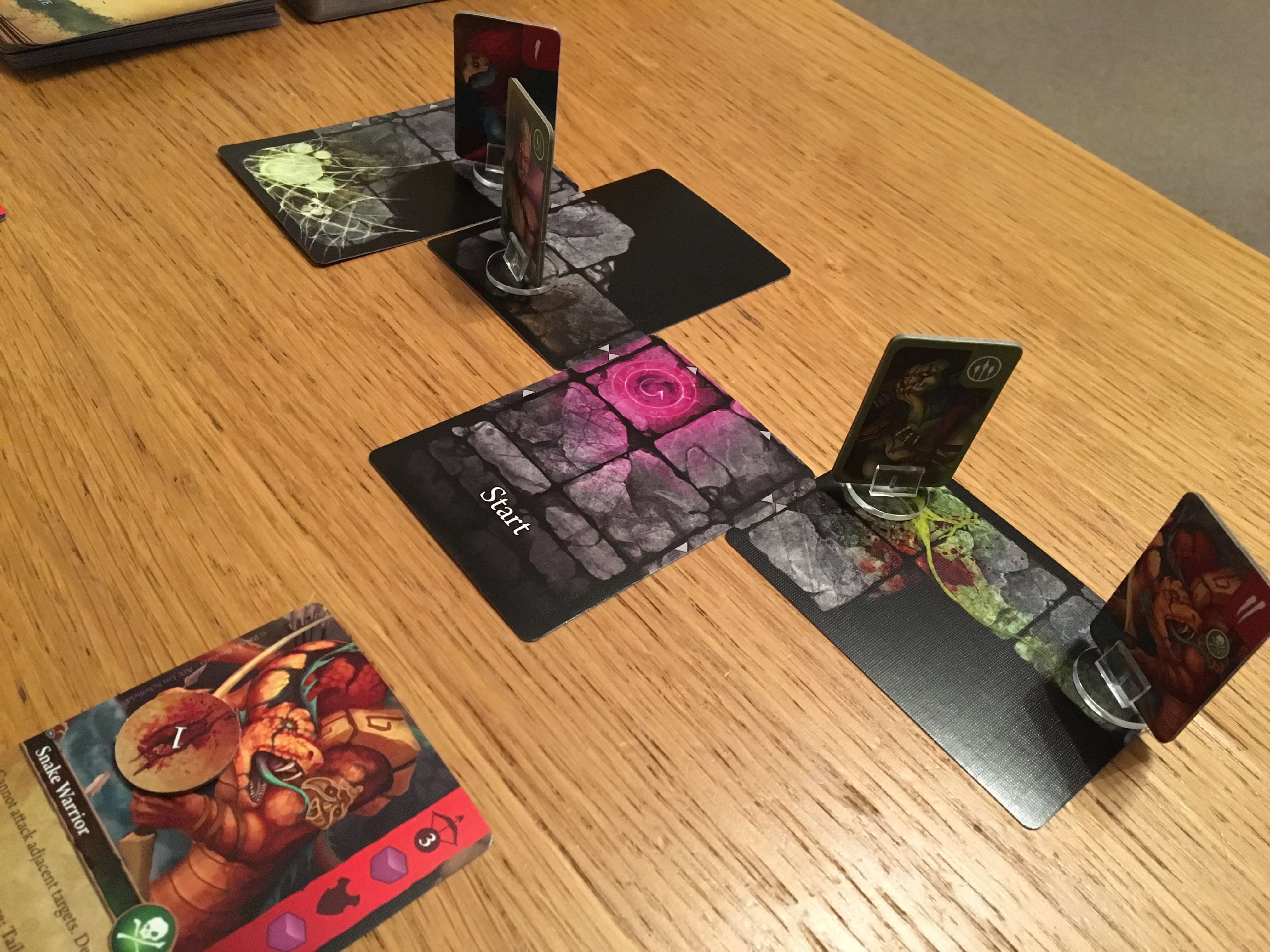 Ravage is actually bundled in a densely packed (partly because of a debatable insert) and fairly small box which comes complete with exceptional artwork on the outside, matching the components elsewhere. It consists of a number of attractive decks of cards, a handful of custom dice and the very attractive, double-sided player cards. It also has large number of standees to represent each player character, as well as the enemies they will face. Every single one, again, features exceptional artwork that brings the creature or class depicted to life in eye-catching fashion.

The delve cards that make up the board are each drawn from a deck and placed face up on the table. Made of a proportion of black space and a number of spaces representing the corridors and rooms around the dungeon, some cards have special locations like healing fountains or spawn points, whilst others can spawn boss locations comprising multiple tiles. Enemies, on the other hand, spawn from the Seek Glory deck and each one uses a system of symbols to indicate which standee it matches.

Probably the most attractive single component in the game, the main player boards feature well-laid-out places for character skills chosen, teef, health, energy and experience counters. The skill cards that slot onto these are smaller than normal and feature clear, straightforward artwork that offers easy access to key information. Each orc has a special ability shown in the top right and this (along with everything else you’ll need to know) is clearly visible on the player boards.

The remaining components are made up of a whole host of tokens, plus an attractive, easy-to-use manual which will enable you to teach and play the game very quickly. My manual (from the Kickstarter release) had some omissions, but before I even received the game, a new version was already available digitally. Based on that version (which is what I expect most players will receive) I have no complaints about the manual at all. The tokens are all thematically relevant and there are certainly a lot of them, most of which relate to specific characters or missions. 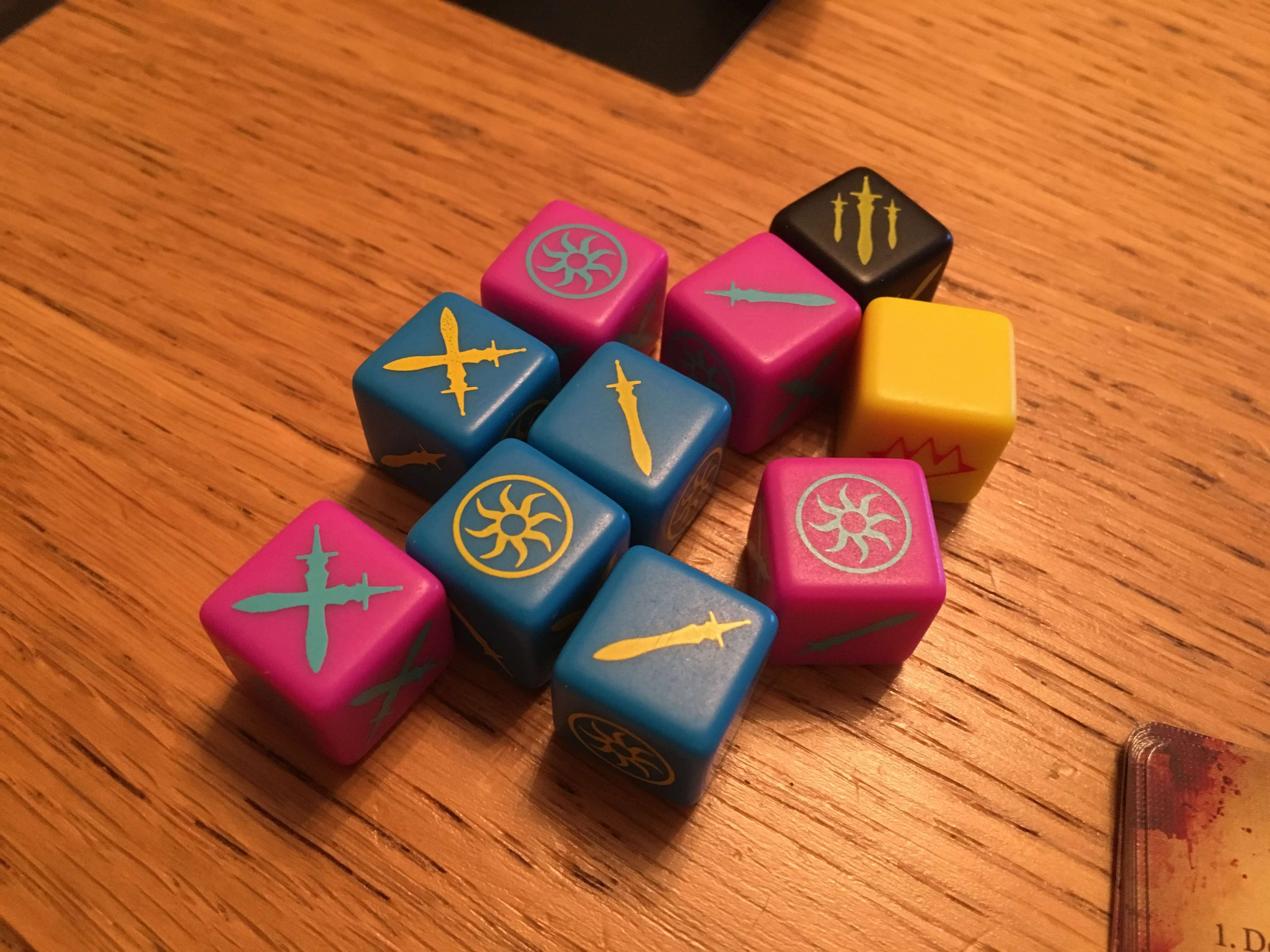 During each round of play, every character takes a turn consisting of five separate phases. First of those is Delve, which simply involves drawing a card from the Delve deck and placing it in a legal space alongside one of the existing cards to build out the board. Next, the player Seeks Glory, which is an interesting way of saying they spawn a monster or trap. Again, they draw a card and on this occasion, add the relevant monster standee to the board, with the card placed above the hero who drew it (which demonstrates who it aggressive towards).

The Ravage phase (the main part of the game) is next. During this phase, players can each take two actions, which will often be move, then attack; but may also be attack, then attack again; or move, then search for plunder etc. Because this phase happens as soon as the player spawns a monster, it’s not uncommon to attempt to kill the monster immediately and perhaps try again if it survives, or maybe search if it doesn’t. Leaving an enemy alive is bad, because the next phase; Bloodshed, is when the monsters begin to fight back.

Unless you are playing with an Evil Overlord (one of the variant options), all monster movement is automated. Monsters basically move towards the player that they are currently aggressive towards (or away if they are a ranged attacker), then launch their attacks. The bosses have slightly different patterns based on their specific makeup, but all of them are straightforward to drive and their whole turn takes maybe thirty seconds to resolve.

Lastly is the fifth phase of the turn, Gather Strength, which is a bit a cleanup phase, really. Two things happen during this phase. Firstly, if the hero has managed to fill their experience bar, they may reset it back to zero and flip one of their skill cards from level one to level two. Secondly, they draw three cards from the Sneaky Goblin deck and, if they can afford any of them (and want them), they may pay teef to add them to their inventory.

And that, friends, is it — play continues following these five phases until the players either win or lose. 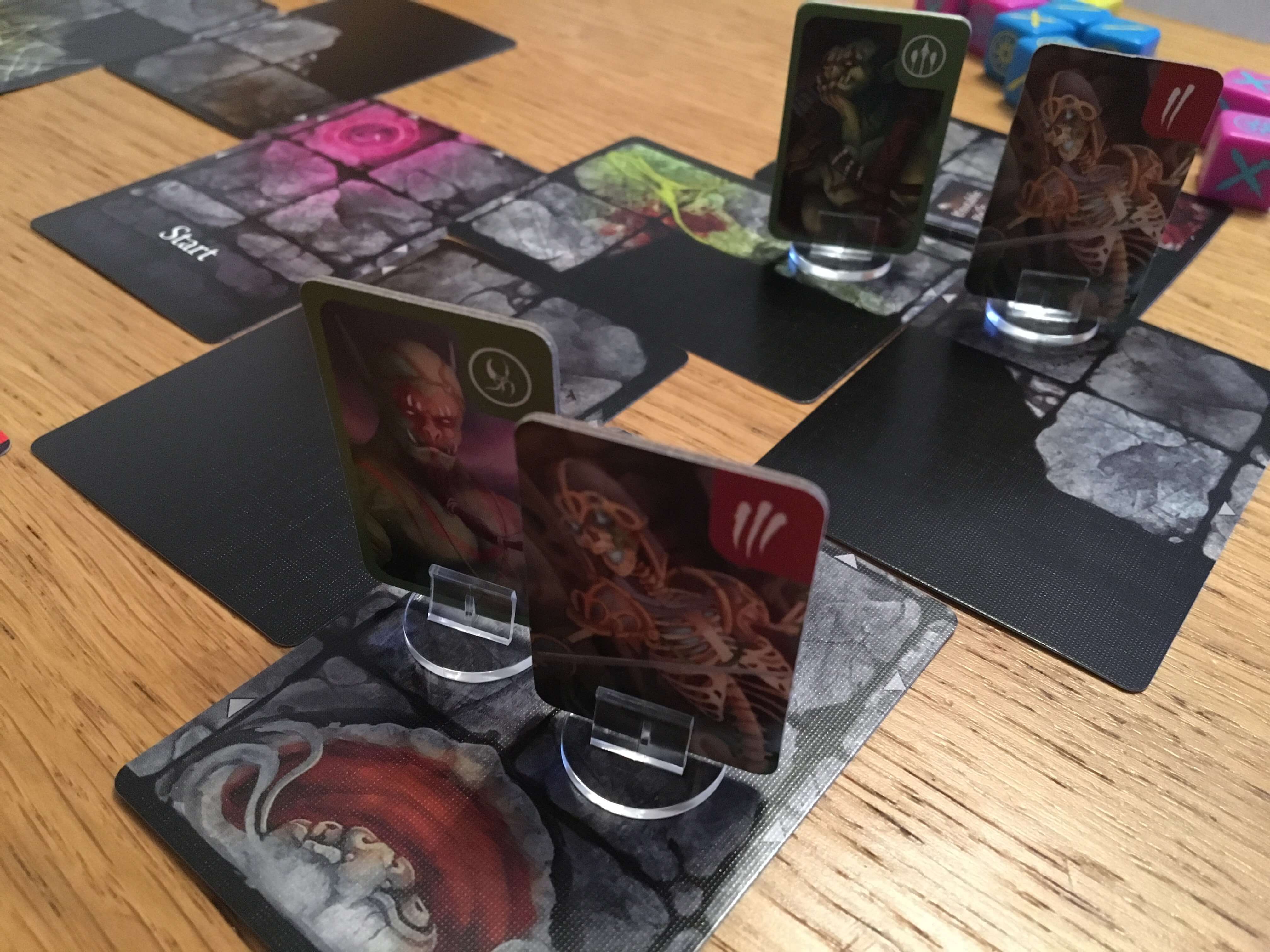 As I explored the world of Ravage and worked through the various different ways to play it, my overarching feelings about it all pointed to how accessible it is, how quickly it can be played and how it is so very undemanding. Whilst there are many more genres that demand much more from players (war games, heavy eurogames and so on) it’s not uncommon for dungeon crawlers to be incredibly involved and fairly demanding — Ravage is the complete opposite. I played it on the smallest table in the house most times and many of the games I played lasted only thirty minutes or not much more.

Ravage also looks good, which is a good thing to have in combination with light, appealing game play. It’s never a problem to entice people to get involved in Ravage, which is something I really appreciated about it. I’m also tempted to suggest that whilst there is a lightness (or at least an immediacy) to it that makes it feel a little bit short-lived, it also uses features like randomised skills, variants, alternative modes and the ability to level up to keep things nice and diverse.

A single game of Descent, for example, might take a whole evening. A whole campaign of Ravage might take only two or three evenings, but when I really think about it, it’s very rare that I’ll play a game for long enough to experience either a whole campaign or, indeed, more than four or five complete gaming nights. What Ravage makes up for in longevity compared to other titles, it more than makes up for by delivering a traditional level of depth in a much more immediate fashion.

In terms of mechanical depth and soundness, Ravage never misses a beat. Sure, it’s a game about dice combat, but the quantity and quality of dice rolled can be influenced by the use of the various powers, weapons and items at the disposal of each character. I also like the simplicity of how the map builds, but in particular I like the boss encounters that come with their own rooms and circumstances. I even enjoy the sub-bosses, which take the form of three human heroes with powers and strengths similar to the orc characters themselves. 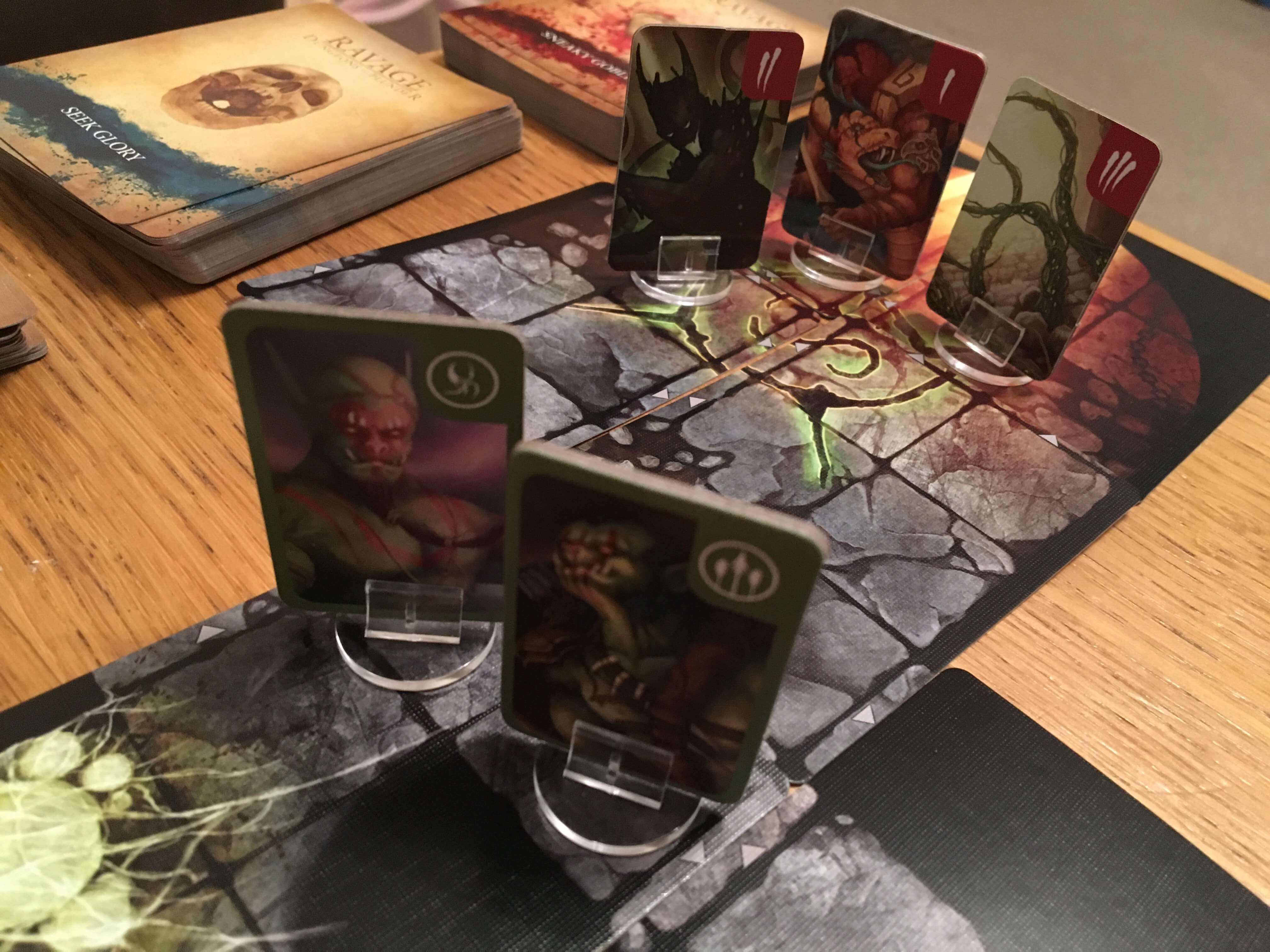 Whether or not Ravage is a suitable game for you will likely depend on what you’re looking for. If you want to experience almost everything that a good dungeon crawler can deliver, with next to none of the complexity, cost or time-consuming setup and teardown, I don’t think there are many games that deliver what Ravage does. On the other hand, that efficiency comes at a slight cost of longevity — though with so many different ways to play, I’m yet to find the limit of what Ravage is capable of.

Consolidated down into a smaller box, Ravage would probably be quick and compact enough to be a travel game, but I never felt that it was lacking in features or missing the key ingredients that much larger, more elaborate games have. As a result, I recommend it highly, and it might just be the perfect gateway game to use to introduce your friends into this specific and very popular genre.

A copy of Ravage was provided for review purposes. You can find out more about it on the website of publisher Beardy Brothers.