The path virtual reality took in video gaming was a stony one. The 3-D Glasses for the Sega Master System were as gimmicky as they were a strain on the eyes. The Nintendo Virtual Boy was a complete train wreck. In recent years virtual reality has returned with more content, more hardware and more companies involved than ever before. One of them is Radical Reality, makers of the Extreme Machine.

The Extreme Machine is described as a “virtual reality simulator” and it is certainly more than another pair of goggles. The apparatus consists of a platform the user stands on, a fan to generate wind and, of course, the actual 3D goggles. A nice extra is a monitor that allows others to see what the current user is going through.

The platform is mobile. Depending on the software running, it will either translate virtual movement into physical movement or function as a joystick-like controller. Balancing skills are not needed —the device also has a handrail to cling to. Surround sound is provided by speakers in the goggles.

What does the Extreme Machine actually run? Primarily simulations of rollercoaster rides, skydiving, wild rafting and similar activities. Some games or experiences are a little more exotic and include a ride on the back of a dinosaur or a house of horrors filled with hyperaggressive pumpkins. 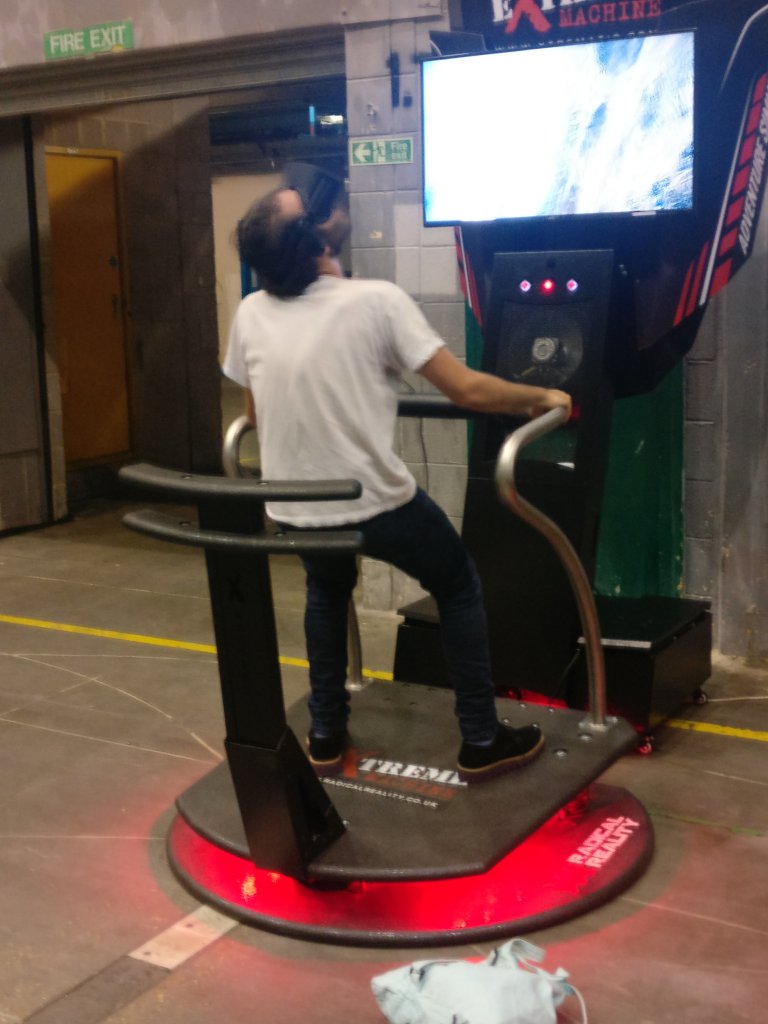 Some are pure experiences and non-interactive. Others allow the player to move on their own, or function as simple shoot ‘em ups. Overall about two dozen games are available, all of them designed to be short affairs of a couple of minutes.

I had the chance to ride the Extreme Machine at PLAY Expo London 2018. Being a fan of rollercoaster rides I started with Scream Coaster, the fastest and meanest ride available. The feeling is amazing. The platform adds a lot and translates a lack of solid ground under your feet.

The Extreme Machine cannot quite replicate the feeling of acceleration, but the vertigo is there. Slowly moving up to the highest point of the rollercoaster and knowing that the drop is inevitable feels just like it does in an actual rollercoaster.

I could only try out a handful games, but it cannot be overstated how much the platform movement adds to the games. I found myself clinging to the safety bar, even though I knew that I was just looking at a pair of fancy monitors.

Being rather bulky, the Extreme Machine is not made to occupy a spot in your living room. Instead, it is designed as an amusement machine for weddings, conferences and similar events. Is this the right choice for your teambuilding workshop? That is for you to decide, but what I can say is that the Extreme Machine delivers and leaves whatever else is available for home entertainment in the dust.

You can find out more about Radical Reality’s Extreme Machine on the company’s website.

Startenders sees you working at a strange, Alien bar