Puzzle Bobble VR takes the insanely addictive gameplay from the 2D arcade classic bubble popper, Bust-A-Move, and turns it into virtual reality. While the execution leaves some things to be desired, they certainly have captured the fun and feel of playing the original in a new way.

Another huge difference is the new launcher, which is a gear-laden machination that acts as a slingshot to fling bubbles out to the stack beyond. You load your bubble from the top, pull back on the handle, and send it off to its destination. It feels a bit like Angry Birds, but it works for doing the job. The problem lies in the aiming.

While aiming to shoot your bubble, there’s an indicator where it will land on the stack in front of you, and it flashes to show you combos that will clear those bubbles off the stack. What it also does is flicker or move from layer to layer depending on how far you have the launcher held back. This can lead to involuntary placement if you’re just the teensiest bit off. When every bubble counts because you’re trying to score three stars in a level, it can become frustrating. I often wished I could pull to zoom with both hands, as I feel it would alleviate this problem. 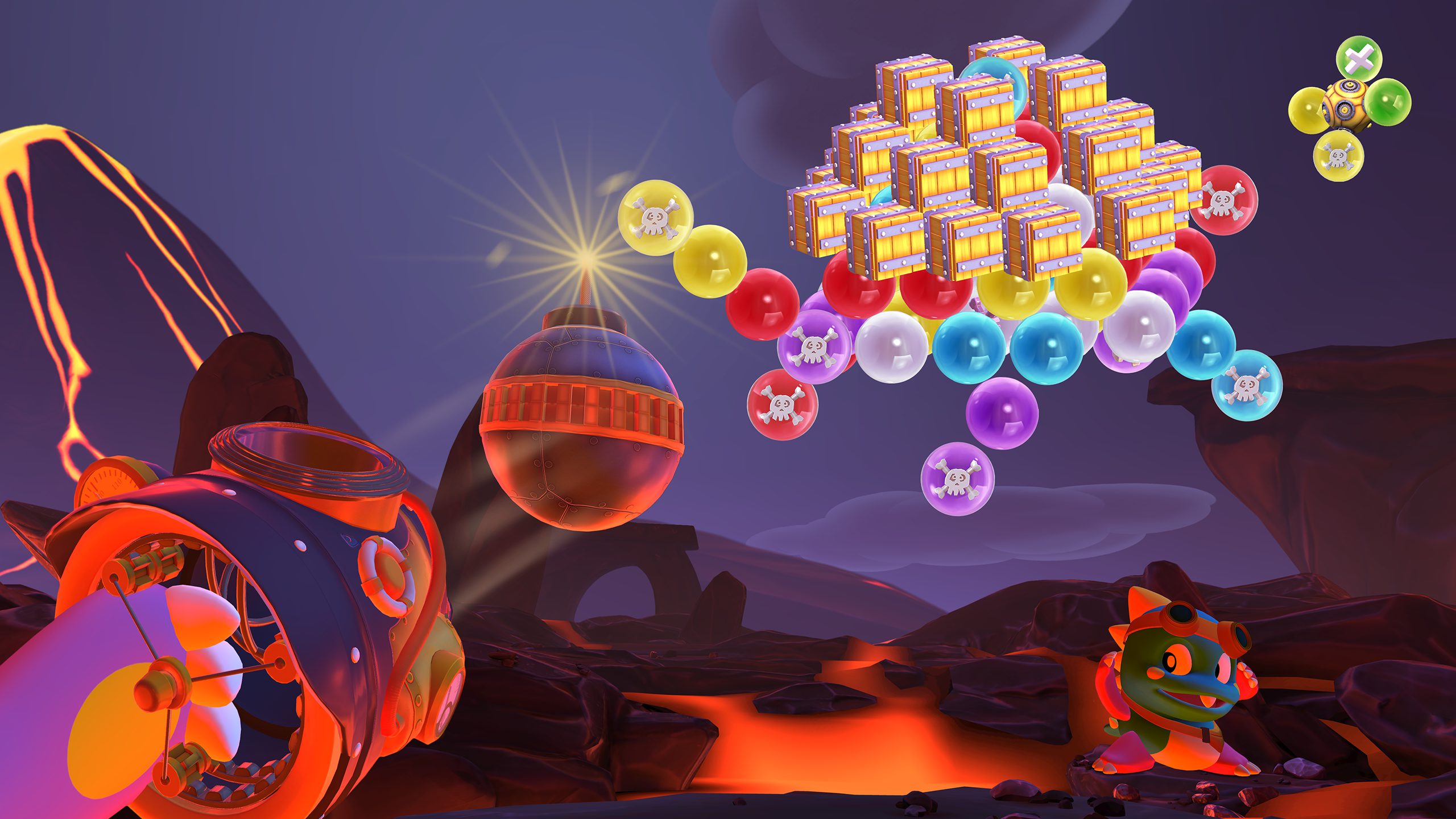 Power-ups ease the pain of fine-tuned aiming with an assortment of options to clear bubbles faster. You gain coins upon the completion of each level and can then turn around and use them to buy power-ups to use in a level. These power-ups range from blowing up multiple bubbles around your impact site, changing colors of the section you hit, or rotating the puzzle for easier access. When popping bubbles seems to turn the puzzle in random directions, it’s essential to have the best tools for the job, but more stars mean more coins, so it pays to get good.

You only need to receive one star to move on to the next level, but most players will prefer to work towards getting three stars on each puzzle. It’s that push for perfection that has always worked well in a game like Puzzle Bobble and it’s exceptionally addictive here, too. There are puzzles of various difficulties, but it seems like there are more easy puzzles than there are hard ones. This means that when you do finally get to a challenging puzzle, it may feel unfair or unusually difficult. Ramping the challenge up is always a good thing, but the spikes are often spaced out and sudden, which can feel a bit overwhelming when you’re used to popping with reckless abandon. It is supposed to be a vacation, after all. 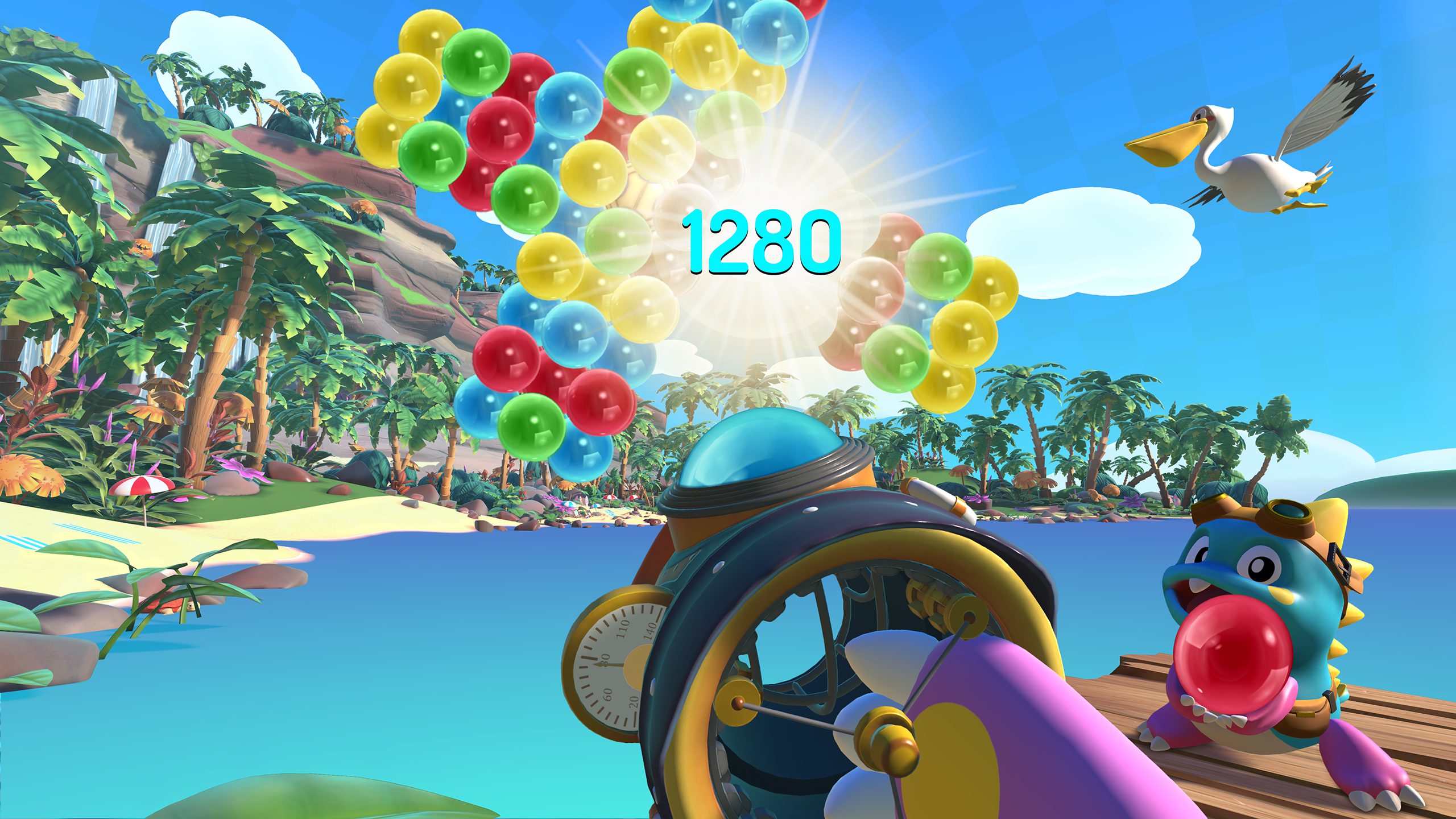 When it comes to visuals, Survios nailed the colorful world of Bub and Bob perfectly. Each puzzle is set in a gorgeously rendered location, with tons of eye-catching landscape details. From breathtaking ocean views to mysterious ruins, there’s something visually appealing to keep each level fresh when you’re not focusing on clearing bubbles. The soundtrack also keeps that classic sound going with some nods to the original tracks that made the classic game’s music so infectious.

Story mode in Puzzle Bobble VR is the main focus here, but there’s also an infinity mode that has you aiming to destroy cores before they get sucked into a black hole and a duel mode where you are facing against another player in a variant of the infinity mode. I spent most of my time in story mode, and while there are some issues with finding an opponent to face off against in duel mode, to be fair, it’s honestly not the primary focus of the game. 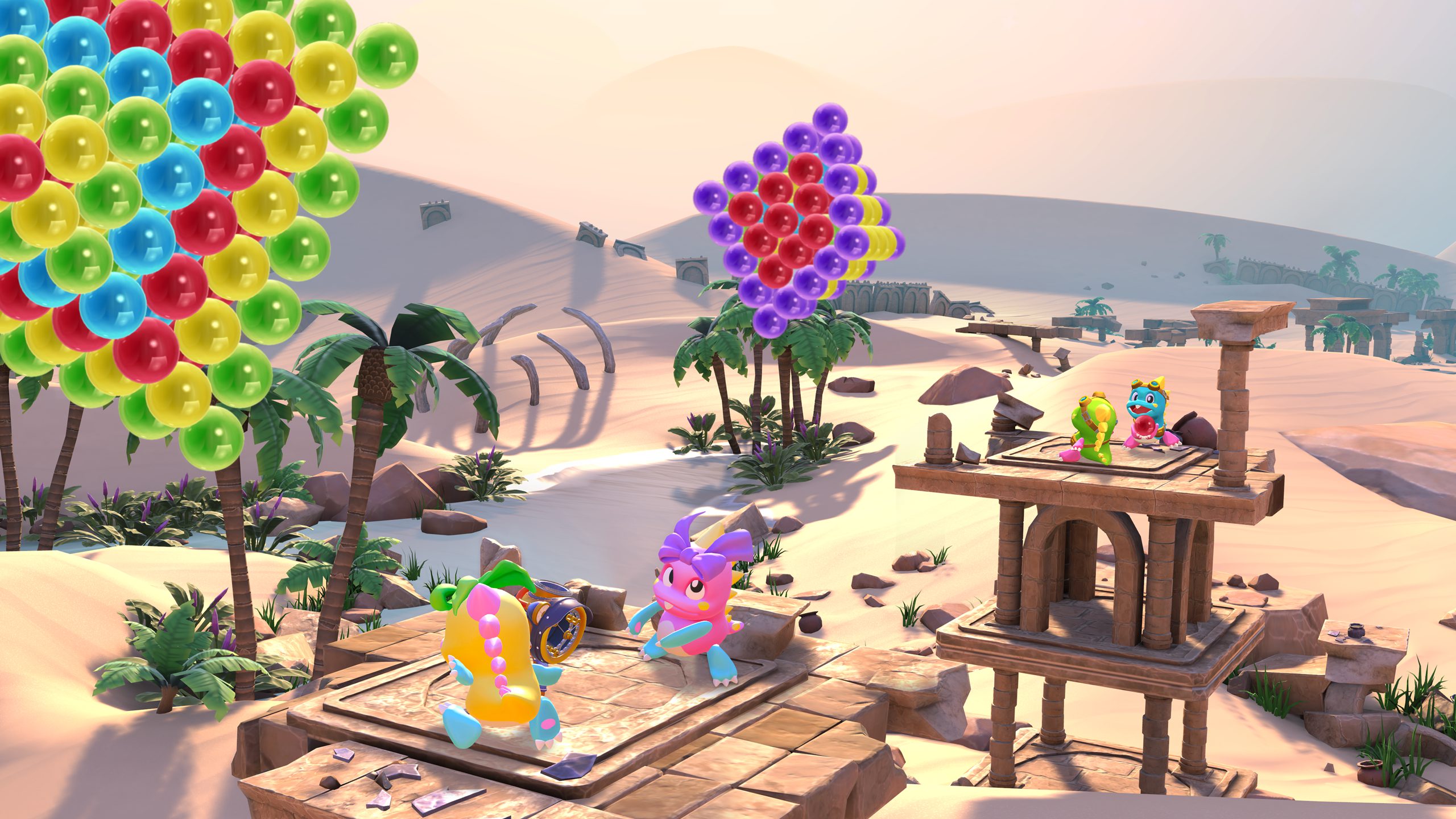 If you’re a fan of the original games, you’ll likely love experiencing a VR version of the quirky adventures of Bub and Bob as they pop their way through 100 new levels of puzzle-based arcade fun. If you’re not a fan or are unfamiliar with the franchise, there are better options to play the game than this jump to VR, as the original games still hold up quite well. The VR additions honestly don’t add too much to the experience, and with the controls being less than ideal, it’s hard to recommend to anyone other than nostalgic fans.