Tom Sennet (Deepak Fights Robots, Runman) has released a new title into the wild – this time a simple game where you fly around a room, collecting stars and power-ups in a rocketship, all whilst dodging monsters. It’s a simple premise, and a simple game. That said, it’s the visual design that really make the game stand out.  A gaudy, hubbub of bright and abstract colours flash around in the background with every star collected with the over-sized, throbbing messages and the scores left at a resting colour, out of synch with the world. It’s a wonderful mess that doesn’t really make sense, but… I think that’s the point.

There’s little to say on the gameplay further than that, Saturday-morning cartoon style metal follows you as you progress through the never-ending levels. You spawn in a room, filled with obstacles and monsters, and a quantity of stars float around, connected by lines. The stars are your goal, each one you collect shakes the world’s background from one abstract, scribbled form to another. If you collect all the stars then there’s a brief respite and then more enemies, and possibly some power-ups are dropped into the room. After clearing six lots of stars you ride off on a – or possibly the titular – beam to the next room. Repeat but with more enemies, more stars and more power-ups.

Oh, and each time a level refreshes, or you reach a new room, the game flings advice at you – some good, some bad, but all completely out of context and a little bit too large and bright to read in a game which is already doing a great job of being both those words. “FOLLOW THE NEWS” it yells at me, “CRUSH SOME SKULLS”, “PHILOSOPHIZE IF YOU WANT.” 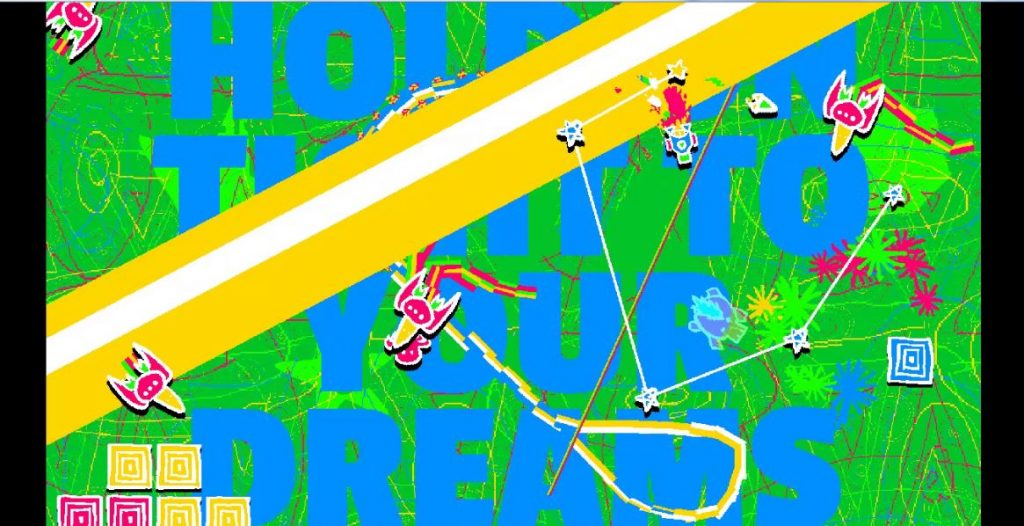 I won’t pretend that Ultralight Beam is about those flashing messages – it’s probably not. It’s probably more so about perception, and lack of construct. Hell, it might not be, it could just be a commentary on the song it shares it’s name with – the song of the album. I searched for the song’s lyrics to confirm the game’s tagline “This is a RNG dream. This is everything!” as well a citation on the quantity of devils in the house, were direct referencing to the song. As I flicked down the page I read the comments, just like the album it was on people were there posting gifs, rating the song -five star- and on those same posts stating the song was genius, and in the same breath that they couldn’t wait to hear it.

It could just be a little game about dodging enemies in a bright, explosive world.

I think the main reason I kept playing it was because it reminded me of my growing up in the 90’s, where children’s television shows were nuts, I spent too much time playing old abandonware DOS games, that and it reminded me of the funky menu backgrounds of the ToeJam & Earl series, those strange holidayware-design patterns which juddered and shook to themselves.

Testing out my theory that it might in fact be related to the softer bones, and mental sprightliness of the younger generation I sat my eldest child down with the game for five minutes or so. When asked about the game he simply replied that he liked “The Stars, The Spacemen, and the Spirally Backgrounds,” and maybe it’s as simple as that. I’ll leave it there, before I get hung up on the not-so-hidden messages again.

There’s a free, web embedded version available through several portals, alternatively you can pick it up for $3 over on the [itch.io page].