Preview | Earthfall (Story of a Nomad)

Earthfall, on the surface, may look like another crafting, survival game; and it is. There seems to be a recent desire for them to be launching almost every few weeks. However, this game seems to have a certain charm, it seems to make itself stand out, so I had a look at it.

The version of the game that I am writing about is the V0.0041a Early Access Candidate. All those numbers and words basically says to me that the game is going to be minuscule with a massive lack of features. Interestingly enough though, it’s loaded with content. This is mostly because Danny Goodayle – of “Just A Pixel” – back in February of 2016 decided to do a 30 day development jam. This involved adding as many features as he could, adding enough, but not so much that it impacted the quality of the gameplay.

In it’s state, there is only an online option to play the game, and there doesn’t seem to be anyone else playing the game for the past several times I’ve been playing it and searching for another server, so trying to join a game seems to currently be a pointless feat, so instead you’ll have to host a game. Simple process, just click host, fiddle, wait for the world to load. 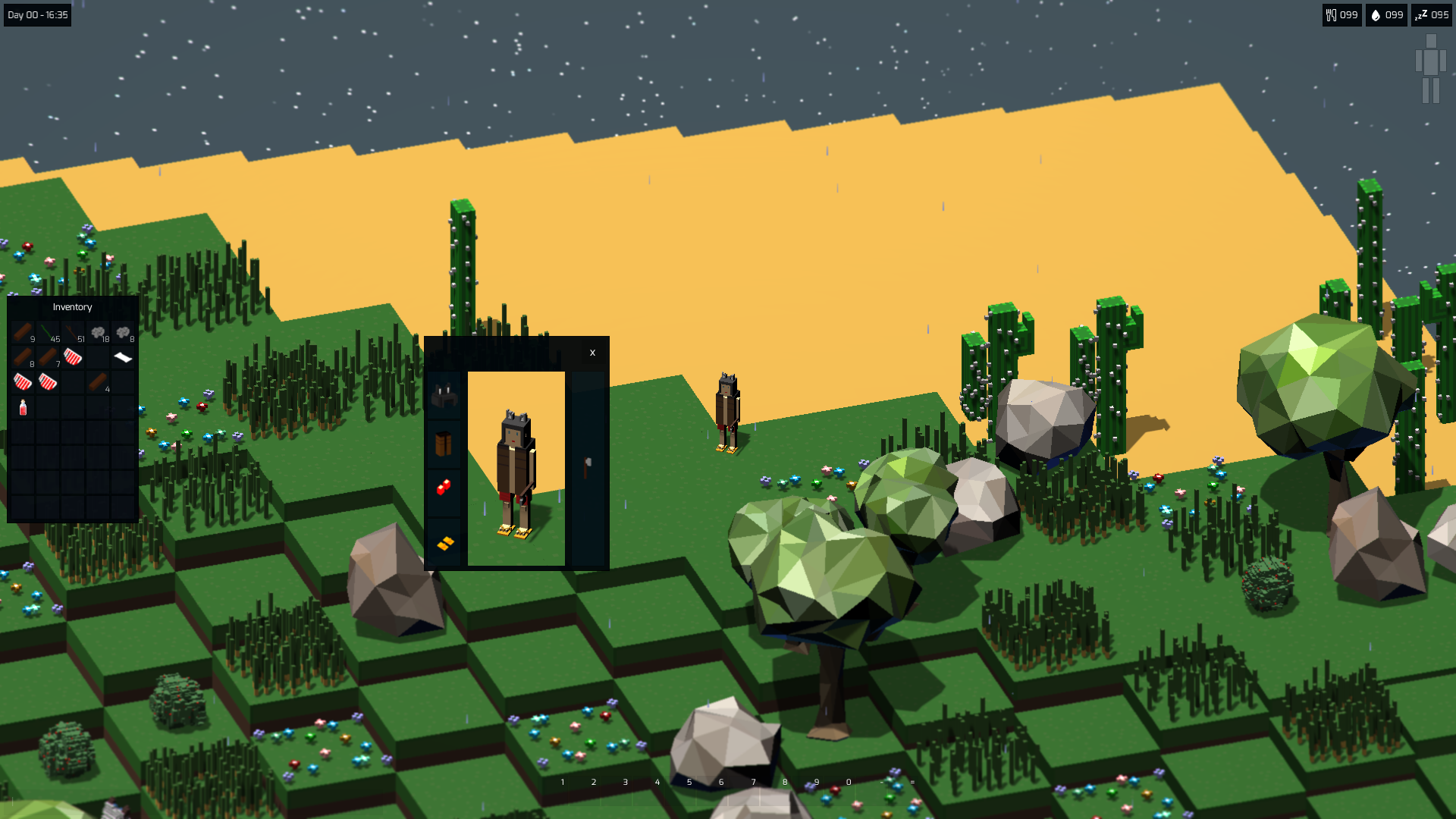 This is where you become introduced to the world, and the graphics. After a brief character creation you appear in your world. Standing alone surrounded by vegetation, you begin your adventure and quest to survive.

The first interesting thing that I noticed is the camera. It starts as a top-down view, slightly diagonally facing your character, you can control this camera by zooming in or out, and also lower or higher. The world around you are blocks, but not blocks that you’d expect to see in Minecraft. No, These are very different type of blocks. Firstly, they’re big blocks in comparison to your character, secondly depending on your characters visibility – depending on the weather – only a certain amount of blocks will show up. Good visibility means a lot of blocks can be seen filling your screen. Bad visibility will result in only a few blocks surrounding your character. This is mostly at night or in a fog. The areas there aren’t any blocks is just empty space. 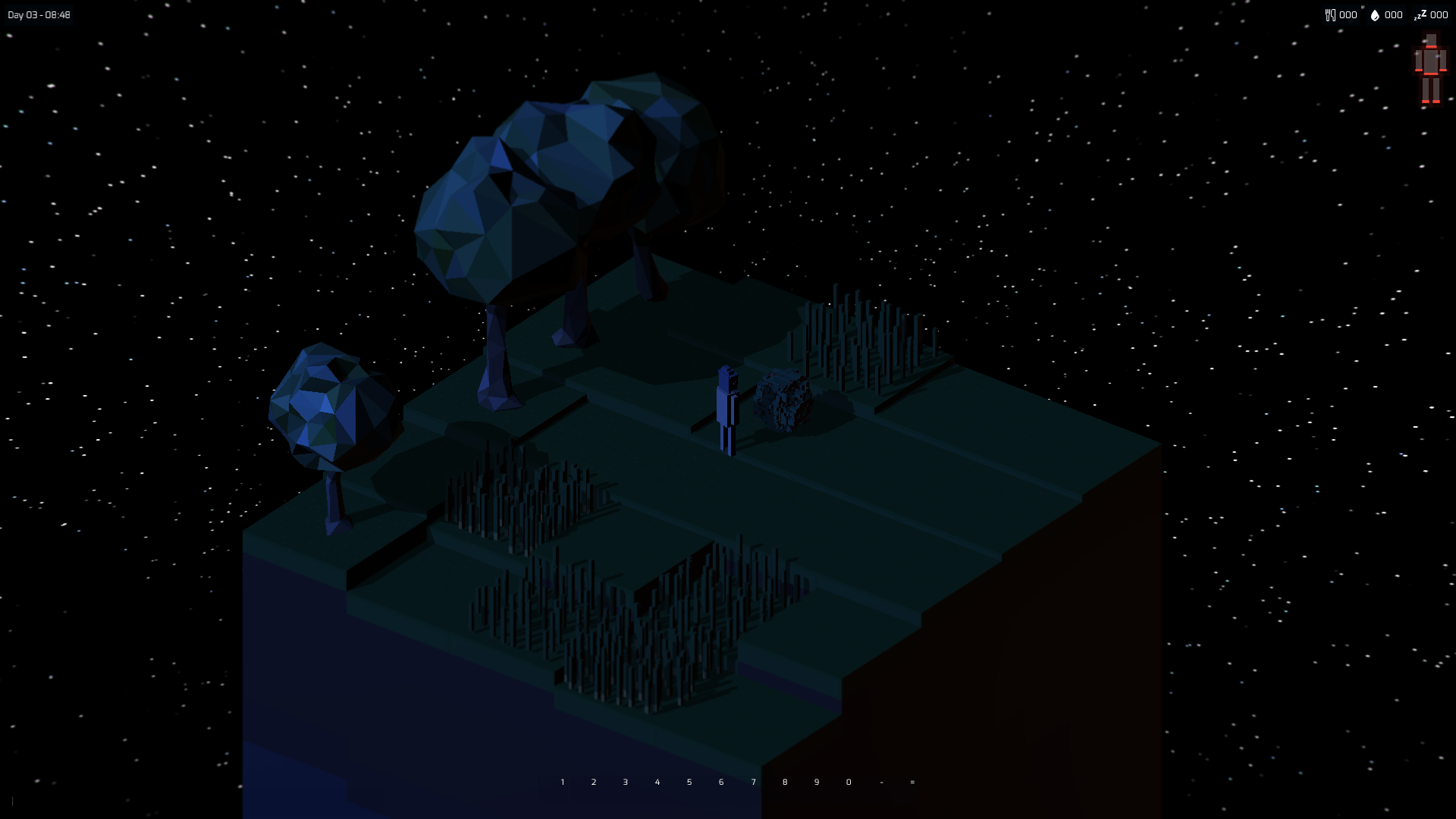 There appears to be a really nice weather dynamic within the game. It’s nicely random, but a nice sensible amount of intervals that doesn’t make the system seem too scripted and makes it feel like actual seasons are passing. Time can also be sped up by tapping X, tapping it again will return time to normality, however as you’d expect, the more time passes, the more your character suffers from the elements and hunger, etc. 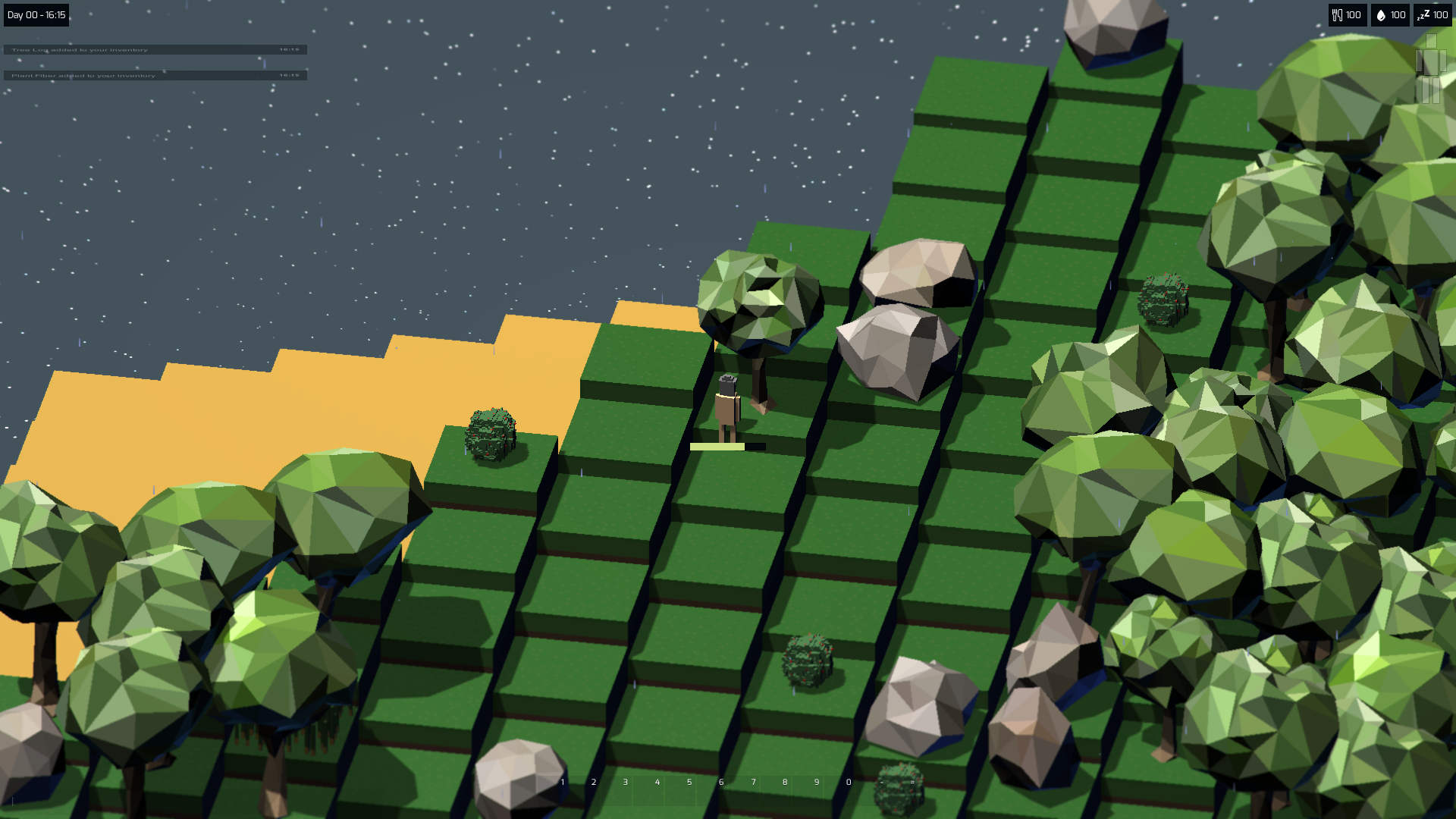 The UI is actually very minimal, yet desirable. Rather than have a huge interface pop up and distract you from the games world, you get little boxes that can be moved around the screen and placed wherever you wish. The font may be a touch small, but the boxes are a nice black, which stands out nicely from the games world with it’s dark on light contrast.

Admittedly, the controls aren’t amazing at the moment, with a mouse and keyboard, it plays rather annoyingly. WASD essentially strafes in every direction because the mouse controls the way your character faces, this can become particular difficult when rushing away from an enemy. There is also no jumping, crouching, or prone options, so you’re just a body with flappy limbs wondering naked around a world until you gather clothes that suit your non-flexible body parts.

The gathering tends to be similar to most crafting games, in the fact that you basically just click and destroy an object, then you gather whatever falls from it. For Earthfall though, you automatically gather resources from natural objects, and you have to manually gather from fallen enemies, chests, etc. You bring up a menu of items that are both available to craft by pressing the R key, and you’ll know if you can’t craft them because you’ll see a red overlay over the object. Don’t worry though, there’s a lot of resources to gather from, the world is immensely populated with trees, rocks, and far more.

Sound wise, the games seems to only contain sound effects, such as a “pop” sound once gathering a resource has completed, other than that it seems like quite a nice quiet game. Even when you die, and it’s fairly easy to die from battle…let’s just put it that way.

Earthfall has undergone almost daily updates, so the version I’ve been playing is quite out of date. The newer version has now been re-named to “Story of a Nomad” – and the developer, Danny Goodayle, can be found every Thursday on Twitch developing the game live. If you grabbed the game at an earlier stage, then you won’t have to pay for any future updates, however, the more updates applied, the higher the price becomes. I’ll be looking forward to bringing a more up-to-date version on this version. But from the build I’ve played so far, it’s going to be a game full of heart, dedication, and fun times ahead.