The subtitle is certainly true. This is utter madness.

I like pool. It’s one of the few sports I enjoy watching and playing, both in real life and in the digital realm. From Archer Maclean’s Pool to more recent efforts, such as Virtual Pool 4 and Hustle Kings, I have played them all. But nothing could have prepared me for this.

The standard elements are there — cues, balls, pockets (holes) — but that is where the similarities end. Pool Panic puts you in control of a sentient cue ball, in a world populated by other pool balls. The standard game loop involves you hitting the balls into the pockets, or other holes, then potting the 8 ball. After this, you follow the black ball down yourself and you finish the level. It’s a simple premise, but the amount of variety and creativity the development team show here is, quite frankly, way ahead of anything I have experienced before. 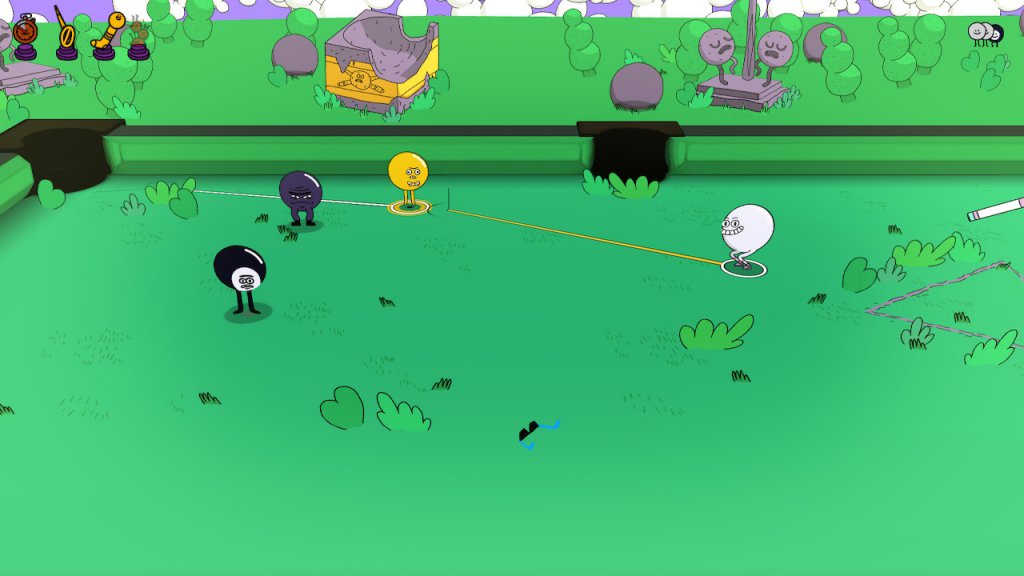 Controls are a relatively simple affair, with the left stick moving your cue ball around (you have legs, until hit by the cue) and the right stick bringing up a typical pool-like reticule (with guidance line) and a cue hovering behind your cue ball’s head. Pressing the right trigger at this point pulls off a powerful shot, with the right bumper doing a less powerful shot. You’re shown these techniques through the first few levels, which are practically the only levels where you play on an actual pool table (except for the trick-shot levels, but more on those later).

You traverse an overworld, following paths and looking for levels in a world somewhat reminiscent of Super Mario World. Differing biomes, towns, a fairground, a trash dump… you name it, it’s here and represented in ball form, with varying rule changes and a variety of ball types. I feel as if if I tell you about these, you would miss out on a lot of the experience, as a lot of the gameplay revolved around working out what exactly to do on each of the levels and discovering how the different balls react. Remember, we are talking about sentient pool balls here — some are even animals and react kind of how you would expect. 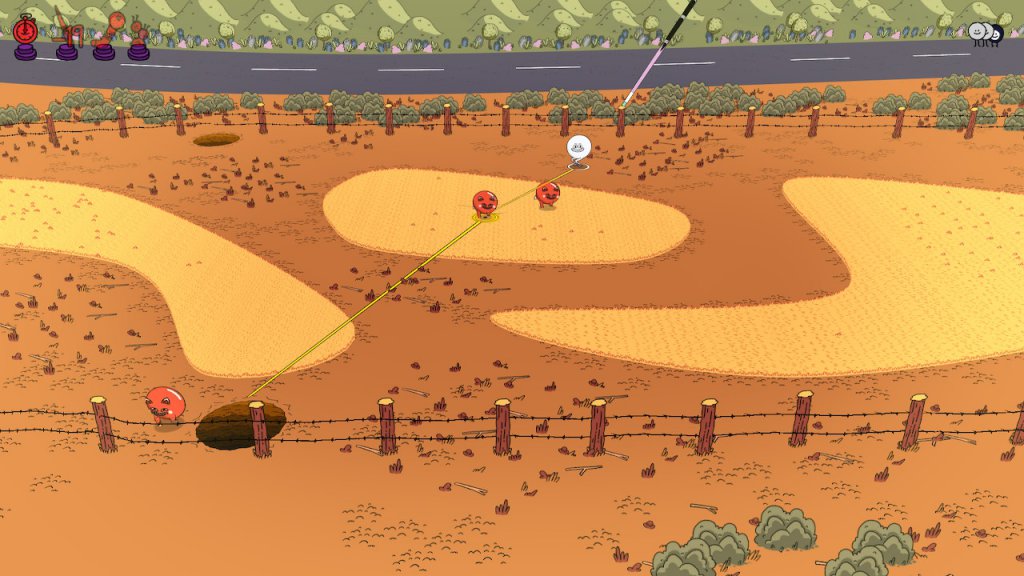 One thing I will mention is the fact that other sports are represented here, too, but with a pool twist. Mini-golf, air hockey, football and climbing all get the pool treatment and are all fun to play, just like the rest of the game.

To be honest, Pool Panic is much more of a puzzler than I initially expected it to be, but I was pleasantly surprised. It’s not without its frustrations, but that was more due to my own ineptitude at not being able to aim quick enough, or I was just missing something very obvious. I was never stuck for a long period of time, but some levels were frustrating for a few minutes, as you have to think a bit out of the box. Go back to certain levels a second time and you do a lot better.

If you want to get the most out of this game, or are a 100% kind of person, you will find yourself going back multiple times. This is because you are graded on four elements of your play on every level. These are: time, shots, number of balls ’potted’ (in quotes, as just getting the balls off the play area in any fashion possible is often the case) and deaths (potting yourself). 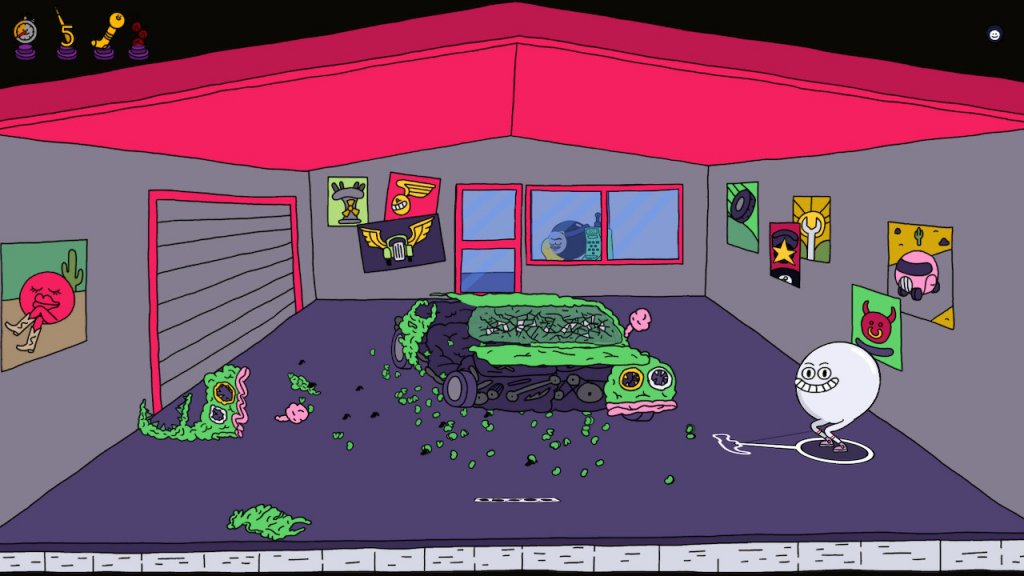 Each level has a specific Par time and Par number of shots, along with a count of how many balls are on the playfield. These are sometimes not immediately obvious, or shown, as some levels have multiple parts where balls may be hidden until you perform some other task. These tasks are also sometimes mutually exclusive, requiring multiple visits to pass each of the four challenges. For example, some levels do not require you to pot of the balls before pocketing the black, but one of the challenges would be to pot all of the balls. On certain later stages, passing this challenge and the time challenge at the same time would simply not be possible.

As you finish more and more levels, the world opens up. Pool Panic is not strictly linear, with you almost always having a choice of quite a number of levels to do next, but parts of the world are locked off until you find some secret on the map to open the next part. Sometimes this can be saving a particular ball from a level and taking it to a specific point on the map, or simply triggering a part of the map. Secret levels are also hidden around the world map, and these are opened in a similar way. In certain levels, there will be a brown, stubby ball that has a cuetip as a hat. Pot this ball, and he follows you on the overworld, activating any secret level you happen to walk by: one per guy you rescued. 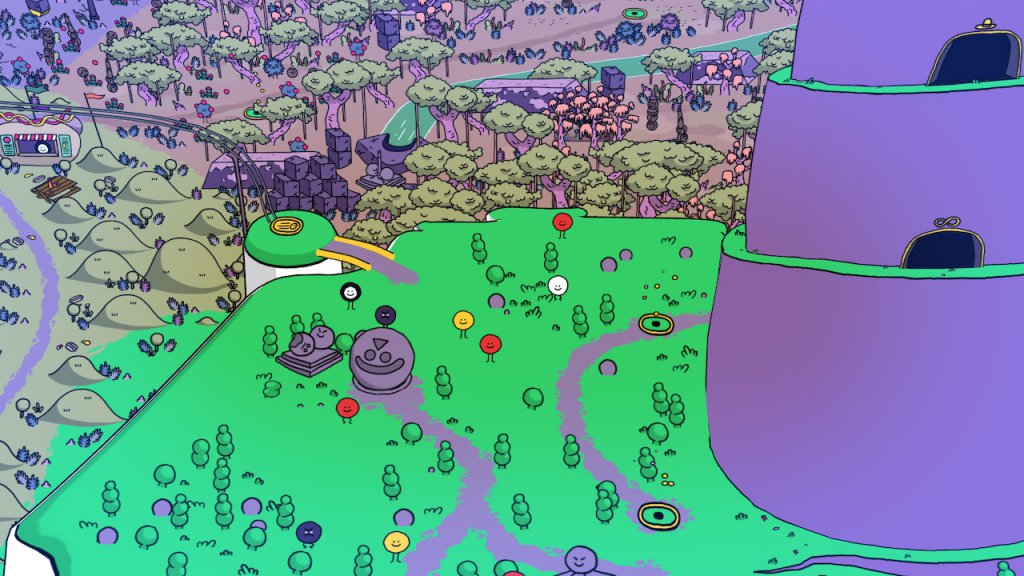 Other doodads strewn about the worlds are the Chalk Pubs, which contain a few trick-shot challenge levels. Talk to a patron at the bar and they challenge you to a trick shot in which you are, usually, not allowed to move the cue ball, and have to hit a specific number of balls in with just one shot. Some of these are fiendishly hard, and will take a bit of brute force to get — I still have one of these to do on my game and for the life of me, I cannot get it. It’s fun, though, even if the cue balls’ laughs get annoying after your fiftieth attempt. You can also find seaside-style photo dioramas for you to put your face in and get a picture taken. This has no effect on the game, other than getting you closer to that 100%

As you wander, finishing levels and opening passageways, occasionally you can hit a sort of checkpoint, which sends your ‘levels cleared’ number to a central tower on the map. The more levels you do, the higher the tower grows and more extras you unlock, eventually growing and opening a final level at the top of the tower, where you meet the final boss (yes, there are bosses in Pool Panic but really, you need to experience it, so no spoilers). On this tower, you unlock Panic mode, which is a kinda randomly generated, endless run of balls with a timer. Each ball pocketed gives you more time to pocket the next, and you play to see how many tables’ worth of balls you can make it though. 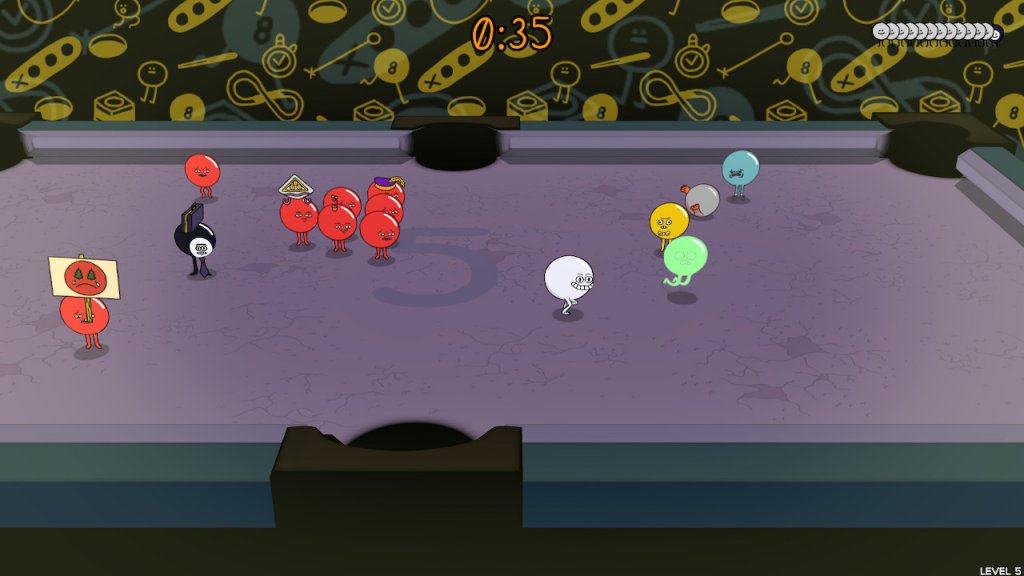 The rest of the tower is pretty much achievements. One level shows of a bunch of challenges you can earn. These do not trigger in-game to say when you have done them, but the tower does give you clues, so you can work through them once you have access. Another level contains the pictures you have taken in the dioramas and one, which I quickly looked at, but retreated from, seemed to be an entire ‘Dark World’ version of the world map, which involves harder challenges.

The art style is a strange, but fun one. Even though Pool Panic takes place in a 3D world, with depth, everything is 2D, even the balls. It’s a tad strange at first, but you get used to it fairly quickly and the balls do react to each other as if they had true 3D depth. It has a very Cartoon Network kind of feel about the art style — certainly not out of place for something put out by Adult Swim. 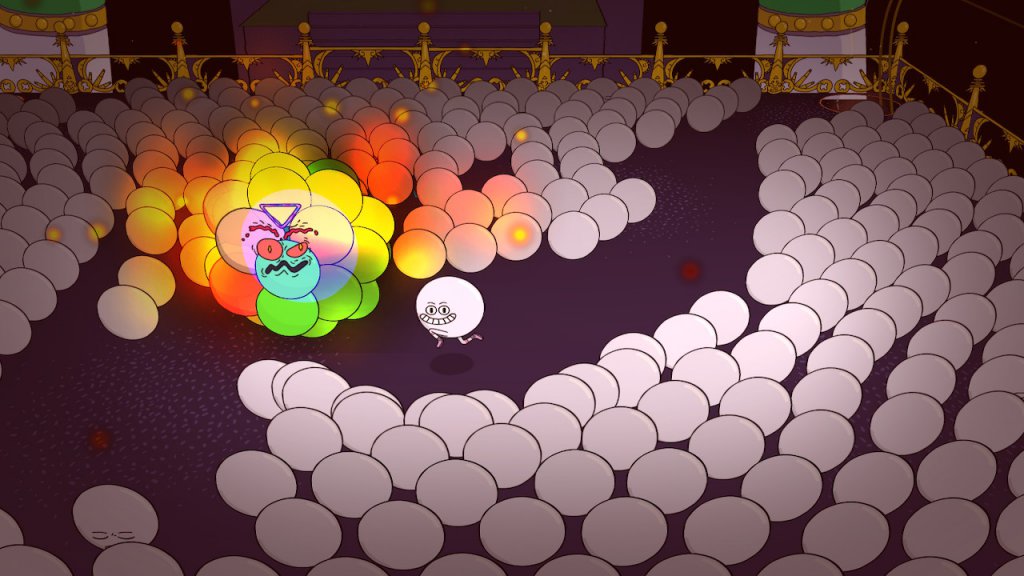 In conclusion, if you like good, dynamic puzzle games — and possibly a bit of pool — do check out Pool Panic; it’s an absolutely fantastic game and will give you hours of fun, especially if you want to go for that 100%.

Pool Panic is available now on PC and Nintendo Switch.