In Early Access over on the Epic Games launcher, Pinball FX is Zen Studios’ latest release. With it they’ve tried to change up and enhance the way that people collect tables, but it comes at a strange time and in a strange way.

Zen Studios have been the most visible face of video game pinball machines for over a decade, their (Xbox exclusive) Pinball FX in 2007 did so well that they spun up a new pinball IP (Zen Pinball) to release their formula onto other consoles and platforms. The Pinball FX and Zen series remained split across different systems until almost a decade later when a VR version made it to PSVR and then, in 2017, Pinball FX 3 was released on all current-gen home systems and PC. Later, and very notably, Zen picked up the Williams license and brought those, and a mass of new features, into Pinball FX 3. This was a turning point, and I know competitive pinball players who got into the hobby through enjoying those Williams tables and seeking them out in real life.

But, but, but. With the transfer from the first generation of their games to the second, Zen allowed users to import their purchases (at the time, simply fictional tables). They even allowed users who moved console generation (PS3-4, Xbox 360-One) to upgrade and import their second-generation tables to their ‘new-gen’ version of the game.  However, there was no such upgrade for second generation into Pinball FX 3, and — as of yet — there’s no news of the same into Pinball FX (2021). This has caused a little bit of a push-back from some of the community… which left me quite curious about it, and so I’ve dived in and spent some time with the new game.

Pinball FX is all about collecting. It’s taken the experience back from shifting from table to table to having a ‘Game Room’ complete with generous shelving options. It’s an interesting idea for certain, although I have to admit that the idea of a big open room (with a beige beanbag, bar table & stools, wall-embedded vending machines and more) with a single table about a foot away from a circular rug looks nothing like anywhere I’ve ever been with a pinball table. It actually becomes more uncanny the more you think about it; most pinball tables are in dimly-lit arcades or converted warehouses or office buildings; or somebody’s garage, side room or shed. Still, the warmly lit room is interesting, and it gives a good scale to the table AND the decoration elements of Pinball FX are fun.

That said, at the moment the table contents don’t actually load when you’re viewing the room. Meaning that no matter how many cool statues and models you have set up around the room, you can’t glimpse a sneaky peek inside the table; It’s simply a grey frame at the moment. This is incredibly stark and obviously, a case of ‘feature isn’t there, yet’ so it’s clearly something on the way and in development. 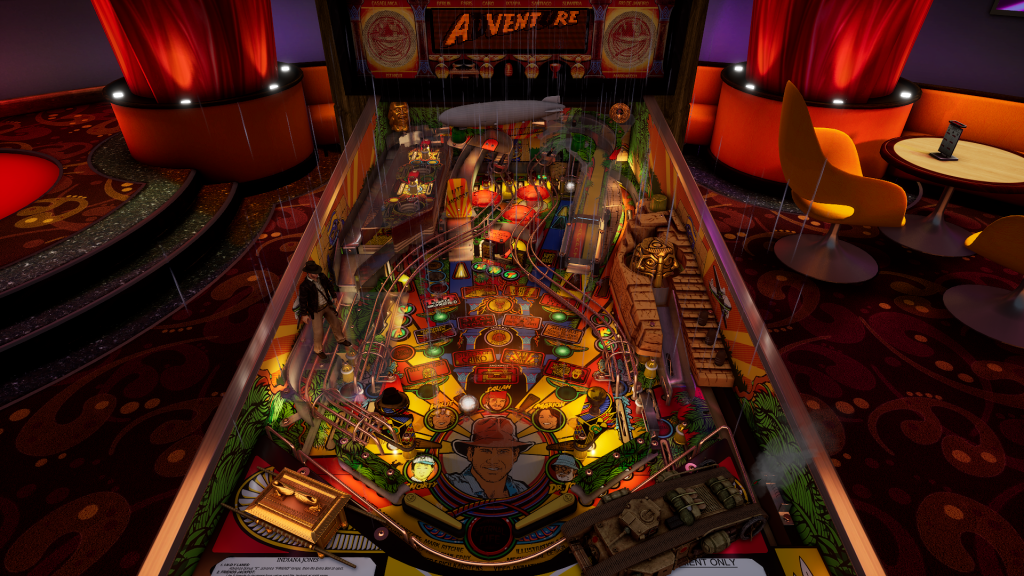 The new changes that have come in with Pinball FX are more than just cosmetic though. The menus have been completely redesigned to wrap around the edges of the screen. Pinball FX 3 was all about big menu buttons and lumpy leaderboards, all with a very stark ocean-blue theme. This, however, opts for clean, easy-reading menus that mostly operate on the left side of the screen, with the backdrop being various views of the main pinball room. The shop is, perhaps understandably, the main exception besides table selection. Each of the sub-stores — Special Offers, Tickets and Tables — overlay the whole screen so that you can see what you’re potentially buying.

It’s the store that seems to have caused a lot of the confusion surrounding the new iteration. There are a couple of different currency options available here, and they kind of work against each other. Firstly, new to the series is the Pinball Pass. Pinball Pass grants you most of the Pinball FX tables, unlocks all of the game modes, unlocks all of the collectables and gives you extra Pinball Royale rewards (like a premium pass, a la Apex Legends, Clash of Clans, etc). This is available in monthly and annual subscriptions.

If you don’t subscribe then you can still experience Pinball Royale (once it’s in) and aside from buying tables (which is done with a new currency, tickets) you can also play the free daily tables, which rotate through. 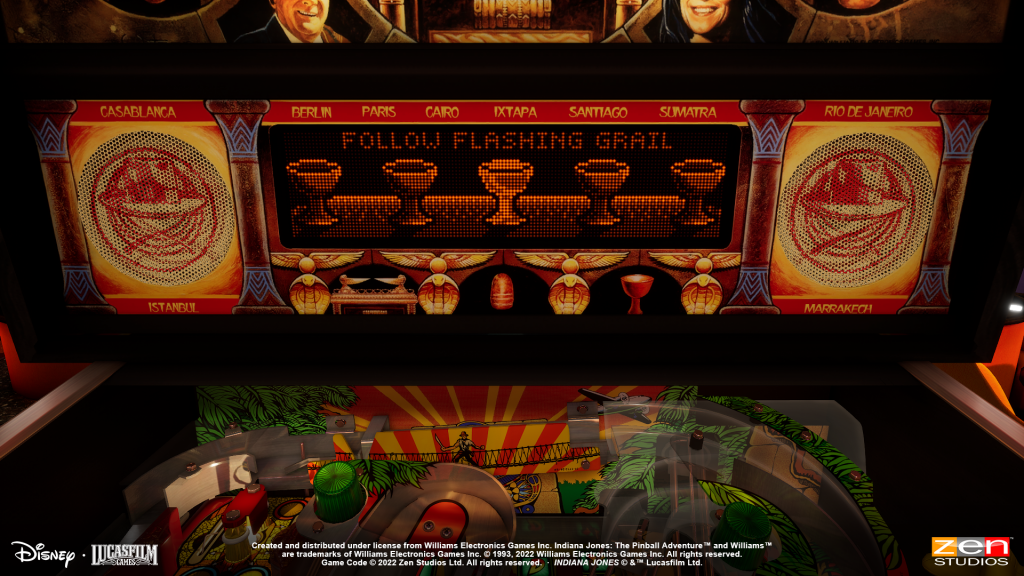 Pinball Royale is an exciting idea, but it’s not actually available in the game yet. When it was first announced last year there was a very light outline given for it. It sounds as though multiple players will compete on the table with varying ways of affecting each other. But, we do have an actual indication of what that might look like thanks to Zen’s own Apple Arcade Pinball Party, which includes a Funko Pop themed table called ‘Funko Pinball Party Arena’. In that four players each play on a small playfield, gaining points as they play but also racking up numbers which translates into attacks on other players. These attacks take the form of distractions on the field, obstacles or modifiers to their pinball. You can’t see what the other players are up to, but you can see their score, which is important because people are eliminated every so often. Pinball Royale could take notes from this, which certainly sounds interesting, especially if the wackiness is toned down and the player count is increased.

As a restart to the entire series Pinball FX is a really interesting proposition, it’s also launching beyond the Epic Store this year, with it planned for most home consoles before the year is out. There are lots of different types of pinball players in the FX community, and it’s certainly hard to balance those who are simply looking to launch a few balls with those who own tables and enjoy learning their very core. It’s certainly hard to appease those latter players, who can open up their own tables and tweak sensitivity, customise modes and turn off the tilt, but Pinball FX further cements Zen’s position as masters of approachable Pinball simulation, and hopefully, they’ll keep adding more licences as time goes on.

Pinball FX is available now on Windows PC, free via the Epic Games Store. It’ll launch on Nintendo Switch, PS4/5, Xbox One & Xbox One Series S/X before the year is out.