PATHWAYS/012: KING OF DRAGON PASS — The Other Side of the Coin

King of Dragon Pass turns the traditional Tabletop RPG format on its head as a clever strategy simulation which sees you leading a faction of inwards-facing Norse Nomads.

Back when Lou started off the Pathways series I felt that there were three ways in which the series could head. The first, and definitely the path which it has mostly gone down so far, is that it would follow immersive sims; that it would tell stories of narrow escapes and clever ambushes. The second would be for it to follow building, colony management, and strategy games; telling stories of bad city design turned lucky and of cities burned to the ground by absent-minded dimwits. The third is where I’m taking it today, down the path of choose-your-own-adventure games, of games where decisions are pre-written but conclusions and pathways are hidden until they reappear later.

King of Dragon Pass is an important game to me. I can’t quite remember when I found it, but I wound up with it on my phone at some point, and when I played it, I felt as though I was reconnecting with a lost friend — I’m still unsure to this day whether I had played it on PC while younger.

The game is a strategy simulation game, somewhere between a modern colony management title and choose your own adventure game. Taking place within Chaosium’s Glorantha setting (also used in HeroQuest and RuneQuest) King of Dragon Pass focuses on the Norse-like followers of the Storm God, the Orlanthi. While playing as a tribal faction might not seem particularly new or unique, the world is still walked by the gods, and the world’s strange series of religions (from simple goblin worship, to ancestral, to full deity hierarchies) are all heavily interlaced with the game’s events. So much so that every single muttered superstition and town-elder’s worry carries weight.

In a world where Scorpion-centuars, plantmen, humanoid-dragons, and duck-people are among the other races which walk the Dragon Pass, there’s a lot to consider when it comes to allocating where you focus your worship, or even where you allocate your Carls. Actions and choices often return seasons, or even years, later: didn’t accept the help of those religious zealots two summers back? Now you have chaos creatures burning your steads and stealing your livestock.

It isn’t all of this which makes the game stick out most for me though. It’s the fact that within this crazy, myth heavy world, you are simply playing a character on a tribal leadership ring.

In most settings you normally play as the most advanced creature or being in the world. You normally lean on your knowledge as a person, on lessons you have learned from modern society, as to predict the patterns of the game world. In King of Dragon Pass you have to disregard this information; you are not the most advanced, you must act like a tribal leader, one following the rules you denote that your clan followed from their birth. You need to grow, certainly, but not to swell to consume the map like in most games — instead making allies, sating rivals, and creating a greater group which can survive the dangers of The Pass itself.

Glorantha is the perfect place for heroes. It’s a setting which allows people to play as DUCK PEOPLE, and LIZARD PEOPLE, but here you are playing an Orlanthi tribal leader. This leads to my favourite story thread in the game, a single event where a bunch of adventurers show up and ask for hospitality. It’s interesting to play the ‘strange locals’ in this situation, with the tables flipped from that classic Pen & Paper RPG trope of staying with locals who simply don’t understand your place in the world.

Here’s the body text from the event: 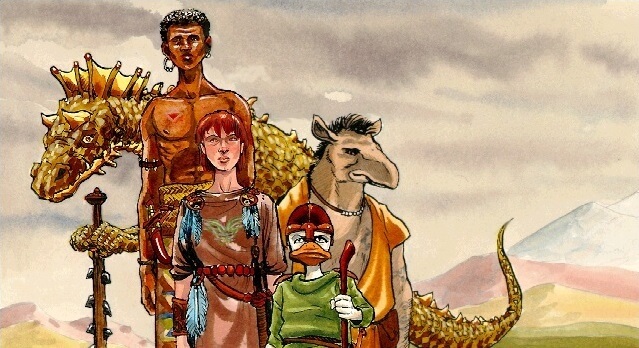 “A very strange group of explorers comes to your tula.  They’re looking for something called an inn, and want to know if you can change the gold coins of the northern empire into silver ones.  They seem also to be requesting your hospitality for the night.  Along with a strangely-attired Vingan warrior, there’s a duck, a dragonewt, and two very strange beings – a tall human with skin darker than you’ve ever seen on any man before and an inhuman beastman the likes of which you’ve never laid eyes on.

These are all options which I have had attempted against my party in RPGs I have played, and it really gives you pause for thought when you consider that each of the NPCs in those stories may simply not understand what an Inn is, and may not understand those things you do and why. What utterly exceptional writing.

Perhaps most interesting of all is that if you do succeed in killing them you gain four treasures. Naturally adventurers collect treasures, and any band of them quickly moves away from standard weapons within a dozen sessions. To your clan though, these little pieces of equipment are almost sacred, giving abilities and tweaks to the tula; each one can be traded for dozens of cattle, or sacrificed up to the gods for massive boons.

In making players put themselves into the shoes of their clan, and in having us discard our conventional knowledge and modern ways, King of Dragon Pass remains unmatched even to this day.

King of Dragon Pass is available now on Android and iOS. It’s also available on PC & Mac via GOG, Steam, or Humble Bundle.