Parkasaurus — What even are dinosaurs?

I know shockingly little about dinosaurs. If you asked me about them, I could tell you there are a bunch of different types, some eat meat and some eat vegetables, and… that they roamed Earth a long time ago.

While most people learned about dinosaurs in school, I grew up in a very small town where your parents could opt you out of learning about dinosaurs due to religion. Being raised heavily Catholic, my parents didn’t believe in dinosaurs — so, I didn’t either. I had been told my entire life that they weren’t real, never existed, and were just a thing some people believed in much like ghosts. Was there proof? Sort of, but not really. Do some people believe in it? Yes, but others don’t.

Like most of the things I wasn’t allowed to learn about, I haven’t seen dinosaur movies (Jurassic Park or kid’s cartoons) and I subsequently haven’t played that many video games with dinosaurs in. I brought home a dinosaur stuffed animal I won at a fair as a 19 year old, and my dad told me he was disappointed in me. 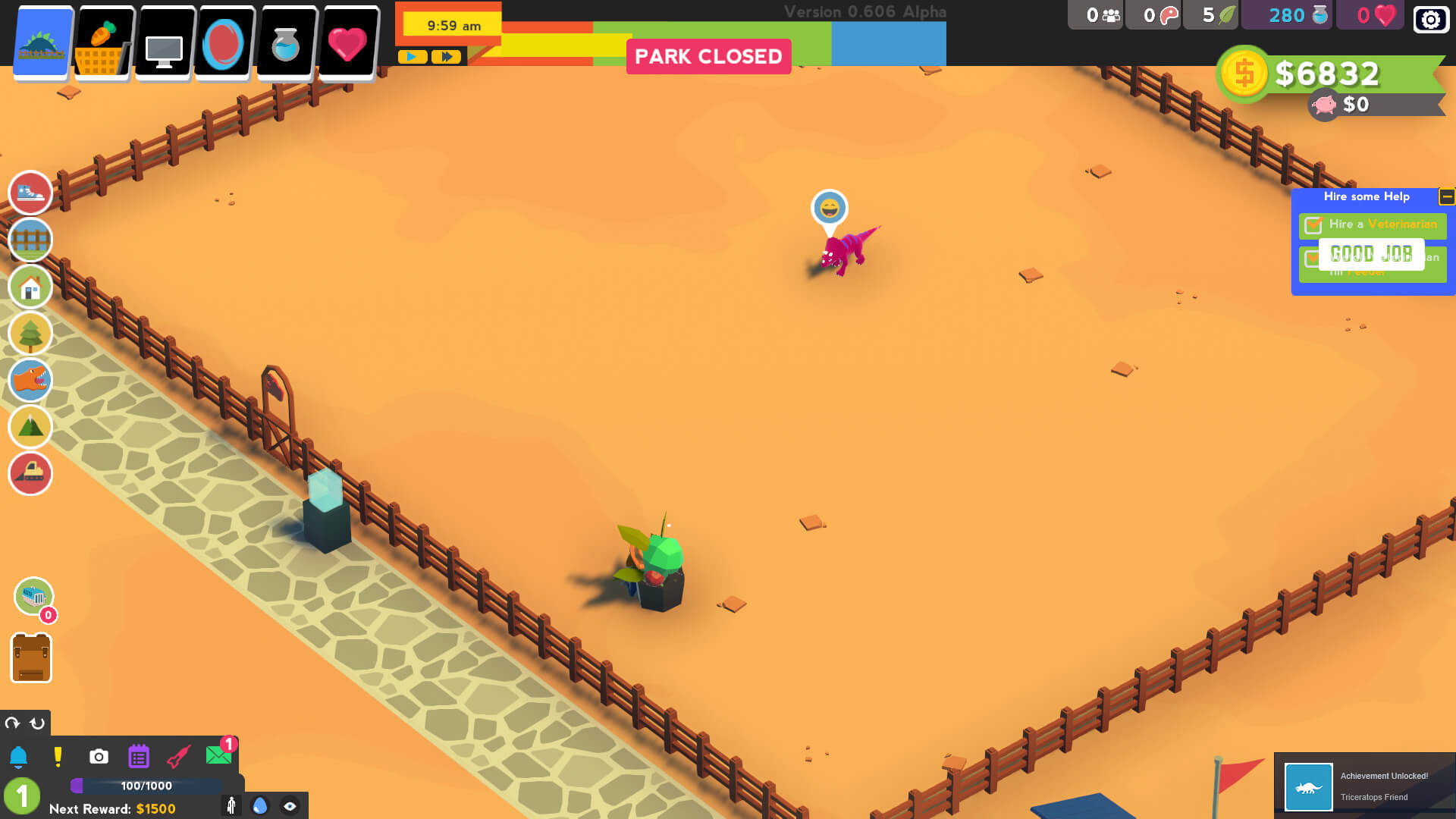 I then came to England and SAW DINOSAUR BONES IN A MUSEUM. You see, I had been told my entire life that there wasn’t bones on Earth that you could just see. I was told, much like ghosts, there were speculation. As it turns out, dinosaurs are real things… or were real things? Who knows. But, when Parkasaurus came out, I needed to have a go at running my own dino-land.

It seems like, for whatever reason, people want to look at these colorful creatures. One of my dinosaur plushies is grey – the other is light green – and honestly I have no idea what color dinosaurs are meant to be. These ones look pretty dang cute though.

In Parkasaurus, you get to raise your own dinosaurs; from their eggs, static in place, to fully grown, rolling around in the grass. Dinosaurs, much like most pets, have their own requirements. You need to make various cages for them, giving them the right type of biome to live in. Biomes are very interesting in this game; you basically have a starting biome, that can then be altered by the addition of water, to become a different biome. You will also need to have appropriate rocks, bushes, and trees to add to biome diversity. I really didn’t think dinosaurs cared this much about stuff! Dinosaurs also don’t like being seen by humans all the time — so you might need to put in concrete walls and larger grass areas, so that they can hide away. 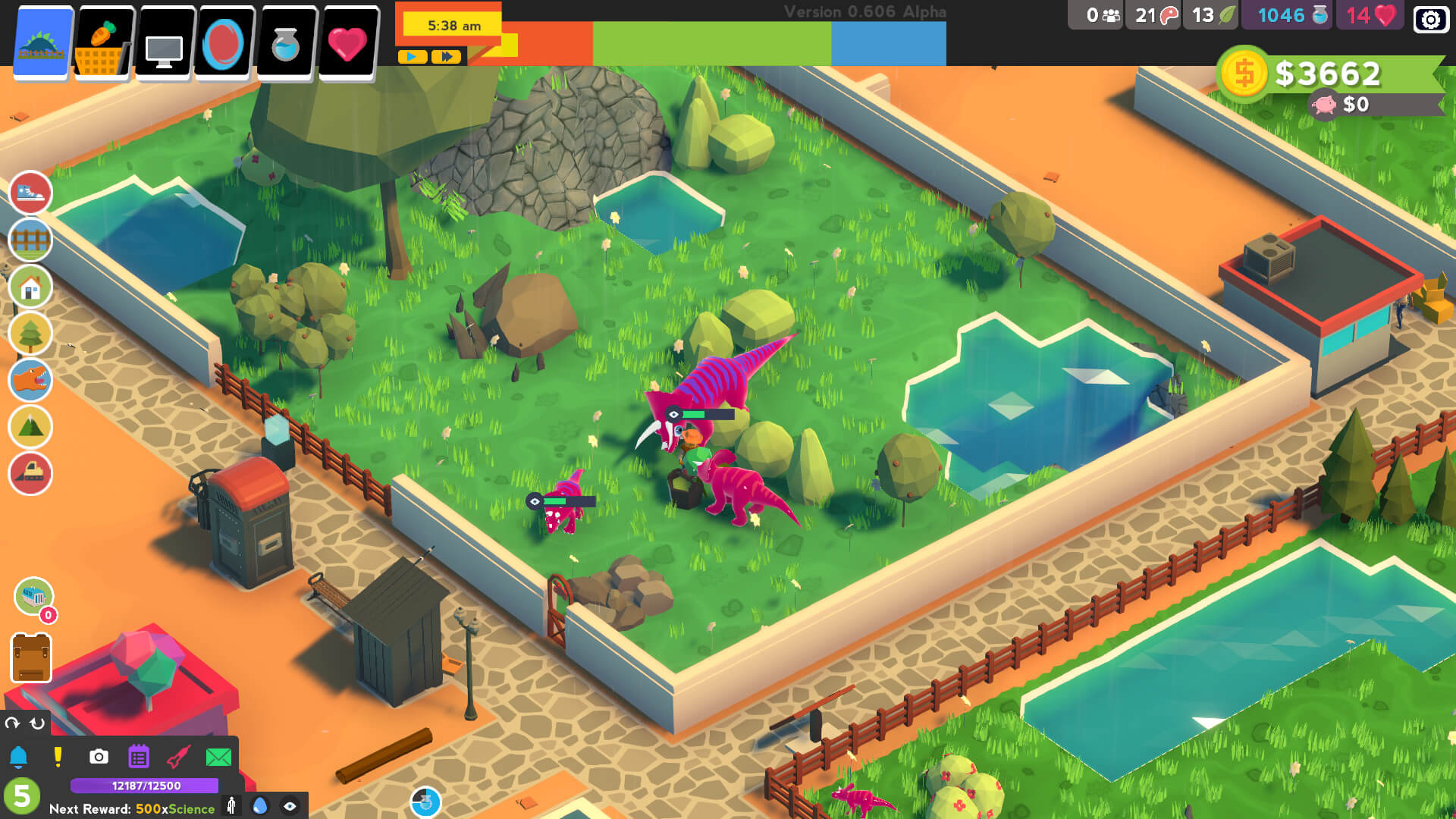 Watching these different dinosaurs is quite fun — they start to do cute things like roll around in grass and play with each other. They also get HUGE and can wear hats. 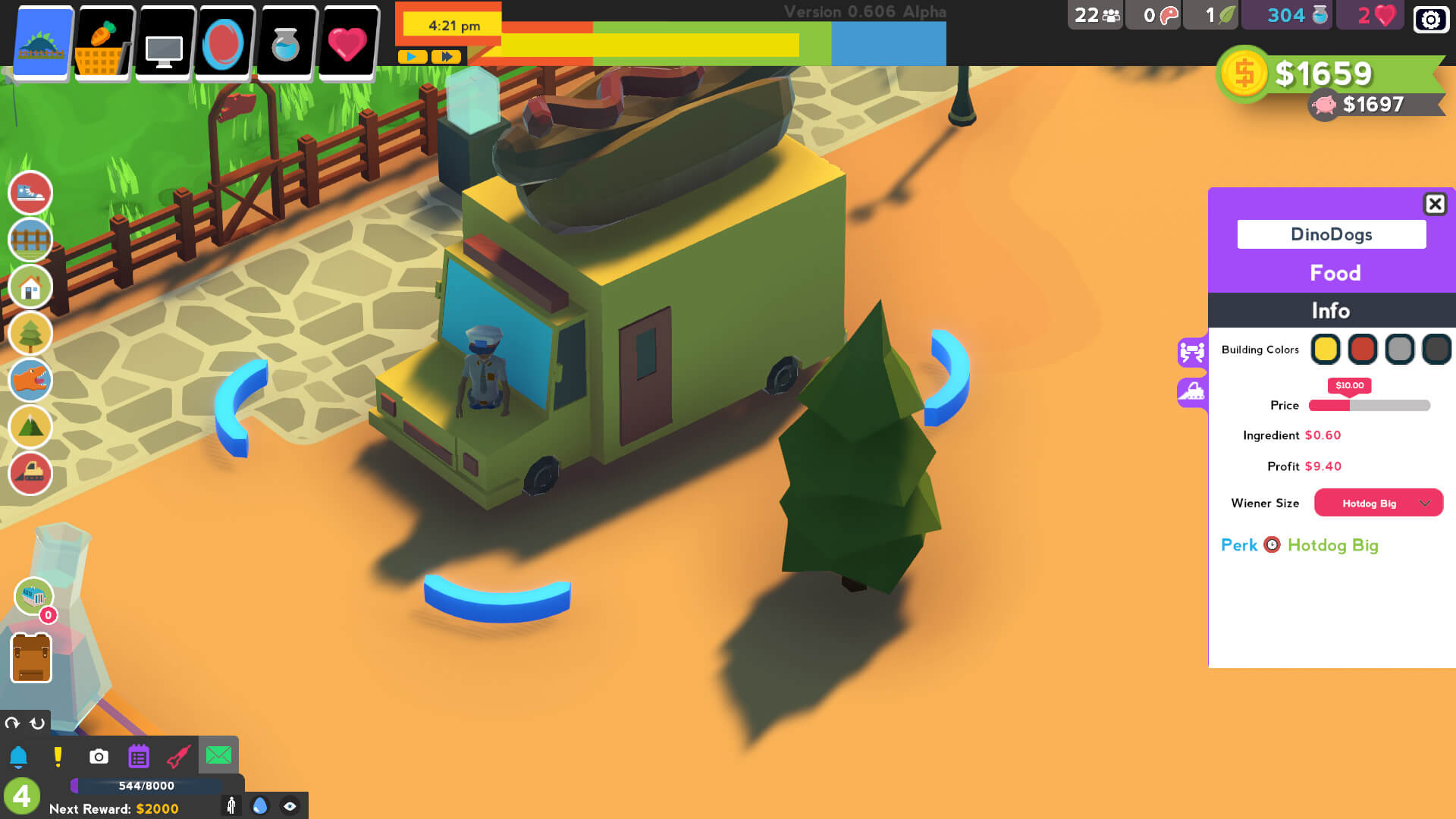 Now, I am not good at paying attention to dinosaurs, so on my first playthrough I got pretty excited about food trucks, and ended up placing one on top of my security guard. Not thinking much of it, I then built up my zoo. It seemed to be a common complaint that everything was messy, so I set my janitor (as you can hire different workers and decide what their jobs are) to only pick up trash, not to fix fences. Over time, as I had been ignoring my dinosaurs, they broke down the fence. 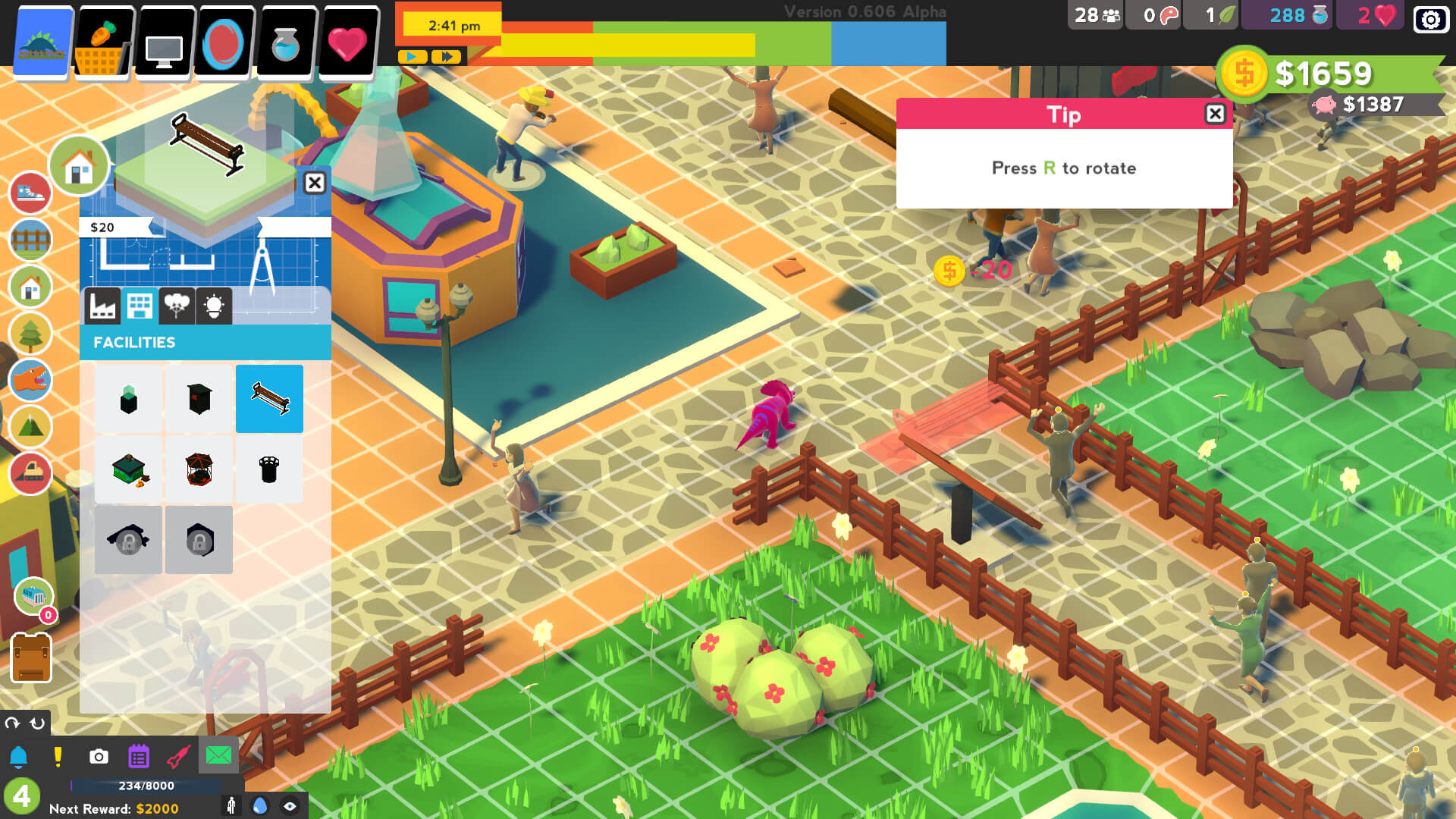 This. This is bad. My security guard is seemingly nowhere to be found, as my HERBIVOR decides to eat humans in the park, create fires, and explode buildings. I didn’t think this herbivore would want to eat humans, but apparently if you make them mad enough, they do. I ended up selling my food truck, fixing my fence, and getting the guard to capture the dinosaur once again. From there on in, I paid much more attention to what was going on around the park.

Along with creating your park, you also get to hire scientists that work in labs or on platforms, gaining science points that can be spent on a tree of new items. These items range from new gems to stuff for your park, to new items for your dinosaurs. Spending your science points ends up really upgrading the things you get to play around with. 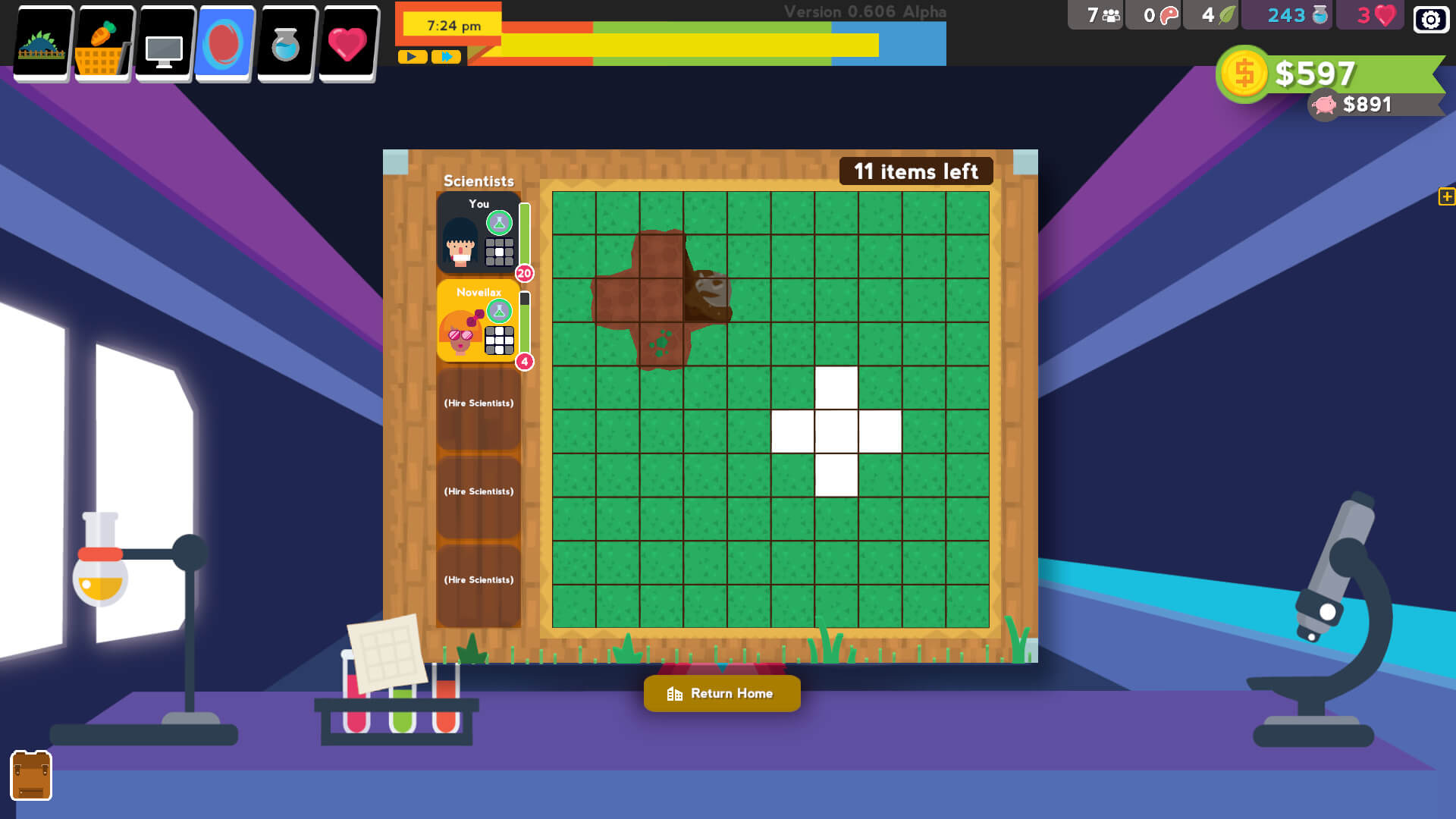 You can also send your scientists into a portal, back in time, to dig up dinosaur bones. These bones are used to create more dinosaurs. It does take some time to get the portal set up, and you need to choose what area you’d like to explore, but once you are there the real work begins. Each of the hired scientists (as well as yourself) have a different grid pattern they can dig up.

Digging up various items without breaking through into a floor below them, which causes them to shatter, is the goal. You have limited digs for each person, so you will need to spend them wisely, slowly gaining whatever you lay eyes on. Sometimes, there are coins hidden in the ground too, which add to your revenue.

At the end of each day, the park closes and you get to see a sheet of your expenses, breaking down where the money you made came from, and you also get dinosaur hearts(!) These can be spent in a tree similar to research, on more dinosaur related items. 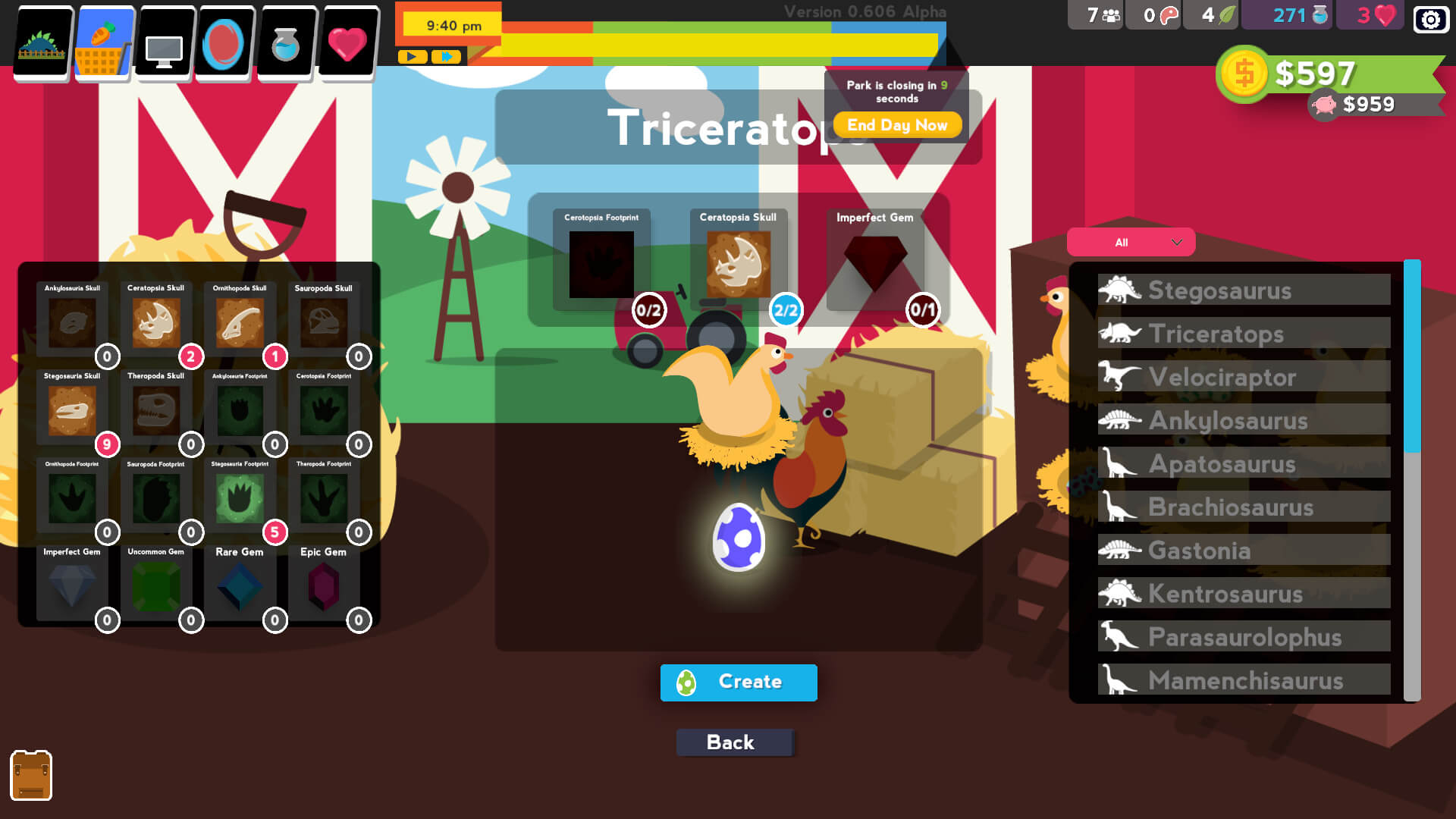 There is a variety of shops in Parkasaurus that you need to visit to keep things running smoothly. You can purchase food items for the dinosaurs, or schedule deliveries so that you don’t need to go out. You can also buy the formerly mentioned gems from a gem shop and use them to create new dinosaurs in a shop in town.

You’ll likely end up giving some of the dinosaur bones, with a gem,to a chicken, who then lays a dinosaur egg. I don’t really know much about dinosaurs, but I like the idea that they come from chicken eggs! 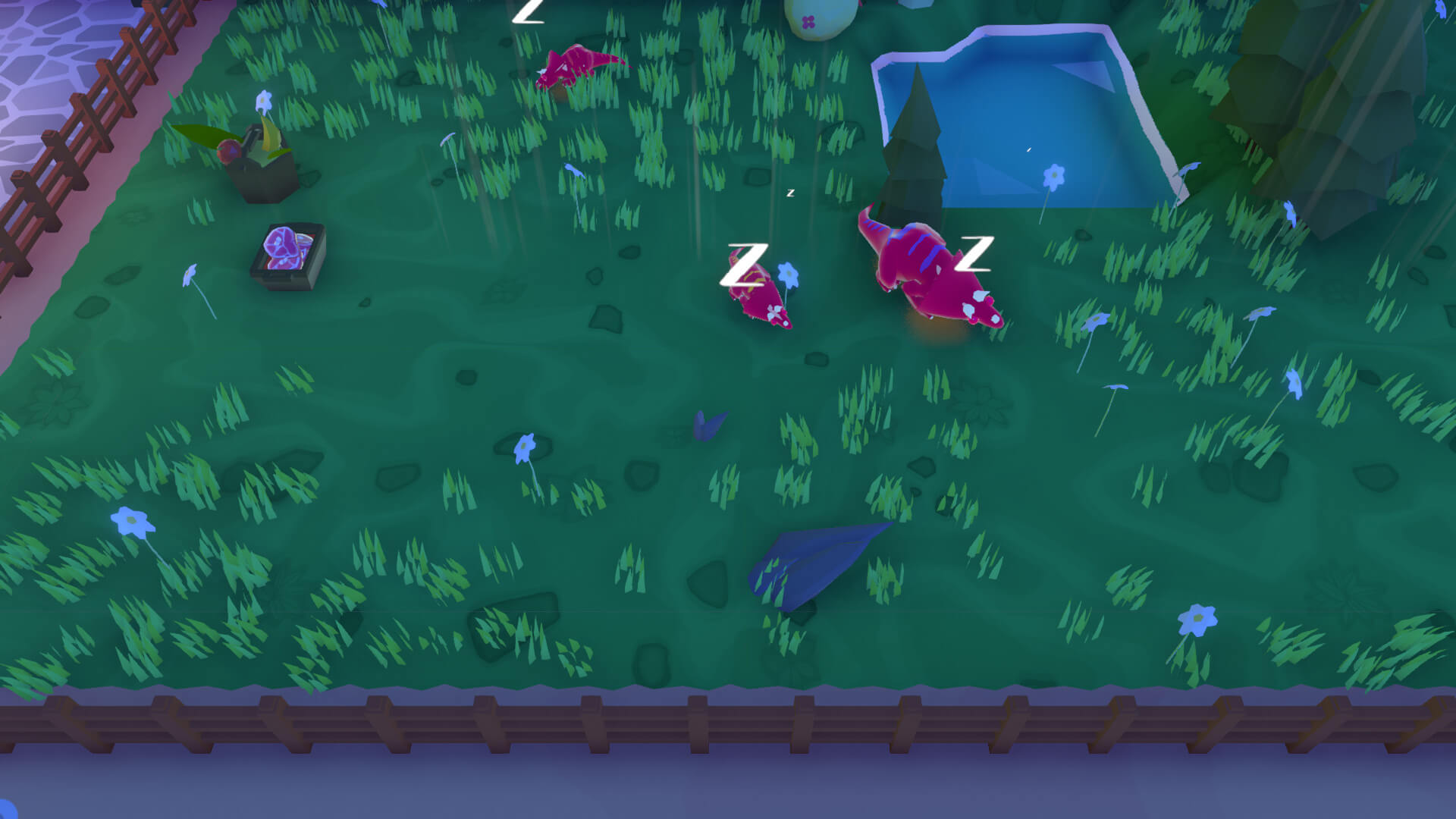 There is a lot going on in Parkasaurus — this jovial game gives you so much control and a lot to expand on within your park. Although a lot of the game isn’t explained (at present), and it does take a bit of experimenting, once you get into the game it’s super fun to create your own colorful park of dinosaurs. Creating your own perfect park, unlocking various items, and keeping the people and dinos happy will take some work — but is worth it.

Also, look at the variety of food trucks!

Parkasaurus is out now on PC via Steam.