When it comes to the streets of Paris, sometimes the buildings are placed in pretty weird spots. In Paris: La Cite de la Lumiere, you will decide where these houses go, so that yours have the most light cover from the streetlights dotted around. This game is a two player game, lasting around thirty minutes to play, with the board being built by the players in the box itself!

Paris: La Cite de la Lumiere has you picking if you want to be red or blue. Each player gets their own set of tiles, tokens, and chimneys to start the game off with. A bunch of postcards go around the box, each with their own abilities, and a pot of houses end up at one side of the board, which will be used in later rounds. On the other side of the board, we placed the extra tiles that are used with the postcards. 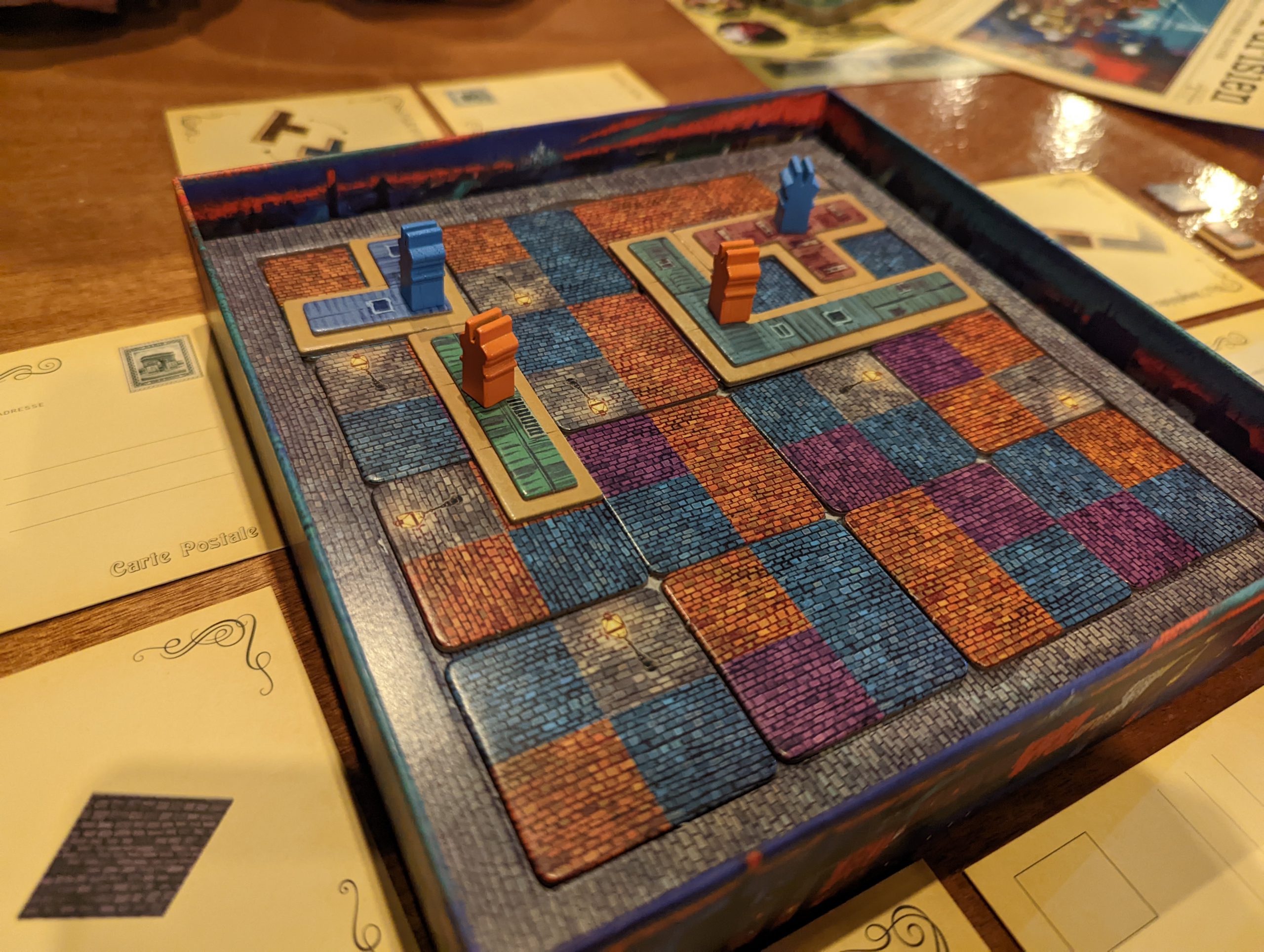 When the game starts, the first player can either place a tile onto the board or pick up a building and put it in their own pile. These buildings are placed on the second phase of the game, but if you do not have any buildings at the start of the second phase, you will not be able to play in that phase. When it comes to placing a tile onto the board, you will draw the top tile from your pile and then decide where it goes. These tiles are split into four, often having your color on them, as well as the other player’s color and purple (which is a mix of both colors). There are also street lamps on these tiles, which cannot be built on and do not come on a specific colored tile. 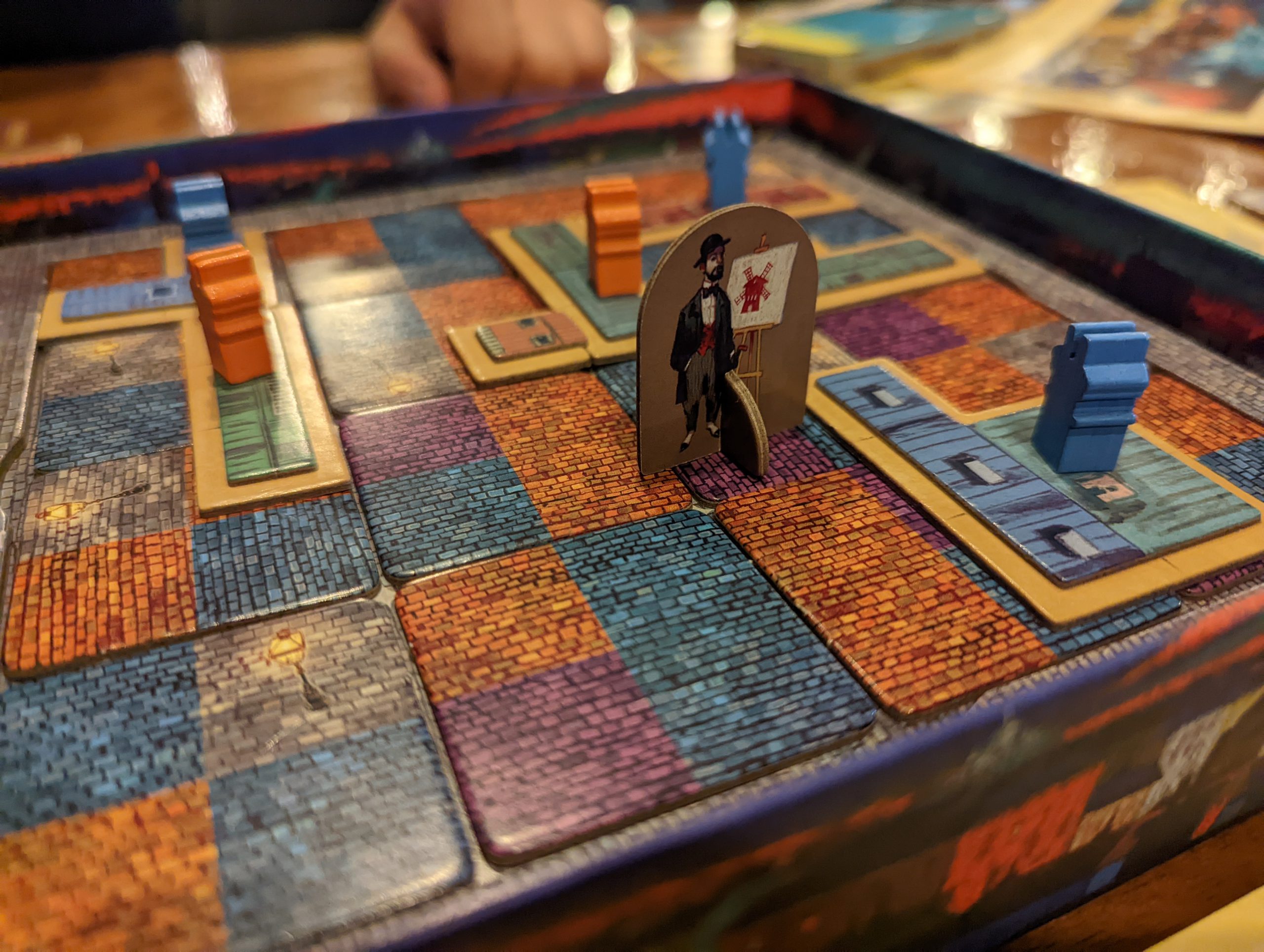 You will need to think before you place, as when you get to the second phase of the game, you will be placing your buildings on only your own tiles or the purple tiles, so these areas need to be made in a way that you can fit the various shaped buildings. Your buildings will then score points for each street lamp that its near. Once all of the tiles are placed on the board, you will then start the second phase of Paris: La Cite de la Lumiere. On your turn, you can either place a building on your tiles, then place one of your chimneys on that building to mark it as yours or use your token to claim an unclaimed postcard. These postcards can give you a lot of help in the second phase; you can swap a building you have with one in the buildings pile that was never claimed, add a secondary lamp post, increase one of your buildings by one square, and more. 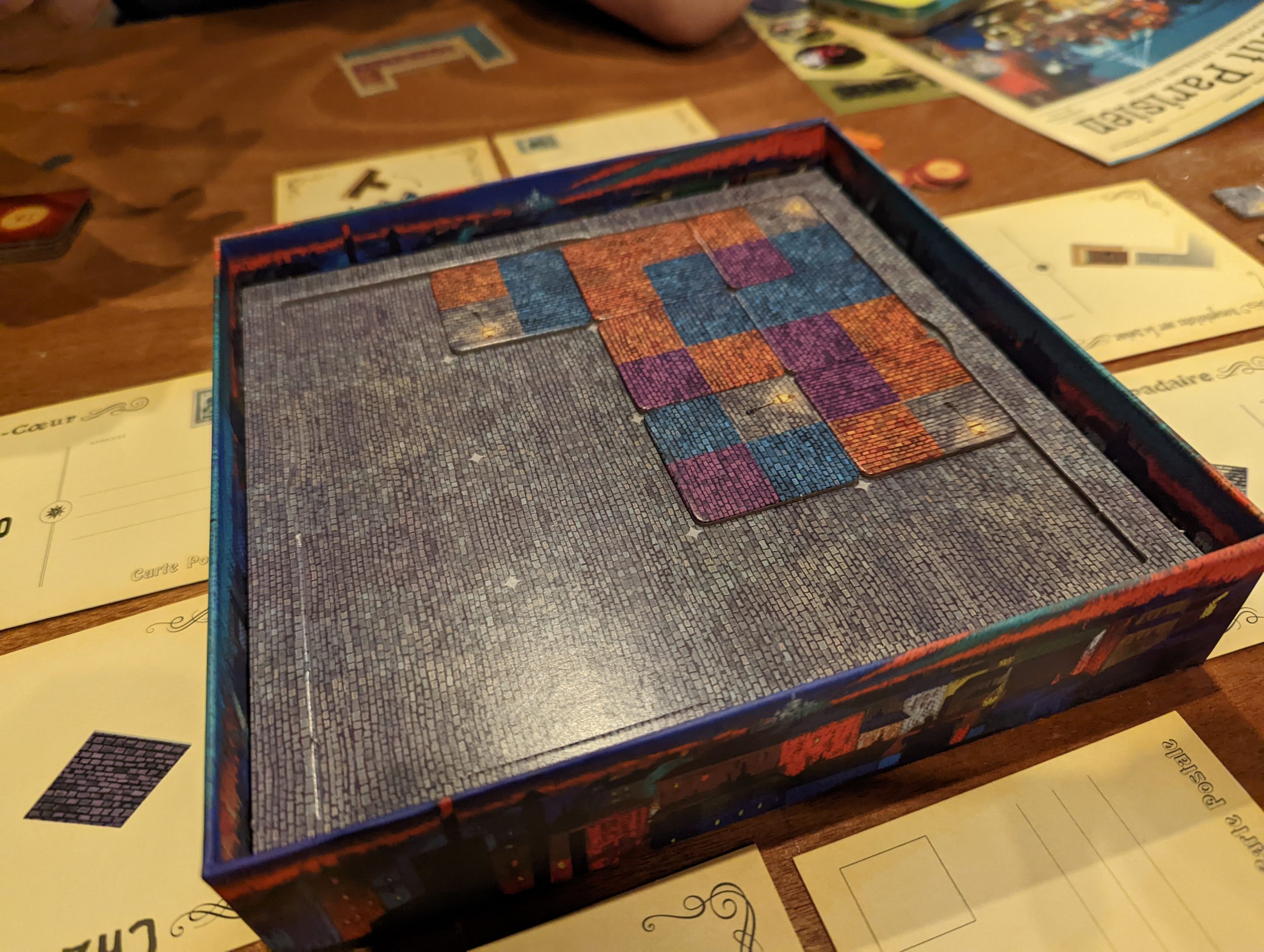 When all of the buildings are placed in Paris: La Cite de la Lumiere, your game ends and you can then start scoring. You will gain points based on your houses. Larger houses that are connected to lamp posts will give you a score based on the number of tiles you have covered with your connected buildings times the number of lamps that would cast light onto them. The player with the highest score wins.

We got the chance to play Paris: La Cite de la Lumiere at Tabletop Gaming Live, where we enjoyed playing something that is specifically two player, which is rare to see. The game itself feels clever, with the use of the box as the board being very fun. Building up the world can end up being chaotic, especially if you do not plan far ahead as you place tiles.