Outfoxed! – a kids game for all the family!

When my kids ask me to play a new board game, I’m often forced to make excuses not to until at some point, they back me into a corner and I have to sigh my way through some turgid variant on Snakes and Ladders. With Outfoxed in their collection though, the kids have learned that I’m willing to play almost anywhere, and at any time.

Outfoxed is a game in which up to four players take charge of chicken detectives. The chickens have been aggrieved by a cheeky fox who has stolen their recently baked pie — unforgivable, I’m sure you’ll agree. There are sixteen potential suspects for the chickens to eliminate, and at the beginning of the game, only two of these will be face up and known to the chickens. 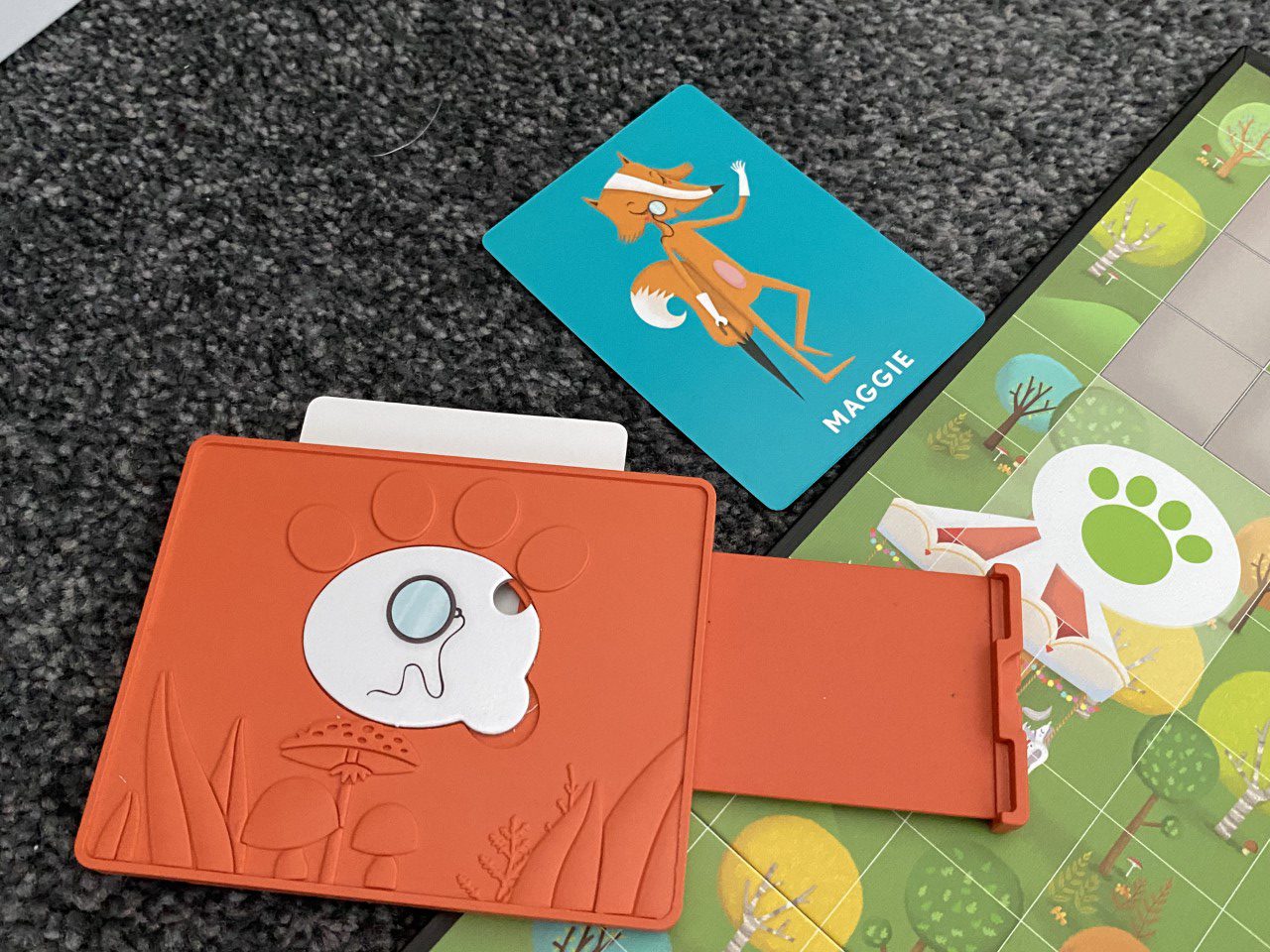 During setup, the players will secretly (and unseen by anyone) load a single “Thief” card into a plastic case that features a window and a slider that covers it. The Thief card placed in this case matches one of the sixteen suspects that will be dealt out around the board. On a turn, a player will choose to either search for clues or identify suspects — at which point they will roll three dice and use up to two re-rolls to try and match either pawprints or eyeballs.

When searching for clues, the player will want to roll footprints — with each meaning that their chicken (represented by a colourful plastic hat) can move that many spaces on the board. The minimum roll is three, and the max (which is unlikely) is six. If the player can reach a clue space, they will draw one at random and then place it into the window space of the plastic case that holds the Thief card — and then, they will open the slider. If the small “hole” in the clue shows green, it means the guilty fox has whatever accessory is shown — whether that be a bag, a scarf or perhaps an umbrella. 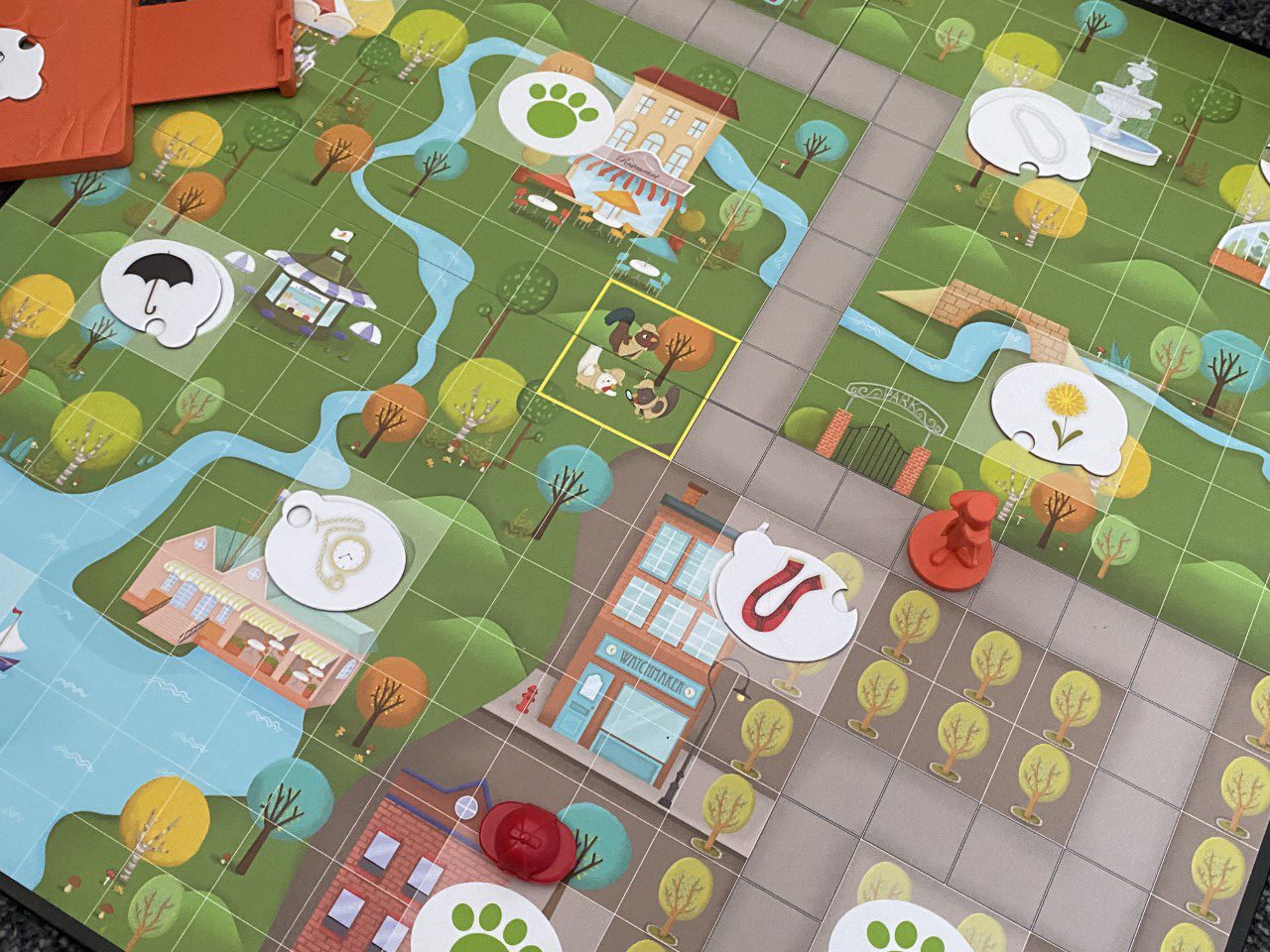 This is the great appeal of Outfoxed for children and adults alike. You see, if a clue shows green (let’s say it is a scarf) and you have three suspects showing face up and none have a scarf, then you can just immediately eliminate them, If the clue shows white and you have a suspect showing a scarf and two that don’t, then you will need to eliminate the fox wearing a scarf — because now you know that the guilty fox does not have one.

The other, less exciting choice on your turn is to reveal suspects, which simply requires rolling three eyeballs on your dice and then turning over any two suspects. It is possible now to immediately eliminate suspects who you know cannot be guilty — using the example above, if your scarf clue showed white on an earlier turn and you then turn over a suspect with a scarf, you can immediately exclude that fox from suspicion. 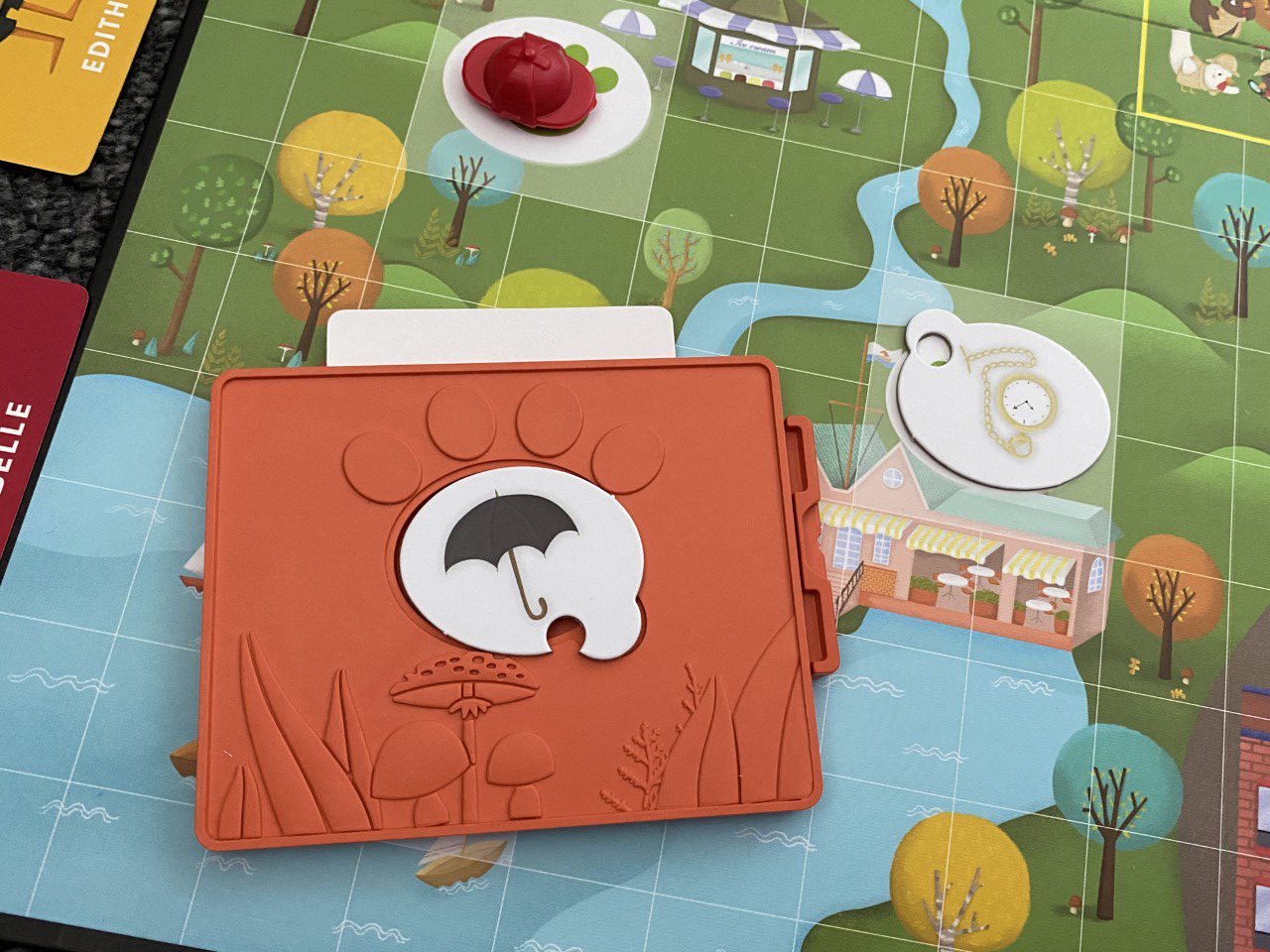 So far, so good. A simple enough game of gathering clues and using them to deduct an answer. Well, not quite. Unfortunately, each time a player rolls their dice (and then uses both of their re-rolls) and doesn’t get the three dice they need (which must be declared upfront) then a fox figure on the board moves three spaces closer to their hole. If the players miss their rolls enough times, the fox will escape — and the pie will be lost.

For kids, who have no real concept of the fact that dice rolls are completely outside their control, this can be terribly exciting and terrifying in equal measure. No game that we’ve played in recent memory is capable of causing as much shrieking of excitement and fear as Outfoxed does in our household. We win more often than we lose (probably about 70/30) and to be honest, that feels just about right to me — because the sad thing about Outfoxed is that even though you’ll all have lots of fun, the game is dictated by dice rolls from start to finish. 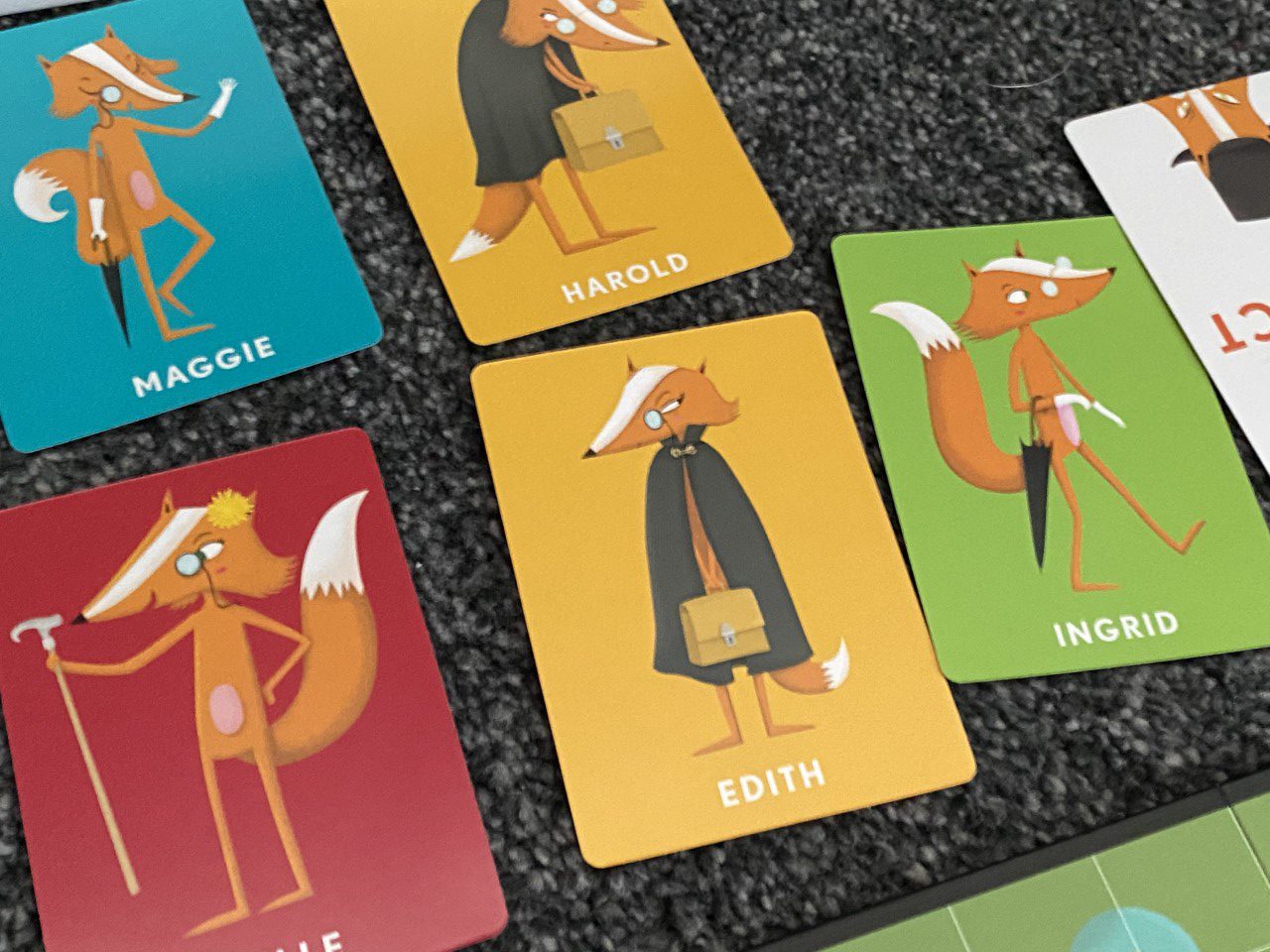 Outfoxed creates real excitement. It makes kids feel clever and it enables them to feel like they are solving a real puzzle that — if left unsolved — has thematic consequences that they want to avoid. If you play it once or twice in quick succession, it never outstays its welcome either, and the ratio of wins and losses feels just right, although you can make it harder by moving the fox four spaces instead of three.

Objectively, Outfoxed is a little too dependent on luck to completely satisfy older players, however, the joy it brings to under tens is enough of a reward for me. I would have liked to see some modules or features to perhaps change the way dice are manipulated, but I also appreciate that Outfoxed keeps this part of its flow simple, and focuses the player’s attention on marching clues to suspects. 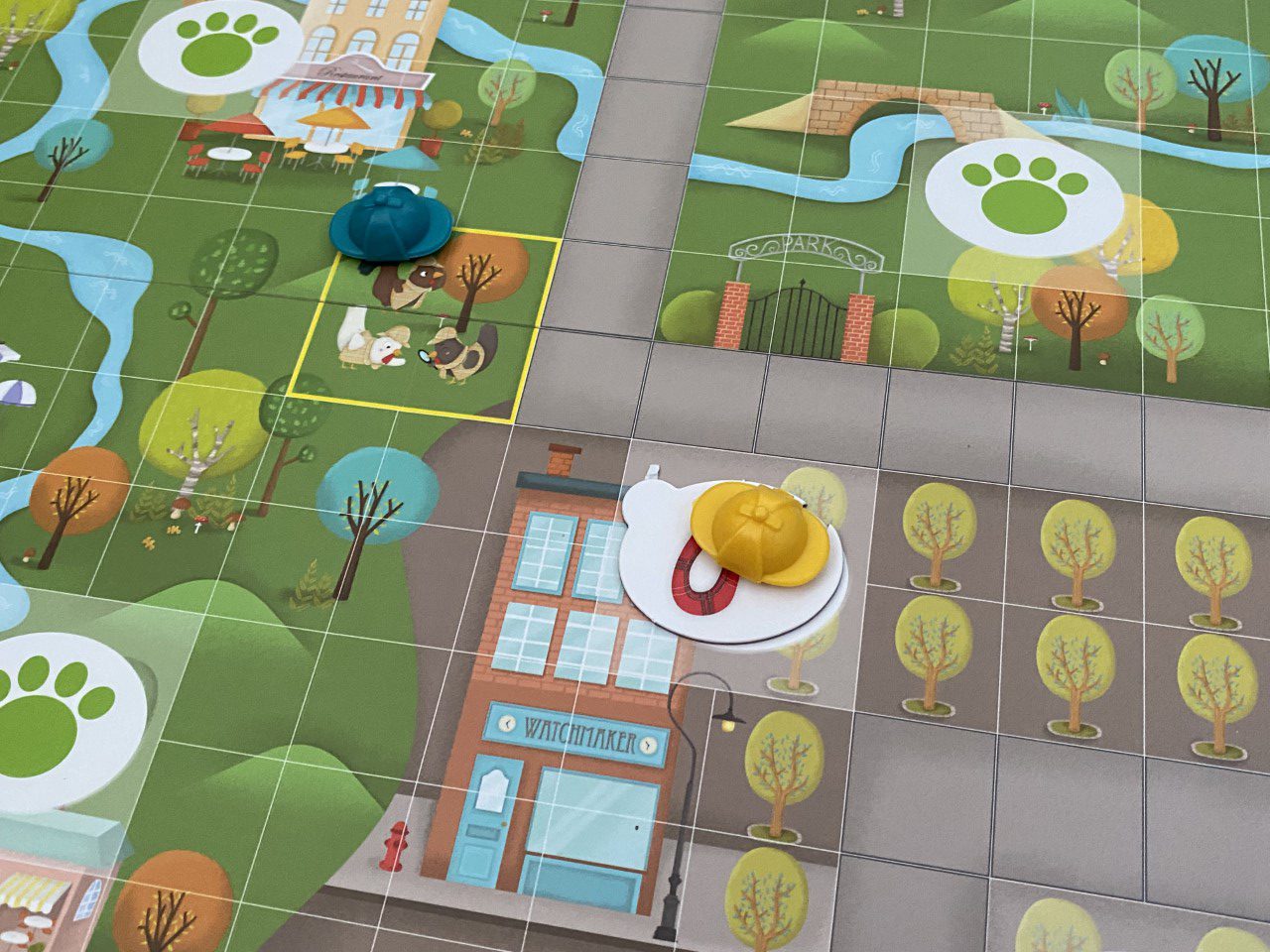 Overall, Outfoxed is a lot of fun for younger players, and even if it is luck dependent, the veneer of control created by the clue and suspect system is more than enough to entertain everyone at the table. A fantastic addition to any youngster’s collection.

You can find Outfoxed on Amazon.