Out of Space — fight aliens, keep your ship clean

I have been known to play a lot of Overcooked. It’s one of my all time favorite games. My household has also played a lot of Moving Out, so I thought Out of Space would be a great fit for us! Turns out that I was both wrong and right. Out of Space is a challenging, co-op survival game where you and your teammates will need to work closely together.

Unlike Moving Out, this isn’t a game that will allow you to carry younger or less experienced teammates. If they falter then your entire ship can end up going down. There is always a single player mode, though, which is just as fun. But, I should really get on to talking about the game itself. In Out of Space, you (and possibly your teammates or your dog) have been dropped onto a ship infested with aliens. You’ll need to clean the ship, purchase batteries to power rooms, and generally survive.

Cleaning is the main aim of the game — which can be done by mopping or splashing water on things. Larger items and doors do need to be splashed, while the floor can be sweeped. Giant oozy bubbles also can appear if slime is on the ground or walls for too long, which need to be splashed before they pop — turning into aliens and generating a mess. Aliens can be defeated by being sweeped with the mop or (for some of them, at least) splashed with water, but they then need to be destroyed. You can do that by cooking them into food to help keep your hunger bar alive, mincing them in the mincer for money or throwing them out into space if you can’t be bothered. 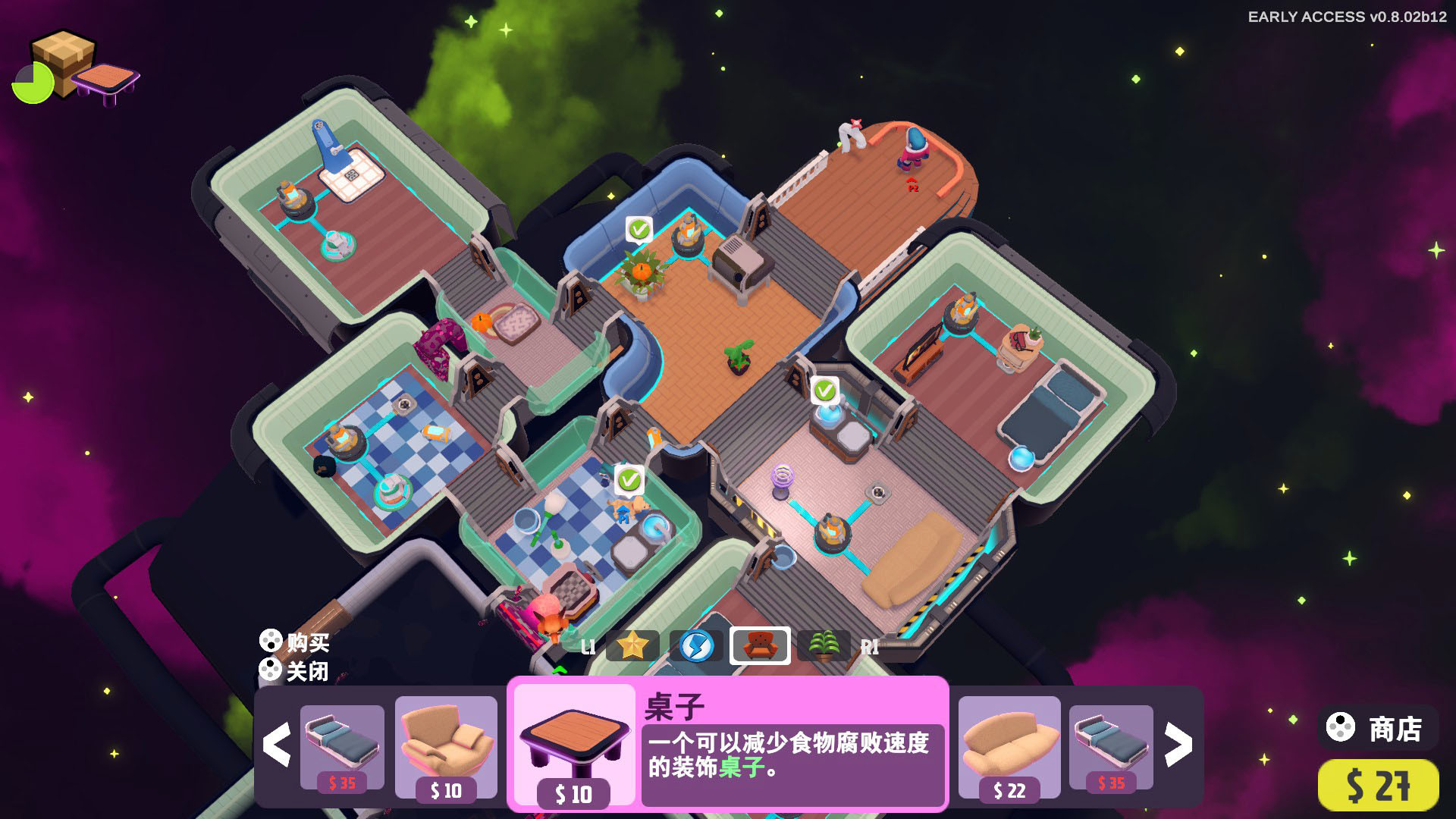 Now that I’ve mentioned hunger, your characters have needs! If they run out of energy, from not sleeping or resting, they will fall asleep on the floor. You’ll need to sleep more efficiently in larger ships, purchasing or finding beds, couches and chairs. You will also need to eat — but there are many ways to make your food intake more efficient — microwaves are quite good.

As you take over the ship and claim rooms, anything can happen. You won’t see into most rooms until you open the door — at which point aliens might be charging towards you or a bubble might explode. You never know what is really going to happen in the next room. The longer you take to clear the back rooms of the ship, the more enemies can spawn and the more ooze is everywhere.

Your character can get dirty from walking on ooze or picking up specific aliens, which requires you to shower or get splashed with a bucket. If you get too dirty then you will wrap up in a cocoon-ish shell, needing to be minced yourself or showered to be clean. If everyone falls, the ship is lost and the mission is over. 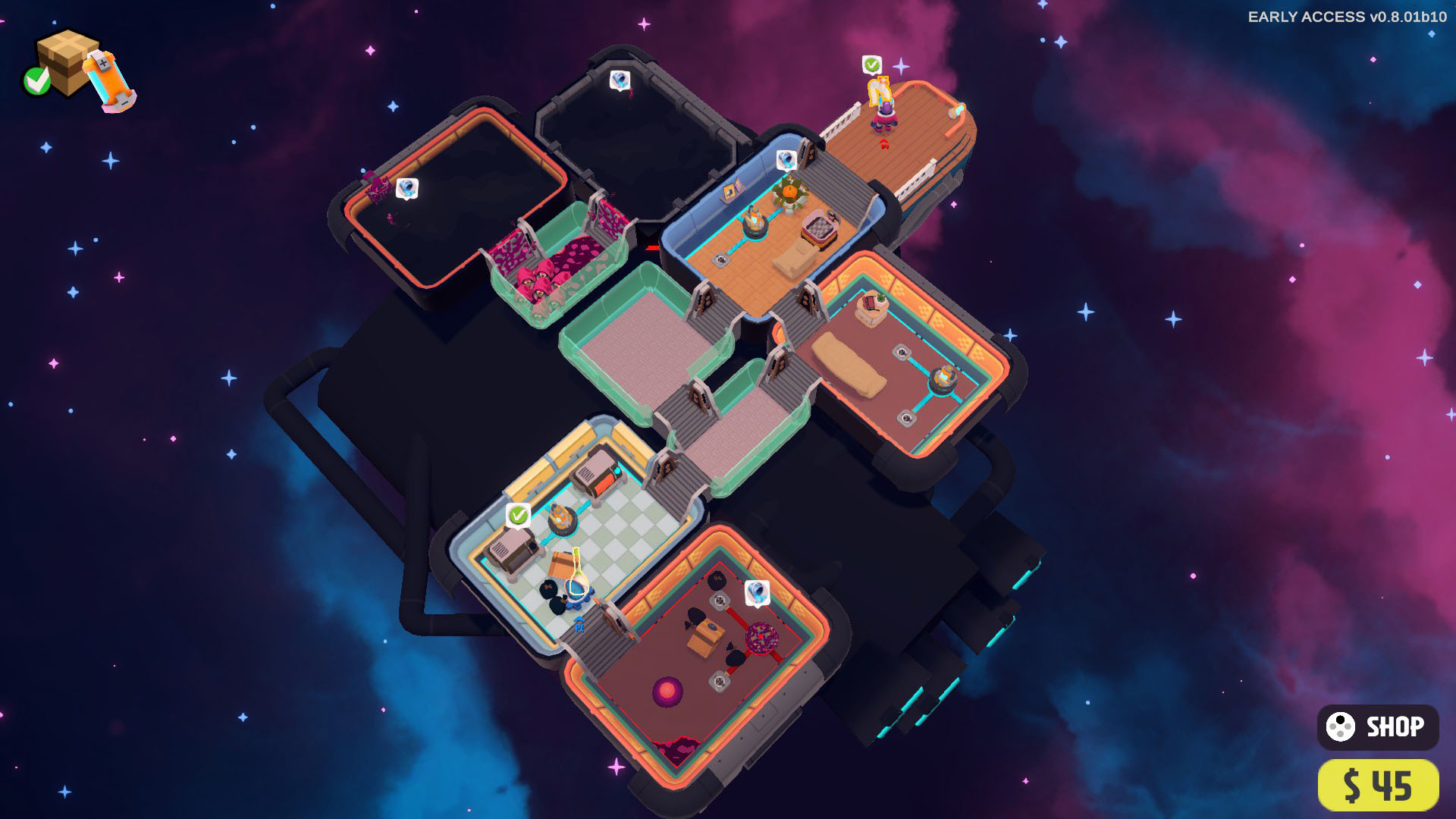 There are lots of items to make the game easier, with more unlocked when you complete more games — like exercise bikes to earn you more money, or robots that can refill water buckets and mop the floor. With so many upgrades, we almost wanted to just continue hanging out in the ship, purchasing items and relaxing after the round is done, but instead you’re pulled into the next mission. Out of Space is a great multiplayer game, sitting on your couch together. The age group for this game is aimed at teenagers and above, but you might be able to hold together groups of almost any age if you have a strong leader to help balance things out.

Out of Space is very fun and works as another good addition to the couch co-op category, with no violence really in sight, it’s a fun time for all. Even if the litter ones are just watching the gameplay!

Out of Space can be found on PC, Xbox One, PS4 and Nintendo Switch.

Love multiplayer games which aren’t violent or sports-related? Why not check out these 15?

Freakout: Calamity TV Show — Just how calamitous is it?

Away: Journey to the Unexpected is a feel good, roguelike FPS