The Sanderson sisters have returned on All Hallow’s Eve and it’s up to you and your friends to work together to stop them in Ravensburger’s card matching board game — Hocus Pocus.

Disney’s Hocus Pocus; released in 1993; has become “Halloween Royalty”. Whether it’s the witty one liners or the excellent portrayal of the Salem witches given by Bette Midler, Kathy Najimy or Sarah Jessica Parker it’s loved by many. The board game takes the film’s key plot points and turns them into a cooperative card game where players need to defeat the witches by sunrise or fail in the knowledge the children of Salem have been taken by the wicked witches.

The board itself centers around the witches’ cauldron, within which they brew a terrible potion to steal the life force of the local children. Players must match played ingredient cards into the cauldron in hope of stunning a witch and progressing the timeline until dawn arrives with victory.

The cards themselves are all based upon ingredients mentioned or used within the actual film script as are the potentially chaotic spells that the sisters use against you should you play ingredient cards bestowed with a spell book icon.

Different parts of the cauldron depict colors and types of ingredients and is used to determine what cards can be played in any section. Once a card is down it then determines the next type to be played on that space, so for example if the starting space is a green newt then you can only play green cards or newt cards onto that spot. If it were replaced by a green toe card you could then play any toe card or any green card next.

Stunning the witches in Hocus Pocus needs players to communicate well or preempt what other players are likely to play based on the current cauldron makeup; which is much harder than it sounds. Players on each turn must ask a simple question to the other players to help them determine what’s in their decks but it isn’t specific as you can only ask if anybody has a certain type of ingredient or if they hold certain colour cards. You then play a card into the cauldron, carry out any follow up actions and replenish your hand from the ingredient pile.

By luck or strategy, players need to align the cards in the cauldron with one of the three witches requirements on the Witch Board. Sarah requires all the ingredients to be the same colour whereas Mary needs all the ingredients to match. Winifred as the strongest witch needs you to match all the same ingredients but each has to be a different colour. Stunning a witch ends a round and the timeline progresses but also places that witch under a stun condition meaning she cannot cast any spells until conditions change.

Winning in Hocus Pocus relies on players stunning the Sanderson Sisters three times to reach dawn whilst depleting the ingredients stockpile means victory for the witches.

The witches are fairly powerful however and this is proven in the run of play. When cards are played which have a spell icon on them, the witches can cast spells. Each spell is also taken directly from the film and is either a line or verse with a specific outcome used by a selected witch. These range from limiting communications (Sarah) to discarding 5 cards from the ingredients pot (Winifred). 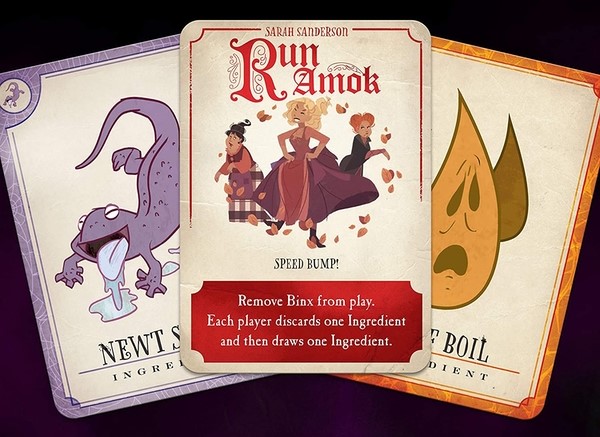 Countering some of these elements are a number of items you can utilise to turn the tide strategically in your favour. Binx the cat from the film is also depicted on some cards. Playing that card allows you to place the Binx token in front of another player and they are then allowed to share the content of their hand with all players until Binx is moved or a spell removes him. Players are also allowed access to 5 action tokens which can only be played once each per game and allow skipping of actions, removing spells or trading cards.

The board, cards and spells are very well presented with high quality artwork or lettering giving that halloween-esque feeling from the font typeface utilised. Cards are glossy and not too thin to be easily damaged and the counters are easily handled given the audience Hocus Pocus is aimed at.

A simple premise on paper, turns may only last 10-20 seconds but rounds can last anywhere from 5 minutes to 20 minutes depending on the deck shuffle and the spell types in play. Having almost completed a round a single spell can destroy your hard work by removing and discarding items in the cauldron instantly and if you happen to hit Winifred spell cards often then the stockpile can be reduced drastically in a few turns. Given the number of cards utilised in a round and the limited number allowed to be reshuffled into the deck between rounds then the likelihood of victory depletes faster the longer rounds take.

Transferring some of that Disney magic from the screen to the tabletop helps get players in the mood for Hocus Pocus but younger players may be deterred by its hidden difficulty. You don’t need to be a fan of the original Disney masterpiece to enjoy Hocus Pocus but it definitely helps to be acquainted with the material.

Slimy Joe is a board game full of slime!