Norco — Everything That Rises Must Converge

Stepping away from Norco the game, here’s the slug line: “A sci-fi southern gothic adventure…” I stopped reading here. They had me within 5 words. It delivers on this basic sentiment with enthusiasm and then some; creating a swirl of decay, desperation, hope and faith which would make Flannery O’Connor herself smile.

Everything within Norco’s world is dying, or dead, or being choked under the boot of a gigantic capitalist monolith, much akin to the real place. Norco, or New Orleans Refinery Company, is a real town living in the permanent shadow of Shell. It bears deep scars of the constant churn of industry, and the slow choking that has on people. Here, in a beautiful point and click adventure, is an exploration of those textures and people.

Norco is one of those games where gameplay is kept relatively simple in service of a strong narrative focus, perhaps closest to games such as Disco Elysium and Night In The Woods, especially in its synthesis of genuine humanity and the strange. Within Norco, the strangeness is within small textures owed to its genre; broken and beaten people just trying to scrape by, with a lean towards faith and religion. Norco similarly has a unique approach to narrative choice, again revolving around smaller details. The story itself is linear, with branching endings, but generally speaking all choices affect how characters see each other, specifically how protagonist Kay reflects upon her relationships, and how that impacts the ways in which she interacts with them. 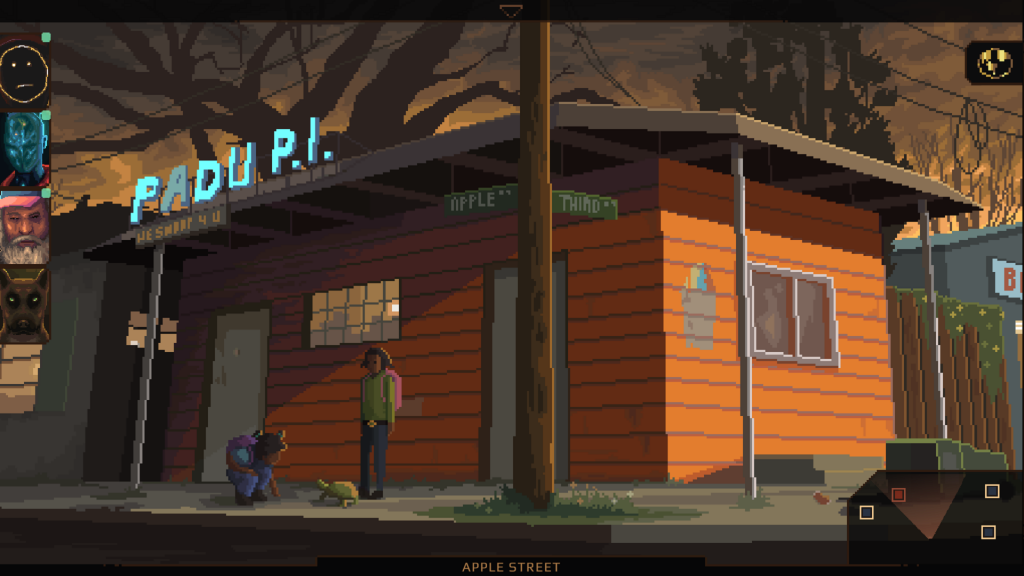 There’s an economy of language in Norco which allows nearly every facet of the writing to shine with subtle details. Relationships are established and unfurled with a huge amount of grace, as is the wider narrative of Norco’s setting and people. There is just the right amount of expository detail to leave aspects of the fiction to your imagination, filling in the blanks with utterly gorgeous pixel art. It feels real. These aren’t characters in a game, they’re people, trying to find reasons to keep going in a sick and rotting place. Norco shows that no matter how terrible it all is, no matter how little hope you find, you can find beauty. Either with other people, and connections where you least expect them, or just in the strange beauty of the world around you.

Norco touches on a lot of themes, extremely pertinent to the world we find ourselves in. Profit is placed over people, with tales of dangerous jobs having to be worked. Teenagers are displaced, angry and lost, easily swayed by anything offering them home; be that on the left wing, or in Norco’s case, becoming a mall nazi under the thumb of a crazed preacher. Folks drink and chat about their lives in an honest, humanist way and Norco invites you in to see how they’re doing. It has such a deep empathy for every character, and takes the time to hone in on why they are reacting to the hell they find themselves in. They’re funny, scared, hopeful, ultimately — relatable. None of them have quite given up. They’re all just holding on.

I wish I could just write and write about Norco in such terms, but there is unfortunately a but. For some reason, that still kind of escapes me, this lovely point and click adventure has a combat system which was just so easy it felt pointless. There wasn’t really ever a point I wanted to fight any of these people, even the drones later on, but you gotta. And it’s a bit clumsy. Norco is very good at having a lot of variety in its limited slate of interactions, you’ll go through text adventures, puzzles, even guiding a boat around. But these sections, fleeting as they are, put a small damper on the whole thing.

Ultimately though, Norco is a game that fully understands when to mix things up. I’ve spoken a lot about the general entropy at the heart of the game’s fiction, but honestly the writing is just as varied as the gameplay. It knows exactly when to drop a good old fashioned joke, or some of the straight up funniest diatribes I’ve seen in a game. Keep an eye out for a hot dog guy. It really hammers home that beneath everything, these characters are so well written they are simply real people.

It is a hell of an experience, and one well worth taking. It’s yet another game that I’ve gotten to review that will most likely never leave me, and has so much to sit and think about. It’s an incredibly hard game to shut up about, in all honesty, so I’m going to leave it here just to give you a break. What a fantastic game.

Norco is available on PC.