When it comes to Xbox Controllers or controllers designed specifically for use with Xbox, we have had a look at a few, especially those from Nacon. They tend to put out affordable and useful controllers that have a variety of different features. Though we have previously reviewed the Nacon Pro Compact, they have released newer models which are more stylised for us to check out!

These new camo controllers come in a grey camo and a green camo, which feels designed for the tweens and teens in your life who are just getting into gaming. The Pro Compact Controller is 15% smaller than the Xbox controller that will come with your Xbox, which is why it is called a compact controller. This makes it more ideal for those with smaller hands, who might be doing a lot of gaming on Xbox. The controller is wired, but has a long, 3M cable, which will allow you to have some range to your xbox – and if you are letting kids use it, there is a fail-safe detachment on it, so a big tug will result in the cable disconnecting instead of your Xbox falling off the shelf. 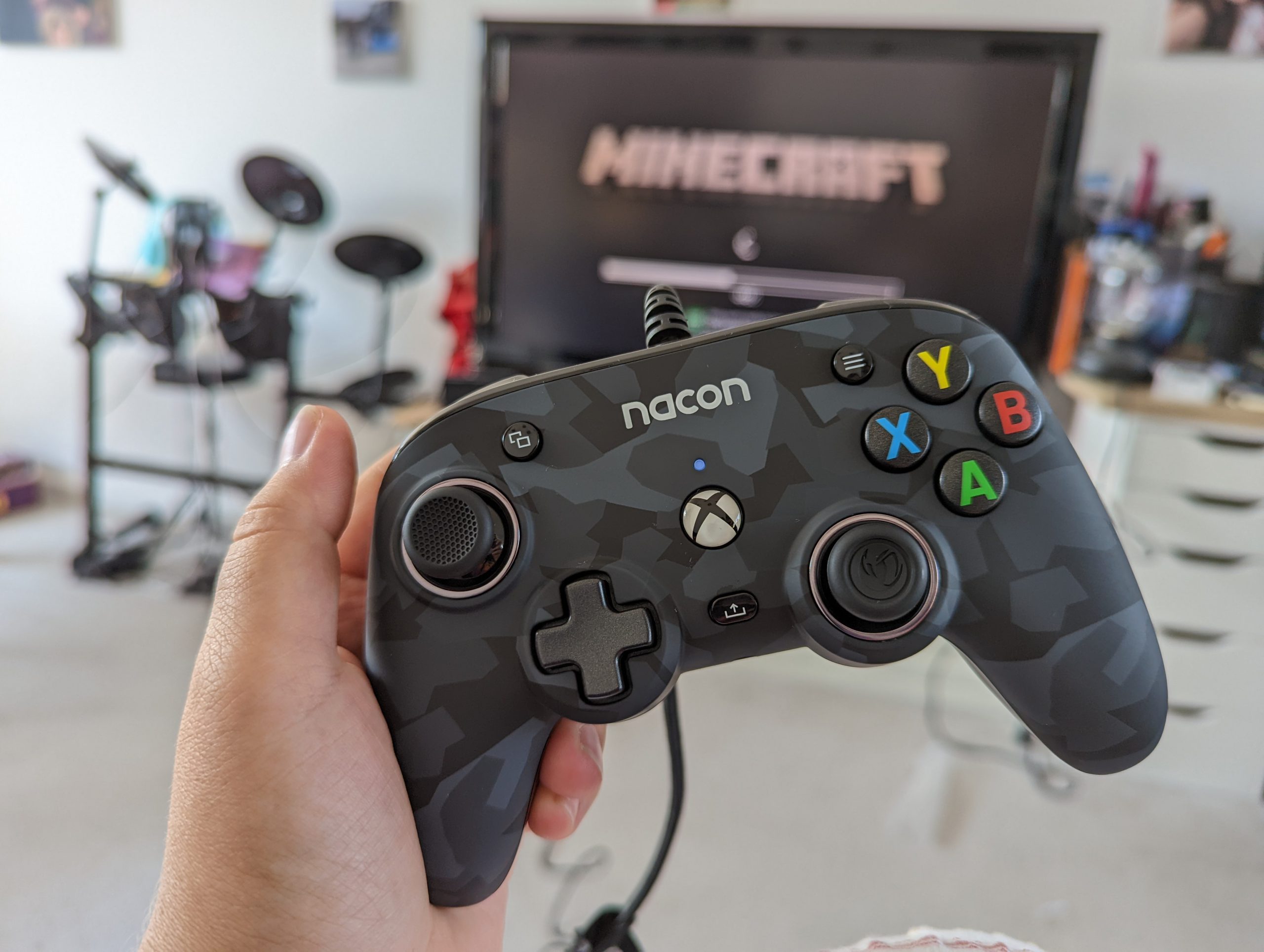 The Nacon Pro Compact is a controller that is smaller and lighter, with the main difference from a traditional Xbox Controller being the placement of the menu button and view button, which are both higher up and further apart on this controller. As they are not buttons that people tend to use during gameplay, this change doesn’t make much of a difference and the buttons are actually a bit easier for smaller hands to find and push, which can be good for those with smaller hands.

The buttons themselves do not feel as tactical as a traditional Xbox Controller, as they are flat instead of rounded and don’t feel as satisfying to me, but are still easy to use. The joysticks on this controller are a bit more sensitive, which can change slightly how you play, but it’s not a major issue. If you want, you can actually remap the buttons on the Nacon Pro Compact, and there is a switch on the back that allows you to toggle this custom mapping on and off, which is useful if you want a specific layout for your favorite game. 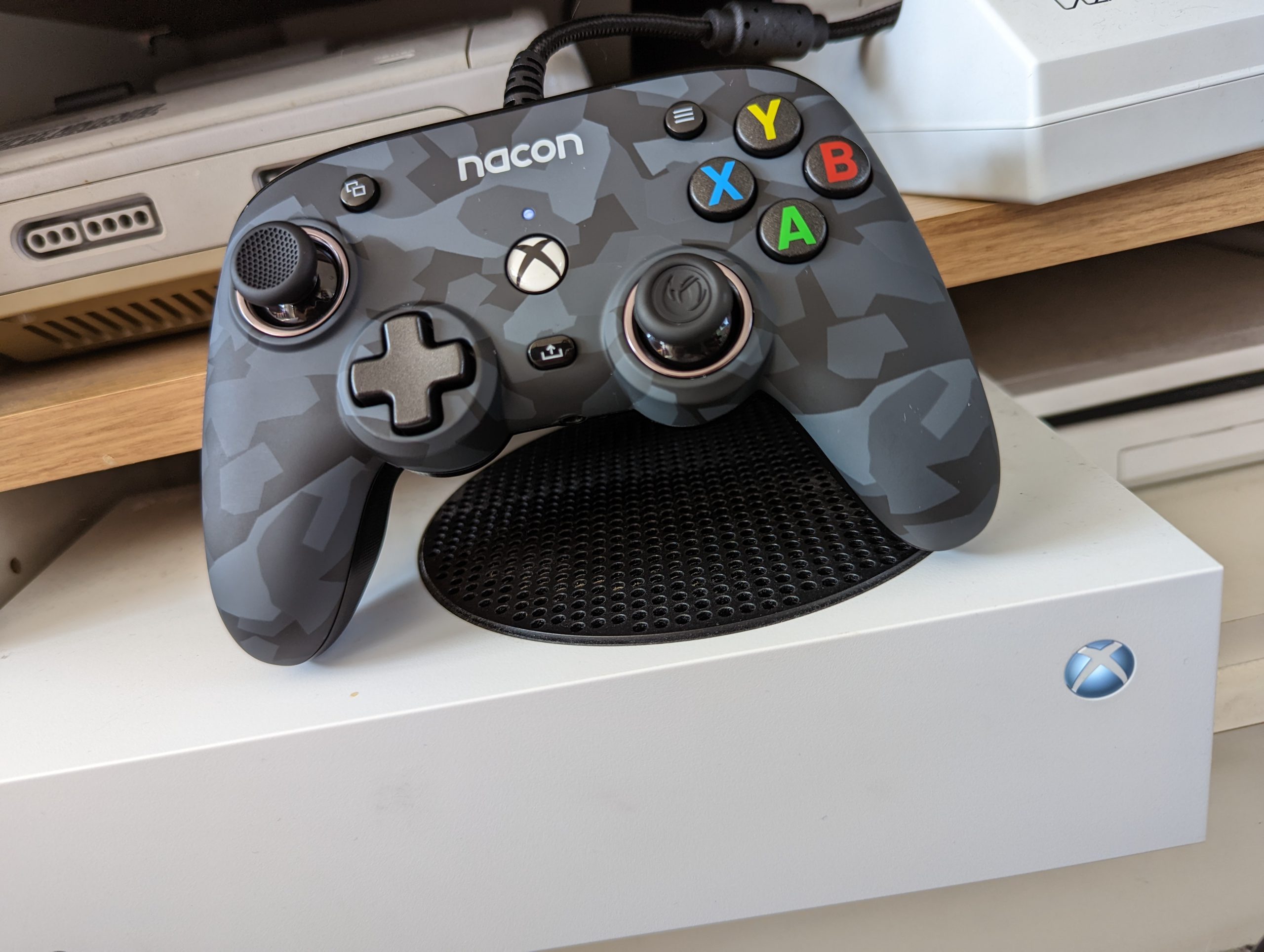 This controller does also have a jack, so that you can listen to audio using headphones through your controller. It also comes with a license for Dolby Atmos, which is a well known surround sound service. Normally, you’d need to pay for this service with a separate licensing fee, but it comes by default with the controller if you want to upgrade your audio experience.

Now that we have gone over the controller generally, let’s talk about the design. Both versions of the camo pattern look like camo. They feel like something a young boy would gravitate towards. Previously, we have dabbled with adding skins onto our controllers, and have found that often it’s a bit tricky to get the skin perfectly on there, and younger children will tend to pull up at the edges, if they can. With the Nacon Pro Compact, as the camo design isn’t a skin and is apart of the plastic, it feels more durable and more unique.The finish on the design is matte and feels smooth to the touch, it’s just a nice addition to the theme you’d possibly want for your gaming setup!

You can find this camo version of the Nacon Pro Compact Controller on Argos.

Roguebook — The sequel to thief pamphlet