Mysterium Park has you contacting ghosts

I always find games with a paranormal element to them really interesting. Mysterium Park has you take on the role of either a ghost or a psychic, trying to solve the mystery of what happened to the park director, who did it, and where it happened. This is all done through six rounds, slowly taking you through different phases, if the ghost and psychics can work together.

First, you’ll want to pick one player to be a ghost, and then have the rest as psychics. Being a ghost, for me, was the hardest role in the game. There is a lot riding on the ghost, who is unable to really communicate with the psychics in a meaningful way, and for the first time you play, the psychics will not understand that and just straight up expect more from you, but I digress. 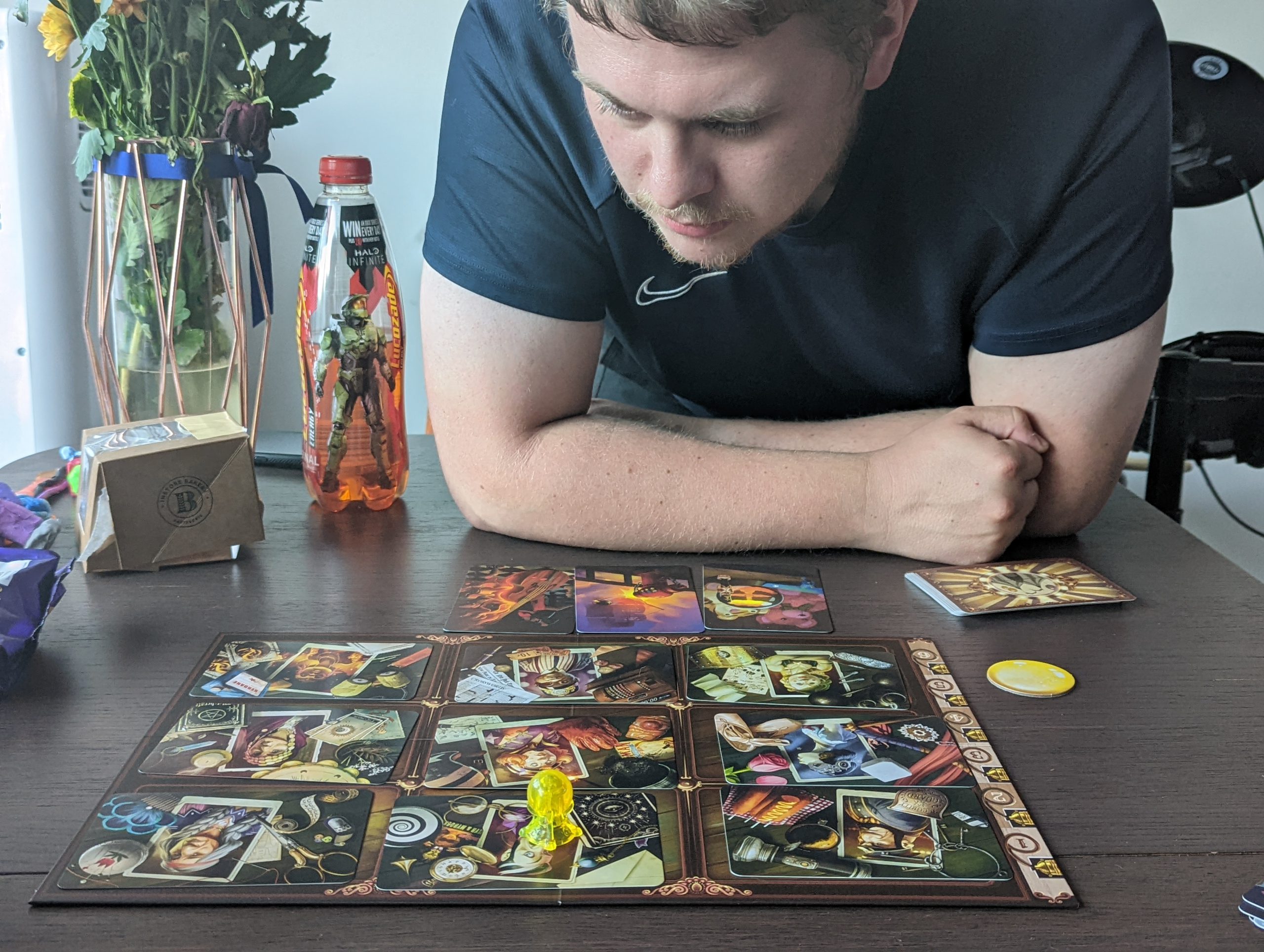 The psychics will need to choose what colors they are, then take both a token and a meeple. A board is placed in the middle of the field, facing the psychics. The ghost needs to sit across from the psychics, setting up their area. The ghost area has three cards, which represent each round, with the current one in the round holder. They also get a hand of vision cards, which can have up to seven cards in it.

In Mysterium Park, the psychics get their pieces, and are able to set up the board. Round one is all about finding out who killed the ghost, so the psychics will draw nine random player cards and place them into the board. Then, the ghost will choose who to communicate with. They will then give that player as many vision cards as they want, to get the player to place their meeple on the same color space as the card only the ghost can see. The ghost cannot communicate beyond handing these cards to the psychic. 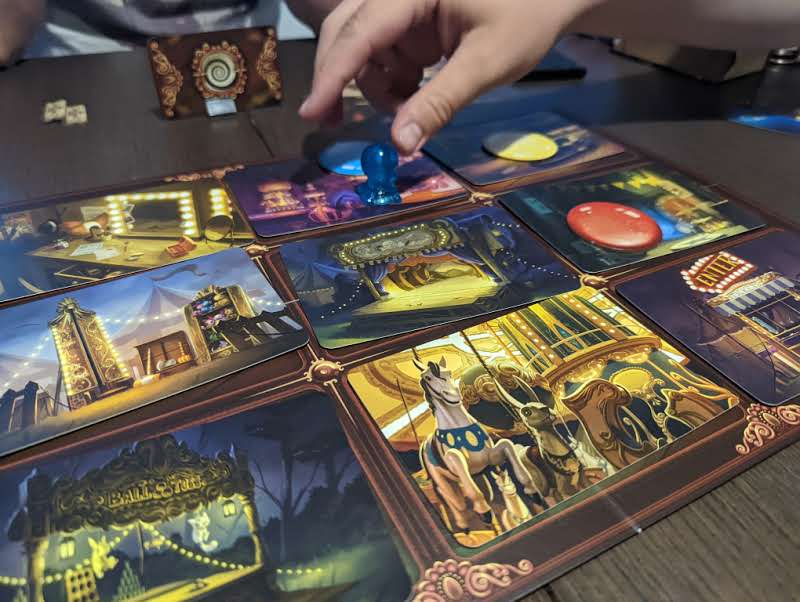 However, these cards are very loosely related to the character (and location!) cards on the field. There are so many things going on in all of these cards, that the physics, if looking too deeply, can find ways that the vision cards connect with everything else. It becomes a big game of hope and of listening to how players connect cards to the cards on the board, and using that to help you. The ghost does get three tokens that can be used to discard any number of cards from their hand and redraw them, something that I used up quickly. After every individual player gets their cards, the ghost can draw up as well.

Once the psychic has a guess, they need to put their meeple on that space. After all the psychics have a guess, the ghost then can resolve the round. One of the cards on the board is a witness card and if a psychic lands on that card, they get a secondary guess and have to be resolved first. Otherwise, it’s up to the ghost. Any players on the right card put their token down in place of their meeple, and then are done until all of the physics have guessed correctly. 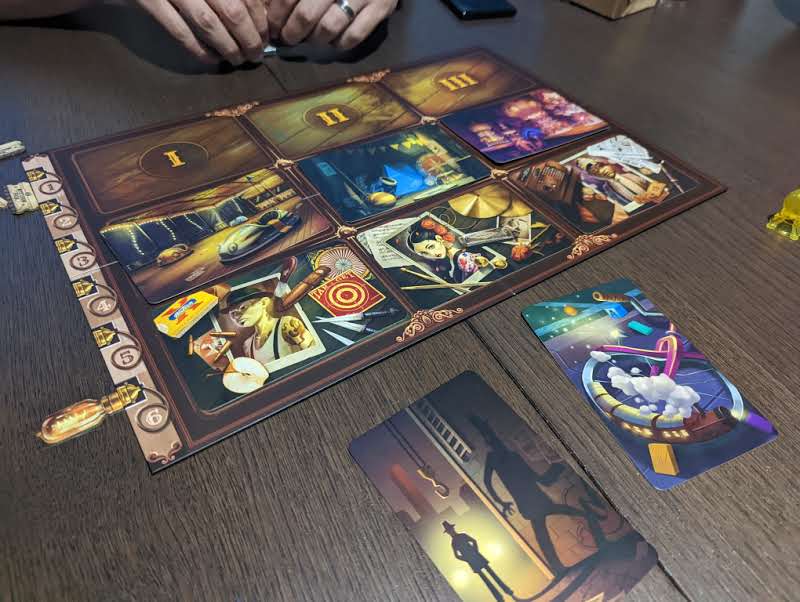 After the players have found all of the people involved, these people are then put in a pile and the rest discarded. There is then the second phase, where locations are put out just like the people, the ghost switches the round card telling the ghost where to lead the physics, and then they start again until the locations have been found. The final phase of the game then happens.

In the final phase, three rows are put out, which each have one location and one character. The ghost then can give two cards to the physics, one representing the location and the other the character. The physics then need to agree on which row is the best fit, and guess for that. If they are right, everyone wins!

The entire game does have six turns, making it quite short. If you spend until turn five finding the characters needed, it means that you probably cannot finish the game successfully. It’s super challenging the first time you play, and even more so if you don’t let the ghost reset their tokens for re-doing their hand each phase, a house rule we put in to make the game more reasonable. 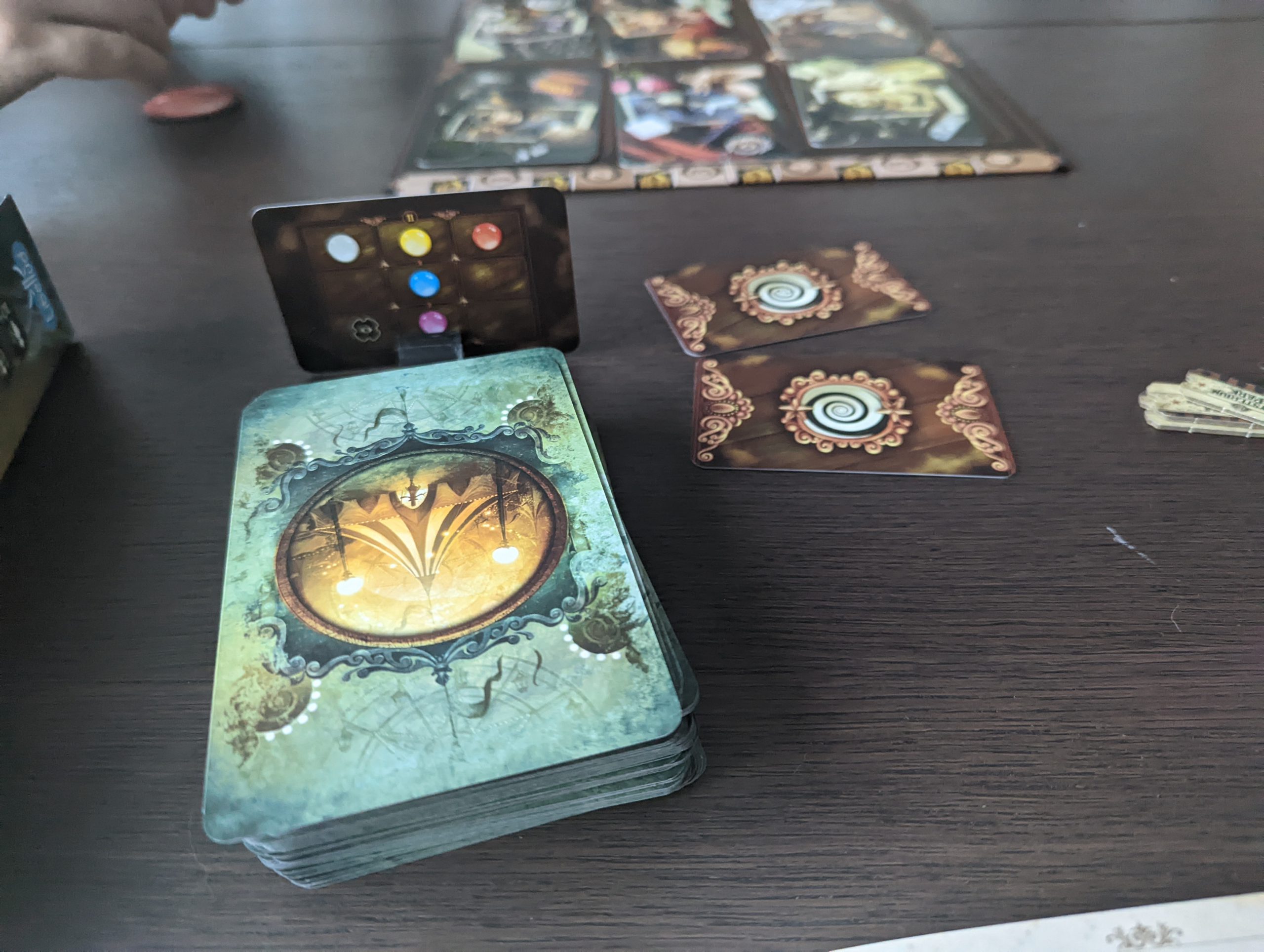 It’s a really interesting game, and one that I quite enjoyed. The cards themselves are really beautiful, and the idea behind them is really fun. Mysterium Park is super easy to understand, play, and explain, with the only complications being if the physics look at cards differently than you do or do not communicate how they came to their conclusion.

You can find Mysterium Park on Amazon.