Explore a futuristic, pixelated city populated by alien creatures of various species in this first person experience with no goal, no aims, just exploration to be done.

Bernband is not like any other game, although I could be funny and say that it’s not different either. With its weird name and gameplay, it’s quite the family friendly game that is strengthened by the great casual exploring element of an alien city that is based in space. If you like your simple games that don’t contain killing, stealing, and using guns then Bernband is just that type of a game, more than that it’s an experience, a wander through an alien land that perfectly captures the awe you feel as a tourist in foreign lands, or on a ramble through woodlands as a child.

Bernband is set in an alien city called Pff, which lets you explore the world as an alien, navigating around alongside all of your brothers and sisters, and these NPC’s that are roaming around are also aliens. This game lacks a story, and while intentional, I believe this game would be a lot stronger with some form of a story. With the addition of a story, you’d be able to really make a bond with your character and the others around you. In addition to that, making it interactive with the other aliens for example would help to build more knowledge of who these individual aliens are, what they’re like, and how they treat you as a main character.

The gameplay is really alive, with the controls feeling very comfortable, and throughout Bernband I can feel myself interact with the character I am playing as. The atmosphere of the crowed places really brings a little bit of interaction into how these aliens move and act. I can find myself sometimes feeling a connection with the main character, from the way the aliens act and look at me, as well as seeing the aliens personalities shining through from they way they act.

There are not a lot of playable characters, one in fact. I think this game is missing a trick here, seeing as there is a whole host of NPC’s wandering the world, and as there’s no story, it would have fared well if the developer allowed players to choose from a selection on characters to wander around Bernband, just adding to that fun element really. 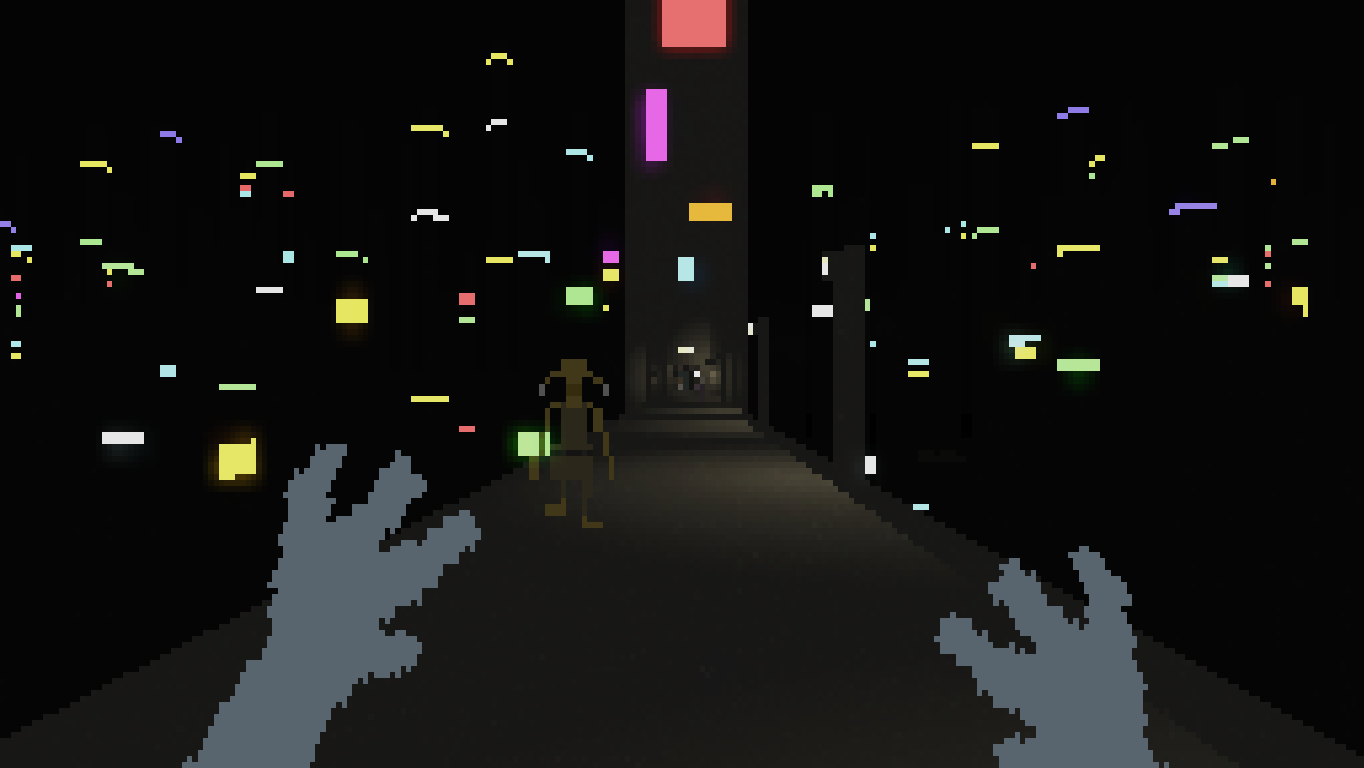 The graphics are okay, although there are sometimes issues with the rendering distance, in that if something is too far you are unable to see it due to the pixel theme going on. For example when I was walking around, I found a room with a hallway which also included a performance on the stage. I couldn’t see who was playing because it was quite blurred and thus was difficult to see what was going on. However the graphics weren’t really an issue everywhere else, it really reminds me of the classics with it looking retro and pixelated. Although having said that, while the games overall theme is pixel built, the shading and lighting is rather new age, and has some wonderful, soft shadows. When you look to the distance you’ll see blocks of colours in the darkness indicating building windows of a busy city.

There is no UI or HUD, only a menu at the launch of the game, showing some options to change the quality and the resolution. It lacks adjusting the audio or the graphics options itself, and there is only a Normal graphics option. As for the audio, it’s actually very good. You can gather what the noises are when you’re near the source, and sometimes the audio can be a bit static and can’t pick up what it is. The audio does sometimes bring out the atmosphere of some places, such as the cafes and the clubs that are around. It really immerses you into the game.

Overall Bernband isn’t really a game made to impress you with amazing, fancy graphics, nor does it boast the greatest audio; it does however succeed in bringing an alien city to life in a way that casual gamers can enjoy. It’s certainly family friendly and both children and adults alike will find comfort in the easy to pick up controls. It’s a well thought through game and certainly a very stylistic walking simulator. I found myself sitting back, relaxing, and just enjoying the journey through Bernband.

You can play Bernband for free by heading over to the Gamejolt page for it.