Minecraft Builders and Biomes is a board game that our children really, really enjoy playing with us. Traveling around the area, flipping over tiles to reveal buildings or monsters, and deciding if you want to fight, build or collect blocks is the basis of the game. You are creating your own world, ensuring that you can earn experience at the end of each round based on your placements.

The Farmer’s Market expansion pack adds a whole bunch of new mechanics, as well as some new characters and cards into your game! This expansion pack is all around villagers, who in the game are able to trade with players to help you gain items you may not have previously been able to craft or get. There isn’t much crafting within the game itself, so gaining these items can change the gameplay loads. 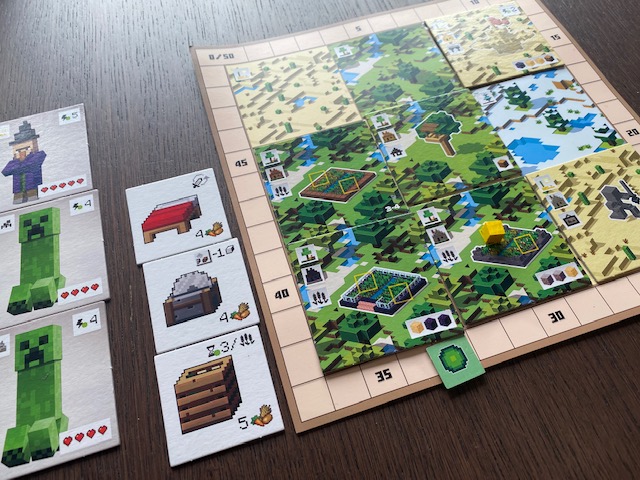 Along with the general world that you create with tiles, the Farmer’s Market expansion adds another board, which has a set of items on it, revealed each round. These items can be purchased using wheat blocks, which are grown on farms. Each player starts with a wheat farm tile that contains two wheat, which replaces one of their grassland biomes on their starting map. This tile is repopulated at the start of each new round — meaning it makes sense to spend your wheat instead of keeping it, as it will not double up when a new round is started, but it will refresh if nothing is there.

Spending your wheat on items then gives you lots of abilities, which can really add a big chaos factor and a big twist to the game. Amelia, for example, started off by getting a weapon from the normal gameplay, then killing off several monsters that she could redeem at times to gain a third action turn as a bonus. She then got an item that stated she could move three spaces instead of two, when deciding to move. This already gave her a big advantage. A further item from the villager’s farmer market then allowed her to get another additional action each time she handed in a monster card: two in total. All of this made her turns very long, very precise, and gave her a huge advantage. 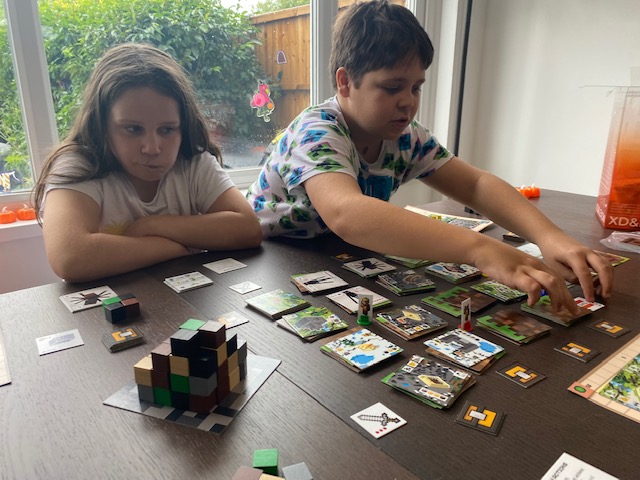 Dann on the other hand collected items that added bonuses whenever he moved. If he killed an enemy, he got a bonus experience. If he got any form of experience, he got a bonus experience. It meant that we watched his experience quickly tick around the board, gaining more and more as time went on. Kai and I didn’t seem to use the wheat farms as much as the other players, but I ended up getting a card that let me fight a mob a second time if I did lose, which did help me in the long run! Kai was building primarily, and moving around the board, trying to get points for the long game.

This expansion was primarily focused on mechanics, replacing a few of the default instructions-based cards that came with Minecraft Builders and Biomes. The card which stated what types of builds you get points for when connected now is replaced with a card that includes the farm symbol, wheat farms are added into the tile deck, another card which explains all your options for turns now includes trading at the farmer market, and there are a few new character skins that you can play as. 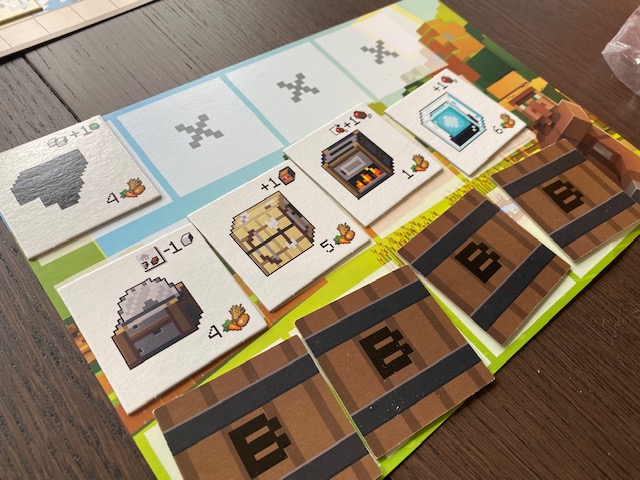 Having an expansion that focuses primarily on adding new mechanics really does refresh a game. This amount of chaos and strategy, placed directly into the game, makes it really, really fun. It’s such a simple idea, but fits in so well with the concept of Minecraft and with the gameplay itself.

The only real downside I found with the Farmer’s Market Expansion is that the new tiles are lighter in color then the rest of the box, which means they do stick out and sometimes it’s hard to tell what exact characteristics there is for scoring at the end, on the farm, but I feel this might just be something to do with the print we got.

You can find Minecraft: Farmer’s Market Expansion on Amazon.