I honestly don’t know any videogame fan of a similar age to me that doesn’t have fond memories of Bullfrog’s Theme Park. Even though Rollercoaster Tycoon and, more recently, Planet Coaster have since picked up the mantle, there was something fiendishly simple about Peter Molyneux’s classic. I mention this because Meeple Land — a board game from Blue Orange — captures the feel of Theme Park almost perfectly.

In case you haven’t guessed then, Meeple Land is a game about building a theme park. Or rather, more specifically, it’s about competing with your neighbours to build the very best theme park. The titular Meeples will also need to be brought in, generating money and points, whilst the general variety of attractions your theme park has is also a measure of success.

Meeple Land keeps its mechanical gameplay simple, but don’t let that fool you — it has a fiendish scoring mechanism that just about elevates it from “very casual” to something on the lighter end of “mid-weight”. Each player will need a score sheet, and as the game goes one they will literally mark off the elements added to their park. There are four kinds of visitors worth either one or two points each, and guests who arrive at your park but can’t get in will cost you points — more on that later. 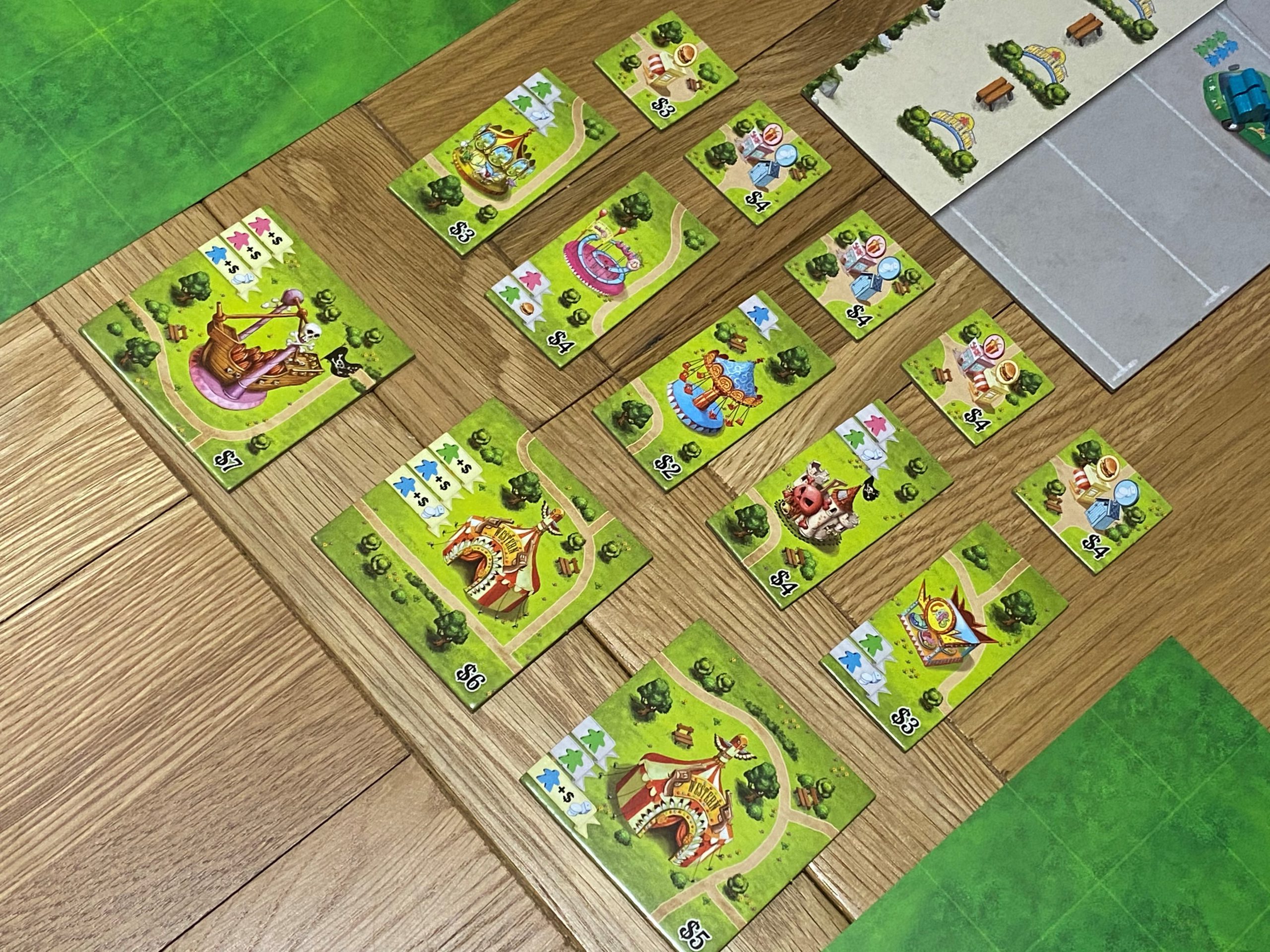 Setup for Meeple Land is logical and simple. The players begin by placing a “coach park” tile and then drawing a coach for each player plus one. Onto these coach cards, the players will place the number and colour of meeples shown, indicating what a player will receive if that coach should later arrive at their park.

The players will also place five face up “one space” tiles (including fountains and amenities like toilets, food and gift stalls) and five face up “two space” tiles, each containing less impressive rides. Finally, three “four space” square attractions will be drawn, and these represent the real killer attractions that any park will want to have. 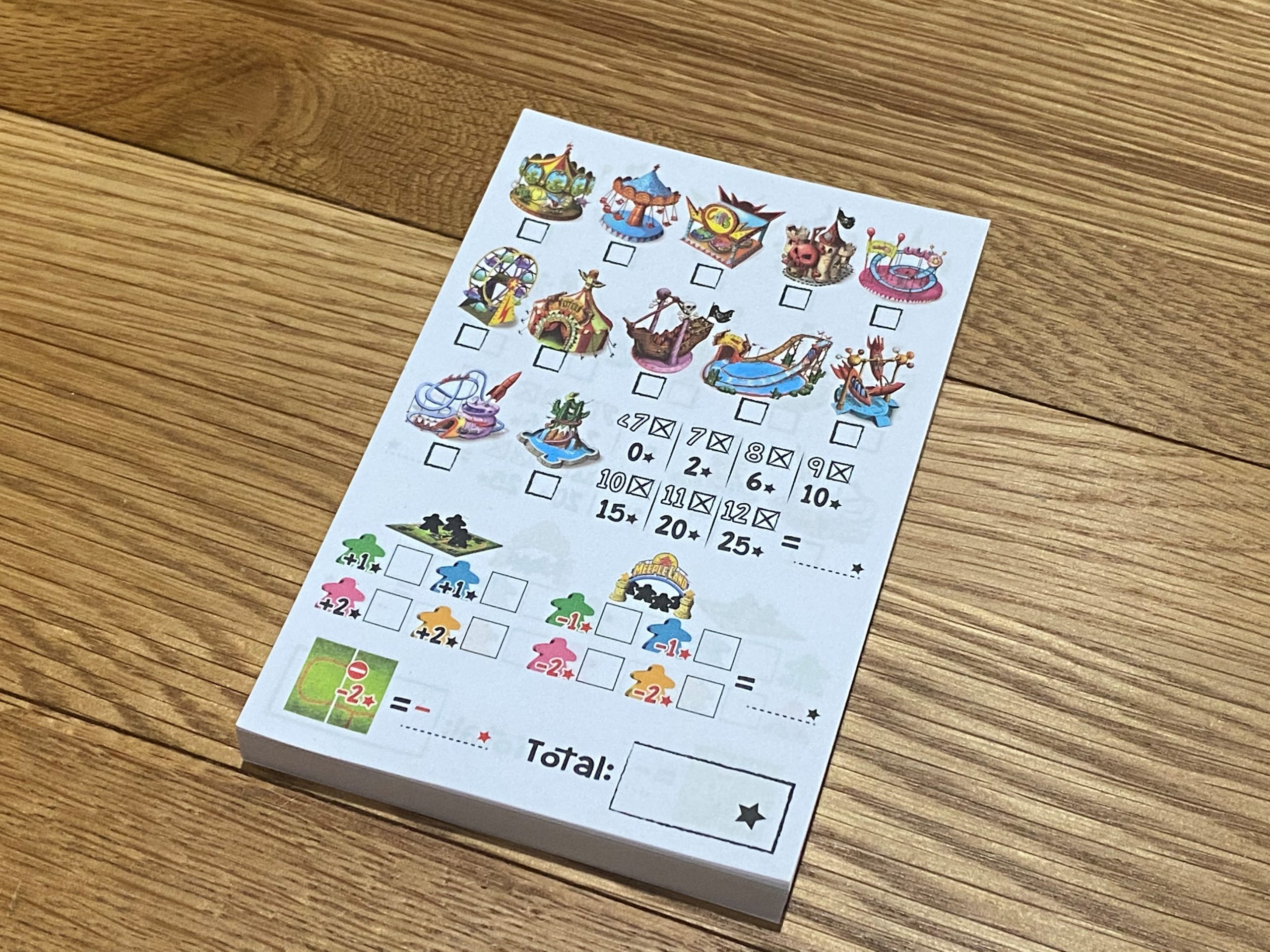 The players each take one park board — which is actually a disappointingly flimsy thing — and a park entrance stand that is placed across the one space on their board that will be marked — with a pathway. Players then take fifteen coins (as indicated by the first round token on the coach park board) and then one additional coin for their position in turn order (one for second, two for third, three for fourth).

With this done, the first player will then begin the game by taking an action — of which there are three. Players may buy a tile (by paying the amount shown on the tile they want, then placing the tile on their board, then replenishing the tiles.) They may market their park to visitors, which means they pay two coins, take the first face down tile from the “one space” tiles and then gain the meeples shown on it (always two) to their park entrance. Or finally, they may pass, ending their involvement in this round and allowing them to choose from one of the available coaches. 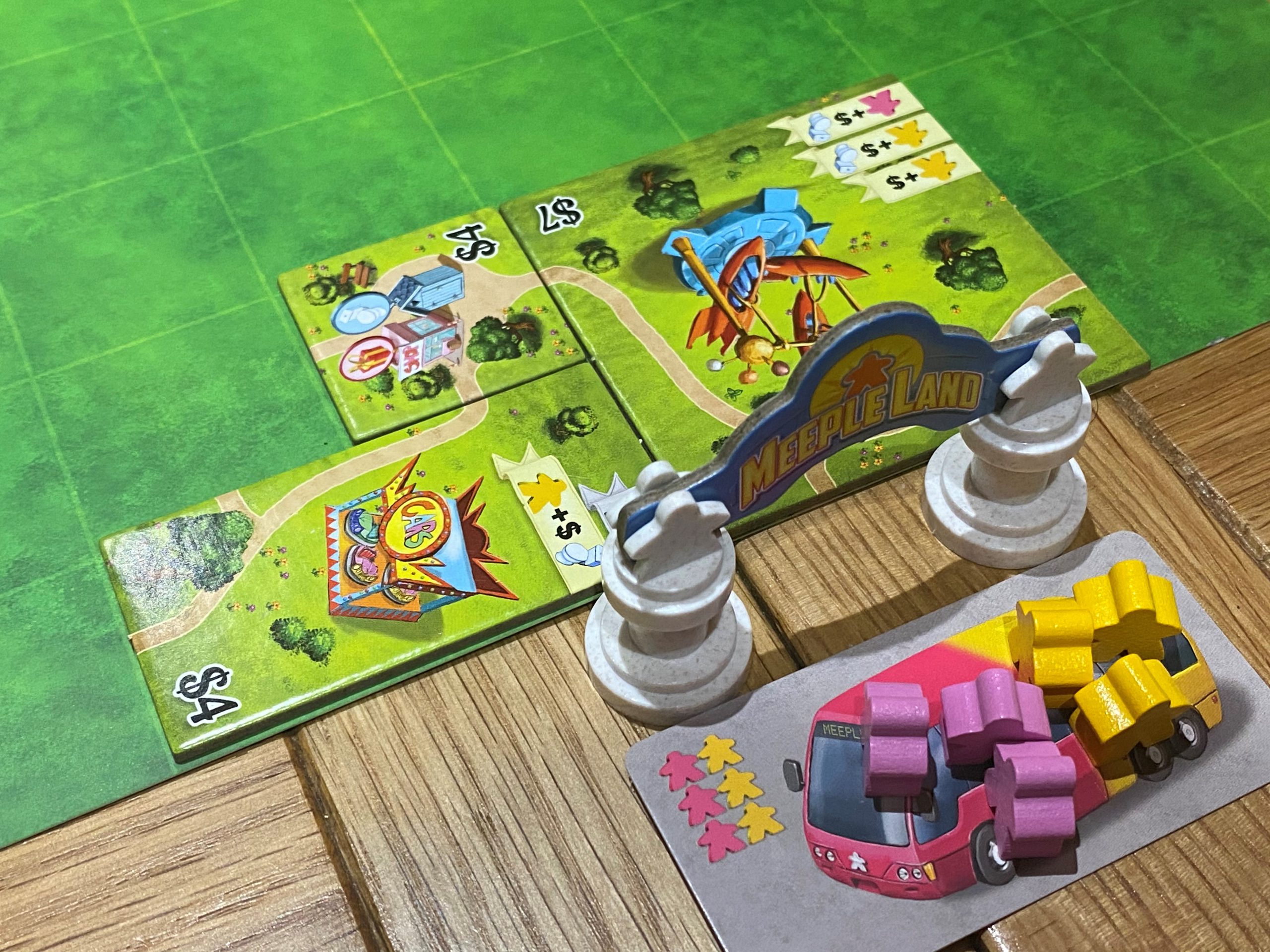 Once all players have taken as many turns to place tiles and market as they wish (or can afford) and have passed, everyone should have claimed a coach and can now add the meeples it brought to their park entrance. Meeples at a park entrance can be placed (at any time from now on) onto a matching attraction space — for example a green meeple could move to a green meeple space on a ride, or they could even move freely between green spaces on different rides at any time.

The next player will also be decided before the next round, and the player who has the least money at the end of the previous round will become the first player for the next round. The next round will then begin, with each player drawing money from the bank as shown on the round (it was fifteen during the first round, but it then drops to ten, then five, then none in rounds two, three and four). 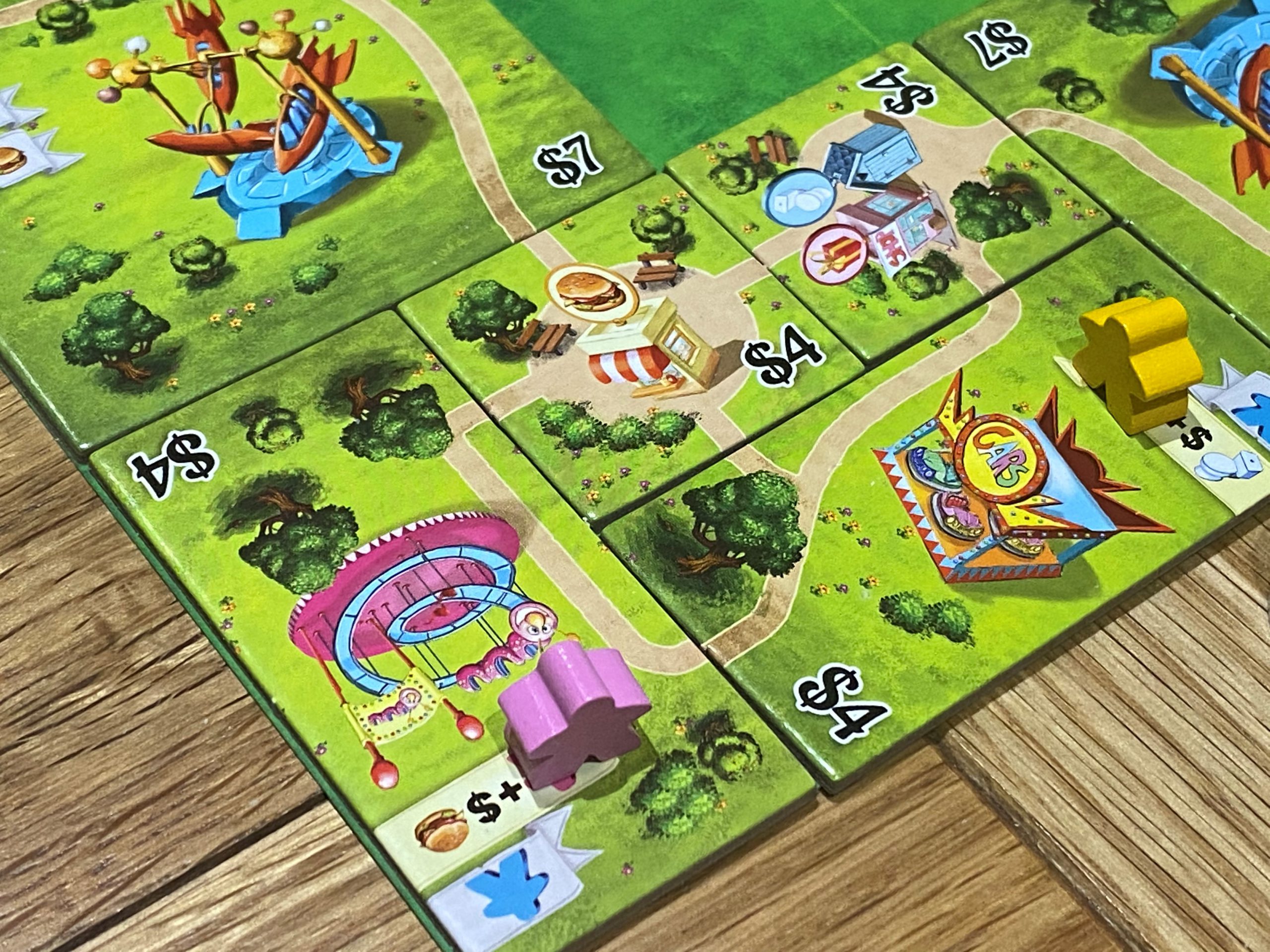 The players will also now draw revenue for each meeple in their park, with every little wooden person generating a coin each. It goes without saying, but meeples standing at the entrance that have not (or more likely cannot) be placed earning nothing. Some meeples also generate additional income (as indicated by a dollar sign beside them) whilst others can only be placed if a player can meet their specific requirement.

With regards to this latter point, I should mention the rules for placement in Meeple Land, at least briefly. A tile can be placed anywhere, as long as it is connected to one other tile by at least one path, so that at least one continuous route from the park entrance can be traced to all tiles in the park. For meeples with special requirements (like food or gift symbols) a tile that provides that requirement must be placed directly adjacent to the tile on which that meeple sits. 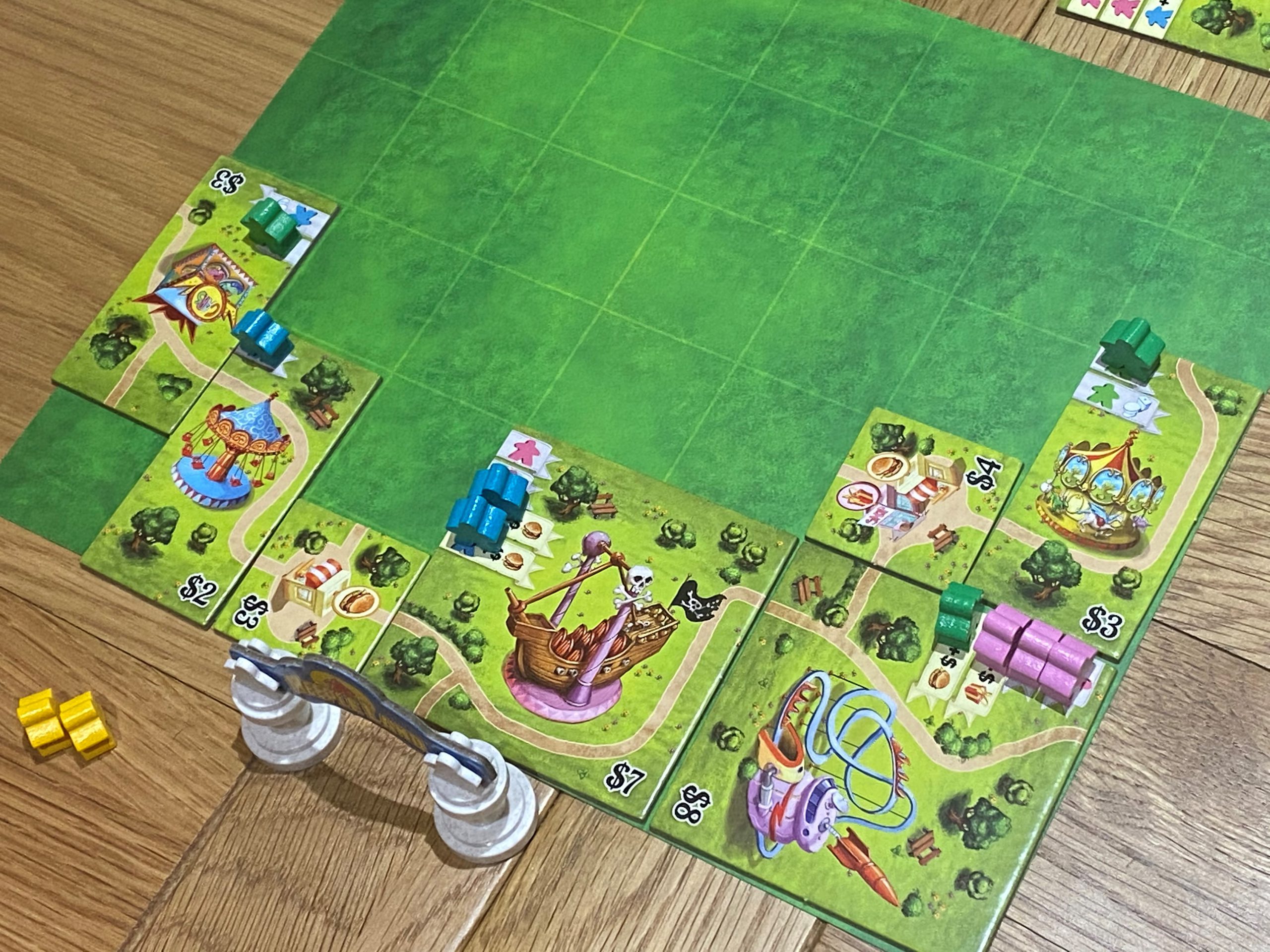 For example, if you have a blue meeple that wants food on a Pirate Ship ride tile, then in order to actually place that meeple, you’d need a food tile placed directly beside the Pirate Ship, with a connected path. As any Meeple Land player comes to learn, there are powerful tiles, then there are tiles that offer lots of versatile paths, and then there are the really excellent few tiles that do both — these are highly prioritised whenever they appear.

Of course when it comes to scoring, all of these different rules begin to add up, and this is where Meeple Land is lifted above the kind of simplistic tile placement games that its mechanics suggest it should sit amongst. For starters, you’ll add up all of your large attractions — the more unique rides you have, the more you’ll score. Then you’ll add up the meeples in your park — yellow and pink are worth two points, whilst blue and green just one. These same meeples are worth negative points of the same value if they are at your gate but cannot be placed. Finally, you’ll lose a point for every road that does not connect to another valid tile. 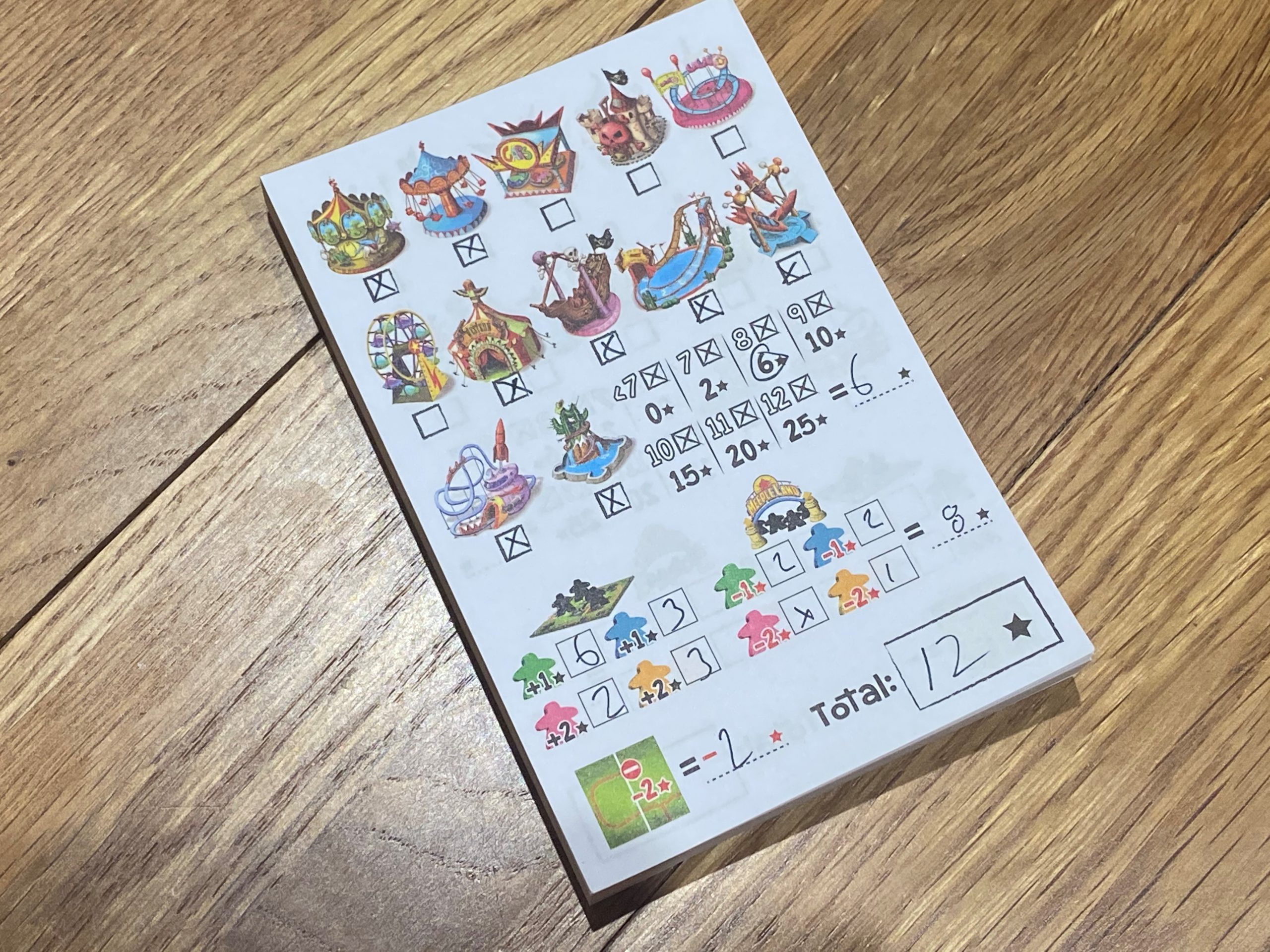 Meeple Land is a low scoring game at first, because even more than many games of its kind, it takes time to optimise your way of playing. The game includes one “small” expansion board and a secondary entrance for each player, and during my first few games, I never needed these — but as we played more, we learned how to use these to really go big on large attractions, or to allow us to build outwards confidently when in earlier plays, we had felt that a compact, interwoven park would be most efficient.

Of course, as we got better at the game, we also found that we were capable of generating more revenue, and this means that the more you have to spend, the more your placement of tiles comes under the spotlight. I really enjoyed how Meeple Land seemed to begin quite simply and innocently, but the more I learned about it, the more it seemed to offer me — just as Theme Park had back in the 1990’s!

Meeple Land lands in a congested space on my shelf, because tile placement has become a popular genre in the last year or two. With that said, I find it deceptively interesting compared to many peers, and I really like the simple mechanics matched to unexpectedly deep long term gameplay. Overall, this is a game that I’d recommend any casual or hobby gamer checks out, with perhaps the only downside being that player interaction is at the bare minimum here, with only the choice of coaches and tiles affecting anyone beside yourself each turn.

You can find Meeple Land on Amazon.