Grungy cyberpunk, espionage and patience combine together in Mechajammer, the next title from Serpent in the Staglands developer Whalenought Studios.

Mechajammer is a lot of things, and while, at its core, it’s an open-world game set in the moody dystopia of 80s action movies like Johnny Pneumonic and Escape from New York, it’s also a game that’s incredibly hard to talk about without drawing comparisons to other media forms or games. There’s a reason for that. Mechajammer feels like a transfusion of genre traditions; strong elements from cRPGs like Fallout fused together with immersive sims like Deus Ex… and, that’s even before you get talking about the setting.

Its world is a jungle outworld turned into an urban jungle, with all of the problems that come with it. Society is decrepit and collapsing, with nature’s muddy browns and greens eating away at chunks of the grungy, brutal city sprawl. Roads are cracked and clearly not maintained, and there are burning barrels liberally littered around. Electronics, Robotics and Mechanics all exist and fill the world, but it’s like an 80s view of a broken future; Cement complexes defended by vaguely human-shaped robots; tuk-tuks, dune buggies, and caged choppers are how you get around; and dusty looking revolvers are the sidearms of choice. Mercenaries weld weapons and machinery to their limbs because in Mechajammer the body is just a tool to survive another month, week or day on the planet.

But, and perhaps in keeping with the John Carpenter movie that’s been cited as a major inspiration, your character doesn’t want to survive, they want to escape, or even thrive, and that’s not going to be easy considering the world is practically tearing itself apart. Calitana is crawling with drug dens, gang territory and syndicates, but it’s also filled with citizens. Most of these don’t want anything to do with the chaos, but others are tied up to the gangs and factions that are at play throughout the world, and if you keep tipping the balance then they, themselves, will start to bind together and try to defend what little freedoms and way of life they have. It’s a city at boiling point.

Now, at this point — if not for all the comparisons — Mechajammer might sound a little familiar. It certainly did to me, but I couldn’t quite put my finger on what it was because it also looked different than what was tugging at my memory. Copper Dreams was Kickstarted many, many years back. In fact, I actually wrote about it back when I thought Steam Greenlight was one of the coolest things in games. It hit a lot of the same notes, however rather than the scruffy, scratchy pixel artstyle that it currently has, Copper Dreams looked like it was channelling the mid-late Playstation (1) era low-poly design we saw in Tomb Raider, Vagrant Story and Metal Gear Solid. It also had a more industrial vibe to it, looking like an isometric twist on the latter, albeit with a lot of the immersive sim mod-cons and the same cool turn-taking turn-based gameplay that persists in Mechajammer. 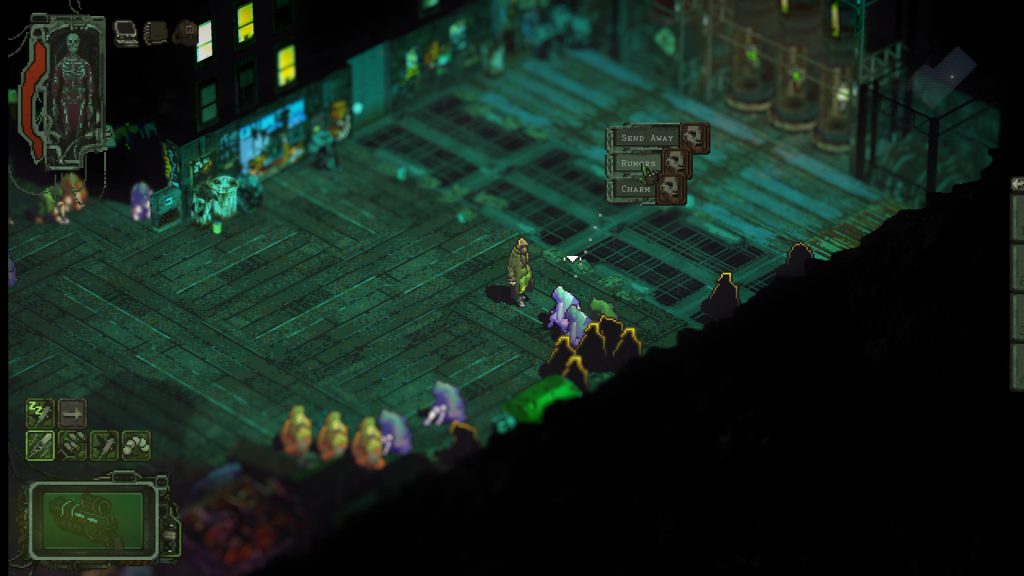 That turn-taking, turn-based gameplay is one of the major actual play elements that have stuck out to me through the gameplay. In practice, everything in the game follows the same turn system, but during combat, the movement slows down to give you more time to think. If you take lots of small, low-effort actions then you can outwit or outmanoeuvre enemies, however, if you spend a lot of time delicately aiming at enemies, or firing large bursts of weapons, then you might well find yourselves overwhelmed while your attention is elsewhere. This only gets better when you start adding others to your party.

While at times, especially if you look at its character screens with their dice, Mechajammer appears to be running like a classic cRPG, your allies in combat are very hands-off. You can give each of them equipment, and even check their skills and give instructions through conversation, but when it comes to combat they’re on their own, and although you can give some vague movement directions, if you rush into a situation then you can very quickly end up the only one in your posse left alive and kicking.

That’s because, based on the demos that I’ve played through, the odds are always stacked against you and so evasive, or stealth, techniques are much more rewarding if you can pull them off. Enemies can hear you, and they can see you too, so patience is key. You do get a chance to peek at their cone of sight, and there’s normally plenty of shadows or bushes to hide in, but you’re almost always under-equipped, which makes a successful run at stealth in  Mechajammer feel as intense as when you try to pull off a passive run in Dishonored, or a Silent Assassin ranking in Hitman. 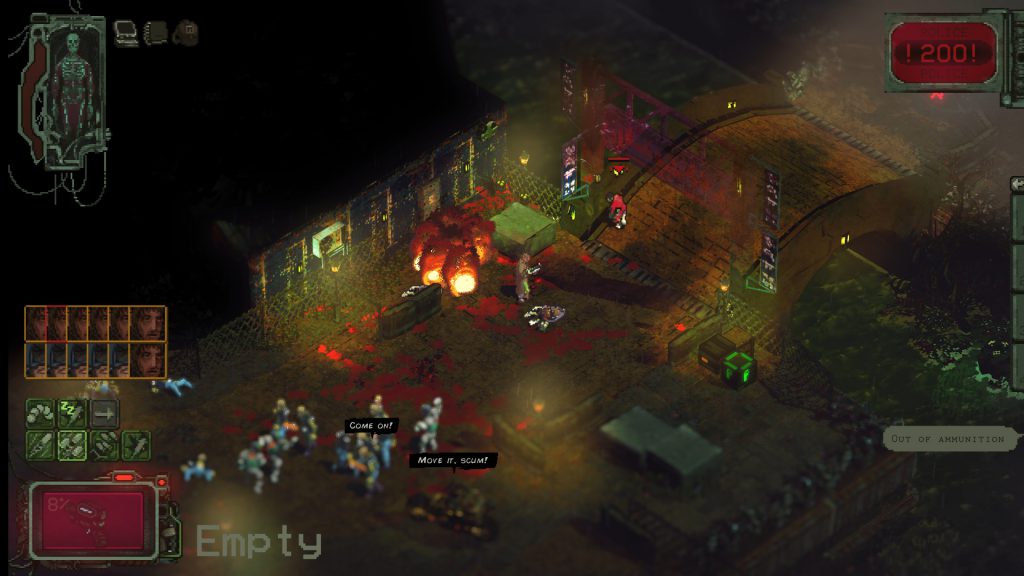 But, but, those games are immersive sims. You always start them as the same character and then you upgrade your tools (be that run-starting equipment in Hitman, or abilities in Dishonored) as you progress. Mechajammer is a pen-and-paper RPG at heart, a stats and dice-roll based sandbox with the chaos that comes with each of those options. This is what makes pushing forward thrilling, but also incredibly, incredibly unforgiving.

Your character, which you’ll be able to go through full character creation for in the full game, has a series of ‘Studies’ and ‘Virtues’. These are your skills and perks and cover everything from burglary to specific weapon types. Some of these are point-based, while others you assign dice to, increasing your maximum threshold in a fashion similar to a game of D&D. These are always tricky to balance in game design — I’m sure more than a few people have experiences of pouring points into skills that simply haven’t turned up often in the game. I’ve not seen enough of Mechajammer to know how this compares… although its grungy cityscape will hopefully offer plenty of chances to pilfer and steal rather than just sneak or shoot. 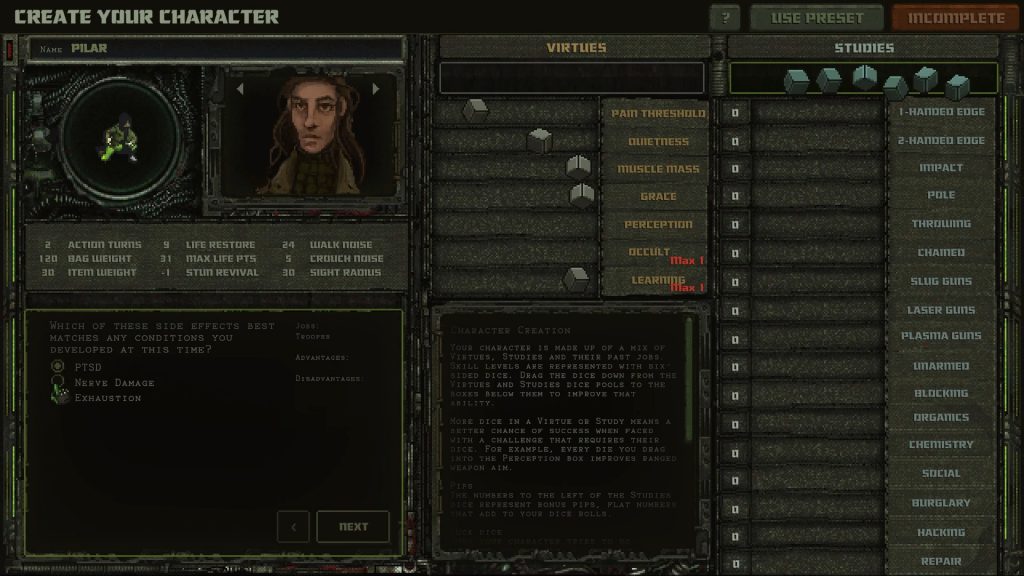 Despite how much we already know, and have seen about Calitana, it’s clear that we’ve not seen scratched the surface of the world. Its grungy cyberpunk makes me think of how, in my youth, I played Shadowrun and Syndicate on the SNES and wished for deeper, more chaotic worlds… and frankly, I’m really excited for it.

Mechajammer is being developed for PC, Mac and Linux, you can find out more about it on its official site.