Games based on the stories of H.P. Lovecraft have become increasingly common in recent years. Some of these games are based directly on Lovecraft’s works, whereas others borrow characters and aesthetics, but do not bother with the dread induced by the cold, uncaring cosmos we live in. Lovecraft’s Untold Stories, currently in early access, falls somewhere in the middle.

Lovecraft’s Untold Stories, from LLC Blini Games,  is a top-down action game that does not hide its arcade-like character. Your protagonist is a private eye equipped with a shotgun and unlimited ammunition. A good portion of your playtime will be spent blasting cultists and other, less human horrors with it — unless you prefer to use dynamite, grenades or Molotov cocktails. 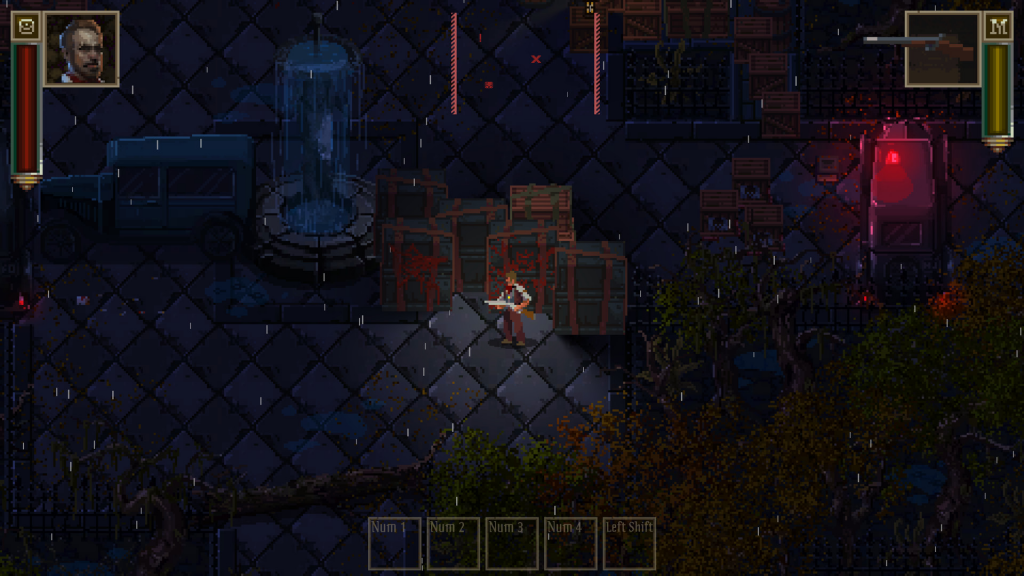 That said, Lovecraft’s Untold Stories does have elements of survival horror. Your protagonist is somewhat fragile, exploring levels thoroughly to find items is encouraged, and your limited inventory space has to be managed carefully. Death comes upon you swiftly and sends you back to the last checkpoint. Said checkpoints are sometimes placed quite sparsely and can lead to even more frustration.

Lovecraft’s Untold Stories can be quite difficult. Your main character is as brittle as the opposition. At times you can walk into a room and dispatch every bad guy without getting so much as a scratch, but another time, a slow reaction or spate of bad luck can kill you within seconds. The first level, an old mansion, is especially unforgiving. The later stages — among them a hospital and mysterious caverns — are a lot easier by comparison.

On top of regular spikes in difficulty when it comes to the enemy-filled rooms, Lovecraft’s Untold Stories also features randomly generated rooms. Generally a nice idea that increases the game’s replay value and draws the attention of roguelike connoisseurs, the random rooms sometimes throw the game balance completely out of the window. One playthrough can be blessed with easily accessible items and fair enemy placement, whereas the next one throws you straight into the meat grinder. 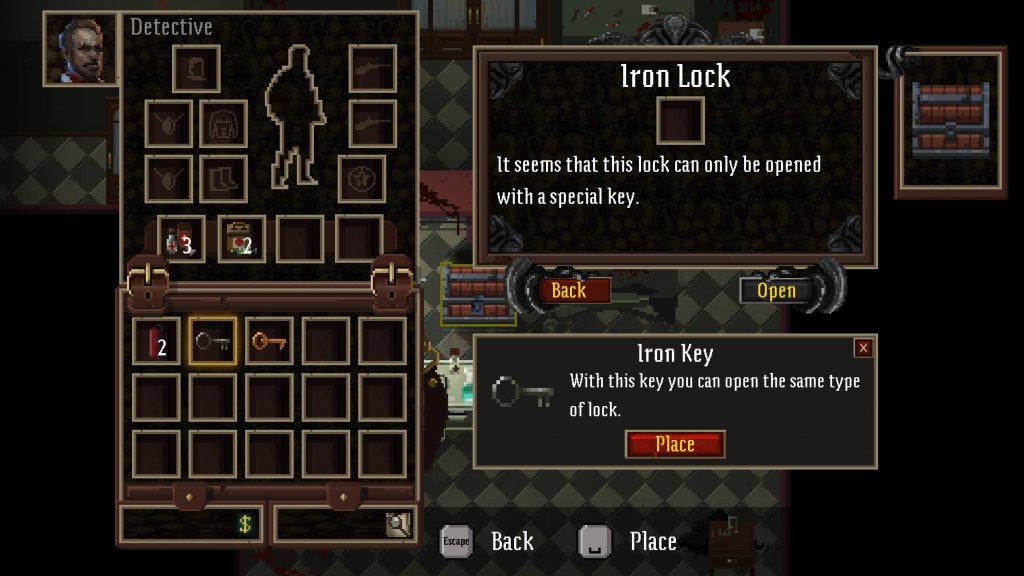 The random nature of Lovecraft’s Untold Stories leads to levels that looks a little bit like a patchwork. Nevertheless, the game is nice to look at and has enough objects and furniture to keep the graphical variety up. Lovecraft’s Untold Stories is presented with 16-bit aesthetics, even though it does use filters and effects from a later era of video-game design. It does not shy away from using some colours and avoids being yet another realistically brown horror game.

Unfortunately, certain interface elements and some of the text use a different resolution to everything else and clash with the game’s general look. Zooming in and out is possible, but only in some areas. Whether this is a bug or feature remains to be seen.

Less convincing is the plot of Lovecraft’s Untold Stories. The story unfolds itself primarily through text and the occasional clue found in a level. It is a fairly standard 1920s investigative horror story. This may sound like an exaggeration, but at this point, Lovecraftian games are plentiful enough for this to be little more than a mix between established plot elements and genre conventions. 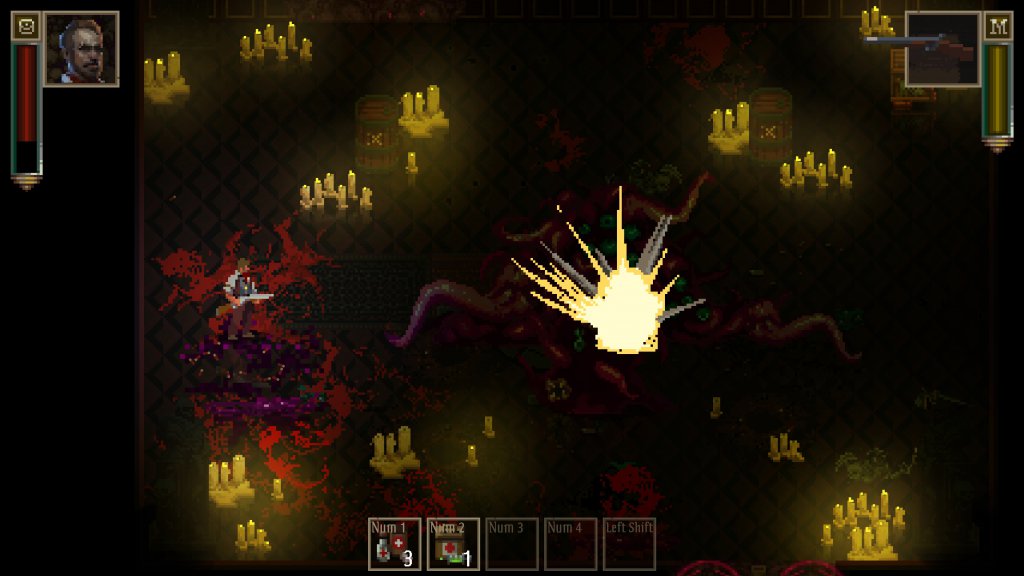 More interesting are the characters. You always start with the shotgun-wielding detective, but you can unlock three more characters once you meet them over the course of the game. Each has slightly different abilities. The detective is the most physical character — he has no problem smashing crates and doing aesthetically pleasing rolls over obstacles, but is less savvy when it comes to arcane knowledge compared to the next character, a slightly mad doctor with a weaponised alien artefact.

Two more characters, as well as the final three stages, have not been made available yet. The promise of more to come is there; when examining certain objects, playing as a certain character sometimes gives you additional dialogue options. While not exactly a game changer, it is nice to see different characters reacting to events in a way that reflects their personality.

Despite its presentation, Lovecraft’s Untold Stories is not a horror game, or at least not a game meant to invoke feelings of horror. It is most certainly horror-themed, but it’s not going to be the next Clock Tower. The Lovecraftian elements are present right from the start — with cultists quickly being joined by bug people, colourful ooze monsters and other extradimensional nasties — but are once more present only as a theme. Sometimes they even give the impression that this is based on the Arkham Horror board game series more than anything else. 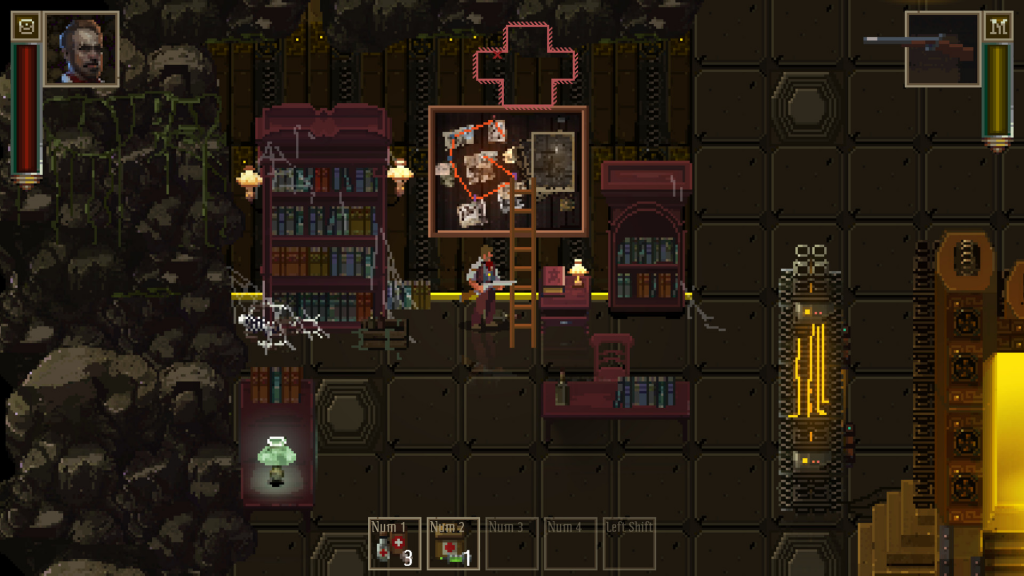