When I think of movies like Indiana Jones and the Temple of Doom or The Mummy, I tend to be drawn towards the swashbuckling elements of those movies, and the protracted and exciting action scenes. The fantastical archaeological and historical settings add to the excitement, as does the spirit of exploration and discovery. In Lost Ruins of Arnak, players will explore these ideas through worker placement and deck-building, but how well does the game capture the spirit of the movies that inspire it?

The first thing you’ll notice about Lost Ruins of Arnak is that it has ridiculous production value, and the sheer number of components will hint at a much more complicated game than you’ll actually find here. There is a huge board that unusually runs top to bottom and then a second, smaller board that houses resources to place beneath it. 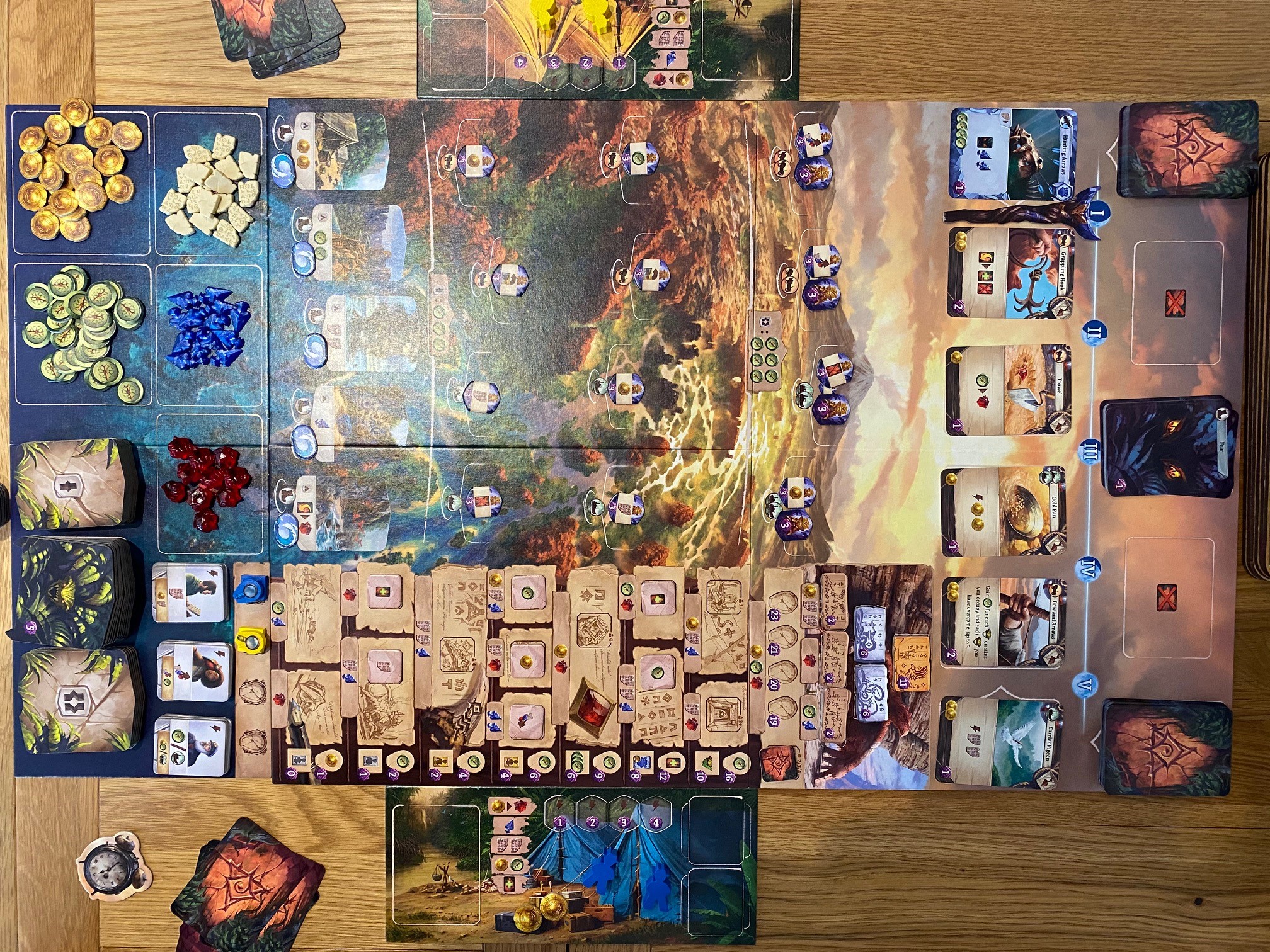 There are four player boards that have useful spaces to remind the players of a few of the things they can do, and then there are five different resources (money, compasses, arrowheads, gems and tablets) in various combinations of card and plastic. There are level one and level two ruins tiles, guardian tiles, player pieces in four colours, and then decks of cards for artifacts and items, as well as fear. The players each get a pre-built deck of cards to begin the game with.

A few other components including a beautifully simple set of tokens that drive the single-player mode make up the rest of the box, and there is a manual that has been superbly compiled and edited. There are a few handfuls of smaller bonus tokens that will be placed on research tracks and ruins around the board, but in terms of material content, it feels like there’s an awful lot in the larger than average box. 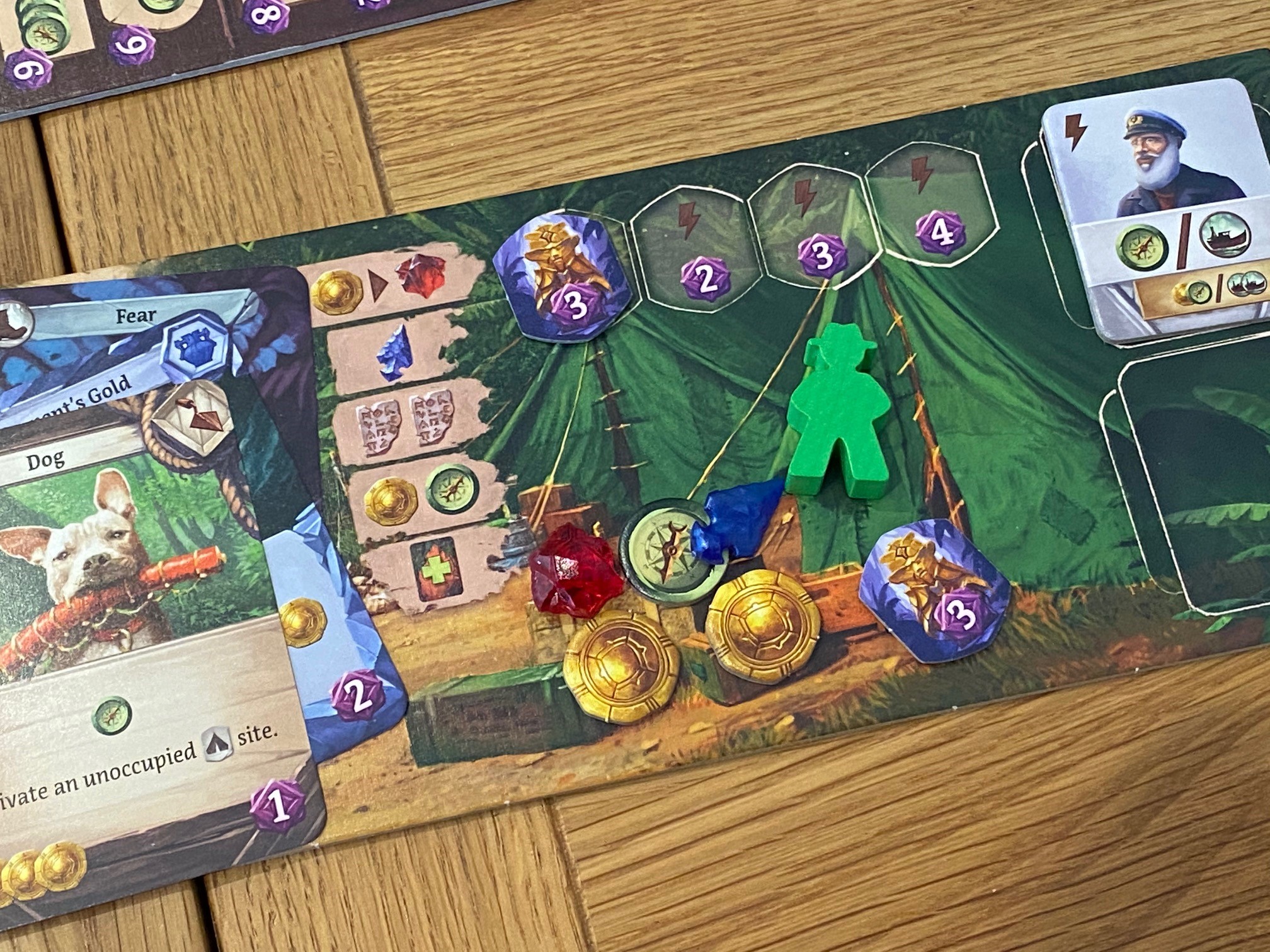 Setup brings the first sign that Lost Ruins of Arnak isn’t as unapproachable as it seems, with every piece either having its own obvious home on the board or player mat or being placed in a nearby pile with minimal sorting and shuffling. There’s none of the kind of “take this pile and cut it twice, then add something else” kind of overhead, and the setup can be entirely memorised after just one or two games.

The gameplay is similarly straightforward for anyone who understands games in general. Lost Ruins of Arnak has the advantage of being “very familiar” in terms of gameplay mechanics, whilst perhaps also bearing the burden that it does next to nothing that is unique in its own right. The winner is always the player who scores the most points across all sources, and so whilst there are numerous thematic elements to entice players, Lost Ruins of Arnak is a pretty cold, hard race to build the most efficient points engine. 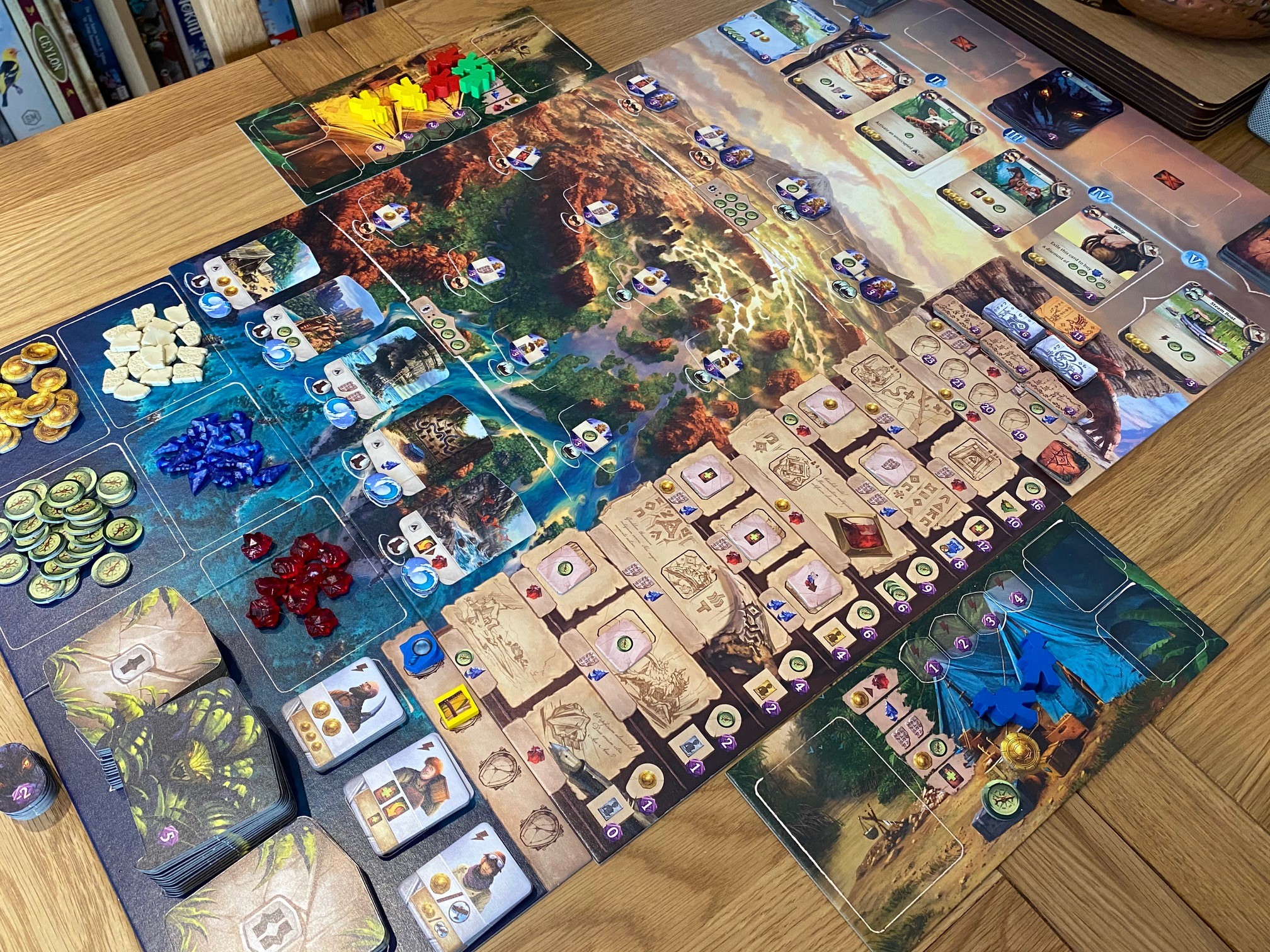 And how do you do this? Well, through a novel mixture of worker (archaeologist) placement and deckbuilding, of course. These two mechanics together give the players access to an increasing number of actions on each turn, and one particularly interesting thing about Lost Ruins of Arnak is that this happens without ever-increasing the number of workers. Instead, the cards that you add to your hand will add actions of their own, as well as occasional “free” actions, that simply allow you to take resources or do something you might not otherwise be able to —like defeat a guardian.

Through the use of these actions, players will gather the five kinds of resources and use them to move further and further up the board —thematically delving deeper and deeper into the jungles and ruins that make up the world of Lost Ruins of Arnak. There’s a research track to work up that offers powerful benefits like assistant tiles (which can then be upgraded and will offer additional actions) and as new ruins are discovered, they are added to the board to create new worker placement slots. 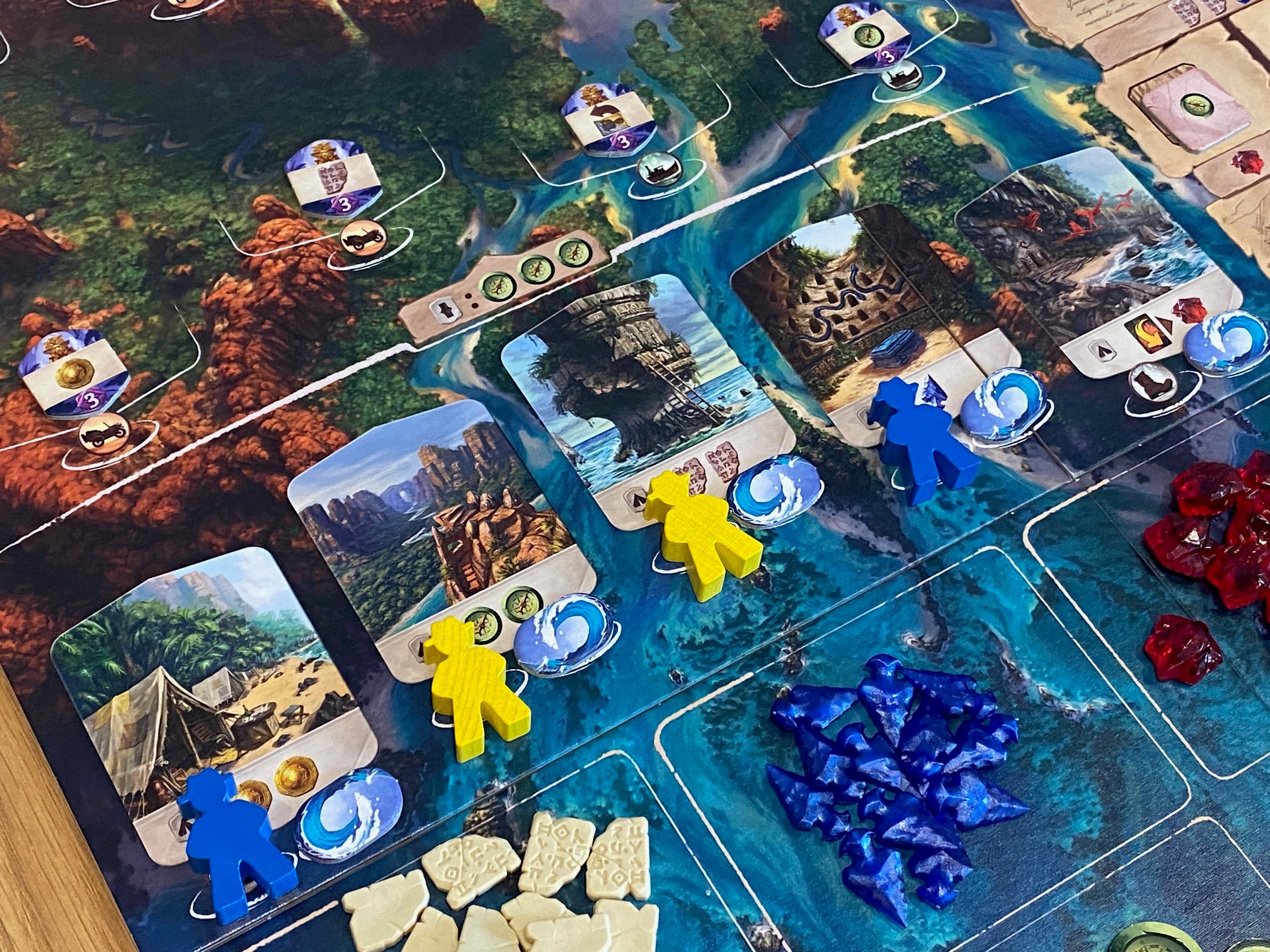 Players are free to buy cards as an action, and as each game round passes, the number of item cards in the market (regular things like guns, dogs or ropes) will decrease and the number of artifacts (signifying the general unearthing of relics as time passes) will increase. Players can pay for items in gold, and artifacts in compasses. The difference is that items must be bought and placed in your draw deck, whilst artifacts give their benefit immediately and are then placed in the discard pile.

Each round (of which there are five) is, therefore, a delicate balance between doing as many actions as possible and making those actions impactful. As in many deckbuilding games, players will spend much of their first-round adding to their deck and increasing their supply of tokens, doing little to score points besides those on the objects acquired. This swings wildly the other way by round four or five though, with players then using effects to thin their deck (discard weak cards permanently) and focussing on the next opportunity to score points. 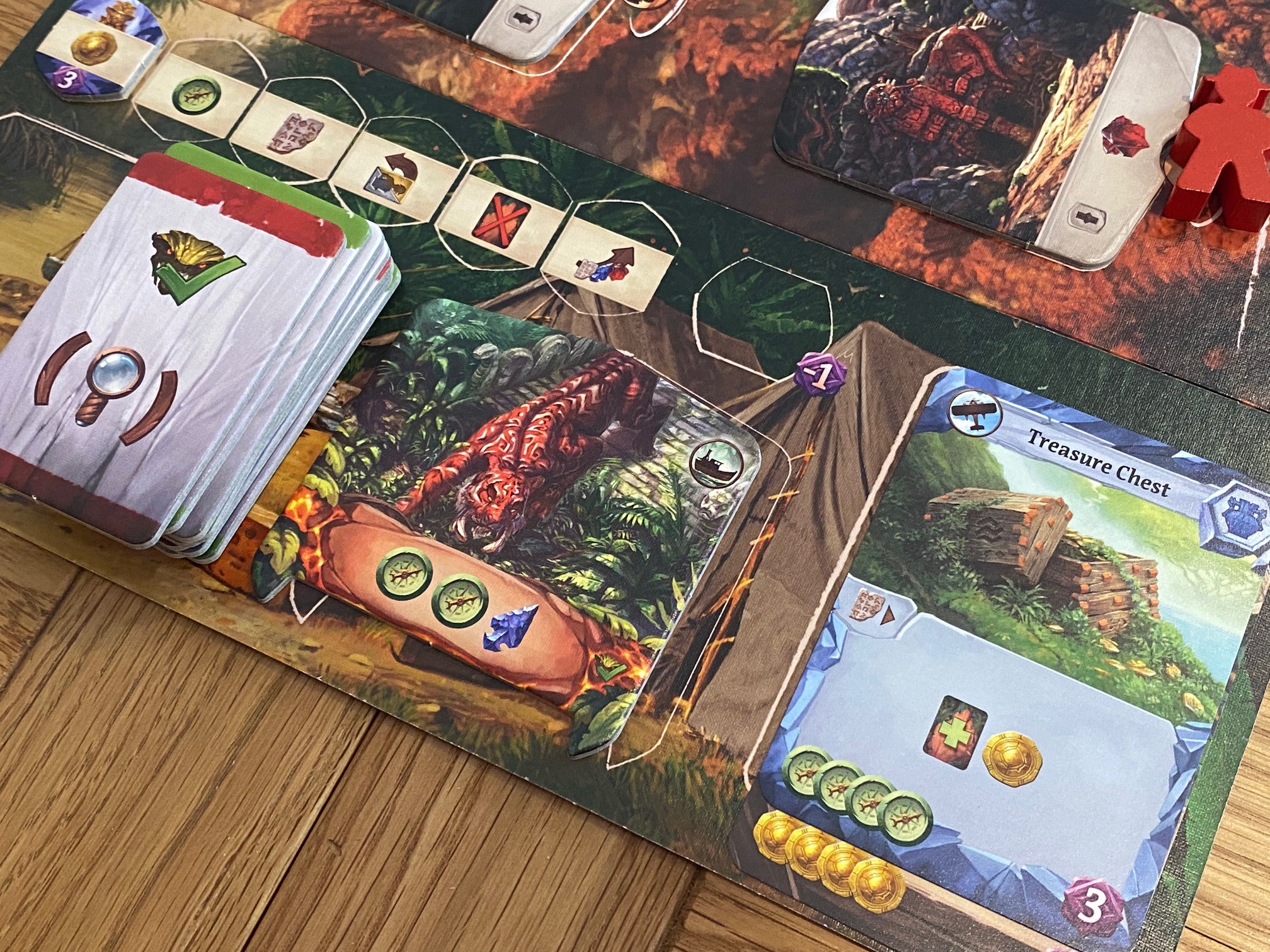 One thing I haven’t mentioned yet is that each new location (which must be travelled to at a cost of boots, boats or aeroplanes, which can be paid in cards) will spawn a guardian when first visited. These guardians don’t do anything except cause the player to take a fear card if still present at the end of the round. On the other hand, if a player can pay the right resources (or use a card showing the right symbol) a guardian can be defeated, bestowing its boon on the player and ultimately being worth five points.

It is actually this relatively “passive” stance from guardians that makes Lost Ruins of Arnak feel very much like the euro game it is, rather than, say, an action or combat game. Defeating guardians is literally transactional —you simply trade some stuff in, just as you would to fulfill a contract in any other game. There is no element of skill, randomness or the unknown —and the penalty of taking a fear card is close to negligible. 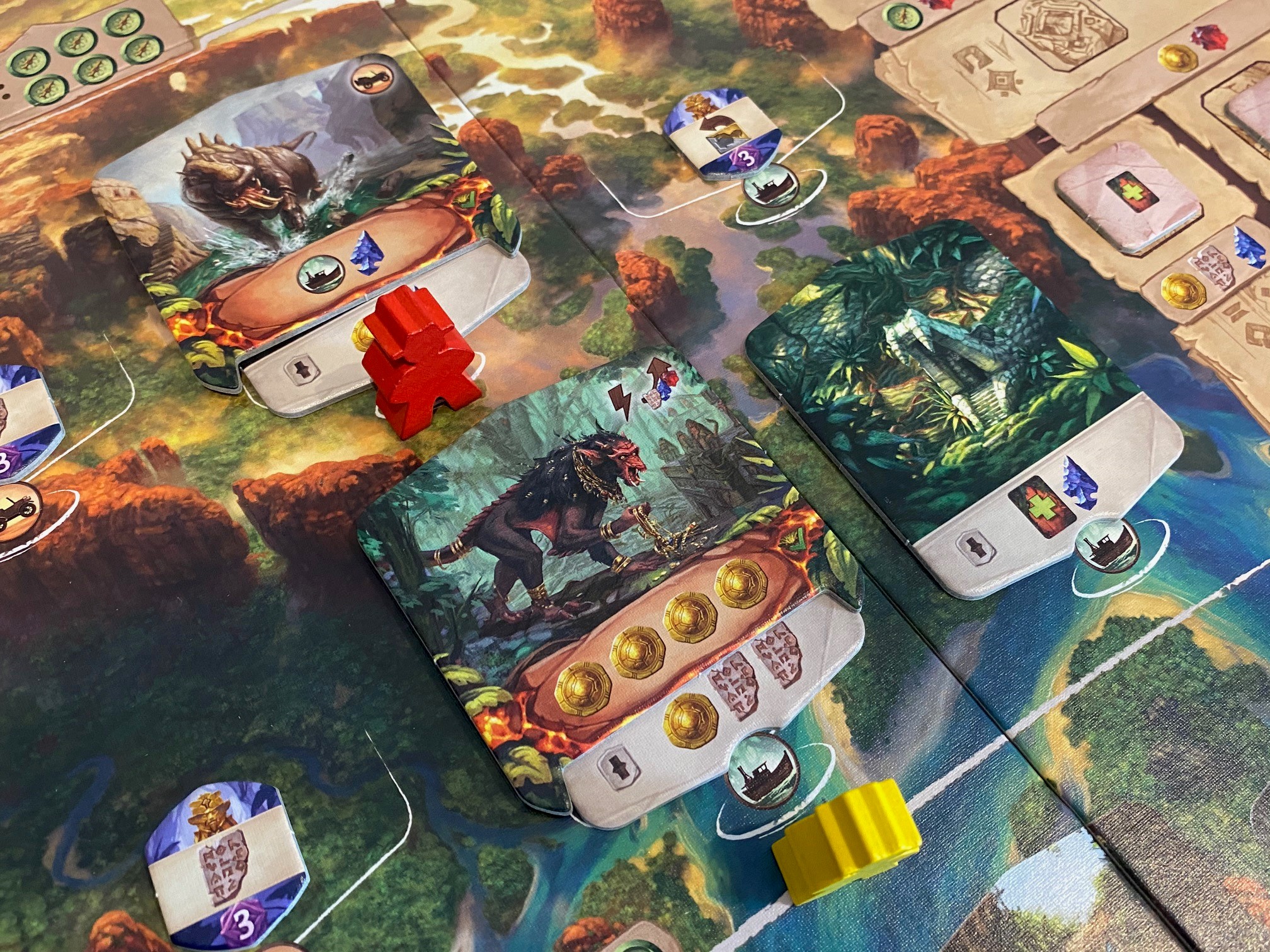 I do think it’s a shame that Lost Ruins of Arnak fails to capture the sense of danger and excitement that one associates with the tomb raiding, trap dodging theme. Having said that, I don’t mean to suggest that the theme doesn’t work, or even that it is lacking because that’s not the case. Lost Ruins of Arnak simply lacks any kind of peril.

That is more than made up for by the many, many things it does well. Firstly, I still love the theme —primarily because of how beautifully it is presented, and because it links very well to the card market and how the board builds with new ruins round after round. These mechanics in themselves are also very likeable, with new options constantly appearing —the only downside to this being that what begins as a very tight board soon becomes quite open, as long as you can pay the travel costs. 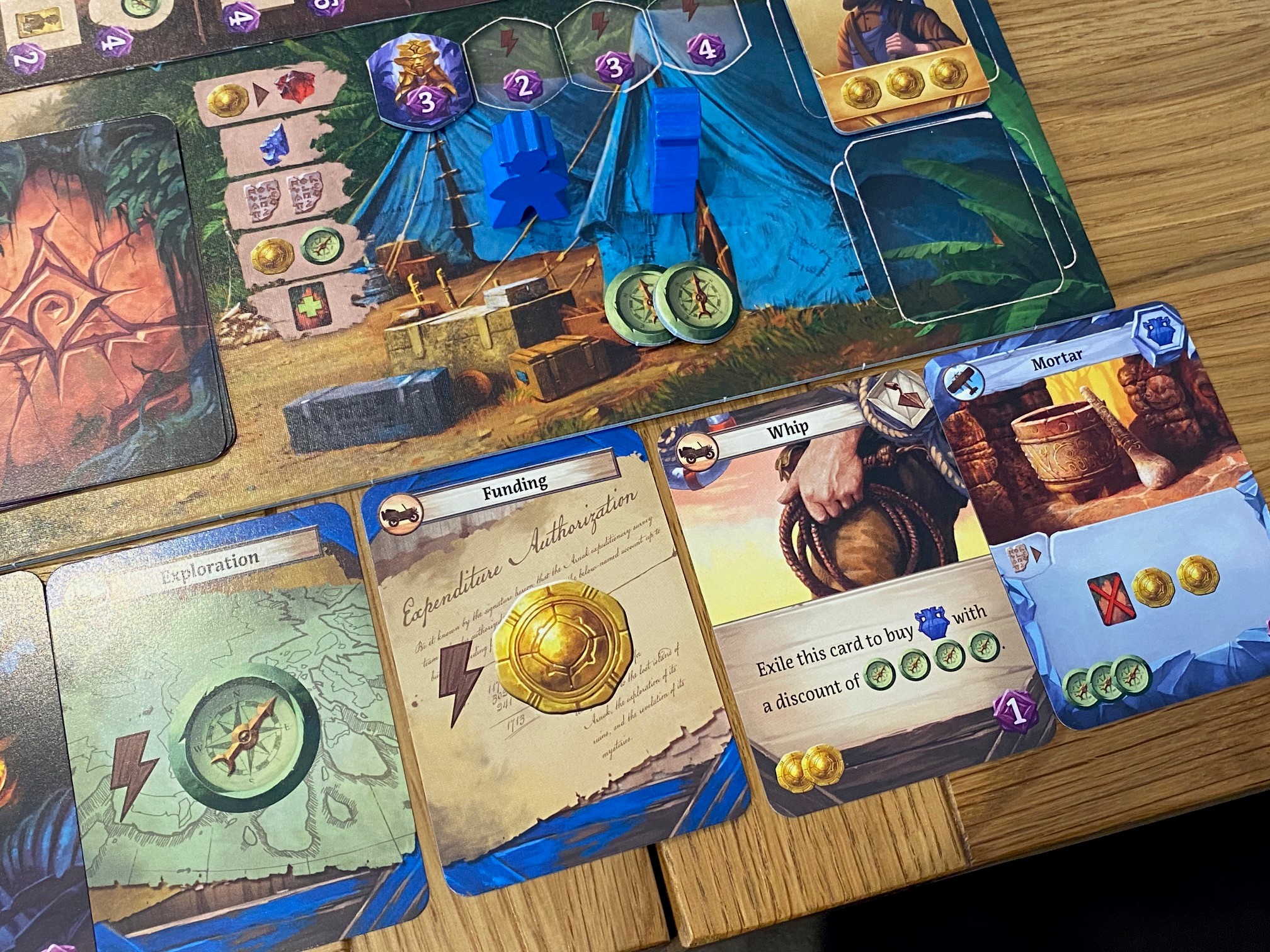 When I think about where Lost Ruins of Arnak fits in my collection, I’d say it offers a hobbyists level of decision-making potential, but a much more casual lead-in. It feels in some ways similar to Great Western Trail, because GWT also has an element of deckbuilding (albeit a very different one) and includes aspects of action selection on a somewhat randomised board.

The thing is, GWT is way harder to teach and even harder to master —where Lost Ruins of Arnak is a lot more forgiving to learn, and even though it is filled with difficult choices, they are a lot more immediate. You may be working towards a certain thing —upgrading your assistant, or facing a guardian, for example —but the path to these things is clear. You know the cost, you know how to generate the resources, you can map out how you’ll gather those resources, then move up the research track, then maybe face that guardian. 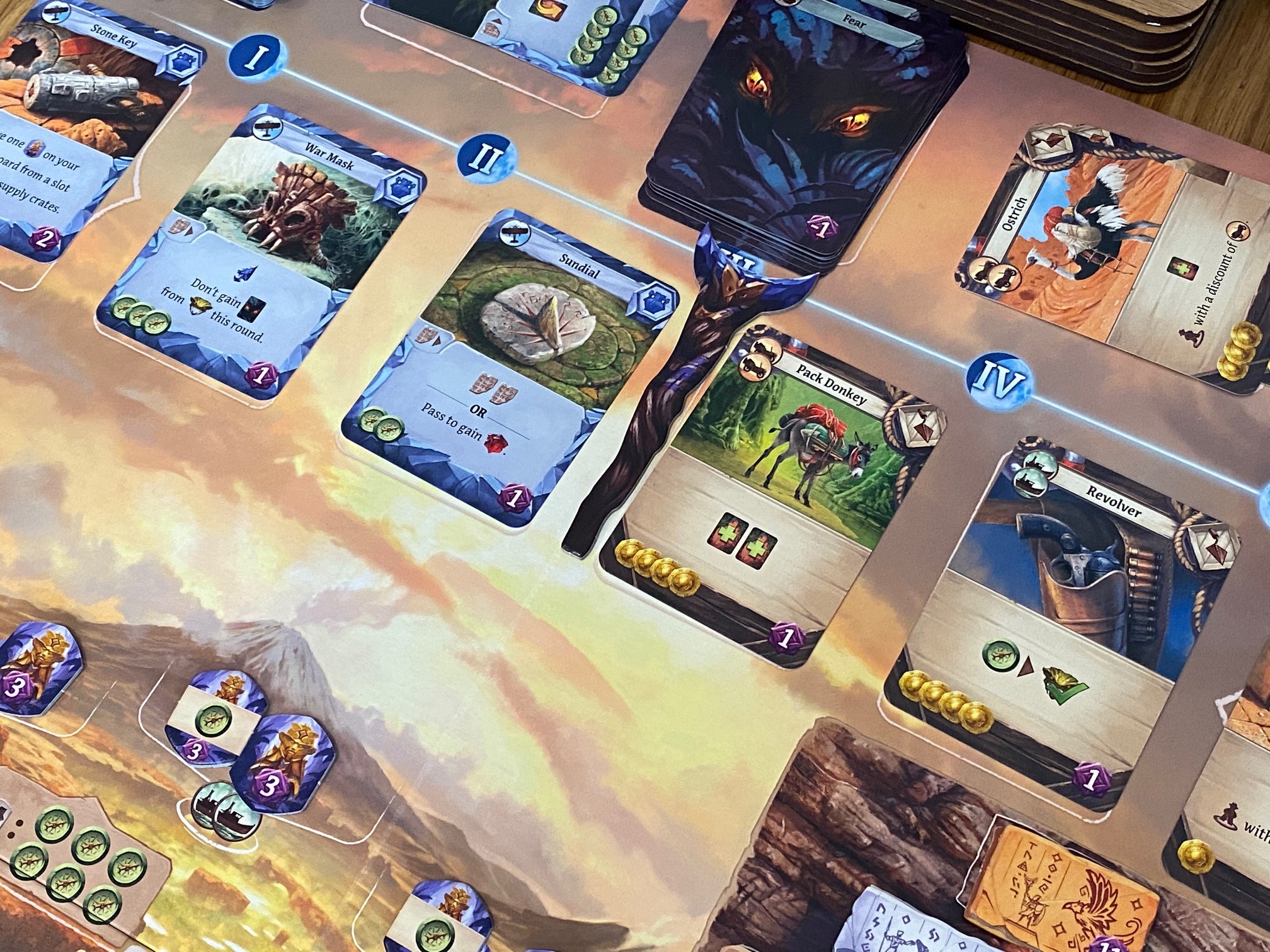 This means that —and I say this tentatively —I think Lost Ruins of Arnak sits in the same sort of space as maybe Clank!, or just above Lords of Waterdeep in terms of accessibility. This is a game that you could definitely teach to someone who has played few if any, modern board games —but it can still delight even a grizzled hobbyist, thanks largely to its bombastic build quality and ever-expanding decision tree.

Lost Ruins of Arnak is a deservedly hot game and I really think that it has a place on every shelf thanks to a theme that lifts the spirit in what has otherwise been a pretty grim year. To sum it up in terms of everything from build quality to mechanics, Lost Ruins of Arnak is just good, solid fun. It does little to change the genre, but everything here —including an excellent solo mode —is extremely well done.

You can find Lost Ruins of Arnak on the developer’s website.