Whilst I admit that I’ve been something of an evangelist towards two-player board games recently, I couldn’t help but feel disappointed that the new 7 Wonders: Second Edition strips out all two-player variants entirely. That is only because, since the release of the original 7 Wonders, a dedicated two-player variant called 7 Wonders Duel has been released, and let me tell you now, it is more than good enough to make any of the old variants completely redundant.

Built using the same ideas of civilization building, military conquest and scientific advancement, 7 Wonders Duel takes the same art style as the original game (not the Second Edition remake, for those interested) and delivers an incredibly tight tug-of-war experience. Traditional drafting is replaced by a completely unique drawing system that I can’t wait to explain, and science or military conquest can now result in an outright victory if the balance tips too far one way. 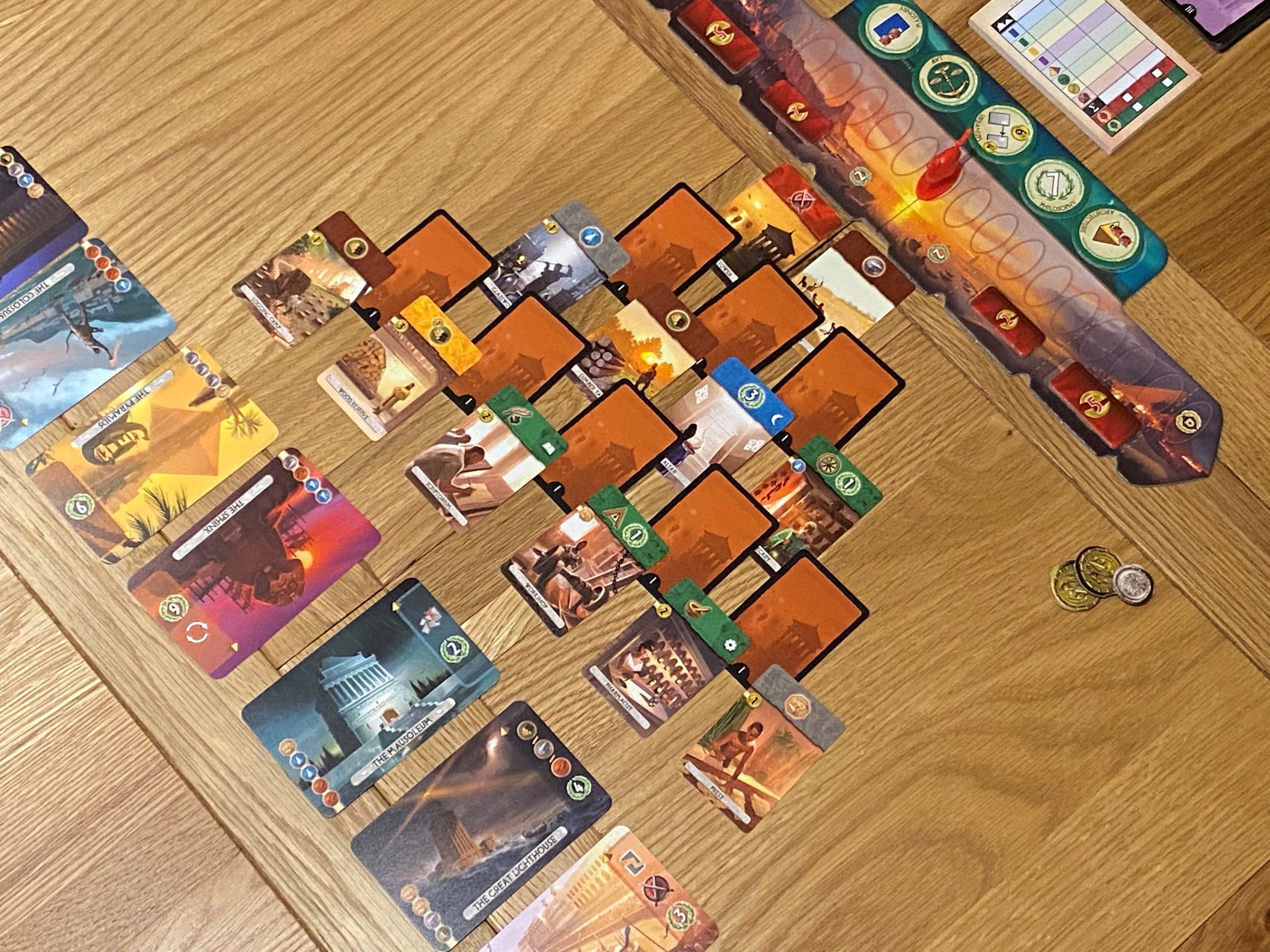 The objective of 7 Wonders Duel is to ensure that your civilization triumphs over your opponent. If the game runs to its full conclusion, this will be decided based on points shown on the civilization and wonder cards that can be built, and on the tokens gathered for science and military victories.

Each game takes place over three ages that are represented by individual decks of cards, and during setup, three cards will be removed from each deck at random (so you never know exactly what is or isn’t in play). A deck of guild cards is also shuffled, and three of these are included in the Age III deck, offering potentially powerful ways to score if you’ve set up your nation in the right way.

Also during setup, the players will shuffle twelve wonder cards and deal four of them to each player. The players will each take one card from their set of wonders and pass them to the other player, who will then take two and pass the remaining one back. This leaves each player with four wonders to lay out in front of them (to build during the game) and four that will not feature in the game at all. 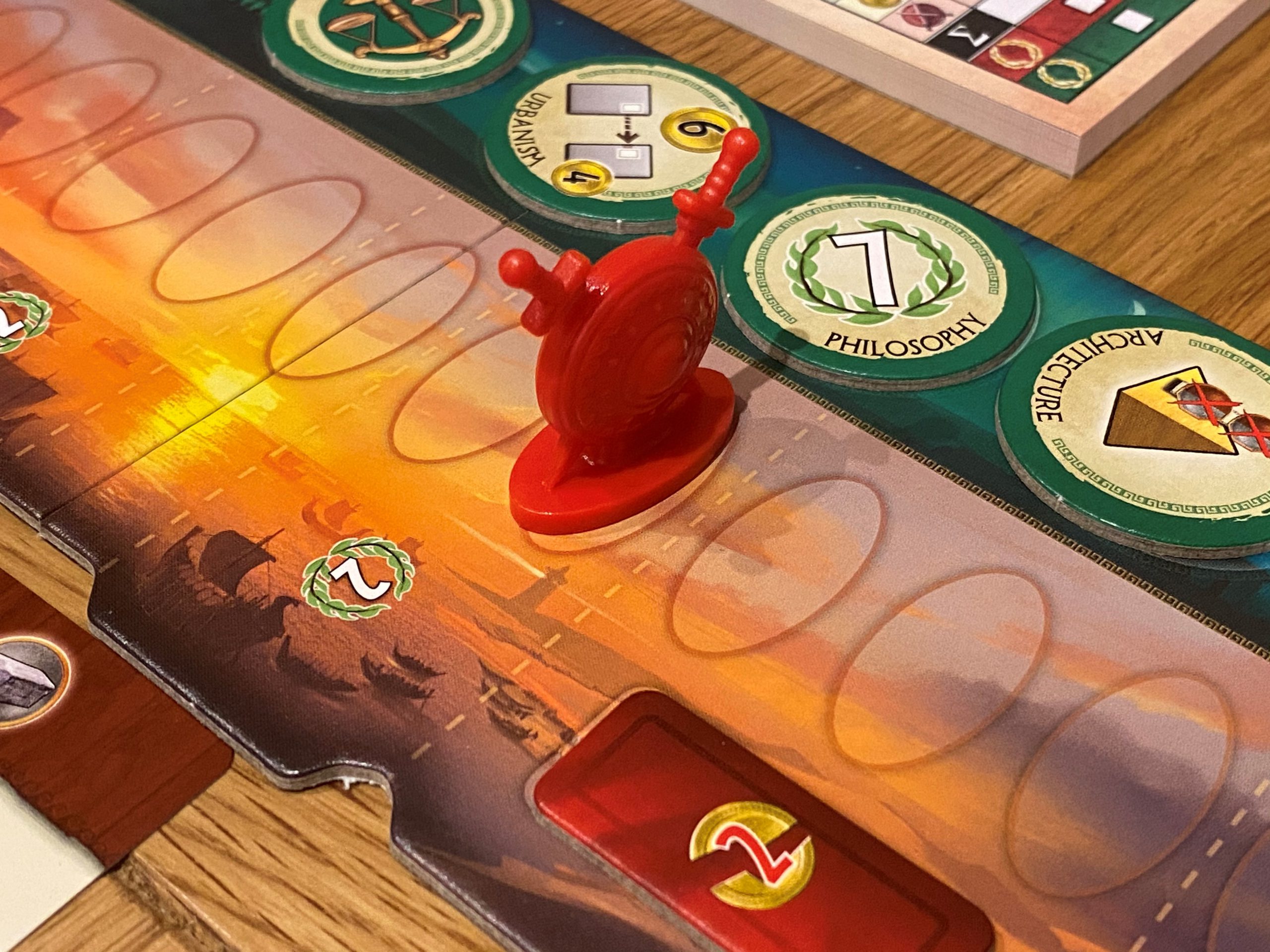 The most interesting part of the setup is the way in which the age cards are placed, and each age has its own pattern. What I mean by this is that the whole deck of age cards will be dealt out in a specific pattern with rows of interlocked face up and face down cards. Players can only draw cards from an uncovered row, whilst face down cards remain face down until both cards on top of them are taken.

One of the key elements in 7 Wonders Duel is when to make a decision to take a weaker card that doesn’t reveal any new ones for your opponent, versus when to take a card you actually need that might flip two even better ones for your opponent to snatch. This, for me, is the real tour-de-force of 7 Wonders Duel and it is infinitely better with two players than a variant on the standard drafting of 7 Wonders would be.

7 Wonders Duel is also beautifully simple, and on their turn, a player will simply take one of the visible, accessible cards and then choose what to do with it. This might be to build it in your civilization —by paying a cost (if there is one) and placing it down in front of you. Another choice might be to build one of your wonders by paying the cost (on the wonder, not the card you took) and tucking the card underneath that wonder to show that it’s been built. Your third and final option is to discard the card, taking two coins plus one for each commercial building you have. 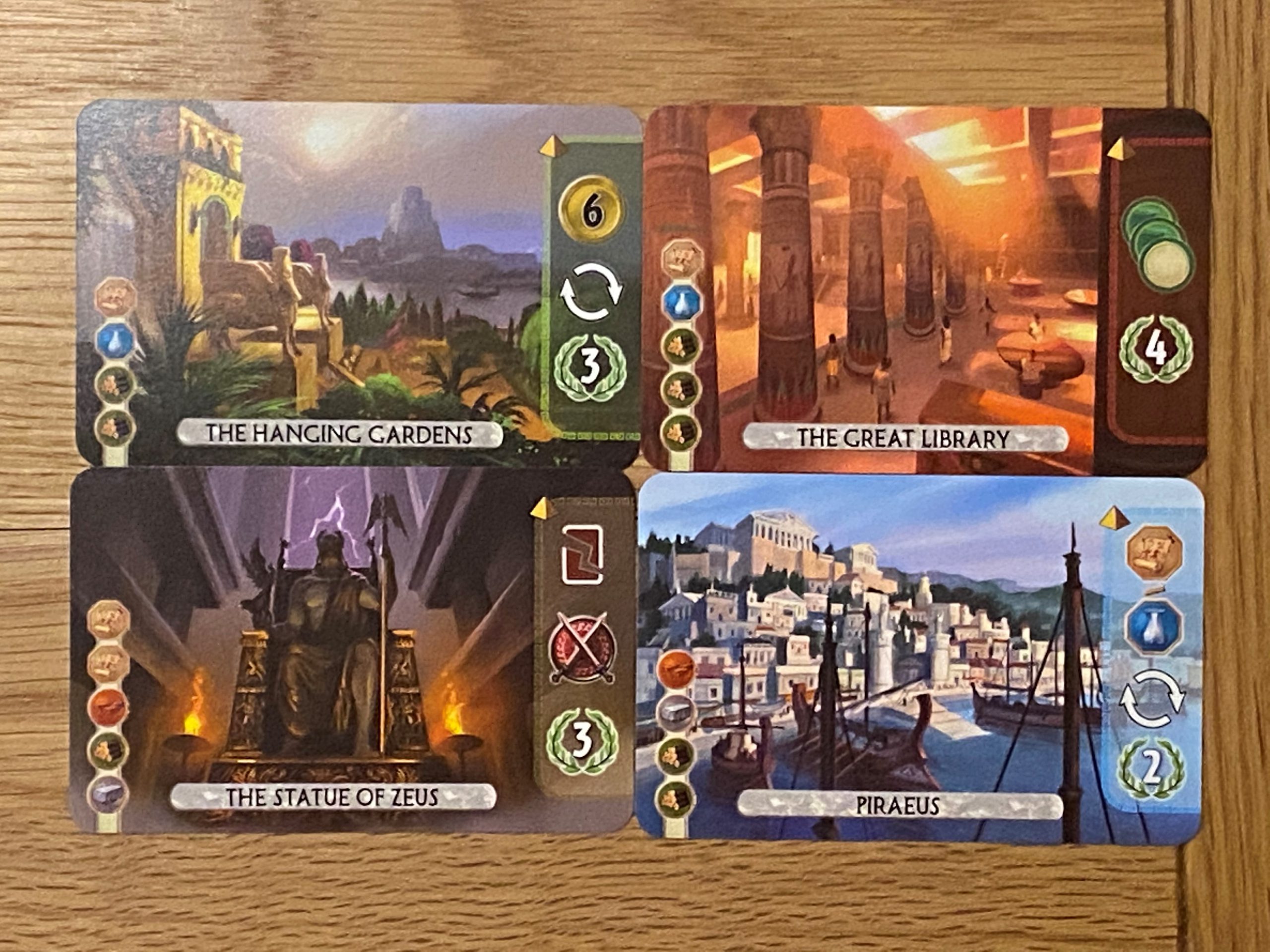 And that is just about it, believe it or not. 7 Wonders Duel is so gloriously simple that it’s almost impossible to get your head around how many design nuances and clever mechanisms there are here. Building a card will usually add something to your civilization —like lumber or stone —and these are easy to resolve because they simply give you that resource for all future transactions.

A science or civic card might give you a science symbol, which might lead to claiming one of the five science tokens that could lead to an immediate victory. Military cards advance you a number of spaces on the military track towards your opponent —reach the end and you win the game or end an age in opposing territory and you take a token worth two or five points (depending on where you are) and you force your opponent to discard coins.

Some cards feature a specific symbol sitting quietly in a corner, not doing anything. In later ages though, you may see a card that shows that symbol as an alternative payment method. If you take that later card, you can simply build it for free —for example, if you upgrade your fountain to baths. The base cards in these chains tend to be a little underpowered for the price, and of course, you don’t know if the next card up is even in the deck —but it is always worth the risk when it pays off and you get that next card. 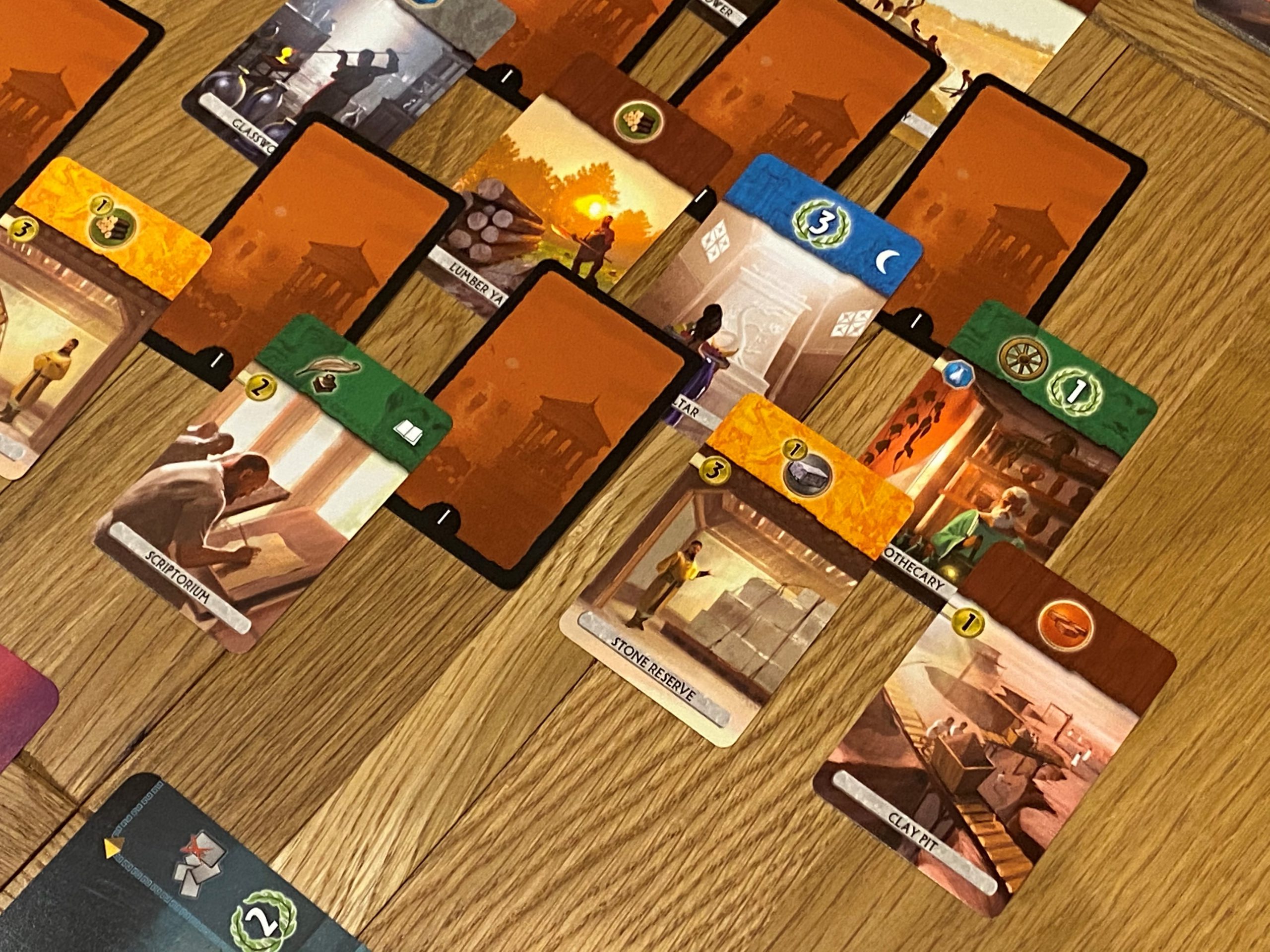 The wonder cards also add some interesting features as well, with a handful of each focussed on science, military, commercial and general to help advance the civilization that builds them. Players can, if they wish, make the game even more competitive by allowing either player to build any available wonder, but in the base model, if either player completes their fourth wonder, then the other can never complete more than three (for a total of seven, get it?).

Once both players are up to speed with the rules and the setup (which is quicker than it sounds) then a game of 7 Wonders Duel can be completed in less than 30 minutes, and yet as you play, you’ll feel as though you’re playing a much more complex game. 7 Wonders Duel makes big decisions easy by using its clever drafting, simple turns and a little bit of luck to create a fairly small decision space where almost everything feels rewarding.

7 Wonders Duel is not the kind of two-player game like Chess where the same two players will iterate their strategies together based on their memories of the previous games. It’s much more variable than that thanks to the randomised setup and the missing cards, but it does allow players to develop strategies, and to identify them before they become dominant and then counter them. 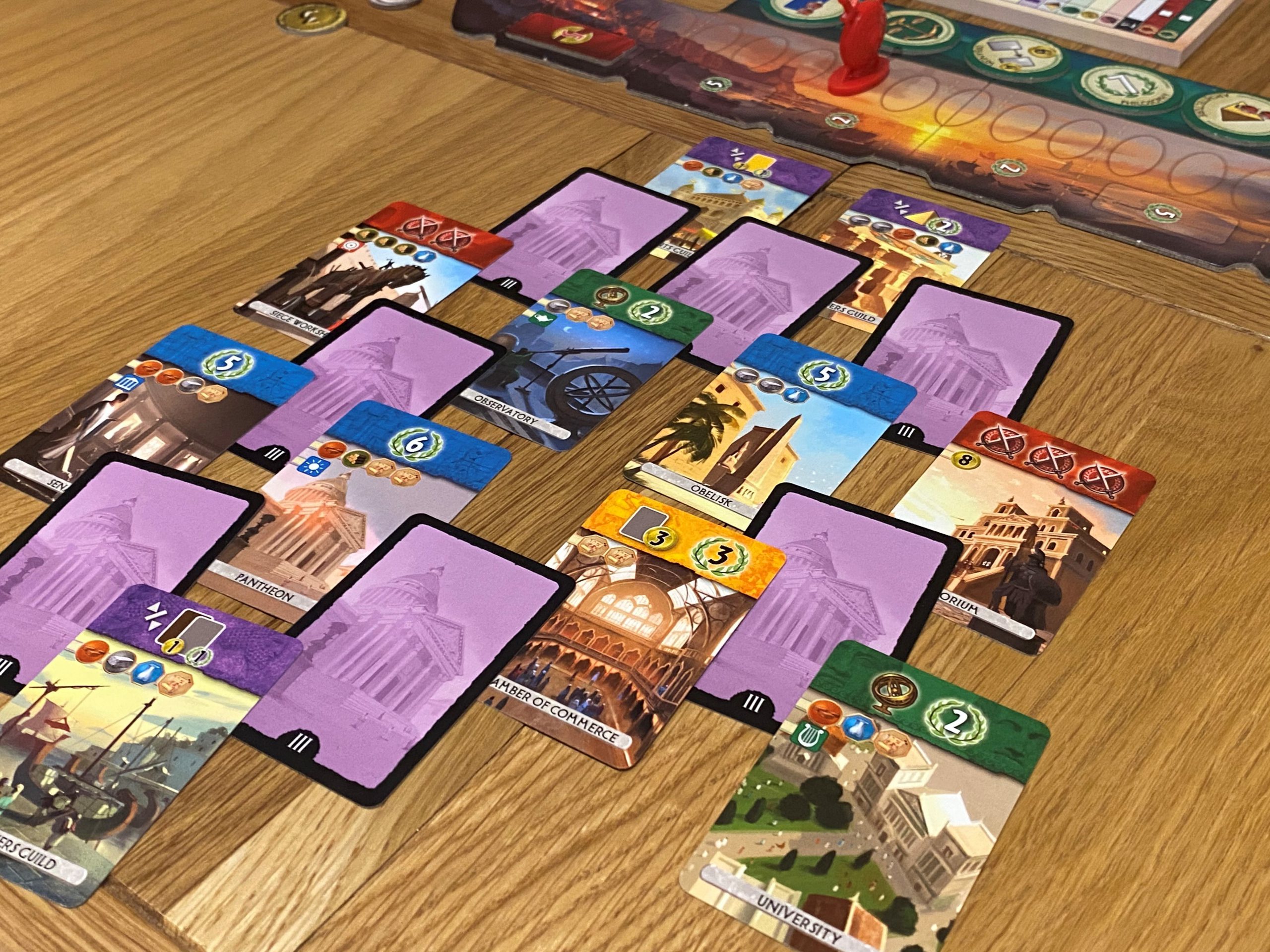 This is a very finely balanced game that makes the absolute best of the two-player count that it is so focussed on. It looks fantastic on the table and the box size is perfect to shove in a car glove box or a suitcase, should you wish to travel with it. 7 Wonders Duel can frequently be picked up for less than twenty quid, which is frankly insane.

If you’re likely to have the option to play with just one other person on even an infrequent basis and you have an interest in the classical setting, you just need to buy 7 Wonders Duel —there’s nothing else to say!

You can purchase 7 Wonders Duel on Amazon.

Love board games? Check out our list of the top board games we’ve reviewed.
a Rafflecopter giveaway

7 Wonders (Second Edition) is an old treasure, brought back to life with spit and…