Laser League – A Competitive Sports Game for the Future

Lasers, Abilities, Pick-Ups, and Death; these are the four core ingredients in 2150’s hottest, most adrenaline pumping futuresport: Laser League.

Roll7, the studio behind OlliOlli, have been working on something new and neon for the last while, with the basic idea rattling around since 2013. Their idea? A mechanically simple, arena battler. A game quick to pick up, and a hard game to put down – light on the controls, but heavy on the depth.

After a little refinement, and a partnership with industry publisher ‘with many hats’ 505 Games, that idea became Laser League – the co-operative and competitive arena title we’re talking about today. 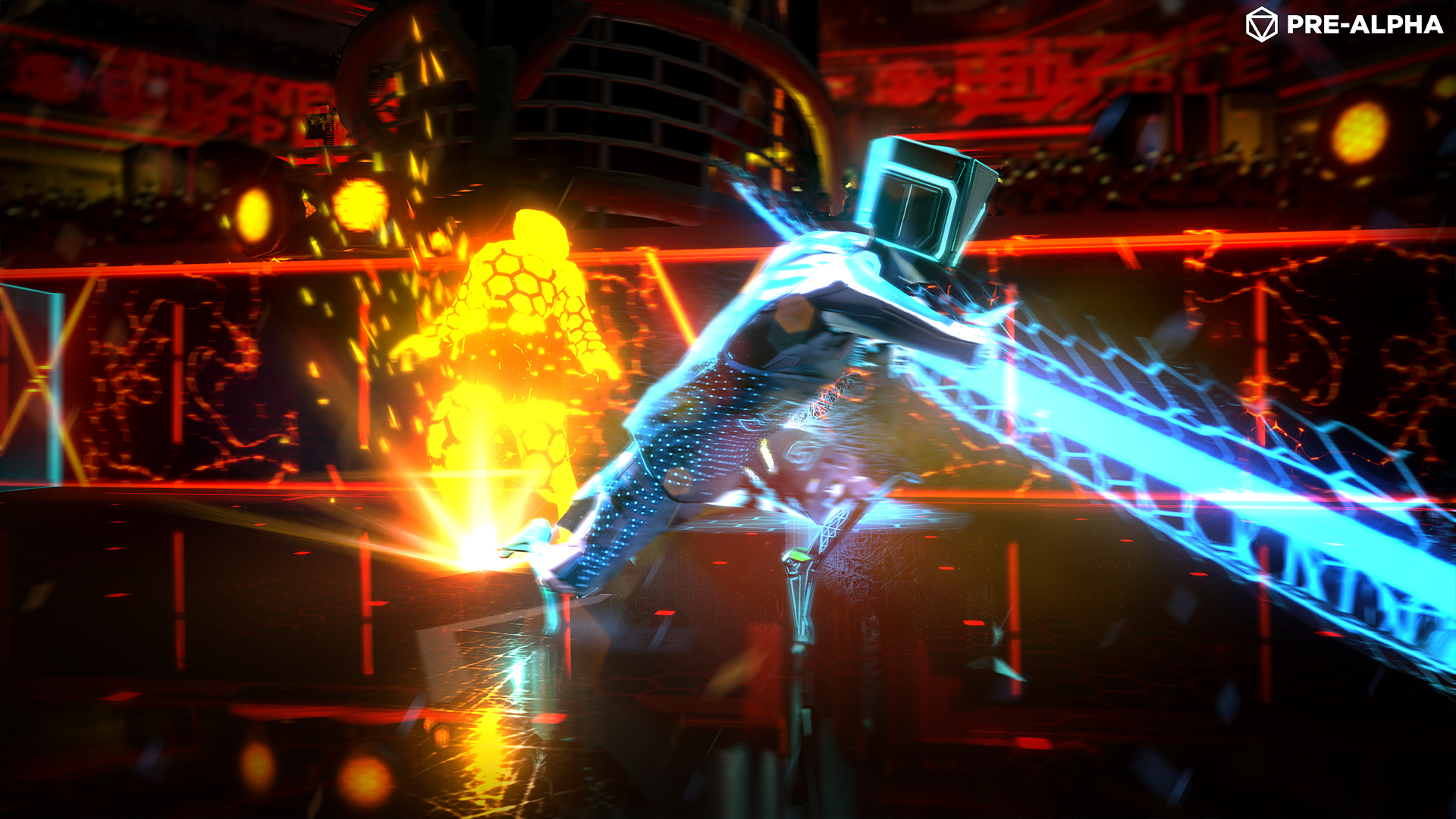 Laser League builds on the successes of small, single-screen party games by adding in carefully designed levels, balanced abilities and a few crazy mechanics, all while leaving the wire-frame design of the game open to expansion and new content. Bolting around its battlegrounds seemed instantly reminiscent of select mini-games and levels from Mario Party, Super Monkey Ball, Fusion Frenzy, and more, and that’s really the best place to start talking about the game.

You see, in many ways Laser League feels like it was born as a little mini-game challenge – a simple, concentrated dose of ideas initially started as some ‘survive the deadly lasers’ loading screen, or a short sequence where one party has to trap another before the two swapped sides. Whatever the game started as though, it’s advanced far beyond that now – complete with character classes, leader-boards, and about 30 map varieties, the team have taken that concentrated element and expanded on it, without diluting it. 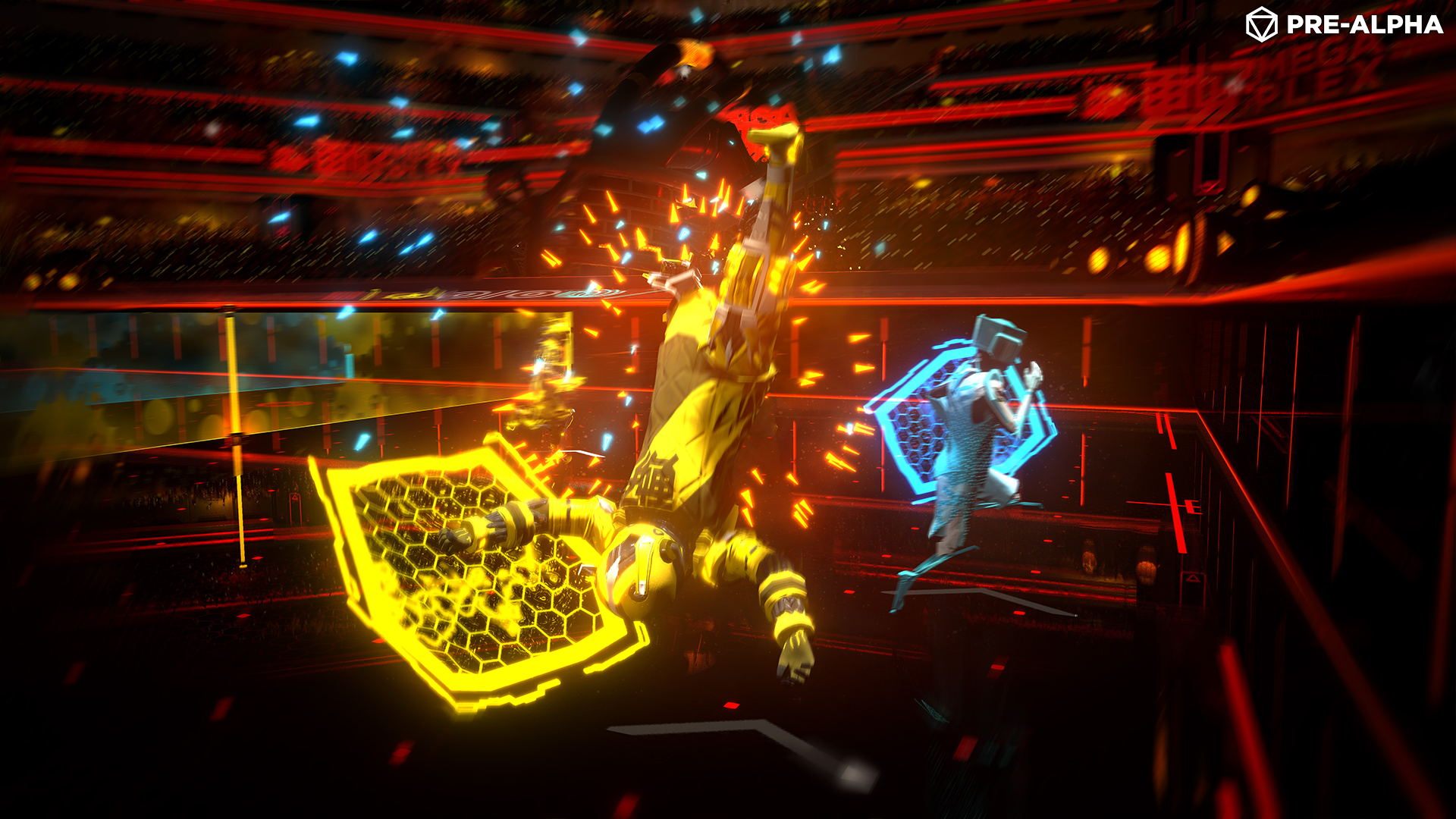 The goal of each match is simple, outlast your opposition. You do this by running around the map and touching nodes, this then activates them on the spot causing them to generate deadly laser fields, either sending them flying across the map, or opening them into a spinning or moving trap. Some strafe the top of the screen, others criss-cross over the map, frustrating most player’s lofty plans.

At any point there can be dozens of these lasers hurtling around the screen – and the longer the match lasts the greater the density of the nodes, making the game more and more tense. These nodes -once activated- remain friendly to you (with only one exception which we’ll get to later) for a short duration, probably about 15-20 seconds. This might not seem like much, but the pace of the rounds are so rapid that they rarely exceed three minutes, so those 20 seconds can seem like a lifetime.

If you get touched by the laser you die – extremely simple. That said fallen comrades (the game can be played 2vs2, 3vs3, 4vs4) can be revived by simply walking over them, and are then back into the battle within a few seconds. This means that teams can recover from almost annihilation if left to their own devices — although they may find themselves greeted with a flurry of beams which had been activated while they were scraping themselves back together. 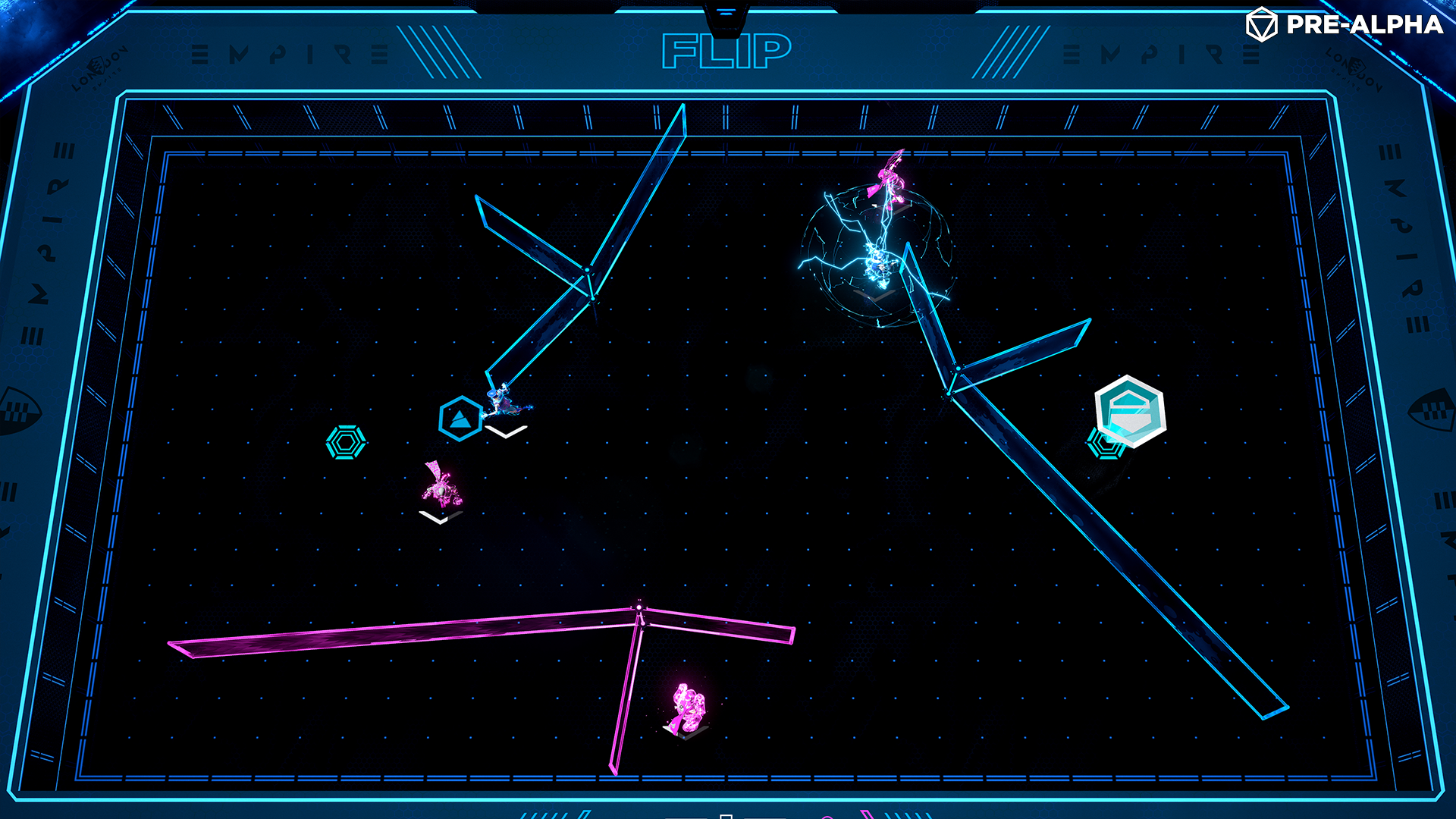 As you can hopefully imagine, this means that there is really no ‘perfect’ tactic to dominating a match – even if you secure every node on the battlefield your opponents may be wily enough to survive the droves of lasers, and may snatch the deactivated nodes away from you while you gape in awe. It’s fast too, and only gets quicker as the match goes on and the tempo increases.

This is alien and otherworldly when you first start out. Keeping eyes on your character while what seems like chaos goes on all around you certainly takes a while to adapt to – but, once you’ve started recognising the patterns of the level the earliest parts of the rounds become more  like crossing a busy dance floor than fighting through a mosh pit.

Now that we’ve addressed the basic formula of the game, it’s time to talk about some of the game’s other features. Namely, the walls, the classes, and the power-ups.

The walls are a complete game-changer. Players are able to wrap around the map by passing through them, a la PAC-MAN and various arcade classics, while lasers follow the traditional rules of not crossing the boundaries. What this means is that the further you are away from the edges of the map, the more likely you are to be trapped by moving lasers.

That said, it’s not really natural in games for us to travel through walls, so it remained impressive whenever somebody performed a class move (more on that in a second) from ‘across the map‘, or simply nipped over the boundary to retrieve a fallen team-member. 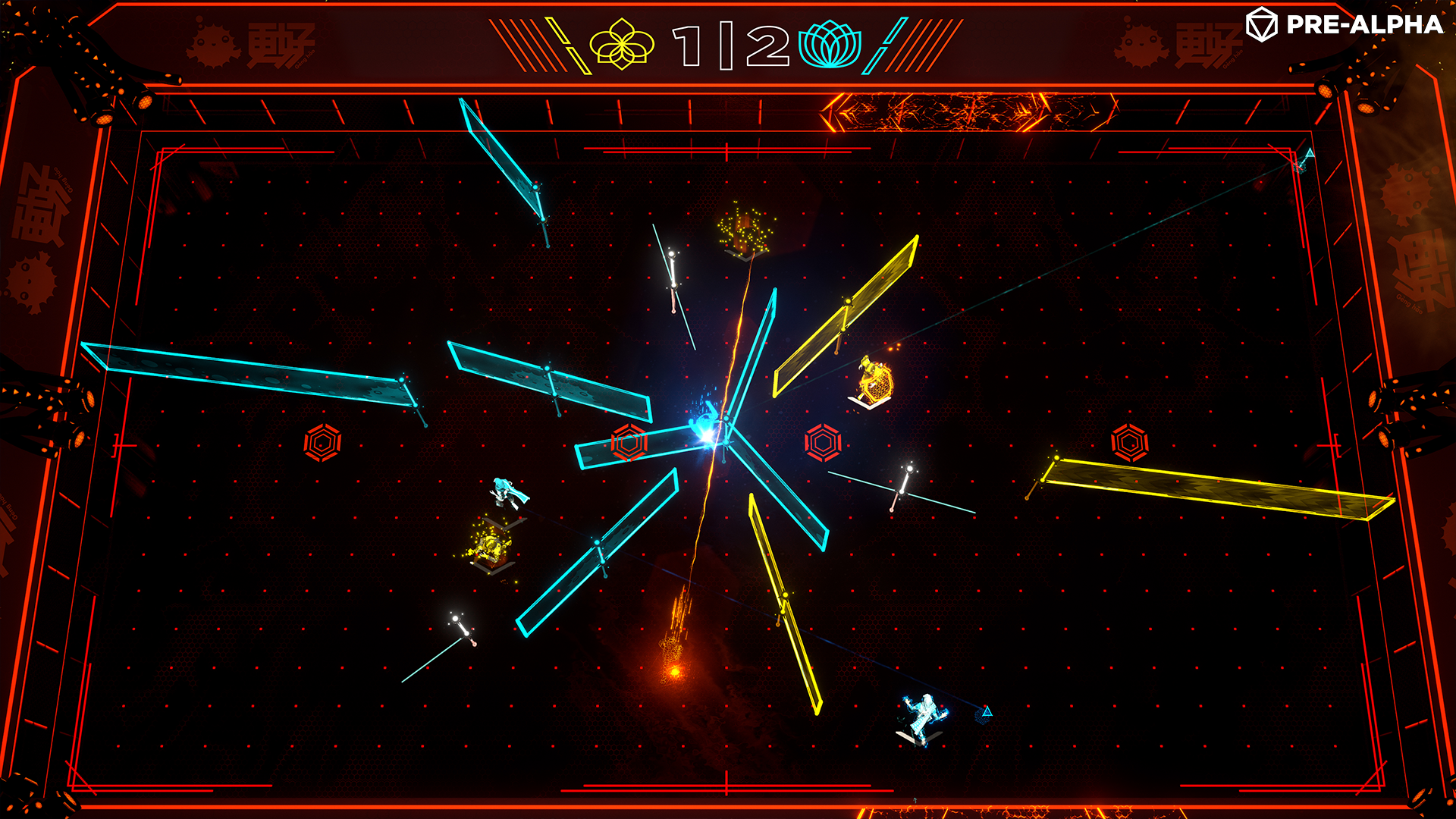 The classes are equally important. The game currently features six classes ranging from a medic who can briefly phase through lasers (to revive, of course); a sniper, who leaves a marker with a button press and then returns to that point with another, killing all in their path; through to a thief who can flip any nodes within a select area of effect. There’s also character modifiers which can mean reduced ability charge times, or bulk recharge on successful executions.

There’s no ‘strong’ or ‘weak’ class, although certain node arrangements do lend themselves to certain classes more so – but it’s really a case of what you feel will serve you best to beat your opponent.

As my team-mates on the sofa rotated we tried a variety of tactics, a particularly successful one was me stunning enemies to the ground while the game’s creator, John Ribbins, killed our opponents with carefully timed blade-dashes. That said, I had a lot of fun playing as the thief class, swapping nodes to my side just as enemies attempted to dash attack me. 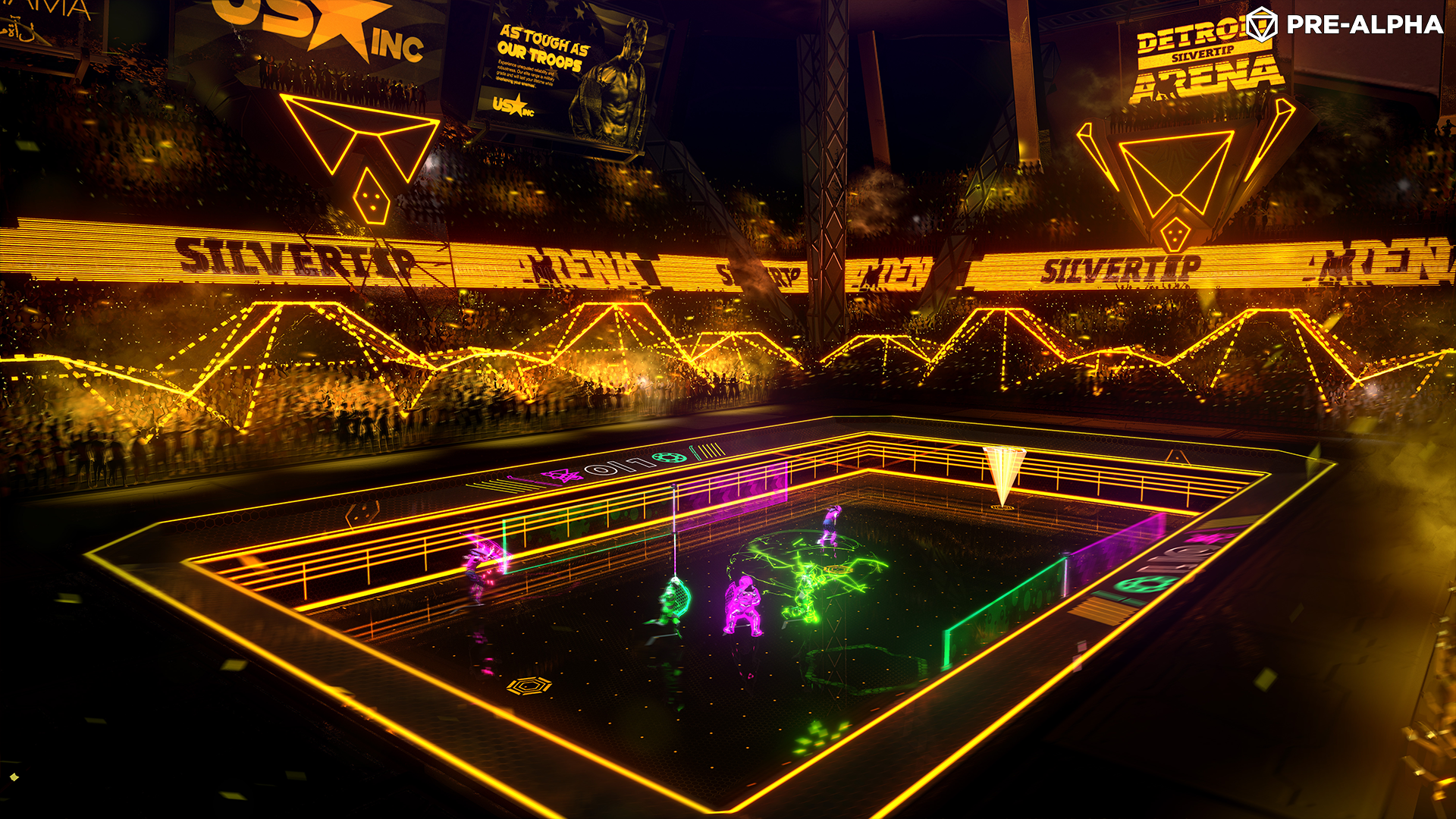 Even when deadly team combinations are deployed the game is never hopeless though. After a round concludes (the game follows a best of three scoring system) the losers get to change up their classes and enhancements before heading back in. This works well at extending the game time, and keeping the long-game tense.

Finally, the game has power-ups which deploy in the middle of the map -a reason to venture into what could be the deadliest part of the arena. There’s several of these in the game, with each of them affecting the lasers in various ways: some break the longer lasers up, some flip all to the other side, some slow them down, some speed them up, some simply grind them to a halt. Each of these is easily enough to tip the balance if deployed at the right time – and I confess that I accidentally flipped the entire board to the rival team’s colour once while not paying attention. Whoops.

Outside of the main game there are also metagame elements which see players competing in leagues all while unlocking ranks, celebrations, and customisation options. This is all the start of an attempt to turn the game into something a little big bigger than a local multiplayer game – an eSport.

I remain a little unsure about any company being able to ‘make‘ an eSports success story themselves, I instead believe that all the company can do is prepare the game as best they can for it to grow into one – maintaining a plan for future content should it go down that path.

The conversation of future content for the game came up multiple times during the event, with enthusiastic conversations about new maps, layouts, and classes being the longest conversation during the event. This included a fair bit of joking about more aesthetic choices in content being added, like hats and pets. We joked at the time, but the impression was that if enough people wanted those things then the developer was more than ready -and able- to make it happen. 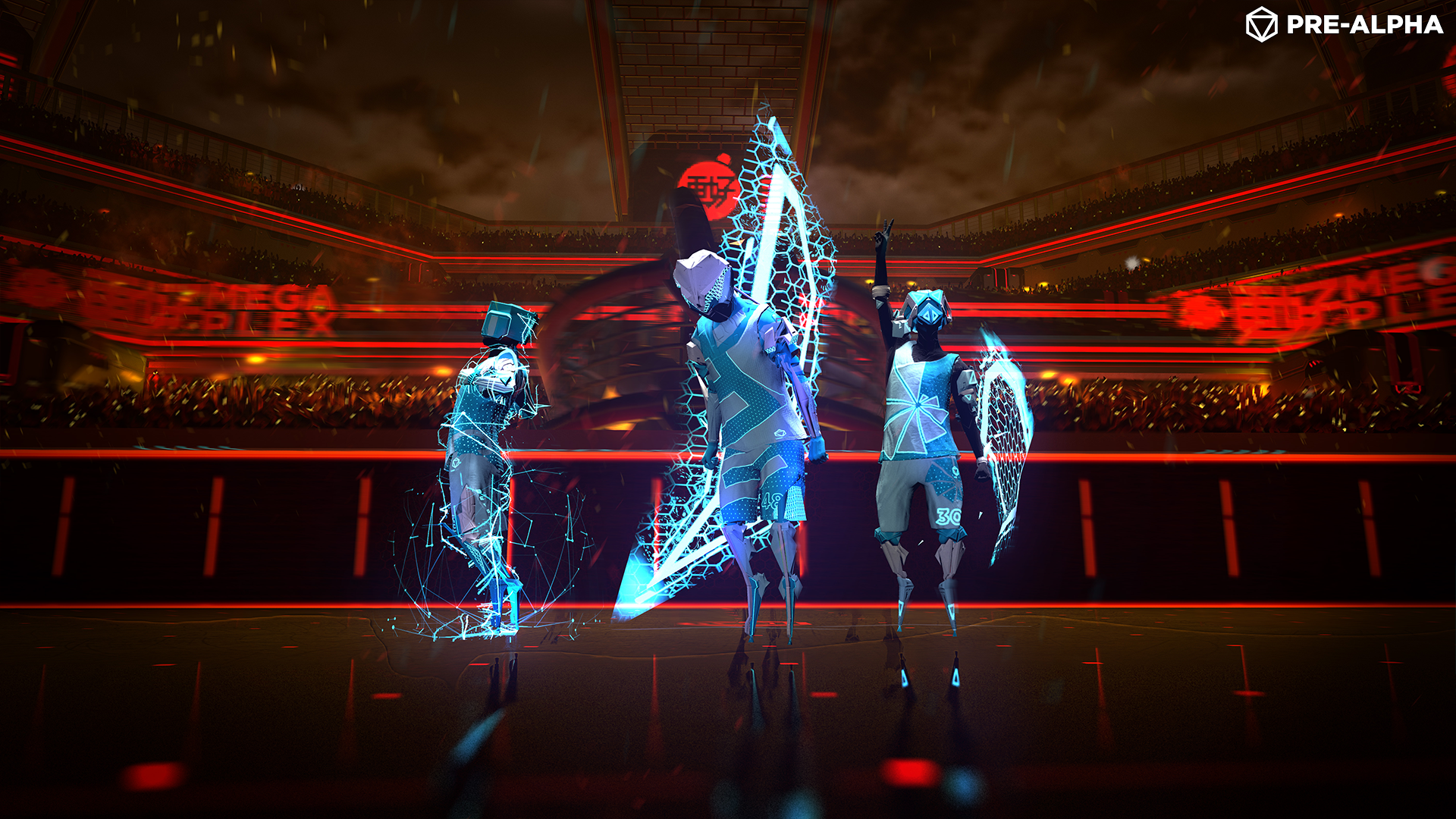 Laser League as it stands is a perfect local multiplayer title, if the developers add more maps, modes, and maybe even reskins (Orcs vs Skellies, etc) to the game -or even open it up to Steam Workshop- then it’ll have an extremely bright future ahead of it. As to grabbing the eSports market – who knows? But it’ll almost definitely be remembered as a game that executed party play perfectly.

Laser League is expected to launch into closed beta later in the year, those interested can register on the game’s website. It is expected to release to the public in early 2018 for PC, PS4 & Xbox One.