When it comes to attending work meetings or events where I need to judge on camera, as well as  being in pictures looking slightly “gamer”, the Kraken BT Kitty Edition does it’s job on looks alone. My headset is wireless, bright pink, and has light up cat ears on the top! What more can you ask for when taking a selfie or needing to sit through Chad telling you stats for the company website for the third time?

I’ve really enjoyed my time with the Kraken BT Kitty Edition, if you didn’t know that already.

The headphones feel great, even with long term use. They block out a lot of outside sound, as you’d want, and the padding is really lovely. The sound quality within the headphones are good — you can adjust the volume on the side of the headset — giving it all of the features you’d expect from a high quality headset. 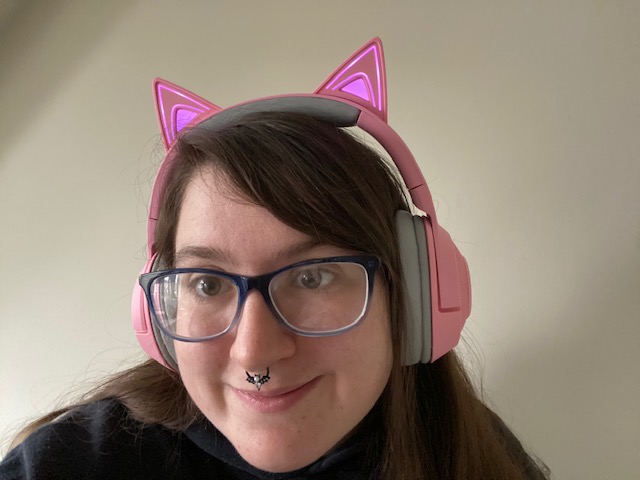 This headset is wireless, connecting through bluetooth, so if you want to use it on your PC you might want to check to see if your PC has bluetooth already. I ended up purchasing a dongle to connect the headset to my PC — which has been working great. I can walk all the way across my room and still hear through the headset. There is a button to turn the headset off and on — a robotic voice will let you know that it is connecting — and the Kraken BT Kitty Edition also turns itself off after a few minutes of no sound, which works well to keep the battery life alive.

Charging the headset is as easy as plugging it in for a while, though it’s lasted quite some time for me on battery, despite use all work day. The charger cable is included and plugs into a USB port, so you can charge it from your PC. A small light on the side of the headset will show you when it’s charging, full charged, or low battery (as well as glow blue when pairing and paired initially). There is a tiny microphone hole in the headset, which works well for what it is — good for making phone calls or talking to friends. 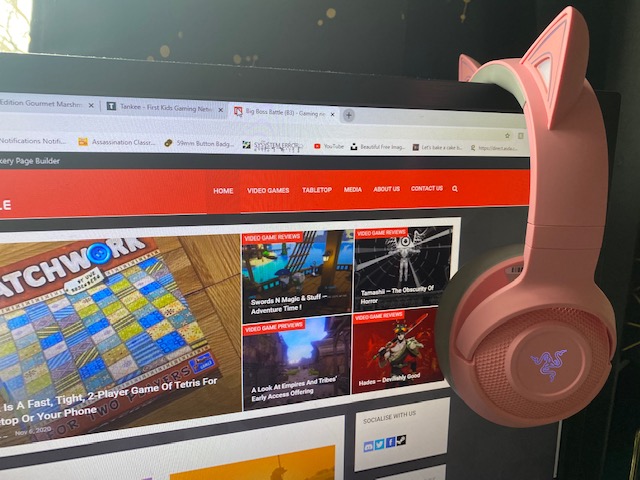 The Kraken BT Kitty Edition also has a Gaming Mode, which can be activated. This is a really interesting concept, the headset will function at a lower latency, giving you audio feedback while you game in real time, if this is something you’d be interested in. I’m not too hardcore of a gamer to really mind either myself.

The ears that initially light up white on the Kraken BT Kitty Edition can change color. This system is a bit more complex. First, you need to instal a Razer app that can allow you to change when your headset auto turns off and toggle Gaming Mode on and off, which then prompts you to download another app, which can edit color. This second app just has a panel of all of your devices, allowing you to tap the name of the item to show a color circle. You can then drag your circle around, find the color you want, and hit okay. There are different effects to play around with, lots of different colors, and even intensities. I just wish it was one app instead of two myself! I found it a bit weird that I now have two apps on my phone for my one headset. 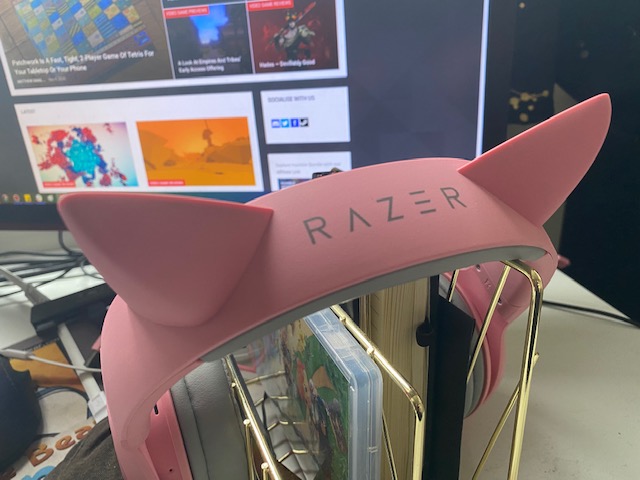 But, that in itself, is a very soft negative in what is otherwise a really lovely, eye catching, high quality headset that I won’t be taking off anytime soon.

You can purchase the Kraken BT Kitty Edition on Razer’s website.