It must be tough to take an IP as popular as former Spiel Des Jahre 2017 winner Kingdomino and expand on it without spoiling a working formula, but Bruno Cathala and friends seem to keep managing it. First we had the roll-and-write Kingdomino: Duel, then we had the Kingdomino: Age of Giants expansion, and let’s not forget the sister title; Queendomino. That said, Cathala has done it again with Kingdomino: Origins. The real question is, do we need all these different variations?

Honestly, no. Probably not. But before I jump to any conclusions, let me explain what Kingdomino: Origins is like, so that you can see if it sounds like it would work for you. In a nutshell, it has a basic “Discovery” mode that works very nearly identically to the original Kingdomino, albeit with a prehistoric (rather than medieval fantasy) reskin. The one key rule change in this mode relates to scoring, and I’ll explain that in a moment. 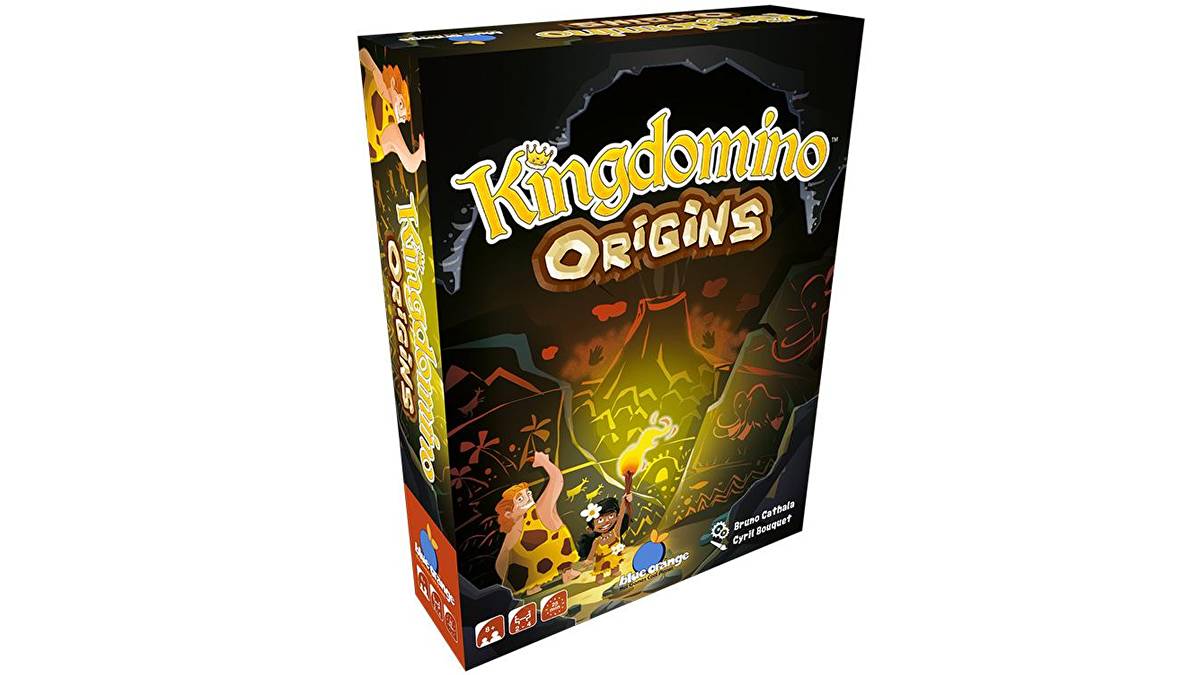 Before I go on, please note that I am going to assume a reasonable level of familiarity with the base game of Kingdomino. As such, I am not going to explain the rules for Kingdomino: Origins in detail here, except where there are differences to the original (which is quite a few.) If you want to read more, please refer to the earlier reviews linked in the opening paragraph.

In normal Kingdomino, players must simply draft tiles from a selection of four, then place them into their own kingdom in such a way that it scores points. How are points scored? Well, by grouping different terrain tiles together to create the largest area, whilst also ensuring that a number of crown tokens are present in that contiguous area. In short, if you have an area of five tiles in size and it contains three crowns, then at the end of the game it will score three (crowns) multiplied by five (spaces in the area) for a total of fifteen. 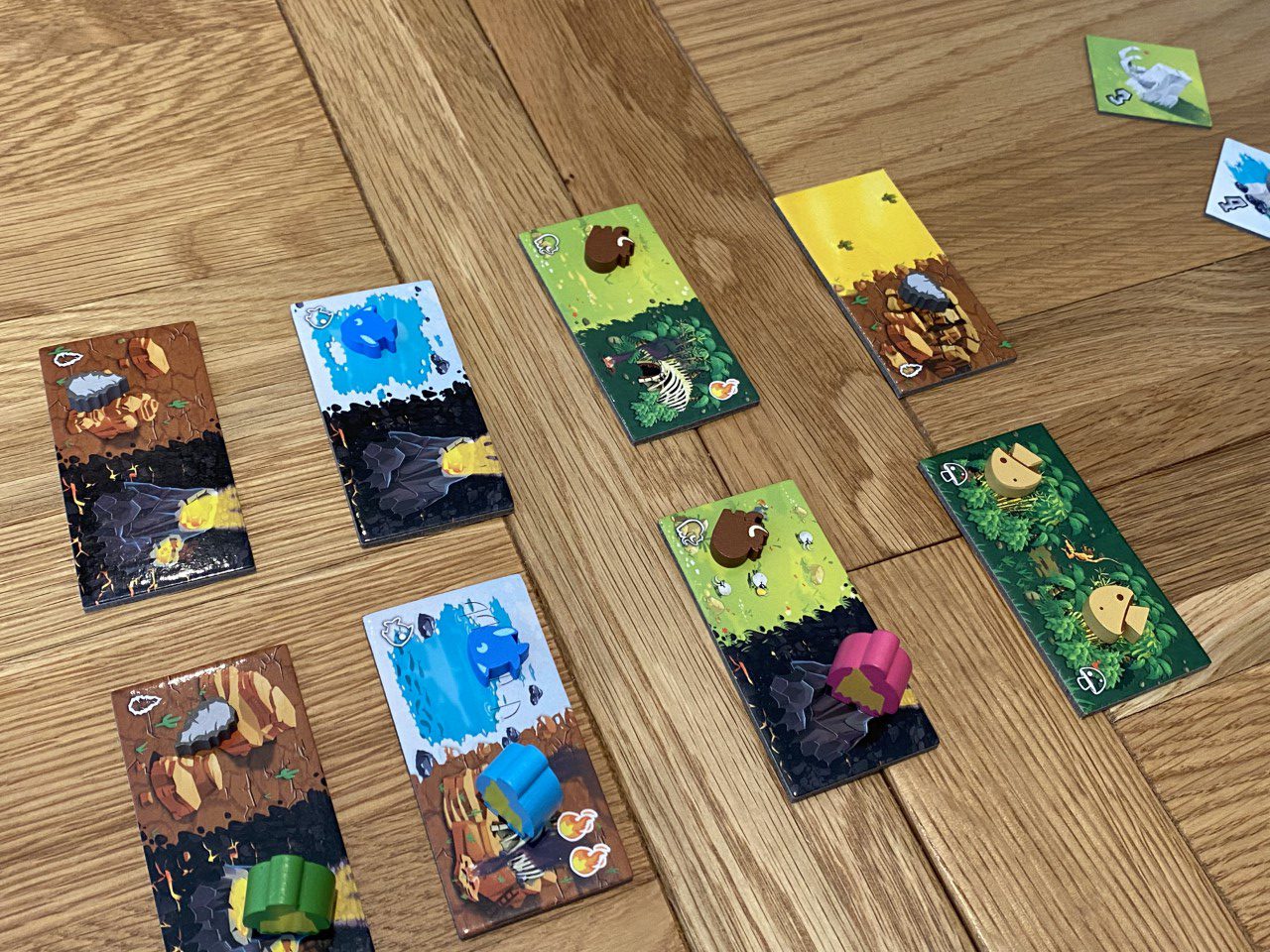 In Kingdomino: Origins the only difference is that instead of crowns, some tiles are printed with flames — and these work in exactly the same way. Instead of the mines (usually with lots of crowns) that are printed on some original Kingdomino tiles, Kingdomino: Origins has volcano tiles with one, two or three spouts. When one of these is placed, the player takes a matching flame token and places it one (for a three flame token) two (for a two flame token) or three (for a one flame token) spaces away from the volcano — adding those flames to the area in which they are placed.

This simple change makes a huge difference to the tactical play in Kingdomino: Origins when compared to Kingdomino, yet it is practically negligible in terms of additional rules. In fact if anything, it makes players feel as if they have far more control over the outcome of their kingdom, and even my five year old can grasp it and enjoys it more than the base game — which is quite an endorsement given how much she likes that. 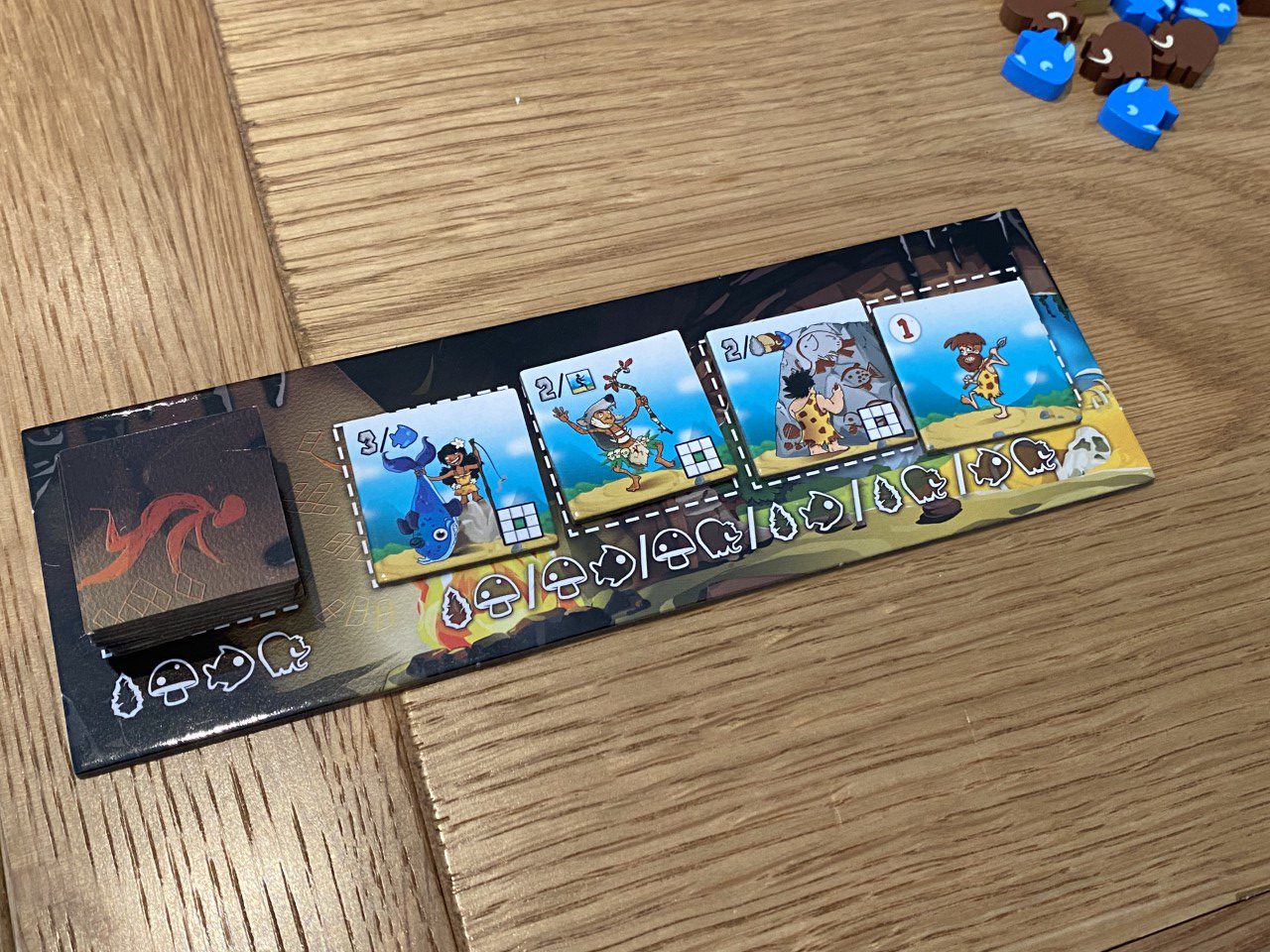 This in itself is a decent improvement in terms of gameplay, but if that were the only new feature I would suggest that Kingdomino: Origins was more of a mild iteration than a new game. Thankfully though, Cathala has included two additional ways to play — each of which is completely new and interesting, especially if you have a secret intent to attract younger or newer players to understanding some of the systems you’ll see in other, more complex games.

The first of these modes is “Totem” mode, which makes use of the bag of gorgeous wooden resource tokens that your kids will probably have been fiddling with whilst you were playing Discovery mode. These tokens are placed on matching tiles when they are drawn so that players can see what they are drafting — and it’s worth noting that fire will “burn them away” if placed on the same space following the volcano rules that I explained earlier. 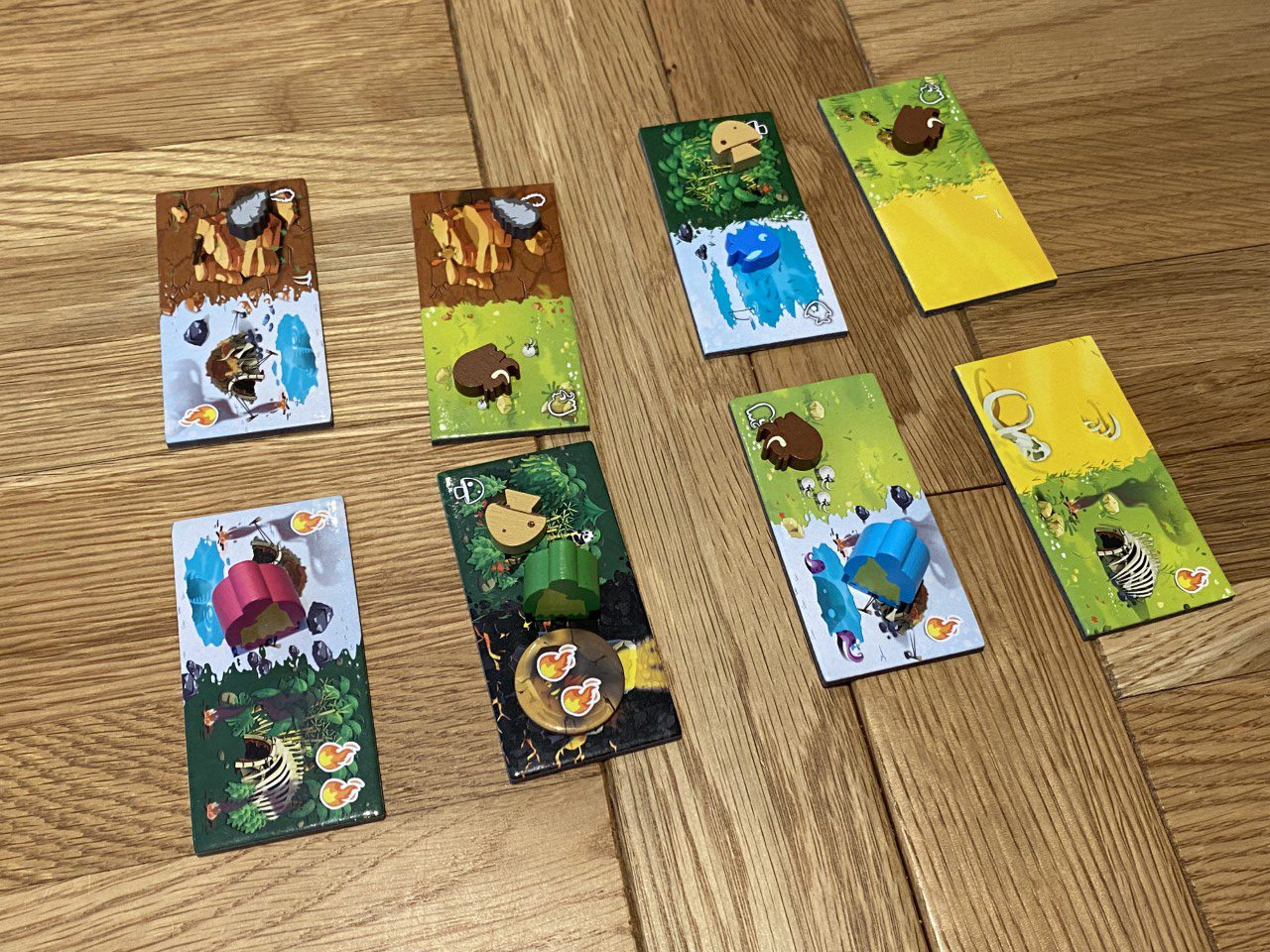 Why do you want resources in your kingdom in Totem mode? Well, simply because whoever controls the most of each resource will control the matching totem — worth up to six points. Ownership can (and will) change often during the course of each game, and in terms of what Totem mode adds to gameplay — it’s that ability to assess a draft slightly differently because it might cause a point swing that is worth twice the value of the totem itself whilst again, it adds minimal rules overhead.

This idea is taken further by the Tribe mode, which basically removes the totems and instead allows players to use the resources to buy variable points tiles. In this mode; any two resources can be swapped for one scoring tile which can then be placed wherever you like — with some offering unconditional points, and others offering points based on resources or situations that surround the tile being placed. 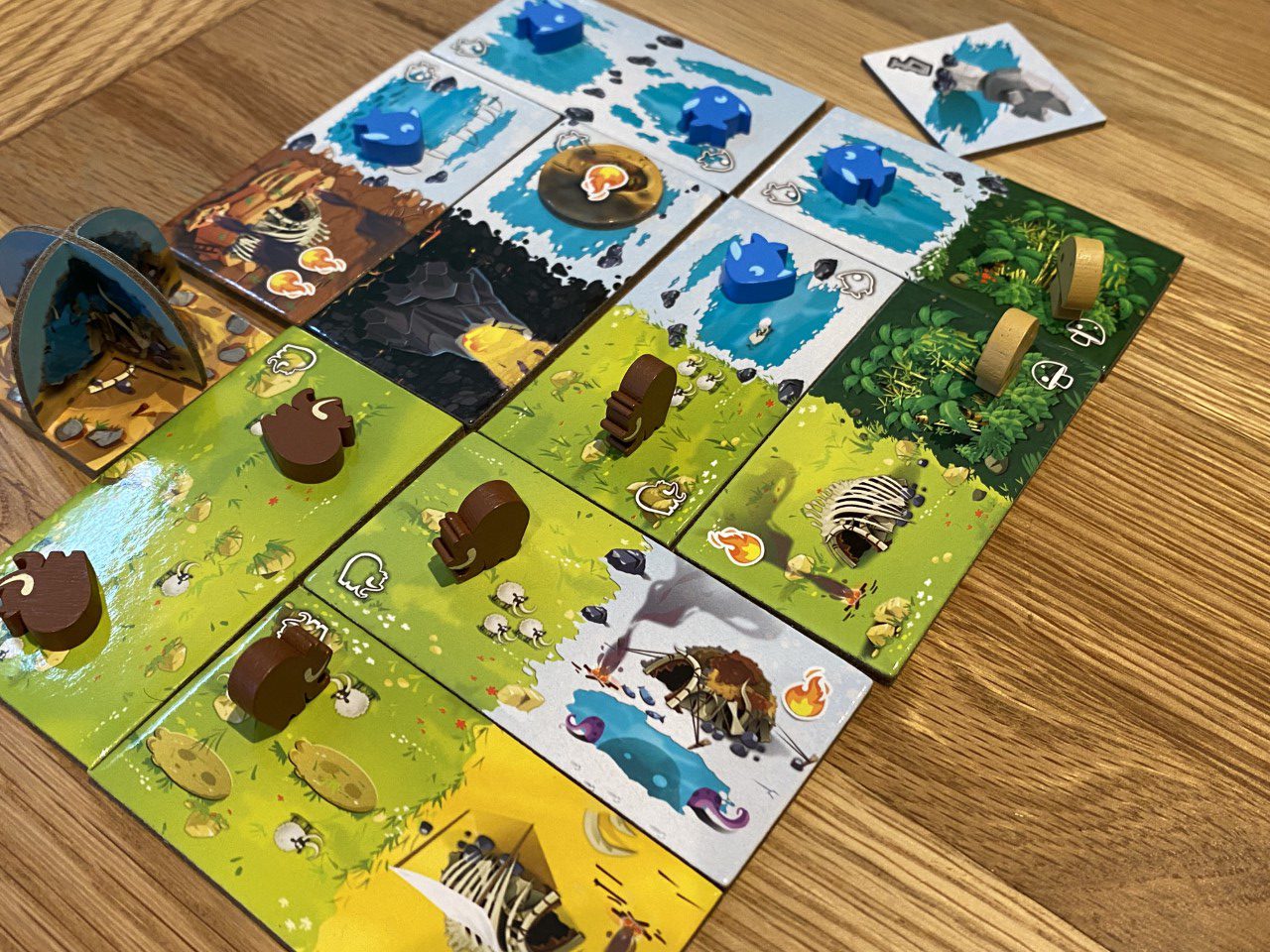 These three modes, in this order (Discovery, Totem, Tribe) present players with a layered and iteratively more complex experience that begins almost as light and simple as Kingdomino, (but better) and grows into something that is probably still gateway level, but definitely demands more from players in terms of decisions to make. This makes Kingdomino: Origins a damn near perfect family game because it covers players between four or five years old, right up to adult.

On the downside, I no longer feel I need Kingdomino or Queendomino because Kingdomino is now “too simple” (even though we do like Age of Giants) whilst Queendomino feels like it is more complex than Kingdomino: Origins, but without enough of a pay off to bother with. For me, the real sweet spot is Totem mode, since it works a lot like Age of Giants does with its “bonus tiles”. Both of these modes keep the focus on the core tile placement, with just a small diversion towards these off board scoring mechanisms that are unlikely to win the game for you, but might just tip a narrow loss over the edge to become a narrow win. 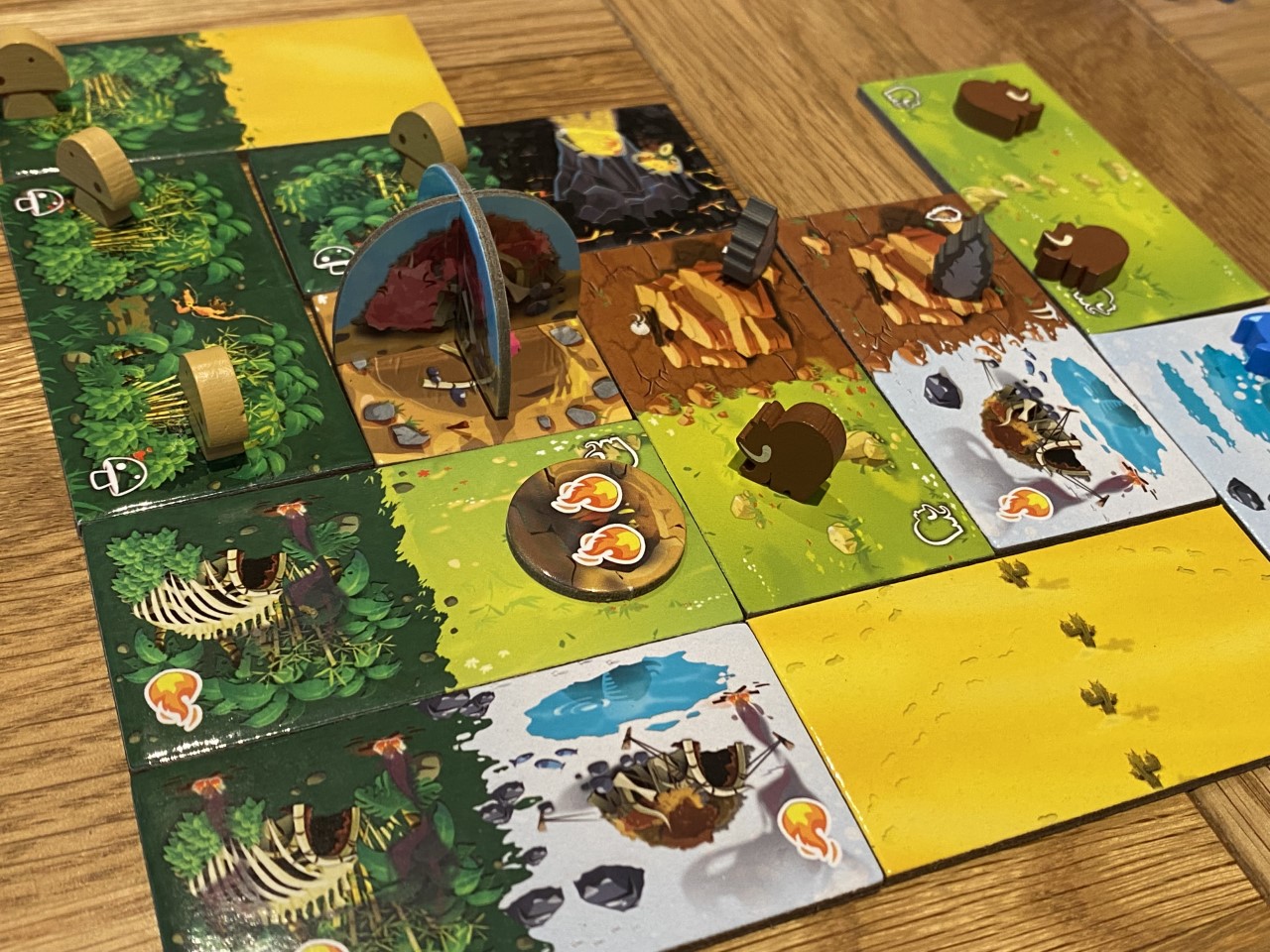 If you’re looking to get into Kingdomino in 2021/2022, then Kingdomino: Origins is most definitely the place to start. Equally, if you liked the original game but felt that it was just lacking that slight edge, I think Kingdomino: Origins will solve that for you. For me, this is a fantastic title, and almost certainly the best game in a very strong series to date.

You can find Kingdomino Origins on Amazon.