To be a Spiel Des Jahre (Game of the Year) winner, a game must be simple to teach and learn, fairly quick to play, and filled with fun, enjoyable decisions. Some luck can play a factor, but most winners of this illustrious award are about giving players agency and making them feel good about their choices. For me, Kingdomino is probably the perfect example of what a winner of the coveted Kritikerpries (critics prize) should be.

Kingdomino has hit my table at least once or twice a week for probably two years now, and it’s a game that my kids (now four and six) have always loved, even though they were (and still are) technically too young for it. This is a game which is so flexible that a three year old can play it, a five year old can win it, and an adult (me) doesn’t need to feel condescended to, whilst everyone still has fun.

In the base game, Kingdomino is simply a game about drafting tiles, placing them and maximising your score by creating large areas of the same kind of terrain (sea, forest, plains, desert, etc) which you will then multiply by the number of crowns in a contiguous area. A forest made up of four squares with two crowns in? Eight points. A sea of six squares with one crown? Six points. 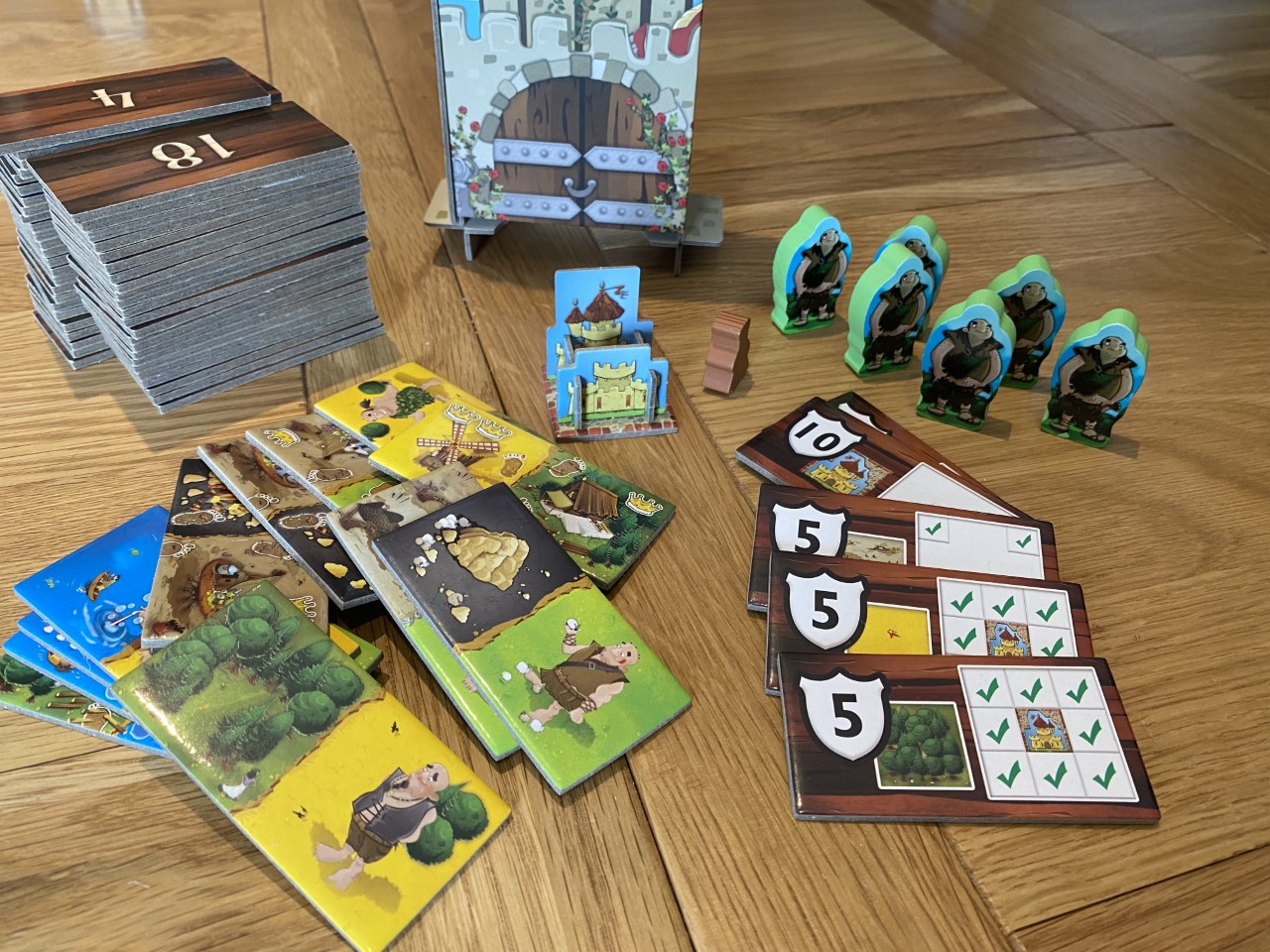 Tile placement is simple and as I mentioned above, even young children can play it because the act of placing a simple rectangular shape onto the table in a place where the bright, obvious artwork is a match, is easy. The fun part of Kingdomino is in the actual drafting, which is also simple to understand, but deceptively cunning in terms of the decisions it is secretly asking you to assess.

In simple terms and depending on player count, a number of domino tiles will be drawn and placed face up on the table. Following an initial random choice of first player, the players will choose which tile to draft based on the tile they drafted during the last turn. Each domino is numbered from low to high, and the highest value is placed at the bottom of the line of tiles. Choosing a weaker tile will give you an earlier choice on the next turn, whilst if you choose the last domino, then on the next turn, you’ll simply have to take whichever tile the other players leave.

This is, once again, very, very simplistic stuff. Even my youngest child can easily identify that the tile she probably wants is the one that matches a terrain she has, ideally with most crowns showing on it. She also (begrudgingly) understands that the lower down the stack her chosen domino is, the later she will act on the next turn. 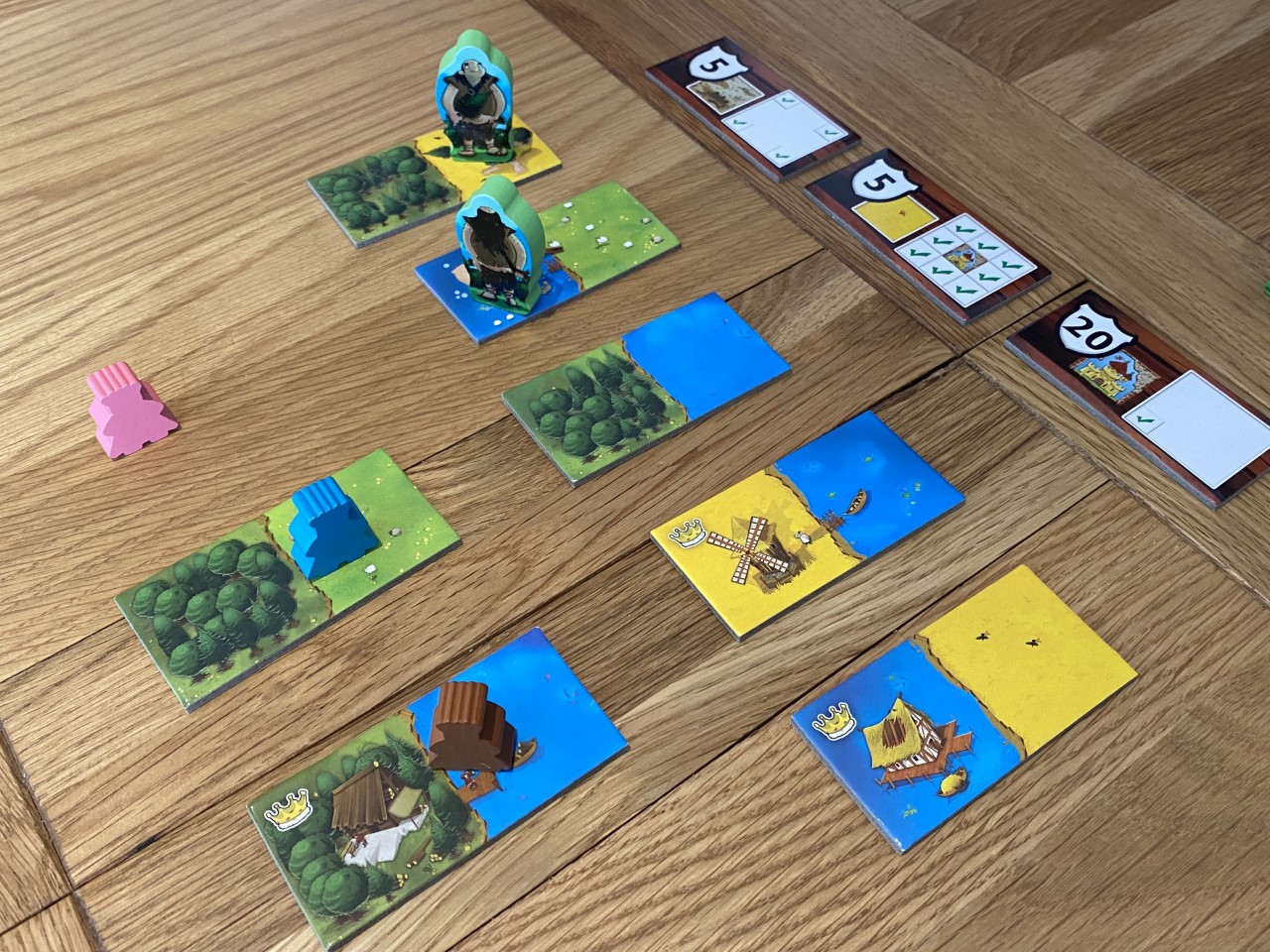 For such a simple decision, the drafting stage in Kingdomino is huge for young players, and it teaches brilliant fundamentals linked to assessing the board state of both their own kingdom and those of their opponents (yes, hate drafting in Kingdomino is a thing). It also helps young or inexperienced players learn how to make decisions quickly, and to plan for the medium to long term — something that I have found extremely difficult with children otherwise.

With such well-oiled fundamentals in place, I was a bit reluctant to introduce Kingdomino (and sister title, Queendomino)’s latest expansion — The Age of Giants – into the mix. The Age of Giants brings six wooden giant meeples (with lovely printed artwork), twelve new gameplay tiles, a load of new “objective” tiles and a magnetised cardboard domino tower that fits both the original and new domino tiles within, when playing.

That’s not a lot, really, but the changes that The Age of Giants makes are very interesting — stretching those core game mechanics just a bit, but keeping them well within reach of players who have a bit of time playing the base game under their belts. There are two key aspects to the expansion in terms of what it does, with those being the giants themselves, and then the new objectives. 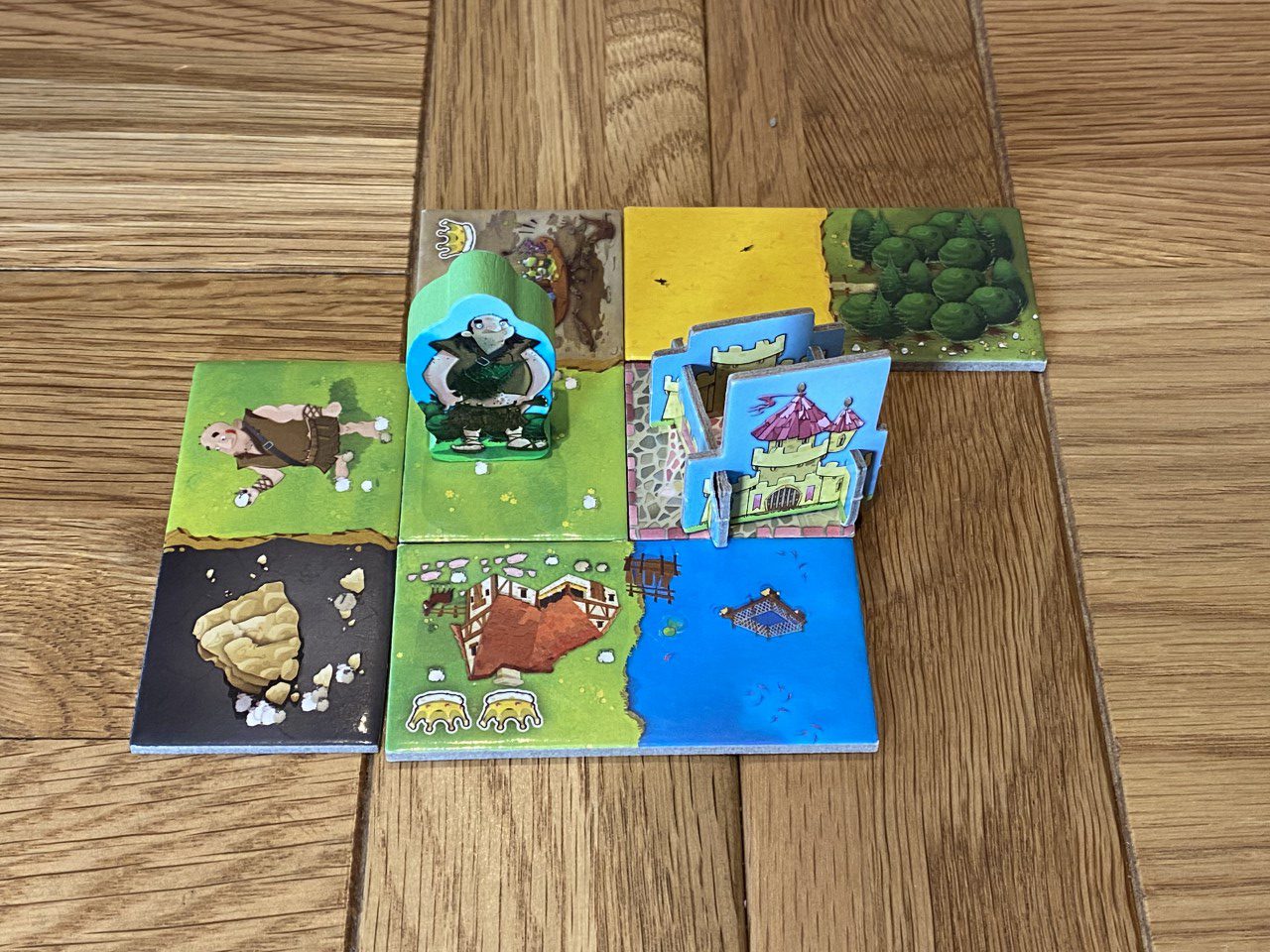 The new objective tiles are super, super simple and just introduce new ways to score, usually at the end of the game. For example, one will give a player five points for each tile you have to discard because it cannot be placed (something you don’t normally want to do). Several others will score the player up to five points each for every tile of a specific terrain that surrounds their capital, or five points each for every terrain of a certain type in each corner of the kingdom. None of these are complex, and you can play with none, one or more – whatever suits your group.

The giants are slightly more complex and they add to the drafting step I mentioned earlier, changing it in two ways. Firstly, you’ll shuffle in the twelve giant tiles along with those from the base game, and then place the whole lot inside the tower. Next, you’ll draw tiles based on player count (as normal) but the amount you’ll draw is increased.

You will then place the tiles down with the new “lettered” tiles going before any numbered tiles, and the new numbered tiles being placed in the normal number order (all new numbered tiles are higher than those in the base game). You’ll then remove a number of tiles and discard them for this game — in a three player game, you’ll draw five, then discard the second and fourth drawn. 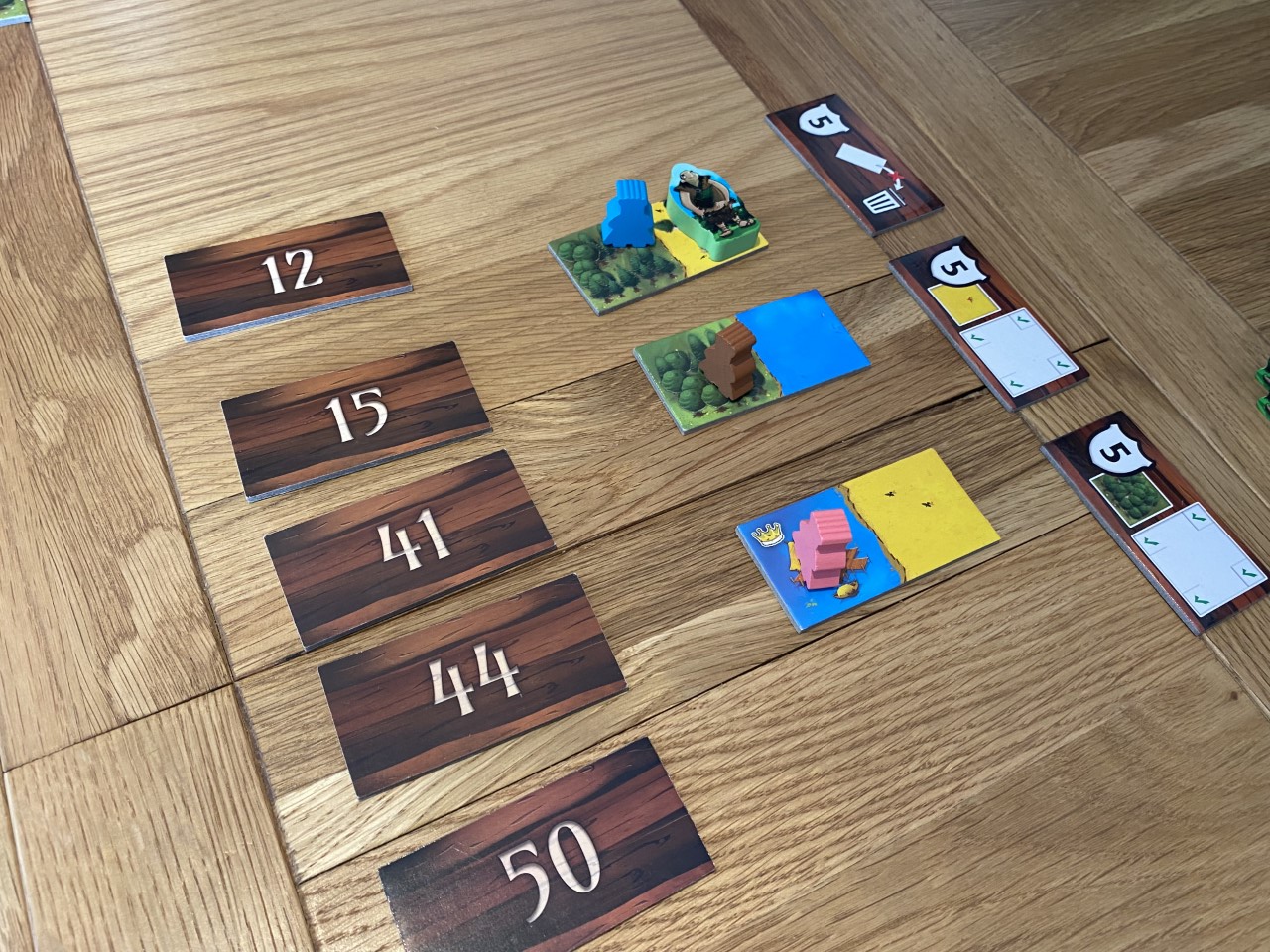 In this way, it’s pretty uncommon to have more than one of the new lettered tiles and one of the new high number tiles on the table at the same time (however it can happen). You’ll also have some variability in the base game tiles, because over the course of the game, a number of them are definitely going to be discarded so that no one can place them into a kingdom.

To make sense of this, let me explain those new cards. The six lettered tiles each show a giant, and when a player takes one, they must also take a giant meeple and place it onto their board, covering one of their crowns (they can choose which one). If that’s where the giant finishes the game, then that crown won’t score during the final count. On the new, higher numbered cards, you’ll often find a fair few crowns, but you’ll also find some giant footsteps as well.

When a player places one of these tiles into their kingdom, they may then move a giant of their choice, from their kingdom to that of any other player — who must then place said giant on a crown of their choice. What this means is that taking a giant voluntarily will usually give you the first choice in the next round at the cost of covering a crown, but it’s also the main way in which you can gain a giant to then send to an opponent. Giant footsteps, on the other hand, are fantastic in every way — especially if you have a giant already — but you’ll almost always act last on the next turn, and if you don’t have a giant, any footsteps you take are lost. 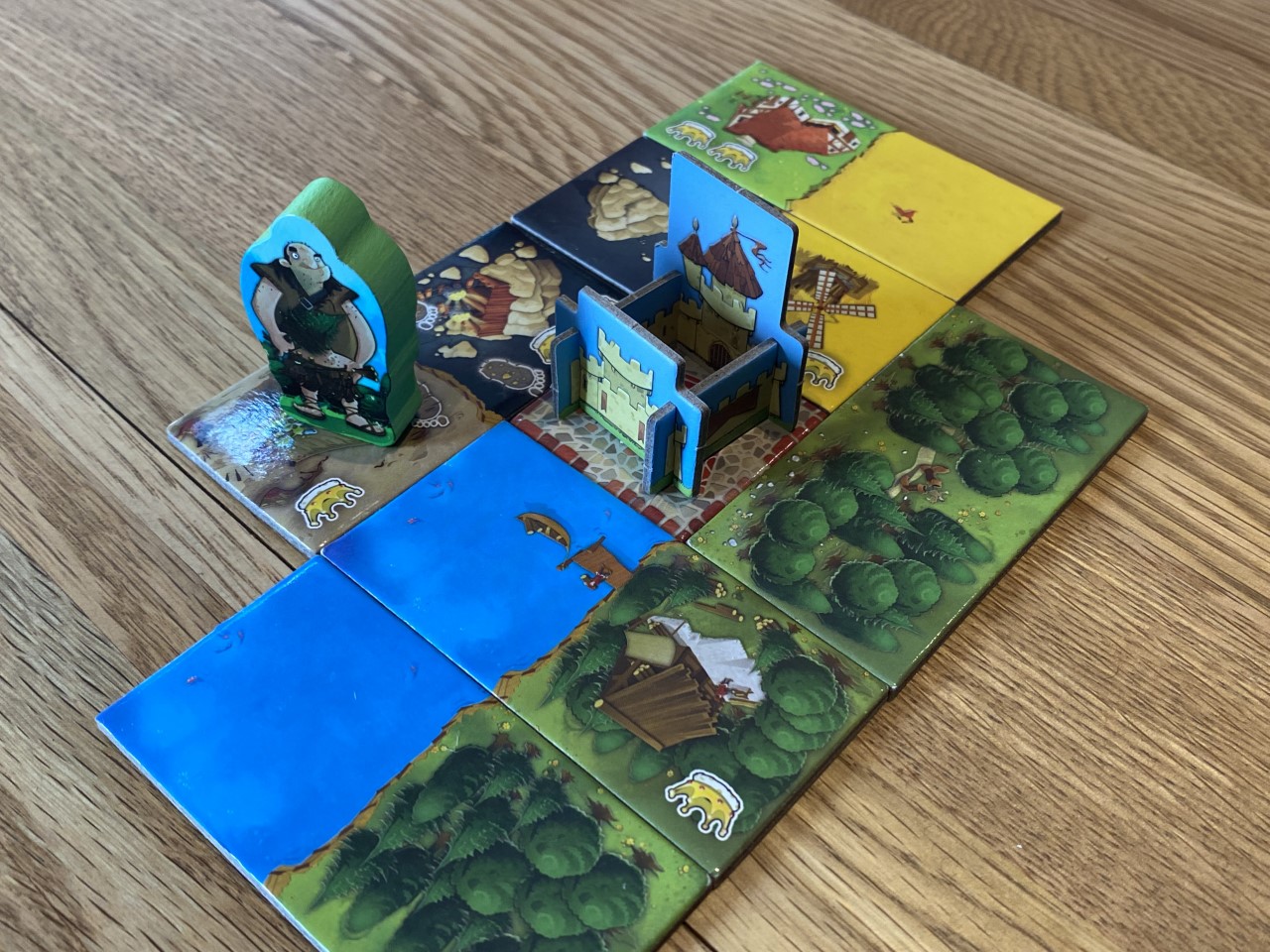 Because both of these modular expansions are so simple, they really do work. Both of my kids, possibly because they are Kingdomino veterans, really took to The Age of Giants expansion, and now I can’t see us playing without it. In terms of complexity, playing the original game with The Age of Giants is still less complex overall than Queendomino (which my kids keep asking to play) but it definitely helps ramp into it, and it’s giving me the confidence that they are getting closer to that next step up.

The Age of Giants is a smallish expansion that just adds a couple of nice new features to an already fantastic game. There’s nothing revolutionary in here, but with one module that affects placement and the other touching on the drafting side of things, there’s enough of a change in both respects to draw the interest of any keen player. For us, The Age of Giants is a near-certain inclusion in all our games, and the fact it is compatible with Queendomino (once we get used to the basic version) is the icing on the cake.

You can find Kingdomino at any friendly local game store, or if you prefer mail order, why not buy directly from the publisher, Coiledspring.