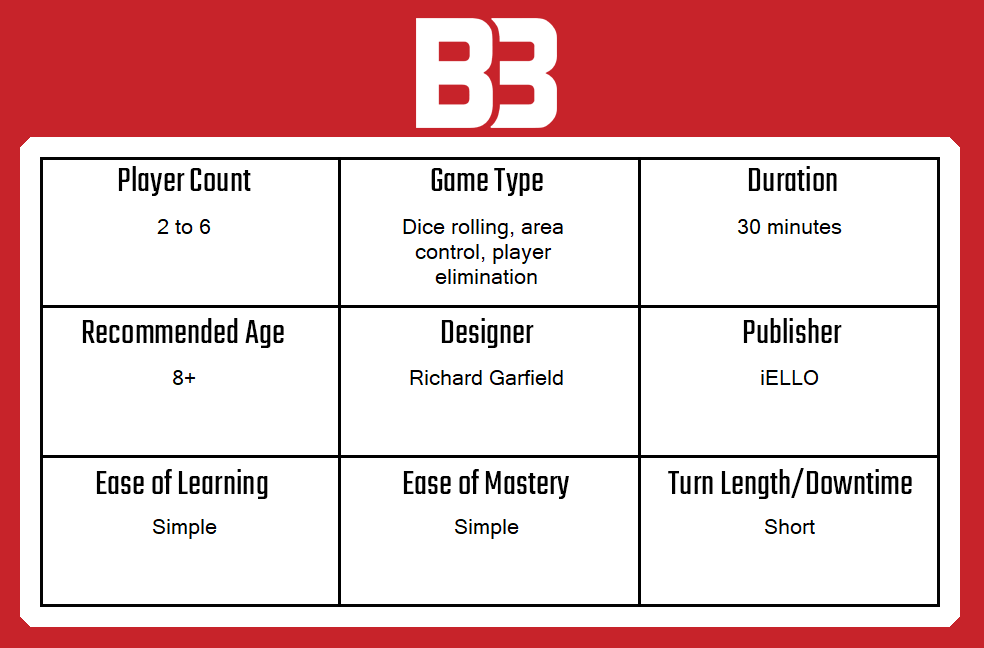 In King of Tokyo, players take on the role of mutant monsters, gigantic robots and strange aliens. All of these strange, imaginative creatures must destroy the city (by collecting victory points) and whack each other in order to become the one and only King of Tokyo. But with player elimination and a whole host of unexpected power-ups, you never know who’ll survive to see things through to the end! 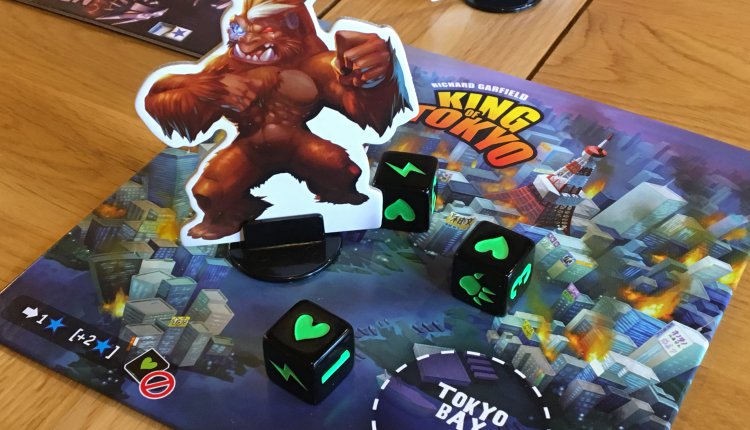 King Of Tokyo is a dice-rolling game from Richard Garfield which usually begins as lighthearted fun and ends in a blood feud that will last for a thousand years. Two to six players each take control of a huge monster, which they then use to stake their claim on the city of Tokyo. The ultimate goal of the game is to either amass twenty victory points or reduce the health of every other monster to zero.

King of Tokyo is played with a single board that has just two spaces, only one of which is used with anything less than six players. Any monster that spends their entire turn in Tokyo will gain two victory points and they’ll be able to attack every other monster simultaneously. On the downside, every other monster will hit them on every turn and once in Tokyo, there’s no opportunity to heal.

Luckily, whenever an opposing monster attacks the current occupant of Tokyo, they have the opportunity to vacate the city and swap with the attacker. Remaining in Tokyo is a push-you-luck mechanism which lets players gamble their health for victory points, but it can prove costly if it results in an early demise — player elimination is a feature in King of Tokyo. 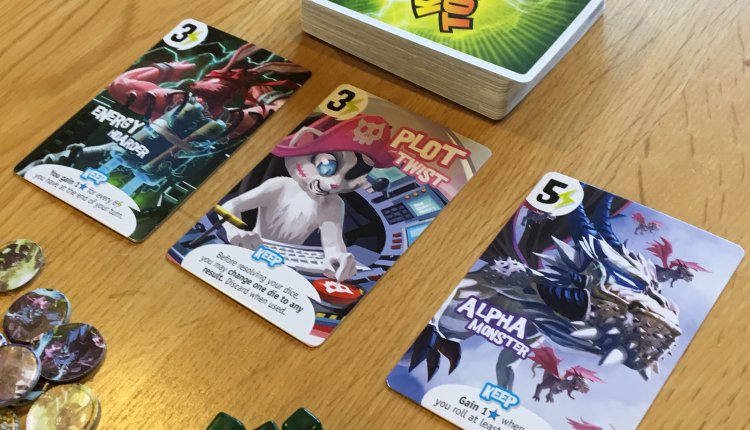 One of the best things about King of Tokyo is that it comes in a fairly small box, available at a sensible retail price. As a result, the components are simple but effective. The main attraction is undoubtedly the eight (six standard and two bonus) over-sized dice, each of which is customised specifically for the game and has a fantastic weight when rolled.

The board is a basic but nicely illustrated piece of card, whilst each of the six monsters is represented by a gorgeous and highly characterful standee. There is also a bag of green cubes that represent energy, which in turn pays for power cards. The deck of power cards is what elevates King of Tokyo from simplistic fun to something far more compelling — both really well made and filled with inventive ideas that I’ll get onto shortly.

Each player is also given a health-and-score-tracking card which features a spinner for each. These are a really nice, unusual inclusion which is both cost effective and neater than using cubes or similar. There’s even a brief, colourful and effective manual to finish things off — it doesn’t take long to pick up King of Tokyo. 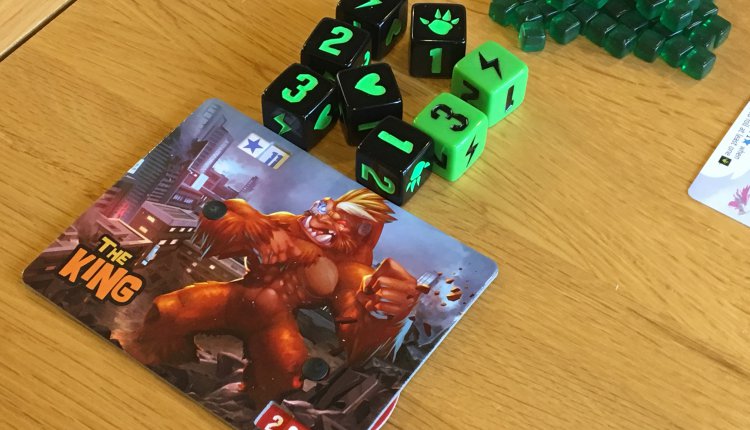 Each turn begins with the active monster rolling six dice. Some faces are hits, some show energy symbols and others show hearts, which heal. The other faces show numbers one to three. Players may roll three times, saving any dice they wish to keep before each roll. After up to three rolls, the dice faces are resolved.

Heart symbols heal one health each up to the maximum of ten, whilst energy symbols accrue that many energy cubes for the player. Hits either damage the monster currently inside Tokyo or, if that’s you, they hit every other creature. Any set of three numbers will score that many victory points plus one for each additional die showing the number (so four rolls of three would score four points, for example).

Once the roll is resolved, the player may choose to spend her energy on one or more of the three face-up power cards, if they can afford it. Power cards almost always feature game-breaking bonuses that occasionally come with some sort of downside. Combining these powers to create your ultimate monster is really what King of Tokyo is all about. It’s adding laser vision to King Kong and then proving, categorically, that such a combination is better than an armour-plated Godzilla. 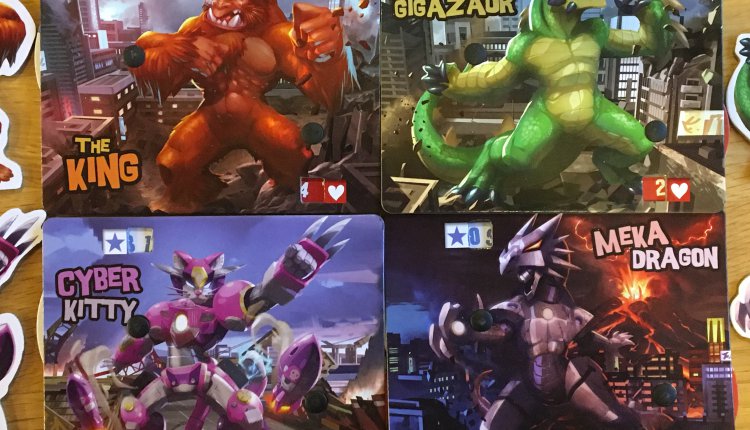 From the very first dice roll, King of Tokyo is an addictive, exciting showdown between increasingly more engaged players. Winning or losing is only occasionally related to who played best, but there are enough influencing factors between the dice rolls and power cards to make it feel like player decisions have a significant impact.

Even if that’s not a feeling you get from King of Tokyo (which would surprise me), you can’t fail to have fun when playing it. This isn’t the next Lisboa or Viticulture; it’s a fast-paced, rip roaring bout of knockabout fun to ease your friends into an evening of gaming, or even to lighten the mood at the end of something heavier.

The inclusion of power cards is what really allows the game to develop a sense of individuality, where it might otherwise have been too focussed on lucky dice rolls. Skills like Energy Drink, which introduce extra rerolls, or Parasitic Tentacles, which allows you to mess with other players’ cards, are seriously impactful — there’s very little filler among the deck and it is actually rather large. 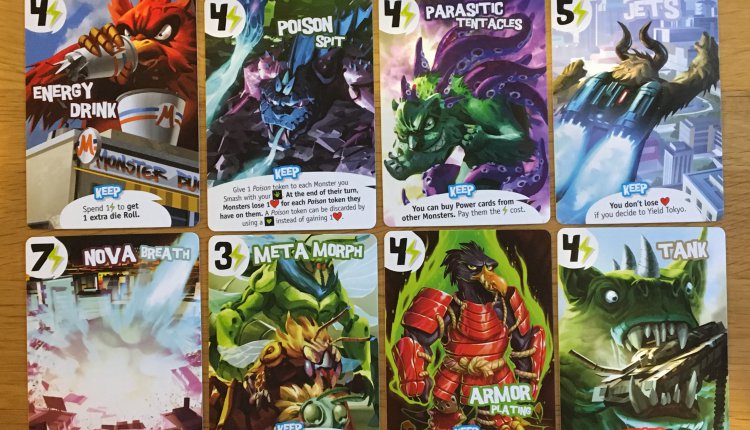 King of Tokyo has been out for years now and there are numerous expansions and alternatives, but it remains a formula that is yet to be beaten by any imitator. With the recent disappointment of Dwayne Johnson’s awful Rampage movie, video game fans looking for their giant monster fix could certainly do worse than to get it here — especially with several friends and a couple of beers on a lazy Saturday afternoon.

You can find out more information about King of Tokyo on the website of publisher iELLO Games. They also maintain a list of stockists.