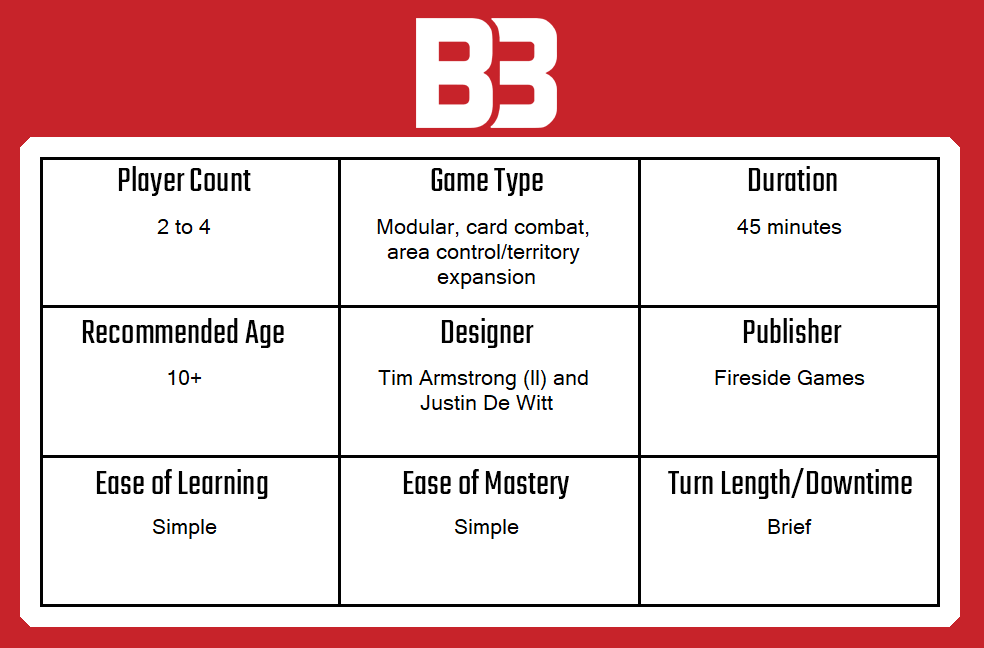 If you’re a fan of movies like Pacific Rim and Rampage, not to mention the classic Godzilla movies, then Kaiju Crush might just be the board game that you’ve been waiting for. With its randomised, modular setup, unusual approach to movement and rock-paper-scissors style of combat, Fireside Games’ take on the classic monster mash up is quite an interesting beast.

Kaiju Crush is a game in which two to four players each take control of a giant monster, who must then smash their way through a fictional city that comprises of a highly variable board, made up of numerous square cards. Each of these cards represents a different kind of building or structure and is worth a specific number of points, making some targets more attractive than others. Each game a couple of shared objectives will be drawn from a deck of six, which can lead to bonuses for destroying buildings of a certain type, or winning fights, for example.

The board size will be chosen based on the number of monsters, whilst the starting location of each player will be determined based on a partially random setup sequence that aims to place everyone a reasonable distance apart, with no specific advantage. Movement around the board is different almost every turn, since each player holds a movement card and has access to one shared card (so two kinds of move are available to them. Whenever the card they hold is used to move, it will be swapped with the shared card, so in a four player game, there is more or less a constant churn. Each kind of move is fairly straightforward, with most moves allowing monsters to move a single space in several directions, or a number of spaces with less fine control.

When monsters end up on the same space for any reason, then a fight will break out. Each monster has their own deck of dual-purpose fight cards which show their attack type on one side and their symbol on the other. The symbol side is used to replace “smashed” city tiles, whilst the attack side is used in combat. Kaiju Crush uses a system based on trumping and each card shows a type of attack (for example, claws, tail or fire breath.) Each of the monsters win certain ties and is more powerful against some attacks and weaker against others. After a best of five showdown, the victorious player claims a victory point token worth one to three points, adding an element of surprise to proceedings.

The end of the game is determined once no monster can move (bear in mind that no smashed space can be revisited.) When that happens, players will score their total number of points across the city tiles that they have accumulated (smashed) and the battles that they have won. Public objectives will be taken into account as well and whilst I didn’t find them to be overpowered by any stretch of the imagination, they can have a significant effect on the outcome of the game. It helps that everyone can see them, so at least there’s no chance of an unpleasant surprise. 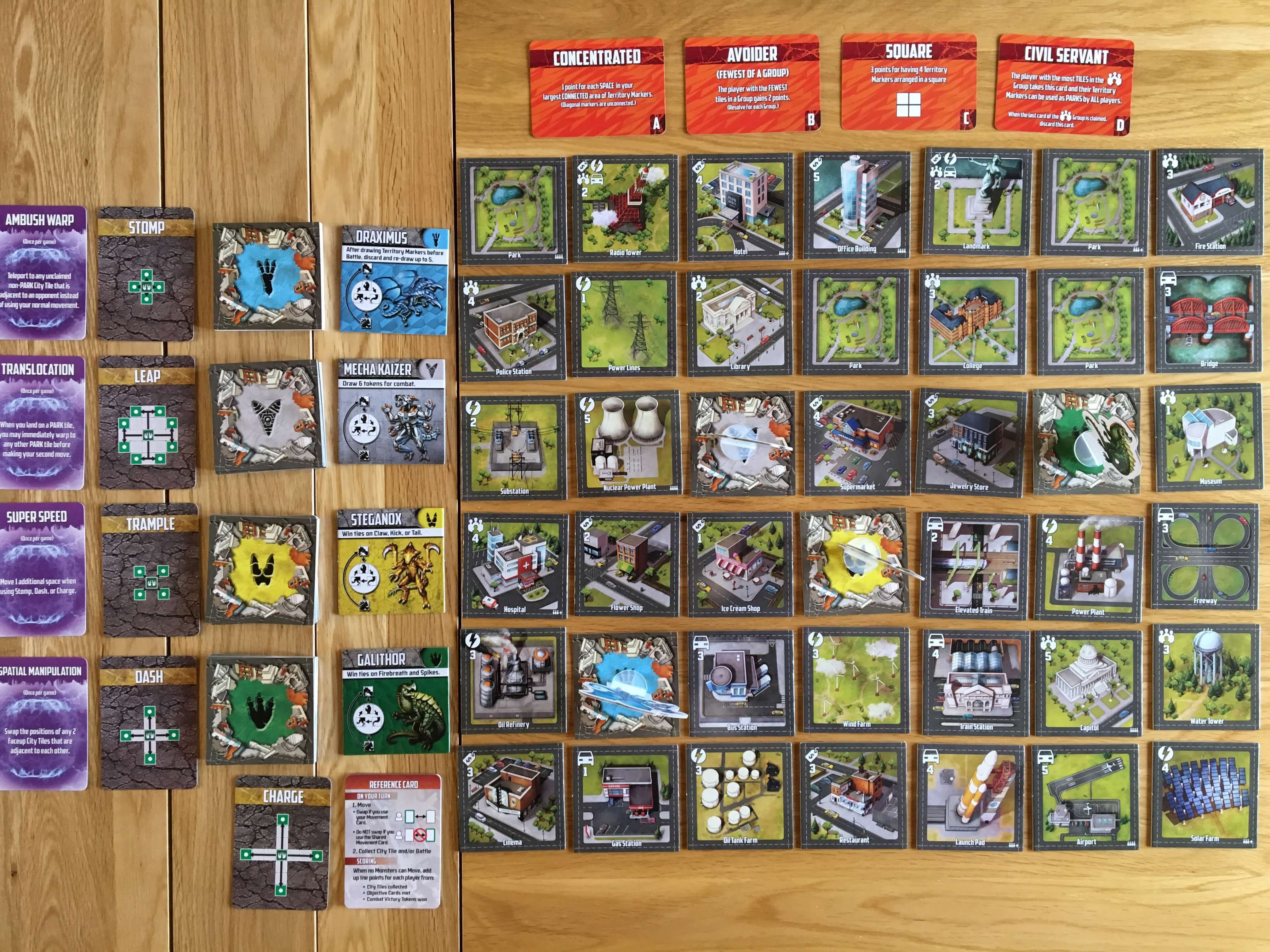 The pieces that make up Kaiju Crush are fairly plentiful and there’s lots of colour among them, but much the same as the other Fireside Games products that I’ve reviewed (Remnants and Hotshots) the actual component quality is perhaps what you might call average. Nowadays, I think average is a bit of a dirty word when it comes to board games because of the massively overproduced products from CMON and the like, but in fact, I don’t see it as a bad thing. Kaiju Crush has no miniatures or plastic components to drive the cost up, so whilst everything is made from medium grade cardboard, it’s perfectly functional.

In the box, you’ll find about forty reasonably thick city tiles, including one for each of the monster starting locations. You’ll also find five movement cards, thirteen special abilities and six objectives, each of which are broadly the same size and thickness as standard playing cards. You’ll also find a deck of control/combat cards for each monster, which are square and sadly, nowhere near as thick as the city tiles that they replace. The images of claws, kicks, spikes and so on that adorn the front of them are also a bit basic, although they are extremely functional which is always the main concern.

There are four monster standees featuring full art and cut to shape, which adds a third dimension to Kaiju Crush and offers a cost effective alternative to miniatures. I’m also delighted to report that Kaiju Crush uses player aids to assist players, which is something I wholeheartedly appreciate in any game. The manual is fairly well laid out and clear, with a fair bit of detail and examples of how play works in practice, which certainly helps players learn the way that Kaiju Crush plays fairly rapidly. It’s not a complex game anyway, but the way movement and combat is handled are both fairly unique, so this level of detail is useful. 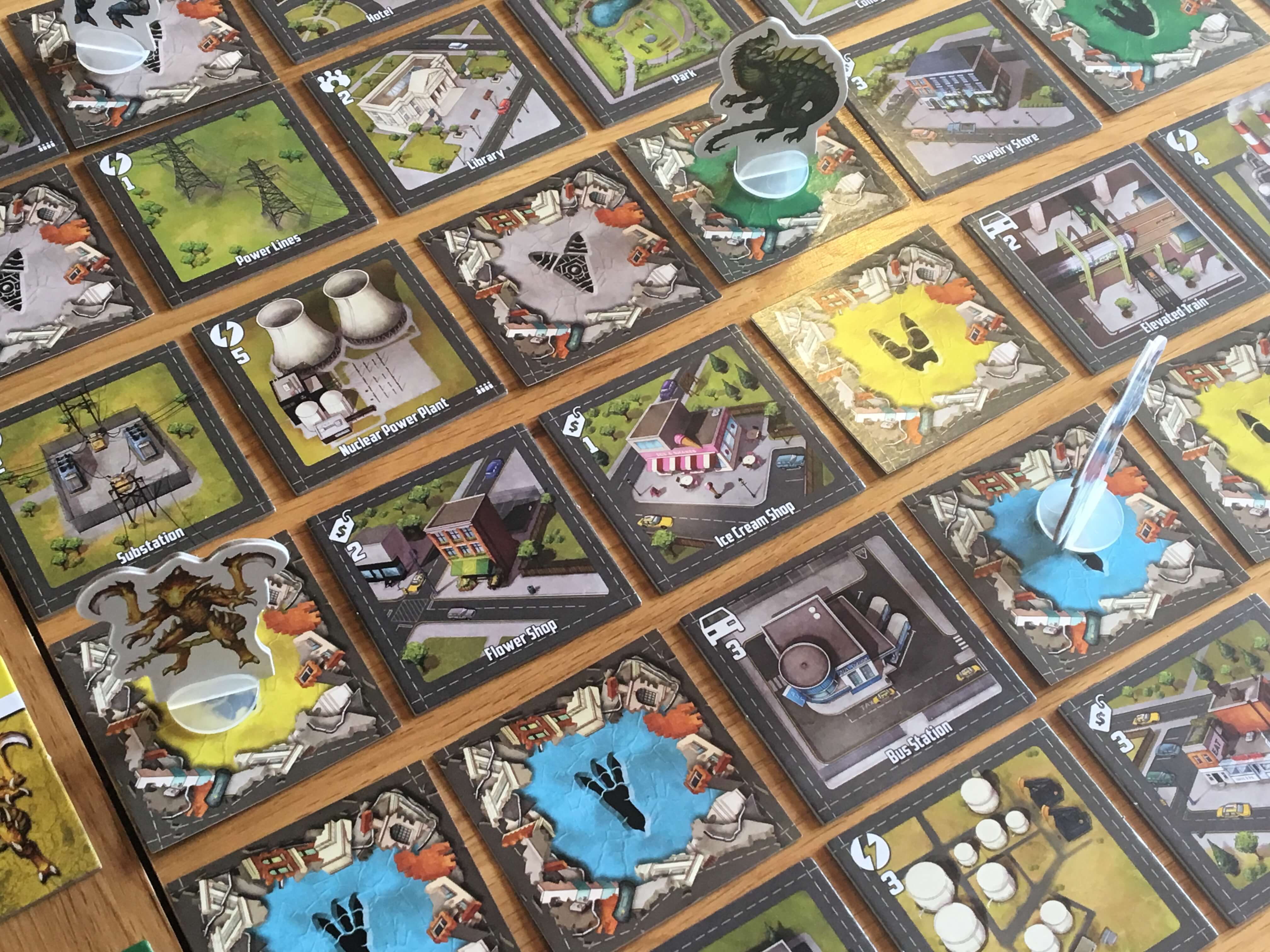 Principally, Kaiju Crush could not be more straightforward or brief in terms of how a turn plays out. The active player simply uses either the shared movement card or their own and moves their Kaiju in accordance with the move chosen. Leap, for example allows a monster to move like a knight in chess, whilst stomp allows the monster to move one space horizontally or vertically. The intention with this approach is to force players to think about which area they want to move to and then to anticipate what movement cards might be available to them — easier said than done in a four-player game.

Under most circumstances, the player will land on an unoccupied city space that she will then collect and replace with one of her own territory markers. Her Kaiju will sit on top of that space until the next turn. The exceptions to this are when a player lands on a space either occupied by or adjacent to another Kaiju, which either forces a battle or allows the player to initiate one respectively. Battling is a risk strategy, but it can certainly be worth a few points over the course of a game and if you do land on a space occupied by someone else and defeat them, then you’ll swap their territory marker for your own.

In the event of a battle, then things do get more complex, but not materially so. Each player will draw five cards from their territory deck (or six if you play as Mecha Kaizer) and will then engage in best-of-five combat based on a trump system featuring five symbols. In short, firebreath beats any of claw, tail or kick, whilst all of those beat spikes, which in turn beats firebreath. Some of the monsters break ties, whilst in all other circumstances, a tie counts as a loss for both players. After either five rounds of combat (or an unbeatable majority) is reached, the victorious player claims a token and, if both monsters were occupying the same space, the losing monster is evicted.

Play then continues in this way, with players swapping movement cards and using them, picking off city spaces in an effort to work towards the highest score — which may or may not involve targeting one of the shared objectives. As the board closes in, combat becomes more frequent and players are forced to compete for the same spaces. Play usually ends with a handful of spaces unclaimed, simply because nobody’s movement card allows them to reach it. At this point, the game ends. 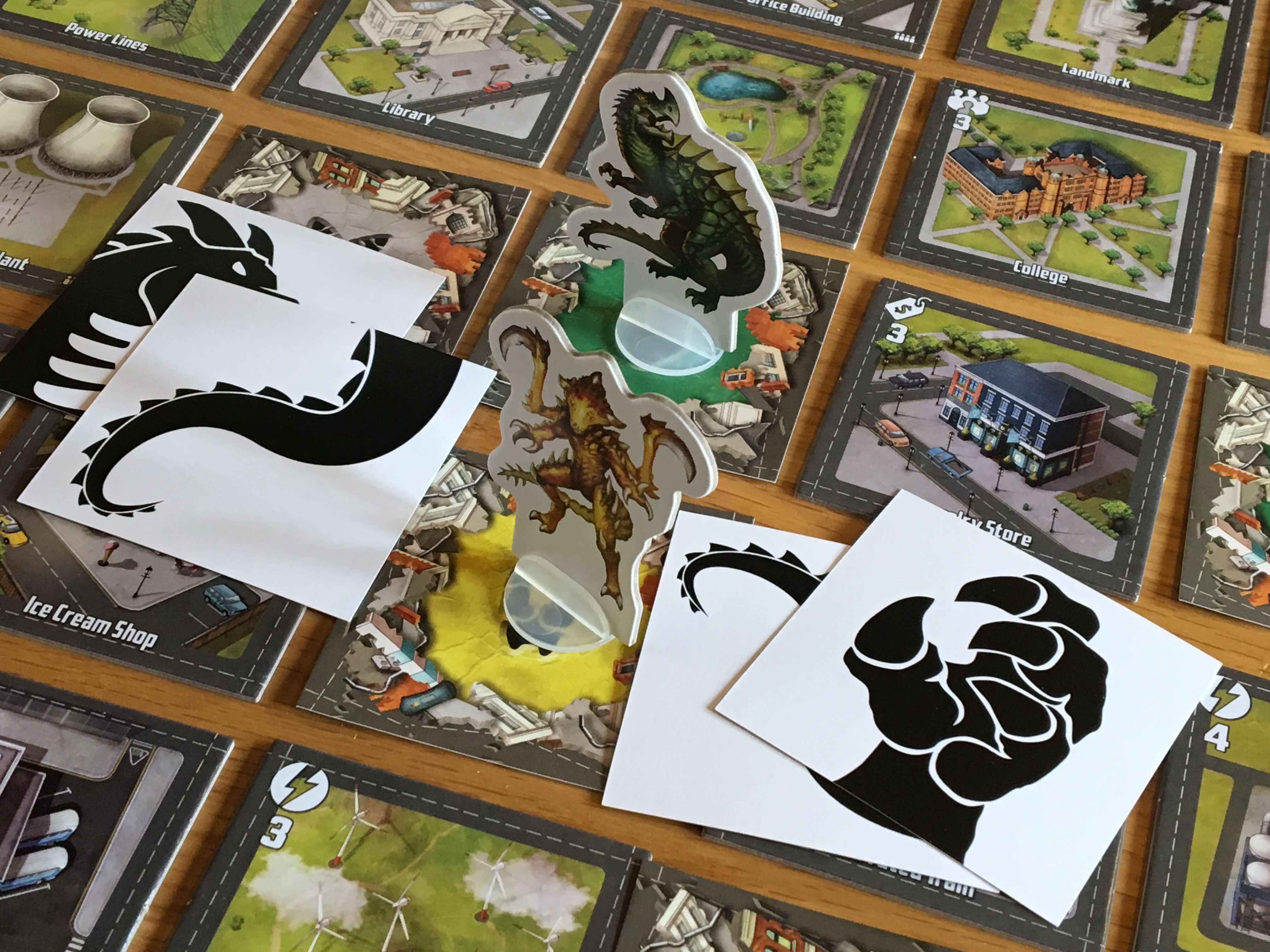 Kaiju Crush feels fairly light from the outset, with a very casual style that works well with the fast turns and simple scoring. Despite its lightness, Kaiju Crush is not lacking in opportunities for either tactical or strategic thinking. Planning a route to score the locations that you want to is challenging since you’ll never know what movement cards are going to be available to you, but it is possible to mix opportunistic use of shared movement cards with more carefully planned use of your own.

The movement of monsters in Kaiju Crush is pretty unique in my experience and I’ve never seen the concept of shared movement cards like these before. It’s not a perfect system, but it’s interesting and fun. Also unusual, and implemented to a good standard, is the combat system. There’s nothing especially groundbreaking about using a trumping system similar to rock-paper-scissors, but even so, it’s unusual to see it as a sub-mechanism in a larger game. What I think is most interesting about Kaiju Crush is that it takes these two unusual systems and delivers them on theme and without any real complexity — that’s quite an achievement.

Ultimately, the variability in Kaiju Crush comes from the way the board is setup, which objectives are drawn and which special powers are given to which monsters. This, unfortunately, doesn’t lead to a huge amount of deep replay value, but it does mean that Kaiju Crush always has thirty minute to an hours worth of throwaway fun up its dragon-skinned, cybernetically enhanced sleeve. 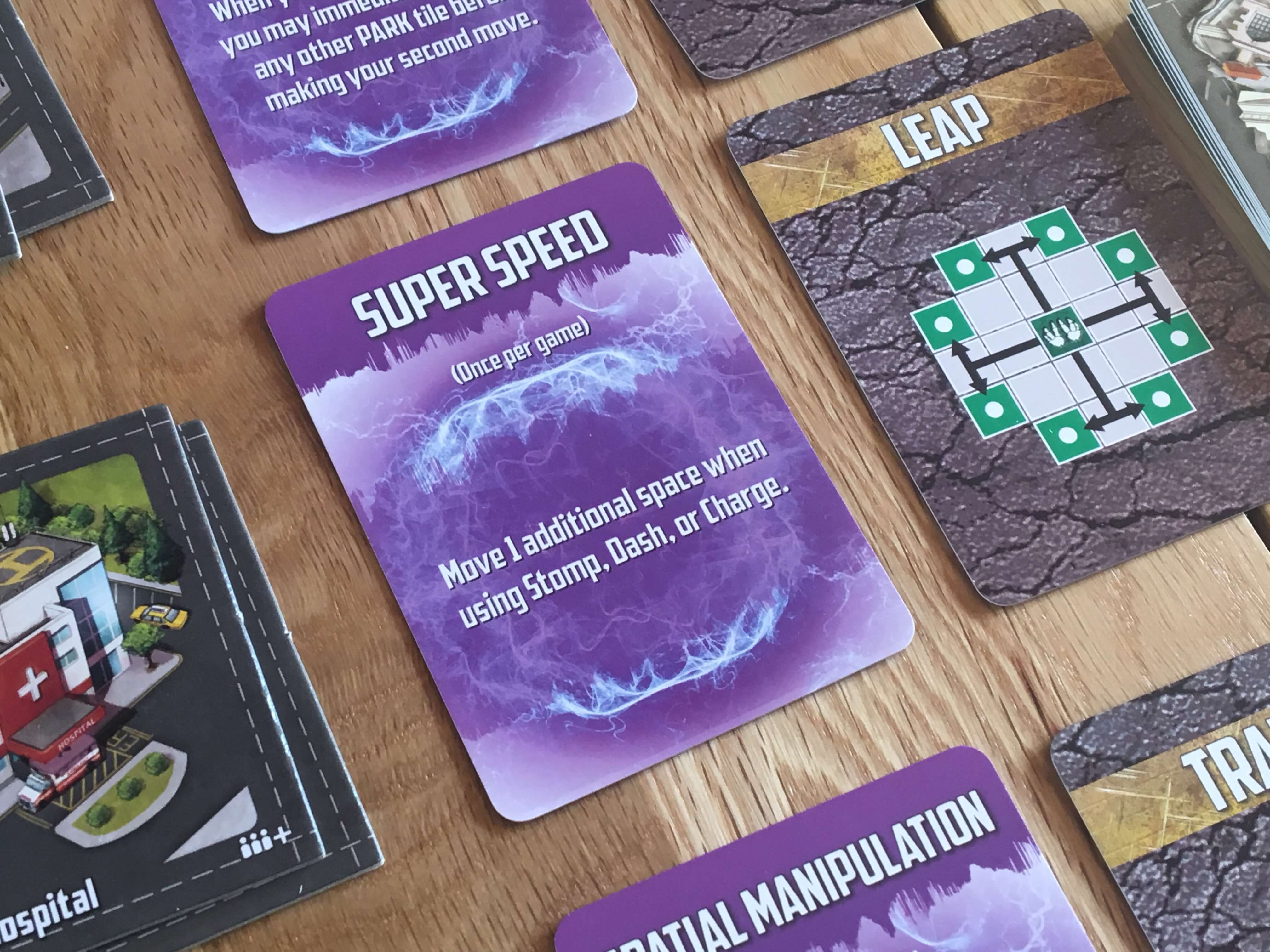 Kaiju Crush probably isn’t for everyone, but it’s also quite inexpensive and very appealing as a lightweight game that offers something a bit different to the average filler. It reliably lasts for an hour or less regardless of player count and it’s never quite the same exact experience twice (even though it is always similar.) Kaiju Crush is simple to teach and I can see it as an excellent game for children around age seven to twelve or thirteen years. Credit must be given for games that offer simple, straightforward fun in a neat little package — Kaiju Crush does all that and it still manages to innovate in its own way.

A copy of Kaiju Crush was provided for review purposes. You can find out more about it on the website of publisher Fireside Games.