There are many things we humans like to do, over and above the basic needs of Maslow’s hierarchy. His original theory suggests that once the need for food, water and a safe environment are fulfilled, we can move up a sort of pyramid to more conscious requirements like affection, fulfilment and play. It would be no surprise to Abraham Maslow, then, to see that people today often choose to combine their creativity and love of play with some of the more base needs to eat, drink and survive. 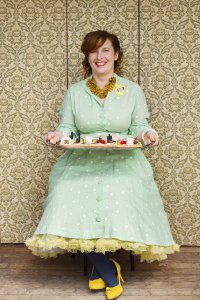 Jenn Sandercock’s exciting and ambitious Edible Games Cookbook (live on Kickstarter until July 20th) looks set to deliver all of these things and more by combining some of the most exciting social experiences in modern life. From cooking and baking with family and friends to playing games and ultimately sharing food together, the possibilities that the Edible Games Cookbook opens up are varied and rewarding.

As a keen gamer and moderately successful kitchen aficionado, I wanted to know more about the Edible Games Cookbook as soon as it was announced. I was therefore delighted to be offered the opportunity to speak to Jenn about her plans for the book, as well as what inspired her. Jenn is already a successful video game designer, with credit for the exceptional Thimbleweed Park to her name, so I also took the chance to ask a few questions about making the jump from one medium to another. 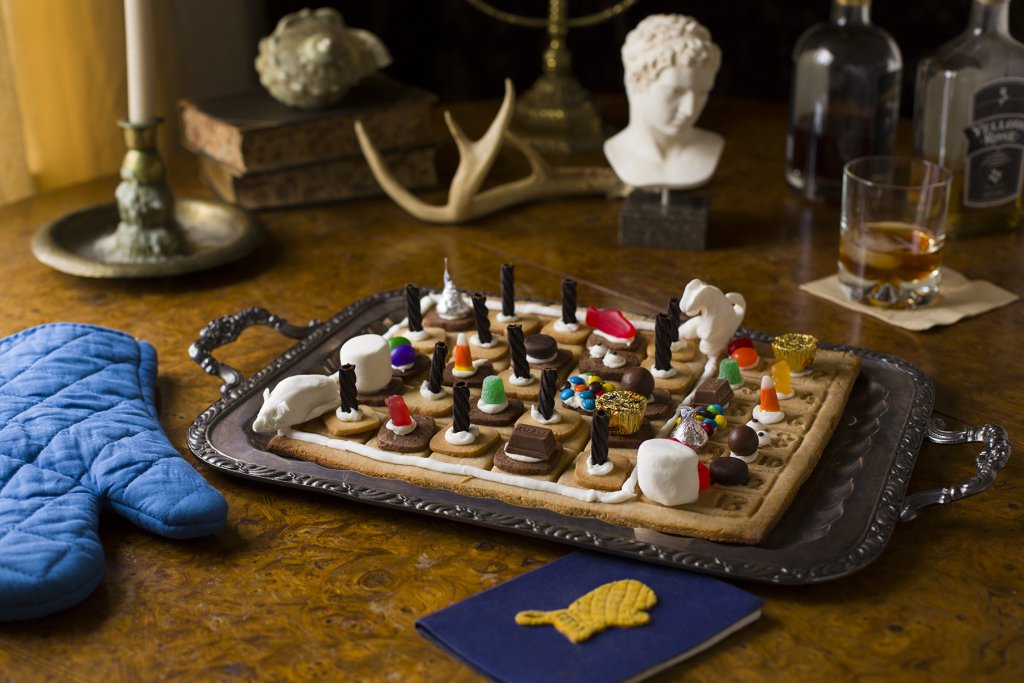 Matt: Given your work on Thimbleweed Park (which is clearly a retro-style point-and-click), does your desire to make board games come from that same era (i.e did you enjoy physical games before video games were really popular and if so, which ones inspired you to create)?

Jenn: I did enjoy physical games from when I was very young. I especially loved Clue (or Cluedo as it’s called in Australia) and Trivial Pursuit. However, most of my inspiration from edible games comes from experimental games, alternative controller games and a group I was part of in San Francisco called ‘Come Out & Play’. I was exposed to a lot of people making interesting games that were either purely physical or had a hybrid with digital. Many of these games were physical in the same sense as sport is physical, so very far removed from sitting around a table and playing.

M: And how did your love for baking come around when did you decide to combine those passions?

J: Baking and cooking is something I’ve pretty much always done on the side. It’s something that I’ve found helps break the ice and helps me make friends. I’ve often used my interests outside of games to inspire new games (like my love of dancing). When I started making edible games for friends the reaction I received was so positive that I decided to keep making more. 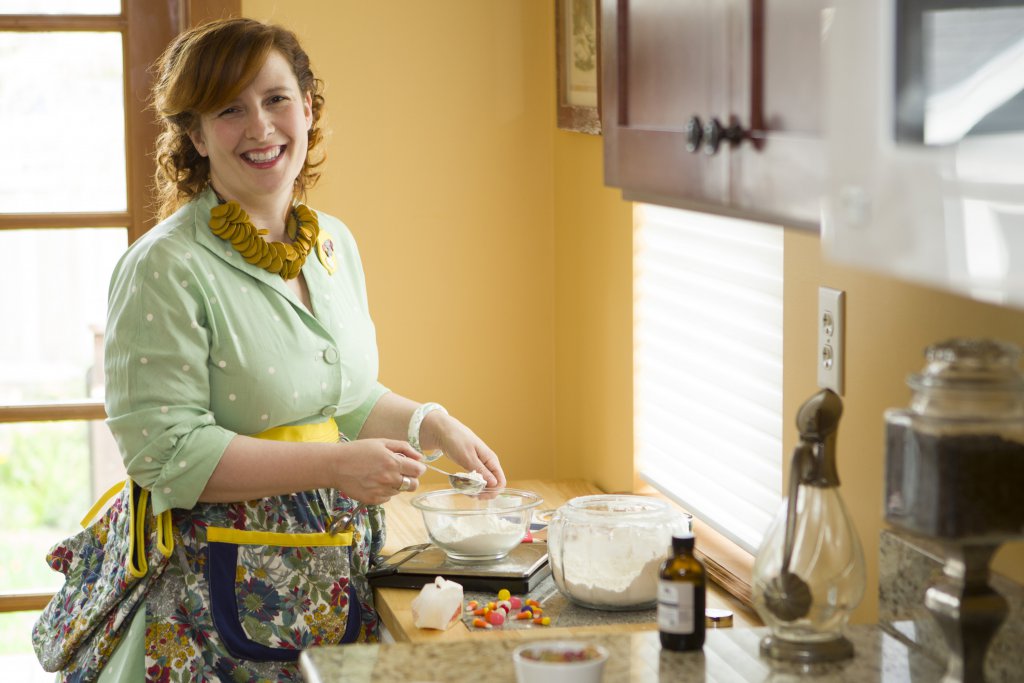 M: Is it more challenging to make food-based cookbooks than it is to create a game?

J: Both have their own unique challenges. Both require some amount of testing with outsiders to make sure the recipe/rules are understood and work in different settings. If you’re making a pure cookbook, I think that’s something that’s a lot more well known so people know timelines and the structure for that. If you’re making a game, it can go in a lot of different directions and can be harder to estimate how long it will take to create.

For me, I’m making both a cookbook and a game. In fact, I’m actually creating twelve games. Not only do I have the basic challenges of creating a cookbook and a game, but I’m also making sure that all twelve games stand up on their own and that there is a variety among the games. I’m also adding both recipe and rule variations so that people can create games that suit them and their group.

J: For video games the main reward that people want is a digital version of the game. In this case the main reward is a heavy 300-page book. The cost of manufacturing and shipping the book is a large portion of the funding goal. Also, in many video-game Kickstarters people can buy the released game on Steam or some other platform after it has been released. I have no current plans to keep selling the book after I have shipped it to backers, so becoming a backer is the only way to get the book. 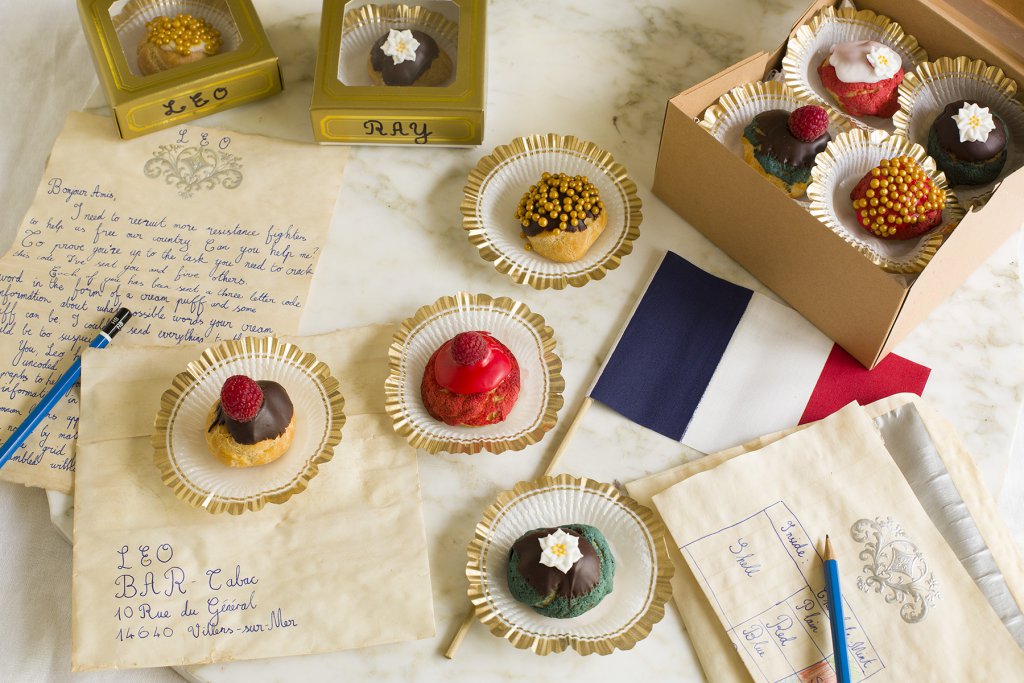 M: Had you created board games in the past and if so, did you ever take any into production?

J: I have worked on some small board and card games myself, but I have not taken them into production. Last year I worked with Sensible Object on the prototype of the game When in Rome, an Alexa-powered board game. This is the first published board game I have been part of from start to finish.

M: Which game from your book is your personal favourite and why?

J: I think that all of the games have a special time and a place and I like them all. If you’re forcing me to pick one, I’d say The Patisserie Code because it is made with cream puffs/profiteroles that remind me of special days in my childhood. 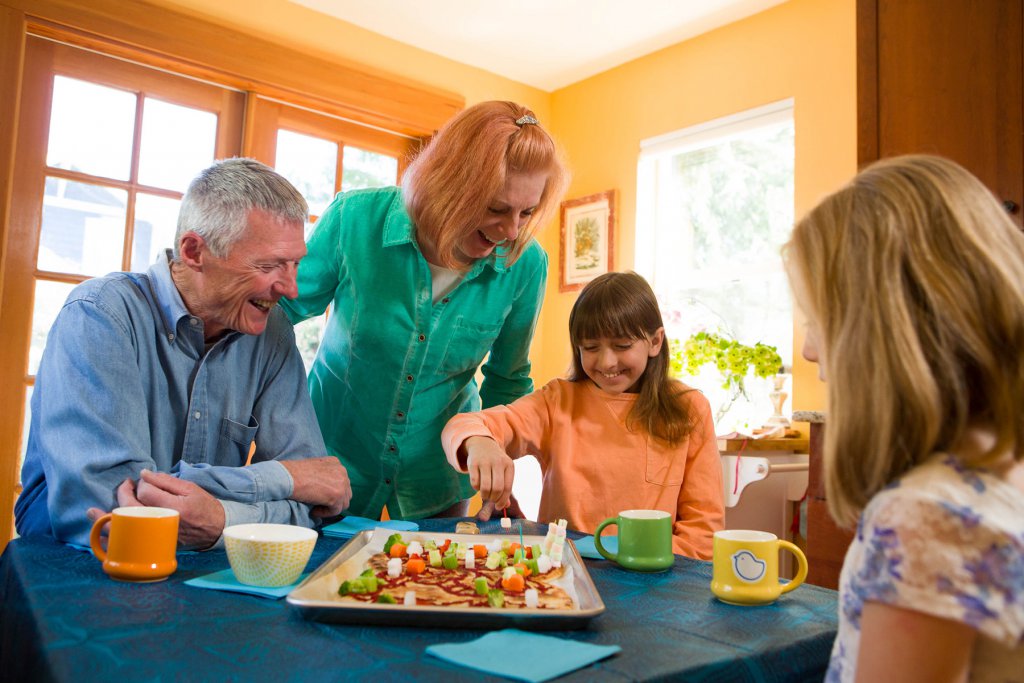 M: How close are you to having a complete book of games mapped out? Do you know if all of them will be sweet, savoury or potentially variable?

J: All of the twelve games have been playtested and prototyped. Three of the games have been fully implemented as chapters. I need to decide on the visual theme for each chapter, plan the photo shoots, get illustrations for each chapter and put that together. I also need to send out both the recipes and rules for more thorough testing to confirm that the text supports the games. Pretty much any of the recipes can be modified to be sweet or savoury and I’ll have instructions on how to do that within the cookbook.

M: How did you find balancing baking things completely versus purchasing everything pre-made so that people could get right into the game?

J: Every game starts with a basic level of how I see it working and this gives it a rating out of three oven mitts as to how difficult the game is to bake. From there, I offer adjustments to add more or less work for yourself. For readers it’s up to them to decide whether they want to put in more or less work, so they’re doing some of that balancing themselves. Obviously the games will be more impressive the more time you spend creating them — that goes for most things. But the games can be enjoyed even if you put in the bare minimum of time. 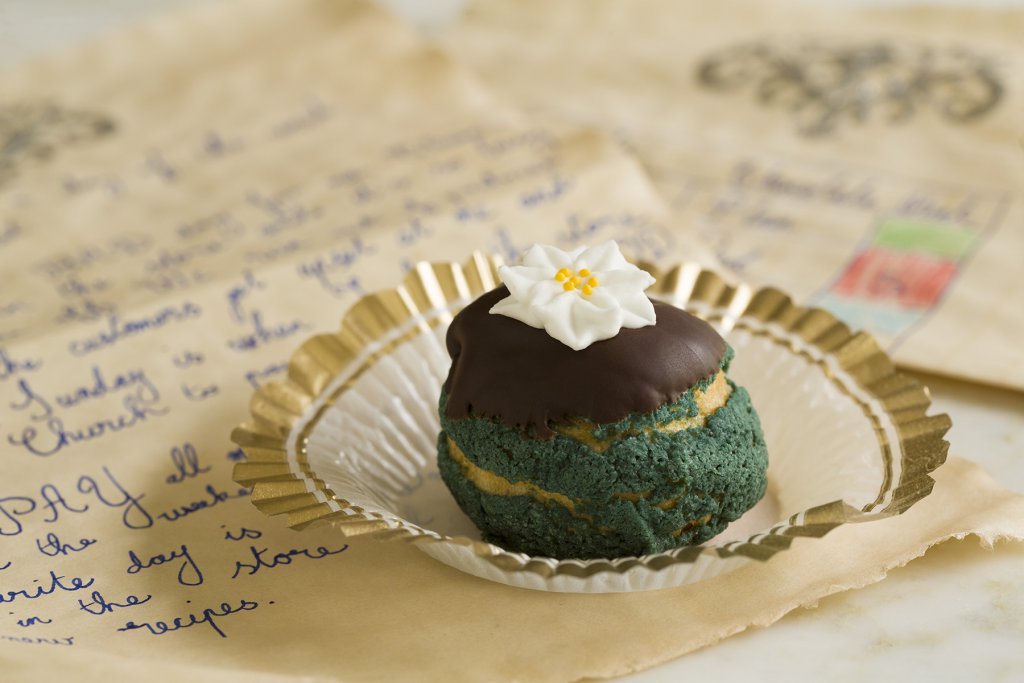 M: Is the intention to create recipes/games that will be as close to 100% edible as possible, and what will player-bakers need (i.e. are there any bespoke cutters, equipment or ingredients needed)?

J: Many of the games are pretty much 100% edible. However, some games have questions, ‘rituals’, or other text that is in the book. The idea is that you can simply use the book as it is, but if you want to put in extra time you create a deck of cards or a little book or whatever else you might want to create a more impressive game. All of the recipes have ways to make the games with very few specialised utensils. The custom extras in the Gourmand Edition (one of the backer reward tiers) help make the games more themed to match with what’s in the book. 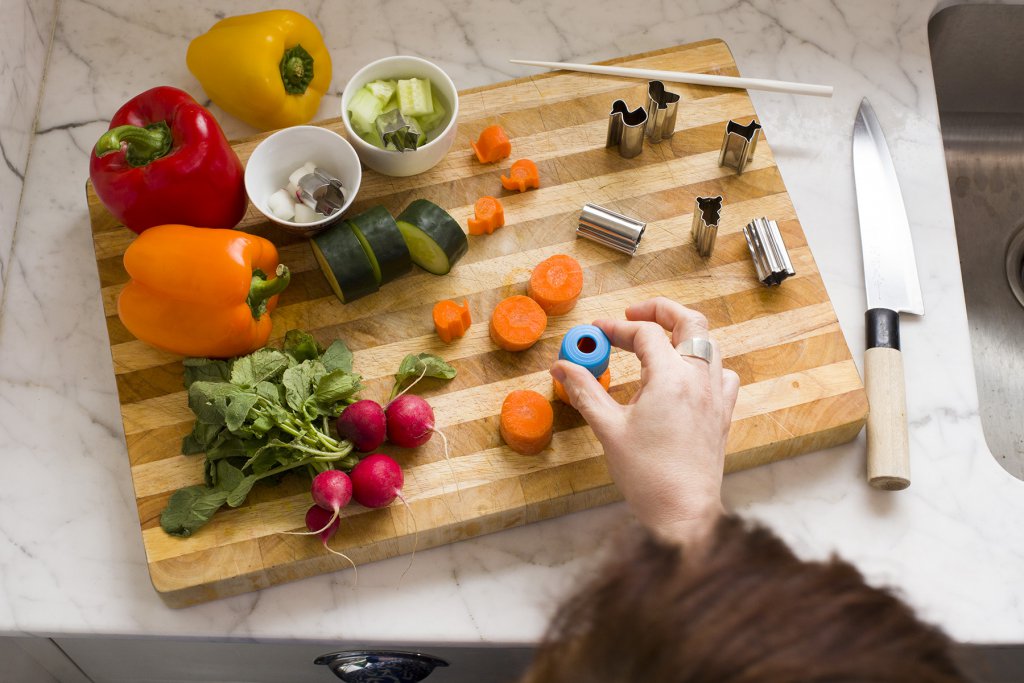 M: What level of complexity are you aiming for in the actual games and the recipes themselves? Is the Edible Games Cookbook aimed at any particular age or skill level?

J: The games are all very easy-to-learn games. They’re intended for all ages and novice board gamers will be able to pick them up and understand how to play quickly. Some of the games are more intentionally aimed at kids or adults, but I offer instructions on how to modify the rules to suit the group you’re playing with.

M: What do you think will be next for you — more board (or at least physical) games, or will you switch back to video games? Is it viable to consider running both options in parallel?

J: I’m not looking that far ahead right now. I’m currently just concentrating on this Kickstarter campaign. Once that’s over I’ll concentrate on finishing development of the book. Depending on how that whole process goes I’ll work out what I want to do next. If the cookbook gets good feedback and people are still hungry for edible games, I’d love to make more! 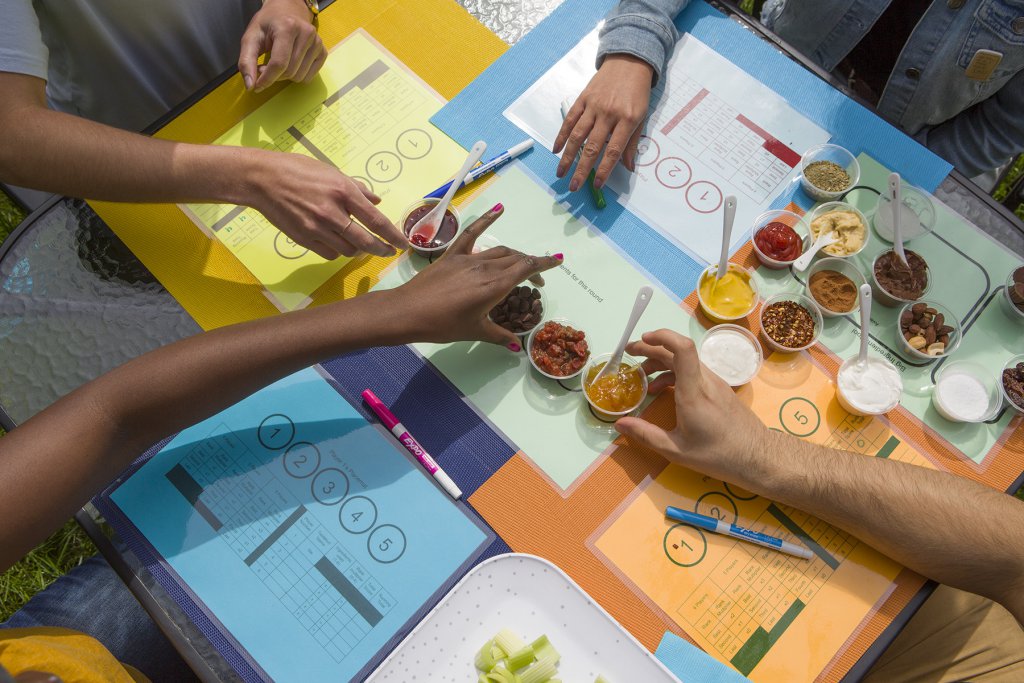 I’m now even more excited about what the Edible Games Cookbook has to offer, especially considering that it sounds like there will be a lot of potential to vary recipes to suit individual tastes and requirements. You may have noticed that I neglected to ask Jenn about the suitability of her games for vegetarian bakers, or those with dietary requirements, but you can rest assured that I have sent in a follow-up question and will provide an update as soon as possible. The Kickstarter page confirms that these options will be available.

If you like the look of the Edible Games Cookbook and you’re a fan of the idea of being able to bake, play and eat your own games, perhaps you’d like to back the book on Kickstarter. If so, it is live until the 20th of July. I’m hopeful that we’ll be able to bring you a detailed review of the book in the future, but for now I can confirm that the recipe we have seen is straightforward to make, whilst the game itself looks simple and fun — I hope to report more once the team has done some baking!