Our tabletop group has been known to primarily play physical, tabletop games. However, from time to time, we love trying these sorts of digital tabletop games that act a lot like escape rooms or like murder mysteries, which you can do from the comfort of your home. Isklander is a multi-chapter series, where you and up to five of your friends can come together to solve a mystery.

We joined up with our group and some extra people to take on the first chapter, Isklander Plymouth Point. This is the second digital event we have done, and it was quite different from the first, to be honest! We started off as members of neighborhood watch, with a person not from our group addressing us and telling us about a missing woman who lived in the building. Something bad was happening in her life, particularly around work, and we needed to check in on her and see what was going on. 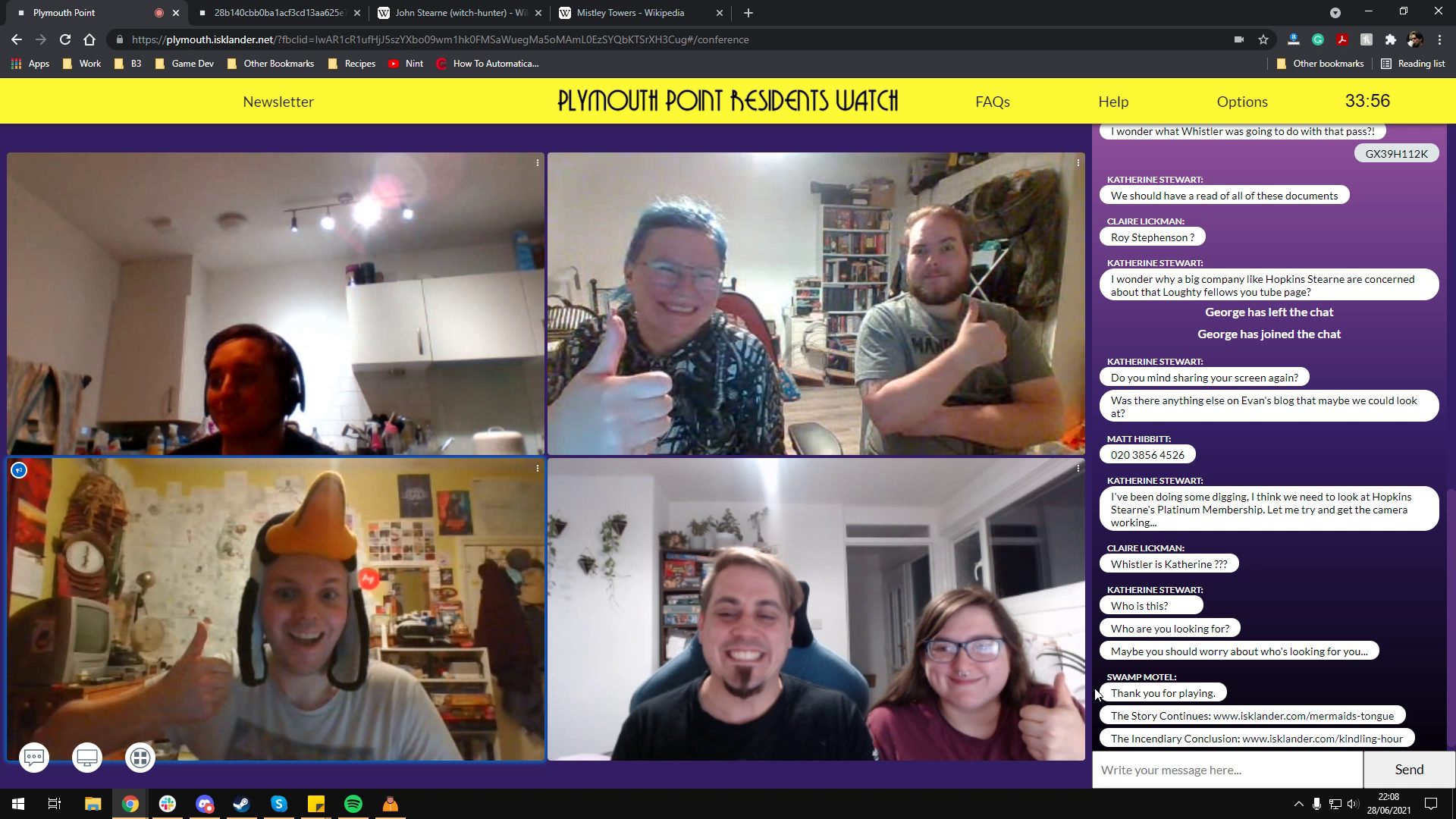 In this online murder mystery, we actually accessed real websites and local history to the area that we were meant to be in, seeing actual restaurants (that one of the members of our group had been in just that week) and real historical information for the town. This was one of the unique and interesting points of this game — with all of the internet to explore, you can easily over analyse and find yourself in completely the wrong direction.

On the other hand, the connection to history and local areas brought a lot of character to the game and did make it feel like real life. The story was interesting, with twists and turns. From finding this person’s Facebook page, to hacking into an email, to calling up numbers and typing in codes to hear information and get clues. There were even audio files for us to listen to — lots to find and discover.

My only real complaint about this game, as compared to the previous game that we played, was that the person hired to play with us was completely recorded. She did not react to anything that we said, and very quickly turned off her camera, becoming a bit of a helper in chat when we were drifting too far into the internet abis. For me, not having someone play with us and interact with us was a bit strange, especially as sometimes we would react to her video and get nothing, as if she couldn’t hear us. The end video’s loop also wasn’t as good as one would want, blacking itself out for a second before pinging back to life.

But, Isklander Plymouth Point ends on a cliffhanger. It doesn’t feel satisfying and is clearly made in a way that makes you want to play the next chapter, as this one ends on a giant twist. It’s a thriller, and as it’s made to be a thriller, you want to continue to find out what else is going on. The rest of our group was instantly trying to book up the next chapter, excited to see what else was in store and properly figure out this mystery — and I feel that we will probably be playing it soon, as the story itself is well presented and well written.

You can find Isklander Plymouth Point on their website.