Inua — A Story in Ice and Time is a moving point and click tale from ARTE FRANCE. It fuses magical realism with the historical events of the Franklin Expedition. This results in a story with elements of Inuit traditions and one that covers the effects of colonialism.

The story of Inua follows three people across three timelines — Taïna, Peter and Simon, each separated by decades. Taïna is a journalist in the modern age, chronicling the story of the Franklin Expedition. She is invited aboard the research ship as it pulls the remains of the HMS Terror from the depths of the Canada’s waters.

She is taken aback by the standoffishness of the head researcher of Parks Canada, who begrudgingly allowed her onboard as part of PR efforts — though it is obvious he is only interested in the research, and brushes Taïna’s questions off as best as he could.

This pushes Taïna to gather as much info as possible from other sources, which leads us to the next part of the story — Simon’s. A part of the HMS Terror, he organises a mutiny as the stranded ship’s captain — Sir John Franklin, refuses to budge — hubris taking hold of him. The crew abandons ship and drags their belongings across the frozen wilderness, where they are beset by hypothermia and a lack of food.

Simon soon makes friends with the Inuit people, and the two groups form an alliance. Several of the Inuits are distrusting of the explorers as they are of them. Simon’s efforts to connect the two groups finally pays off — they reach a coniferous forest and a party soon takes place. In between this, we are introduced to our final character — Peter.

Peter is a photographer employed by the US Army to photograph geological deposits, but soon finds himself at the behest of the less than friendly expedition members. They forbade him to follow them, but they soon allow him to wander off to photograph some rocks nearby. He soon meets Nuna, the grandmother of Natar (in Taïna’s timeline), and asks her about the crater they were interested in.

She told him that it was cursed, and attempted to dissuade him from going. His camera is also taken away, and he soon finds out that his presence was merely a cover to see if the crash site was an enemy missile — this being during the time of the Cold War. He enlists the young Inuit girl’s help, and gets his camera back.

His interest in the crater only heightened, he insists on going, despite the girl’s warnings. The army expedition, who were worried about him, placed a flare in the hopes he would return home with them. Though by this point, Peter was so enamoured by the crater that he went ahead regardless. 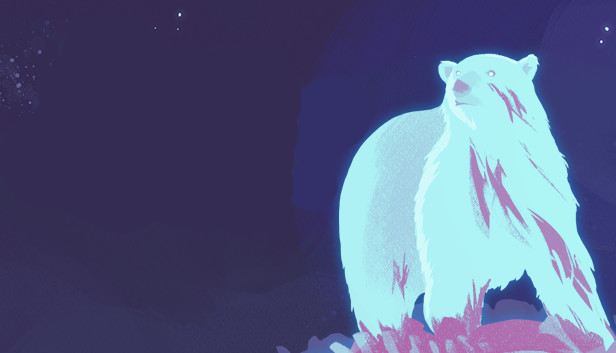 All the while interspersed between chapters is the story of Inua, the bear deity of Inuit tradition, and the tale of the three hunters. It drew an eerie parallel between Taïna, Simon, and Peter — and each progressive step of their respective journeys followed various constellations.

Players are allowed insight into the minds of various characters, and by collecting symbols — unlock story progression and character motivations. The three protagonists soon come to a head, as the story of Inua and the three hunters draw to a close. Turns out shooting a rusty cannon at nothing meant your hubris was so far gone, as was with uncovering the story of the crater and expedition. As they meet one last time, their lives are taken — symbolic of the blinding desire of the three hunters against Inua.

Overall, Inua was a great game with gorgeous visuals and an engaging story mechanic. I soon found myself thinking about how blinding desire can be — even more so in this age. What’s more is an Inuit writer was brought on board, to help them tell Inua’s tale respectfully. As the credits rolled, I took comfort in the fact that I have to learn from history’s past mistakes, lest I be doomed to repeat it.

Grab Inua on Steam, iOS, Android, and Switch. Don’t forget to visit the ARTE website and the game’s Twitter for more info.