Immortal Redneck is an interesting game, and the PC version — which released earlier in the year — quickly became my favourite game of recent times. Which is odd, as I am not a fan of roguelikes, and hate dying in games. And you will die, a lot, in Immortal Redneck.

However, within playing one run of a friend’s copy of the game, I had bought it for myself, and have played it for a good 40 hours since on the PC. So, when I was offered the chance of playing the Switch version, I jumped at the opportunity. Taking this experience on the go would be golden.

Immortal Redneck is a fast-paced, roguelike FPS in which you take control of the titular redneck, somehow reincarnated in ancient Egypt, in the shadow of three pyramids. Right off the bat, you will be cast into the pyramid directly ahead of you, and you get right into the the action.

Each room in Immortal Redneck is randomly selected from a fairly large pool of rooms, with a semi-random selection of enemies (rooms tend to have certain monster types, but numbers can vary), and random doors. Each time you enter a room you cannot leave until it’s been cleared out of enemies. Then, you pick a door and move on. This is the basic loop of the game, but, it is done with such a style, that it makes it hard to put down.

The game runs at a fair lick and in certain rooms you cannot help but simply run. Monsters will spawn in from the second you enter the room, giving you no time to scope the room out first — just to grab your gun and blast away. Blast even faster by using the Redneck’s special ability which temporary speeds up your attack. This is made a joy with the game’s especially fluid movement, which is just as fast as Serious Sam or Unreal Tournament. Sprinting, double (or triple) jumping about the place makes getting anywhere you need to a breeze, and in some of the more vertical rooms, is just so much fun. 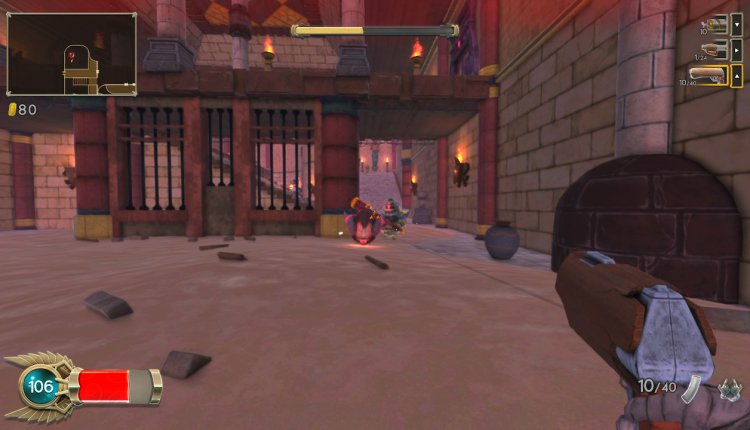 The guns are are solid and varied, and all feel great to use. From your standard pistols and machine guns, to fireworks launchers, and gloves that fire electric balls of energy. There is something for everyone, and even a few Melee weapons (but I would personally not recommend them).

The monsters are also fairly varied, and you will quickly learn that size and look means nothing to what little blighters can do, and for me at least, the smaller they are, the more of a pain they are to deal with. Worst being the little, blue dinosaur things that turn the ground into a hail of slime bullets; it’s like something straight out of a bullet hell shooter. Defeated monsters will drop a variety of things, from coins, ammo boxes, meat for health, and on rare occasions, weapons and scrolls — I will come to the scrolls later. You will also find, as you continue to play, that certain weapons work better on certain enemies.

Each pyramid, also has a mid boss, and an end boss. These are sufficiently challenging, and it is always a most satisfying time when you best one.

Here’s the rub through. A lot of the time, you may not know what guns you will have in any given situation. Yes, you start with the weapons of your God (I’ll get to this) but you will find more as you play, and as you can only hold a certain amount, choices have to be made. Do I dump the grenade launcher for a sniper rifle? Drop the pistol for the energy glove?

Then, with all of that considered, there comes the scrolls. 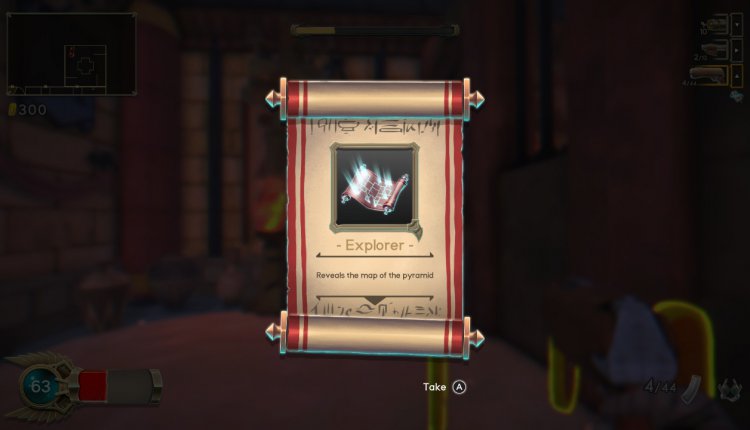 Oh, the scrolls… Collecting these scrolls gives you a random buff or a nerf, sometimes, turning you into an unstoppable killing machine, and sometimes giving you something so bad that it is simply not worth continuing. Some are a bit of both, some are just fun. Here are some examples.

And so, you run from room to room, clearing out the enemies, earning cash, and moving up floors, until you die.

Death, as it turns out, is just the beginning. Now, you get to take a look at the skill tree. Starting with just one option — which increases your attack strength — you can begin unlocking upgrades, which then persist through any future run. They start off cheap, and get more expensive as you go, as each upgrade will have a number of levels which you can go through, incrementally increasing the stat, and also unlocking further “branches” of the skill tree. 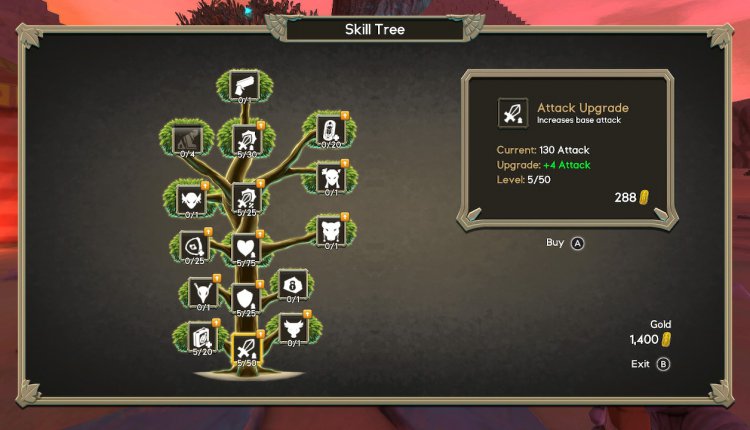 Also on this tree are the Favours of the Gods. These offer you a different load-out of weapons, differing initial stats, and different special abilities. Each favour also has a further upgrade, one which is usually quite expensive, but have overwhelming shifts to the classes, which I will leave for you to discover.

Now, here at Big Boss Battle, we have already looked at two versions of Immortal Redneck, once on PC, and once on Xbox One. So, how does it stack up on the plucky little Nintendo hybrid? Pretty damn well, if I do say so myself. Obviously there are a few provisions made, but nothing groundbreaking, and it also adds a feature that neither of the other versions had, but I’ll get to that in a bit.

Let’s start with the graphics. Gone is the rather nice, albeit not all that important, grain filter. I enjoy this on the PC version, but it is not a great loss. However, as I use my Switch primarily in docked mode, I am not sure if it is hitting 720P. Docked mode did seem to be though, and that’s fine, but while docked the game suffers from that slight blur which other titles have suffered, like DOOM.

Fair enough, an acceptable trade off for some portable fun.

For the controls, Immortal Redneck is standard FPS fare, but motion aiming is added; this is an invaluable addition to any Switch shooter, and something that should be included whenever possible. It really adds the granular and sensitive aiming that console control schemes lack. This was tested with both the Joycons, and the 8BitDo SFC30Pro controller, and was fantastic on both.

Auto Aim is also on, to combat limitations, and this does really help, as hitting those annoying little frogs while double-jumping over another enemy would be nigh on impossible without it. 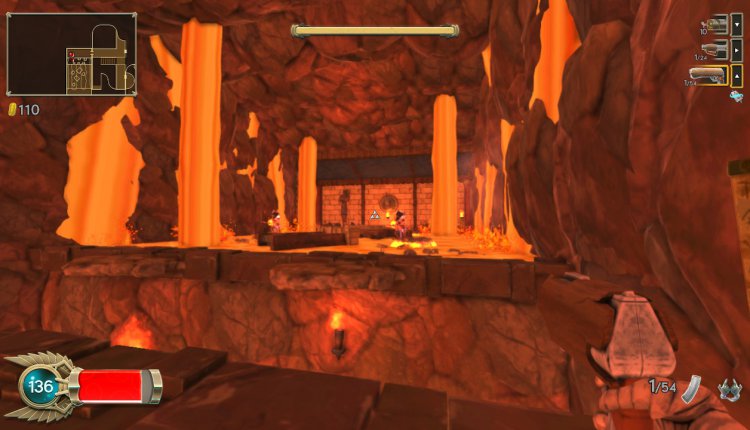 The only missing features are things that I have not really used anyway; different game modes and Twitch integration. The latter is completely understandable, but I think leaving out the Daily and Weekly challenges is a bit short-sighted, as it adds a competitive bent to an inherently single player experience, also adding a kind-of high score table.

Overall, despite the minor gripes — which could get better with patches over time — it’s a great port. Immortal Redneck on the Nintendo Switch is well worth the price tag, even if you have the PC version, not least just so that you can take it on the go.