Human Fall Flat is a strange one — I’ll just get that out of the way up front — but that’s not a bad thing. It comes from No Brakes Games and is published by Curve Digital; it’s also the latest indie darling to make its way to the Switch for some semi-portable fun times. 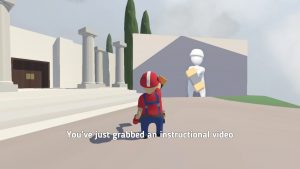 At its heart, it is a puzzle platformer with a simple premise: get to the exit. But this has a twist: everything is based on a stylised, physics-based movement system. You control Bob, who is to a human what a jelly would be to a cake — he’s got the general shape right, but is a wobbly mess.

Upon pressing start in the title screen, which already sees your player character in an infinite fall, you are dropped into the first level. You land with a satisfying plop and then, within a moment, Bob wanders off in whichever direction you currently hold the stick in.

Each of the worlds seem to revolve around a certain mechanic. First, you’re just pressing buttons to get you used to controlling your arms, then Human Fall Flat moves you on to manipulating boxes, then jumping and climbing. More elements come later, but I’d rather not give everything away. It’s smart in its tutelage as well, with the game teaching you alternative uses for objects which have been present from the start, such as lamps you can swing on. Afterward you play through the game again and, with the knowledge gained in the later levels, you find a part in an earlier level you can climb up to, swing on a rope and find a new route previously hidden. It really is a game which rewards replays. 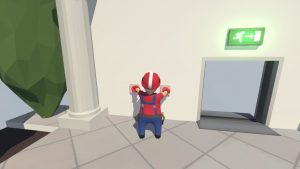 Human Fall Flat’s controls are rather simple. You have your movement on the left stick and view on the right, like any standard third-person game, with jump on A. It gets interesting when it comes to the triggers. Each of them controls the associated arm and upon pulling them, that arm shoots out in the direction you are facing and sticks to anything it comes into contact with. I would say grab, but as you can attach yourself to completely smooth walls, ‘stick’ seems more appropriate. There also seems to be a button that causes you to flop onto the floor. So far, I have not seen a purpose for this. These controls are surprisingly versatile. Picking things up, grabbing ledges, pushing things about… everything you need to be able to do, you can.

And the best thing, is that even though you have the ability to do all these things right from the start of the game, they do open up gradually throughout the course of the game, via the use of remotes. The first of these is right in front of you in the first level. Once touched, A screen shows up in the game world, and plays a video explaining the mechanics of the game. This means that after your first playthrough you will notice different ways to do certain levels, and the designers, obviously, and consciously, knew this, and put in a variety of solutions for each level. This means that, on replays, you will even find ways of totally skipping parts of the game. For example, I did not know I could jump until the game specifically told me I could—I just had not tried pressing the buttons randomly at that point. 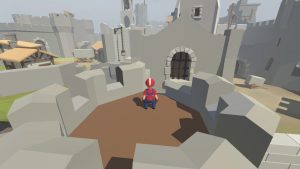 The graphics are simple yet vibrant, with most things simply flat shaded and low-poly models. Only certain objects have textures, like the boxes you can move. Not only does this give the game a nice, clean look, but it also helps, on quite a few occasions, to draw your attention to where you need to go. Even Bob, the player character, is totally flat white at the start — unless you choose to customise him on the menu screen first. And Bob, seeing as he is made from 95% jelly, probably has more geometry than most of the levels.

Sound is also very minimalist, with just a few stings of music here and there. Even when audible, they blur into the background so you barely notice them. This is not a negative; it fits with the general style of Human Fall Flat.

The sound effects, though, are damn near perfect. From satisfying sticky sounds when you grab things and metallic grinding as you move things about to the splat when you hit the ground of a new level, everything fits together perfectly.

But now I must bring something up. I mentioned earlier that I had not played this game before, even though it came out over a year earlier on PC. On my first run with Human Fall Flat, I got to the jumping and climbing section and had a hellish time getting to grips with the controls. I could not climb up on anything, I just could not get it. I looked to see if anyone else had the same issue and found countless videos of people just hopping up these climbs with no issue. It didn’t take me long to form a conclusion on the issue.

They were playing on PC. 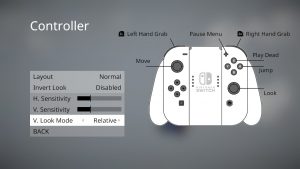 So, experiments had to be made. Got the PC version, finished it, no problems. I went back to the Switch version and was still having issues with certain climbs. So I delved into the control settings to see if there would be any respite there. There was: vertical look mode. This has two options: follow stick or relative. By default, this is set to follow stick. Meaning, like the analogue stick itself, your view will recenter when you let go of the stick — maybe to press jump. This was the issue. Once I changed this to relative, I could finally do the climbs and jumps that I needed to. This really should have been the default option. Another option available — and I think this would have actually worked better — is that they could have added motion control. Yeah, I hear you groaning, but I really feel like it could have worked for this game*.

The only other incredibly minor issue is that sometimes you can “become one” with the level geometry. This seems bound to happen in a heavily physics-based game and it happens so rarely that really, it can be overlooked, yet it was most definitely present. 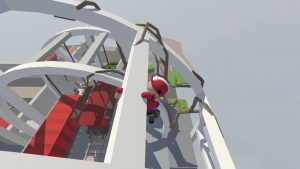 Overall, Human Fall Flat is a fun game and can be replayed many times, finding different routes through the puzzles. To make things even easier for yourself, a second player can join in for some co-op fun.

For fifteen quid, it’s great fun. Go on, you know you want to!

*Update : Between this review being written and it going live, an update was released that allows split joycon use for co-op, with motion control, so there you are.